Hopefully Child Protective Services is not reading this, as once again we saw the words “dangerous” and “beach” in our guidebook for Kauai and couldn’t resist. We were looking for something to do and just down the road from where we were staying in Princeville was Hideaways Beach. The beach itself was not dangerous and was said to be very beautiful and without crowds. The reason for the lack of crowds and the part that made it “dangerous” was the path leading down to the beach. It starts off with the rusty remnants of metal handrails, which are more hazardous than they are helpful. Good thing we all had our tetanus shots up to date. There must have been stairs at one time, but they eroded away. Strung along the large gaps in the railing was whatever frayed rope, string, and electrical cable (seriously!) people could scrounge up to offer anthing to grab onto to keep you from plummeting the remainder of the 120 vertical feet to the beach below. The steep descent of the root-covered trail leads to a sheer drop-off with your first glimpse of Hideways Beach. A cute alcove with gentle waves lapping at the sandy beach, and the best part… only four people on the whole beach. We enjoyed the day there playing in the water and lounging on the beach. For a beach so close to one of the most populated areas of Kauai’s north shore, this hard to get to beach was a nice find and was well worth the effort to get to it.

Queen’s Bath on Kauai’s North Shore is supposed to be an amazing place to go snorkeling and swimming. It is also one of Kauai’s most dangerous places to visit killing numerous people that have visited there. Since it is located in Princeville it was just a short walk down the road from where we were staying and we thought we would go check it out. How dangerous could it be, right?

After strolling through a residential neighborhood we came to the trailhead that would lead to Queen’s Bath. The trail followed a stream that would occasionally drop off into a picturesque waterfall. We continued down the trail over rocks and roots, a bit of a scramble in parts, and finally emerged at the bottom where it opened out onto a rugged lava shelf dropping off into breaking waves. Looking down I immediately noticed a slab of wood with a warning about Queen’s Bath carved into it. 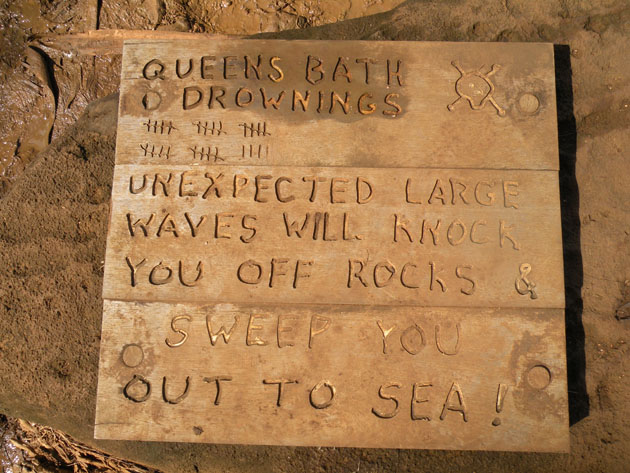 I was expecting Kerri to comment about the warning sign, as she was looking rather uneasy about the walk we would have to do along the “dangerous” lava shelf to get out to Queen’s Bath. But hearing no complaints, Sydney and I started out parallel to the breaking waves against the rugged lava edge. I warned Sydney about the dangers of breaking waves and told her to NEVER turn her back on the ocean and ALWAYS have a way out. Looking back, we saw Kerri lagging behind and looking even more uneasy, which was understandable. This was not a place to be when the ocean was not perfectly calm. We waited for her to catch up and continued out along the ledge passing numerous warning signs about the dangers of being there.

Once out at Queen’s Bath we found a group of people standing along the edge, which went against the warnings, and nobody was swimming or snorkeling. Large waves were coming up over the edge and spilling into the pool of Queen’s Bath, while others were breaking hard against the shelf. Not a very safe place to be. We stood back in an area that offered a quick escape while expecting at any moment for a sneaker wave to come and rip someone from the shelf. Fortunately, that didn’t happen.

We made our way back out along the lava shelf and back up the trail to the calm of the residential neighborhood unscathed. Queen’s Bath was a great place to visit, but I would not dare to go swimming or snorkeling there unless it was a perfectly calm day. Maybe another time.