Two nights ago I was in the kitchen when I heard a loud CRACK sound from the living room. I went to the living room and looked around and noticed that the cat had been woken from his nap by the noise and was also looking around. I could not find anything that would have caused that noise and dismissed it, but was still puzzled. Yesterday after getting home from work I opened the blinds to the large window in our living room and noticed that the window was all cracked. I then noticed what looked to be a small caliber bullet hole and ran to the back of the house to see where the bullet went.  Not seeing anything I went back to the window to see if both panes of glass had been shot through and noticed that it was only the front pane that had been broken. I went outside and noticed a good sized steel BB in between the window and the screen and then checked around for other damage and noticed that our Nissan Xterra, which was parked in the street in front of our house, had also been shot and had a nice dent in the door with paint damage. I called the police and made a report with them and was surprisingly not mad. I mean, who should I be mad at? Instead of anger I felt shock and confusion. Why would somebody do something like that? Why us?

I contacted our insurance company today and spoke with them about the damage. Our auto policy has a $120 deductible and our house has a $500 deductible, but a new window will probably cost around $300. So, we must pay around $420 out of pocket because some stupid kids (or adults) thought it would be funny to go around shooting their BB gun at people’s houses and vehicles. We have been living on a tight budget so we can make the trip of a lifetime in a few months and the last thing we need are unexpected events that take away from our savings. We can’t go until we have enough money saved up and hopefully this won’t delay our trip. At least nobody was hurt… 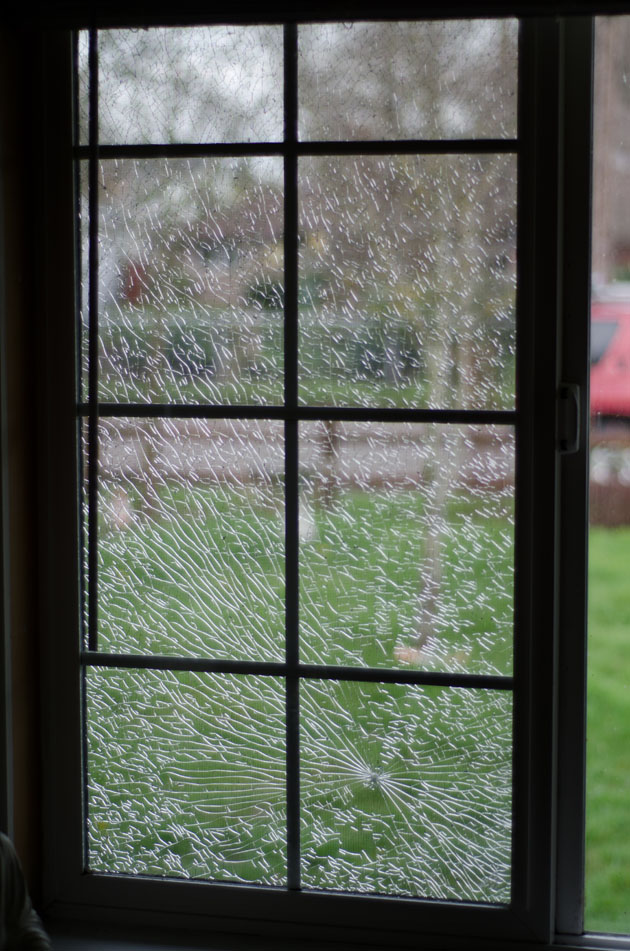 Damage on the door of our Nissan Xterra