My family gets together every couple of years for a family reunion.  For each family reunion we choose a different location around the Western half of the United States and were really excited that the family had chosen Glacier National Park for this years get together.  Jason and I have never been to Montana before and were looking forward to seeing a new place.  In fact, Jason told me on the trip out that besides Crater Lake (Oregon’s only National Park) he has not been to another National Park.   In planning for our trip, we had noted that the drive from Portland to Glacier is approximately 11 hours,  We decided to break it up so that we could have plenty of time to stop and explore.  After rushing around to complete all the last minute house projects we hurriedly jammed some stuff in our bags and were off.  Unfortunately in the haste, I forgot many essentials such as my prescription sun glasses.  I have since regretted packing so hastily as the Montana sun is very bright.  It was weird leaving, as this is the first road trip without Sydney since she was born.  Sydney had been visiting with my parents in New Mexico with the plan that they would be bringing her up to Glacier.  The first evening, we drove up to Spokane and arrived around midnight.  I am glad that we broke the day up as the first part of the drive was partly in the dark. Though, the Columbia River Gorge has some pretty views, the freeway quickly leaves the scenic gorge and enters into dry rolling hills of sage and farm fields.  We have done the drive multiple times along I-84 and both find it boring.

The next day we were off again.  After leaving Spokane, the scenery gradually gives way to high mountain pine forest and is beautiful.  We purposefully planned our route to go through Priest River, a slight detour from the most direct route to Glacier from Spokane.  30 years ago, Jason’s family owned 5 acres of thickly forested land near Priest River and has some great memories of exploring the area when he was 11.  When we arrived at Priest River, Jason attempted to find the unimproved road that the property was located on, but unfortunately we were not able to locate it.  He remembers the Priest River as being the clearest river he has ever seen with specs of fools gold sparkling as it drifted by in the current and being able to clearly see the brook trout 10 feet down on the bottom. People were living in school buses and walking around with rifles because of all the grizzly bears. The area has really changed and now has lots of nice modern houses and cabins, and no more school buses. After our unsuccessful attempt to locate the  property, we took a break and enjoyed dipping our feet into the icy cold river.  This was refreshing as the temperature was 90 degrees and the sun was intense. 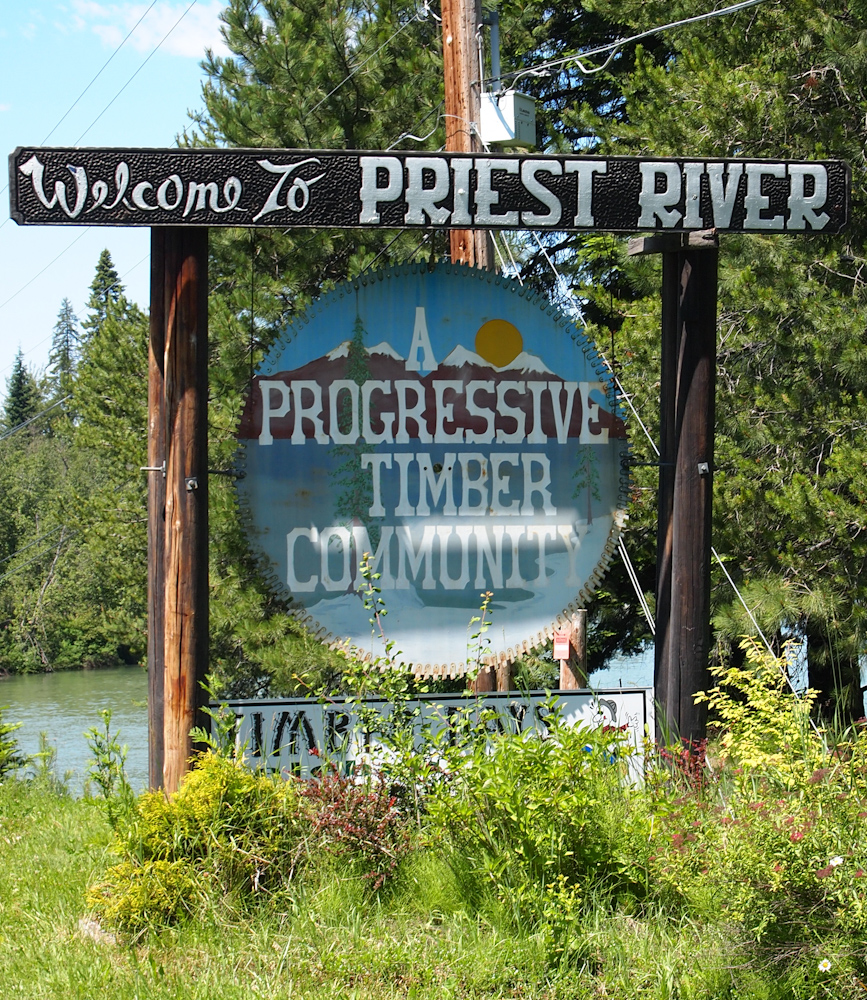 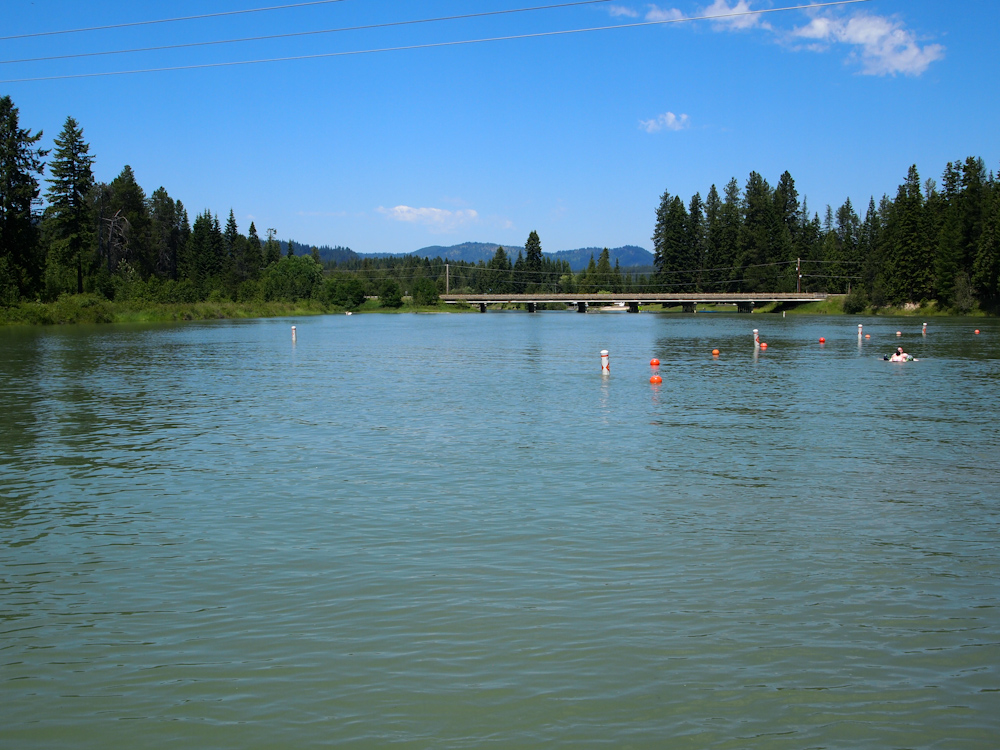 Priest River. Not as clear as it was 30 years ago. 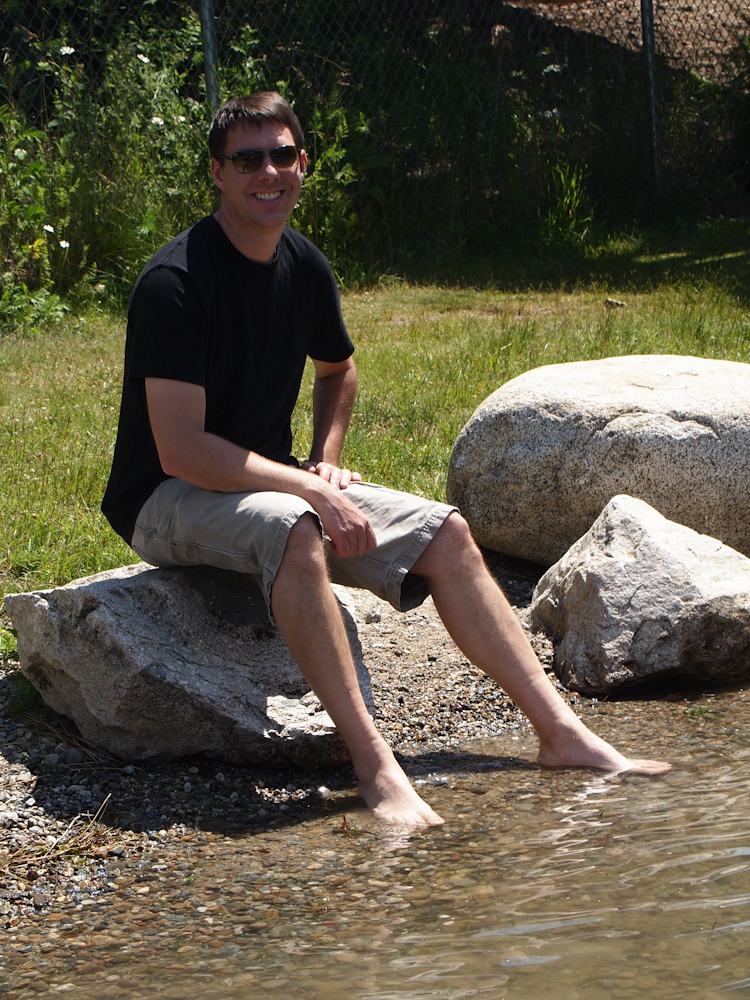 Cooling off in the Priest River

After we entered into Montana we noticed a pull out along the roadway up in the mountains along highway 2.  The car thermometer was showing 100 degrees outside but we decided to stop anyways. We were just going to stop to stretch our legs as it was so hot, but noticed  a sign for Kootenai Waterfall and hanging bridge.  After a short hot walk, we arrived at the falls.  The pictures do not do it justice.  The amount of force of water was impressive and the spray lowered the temperature at least 20 degrees.   We enjoyed the falls for a while and then walked to the hanging bridge.  The hanging bridge hangs across above the rushing river.  It has a sign that limits to only 5 people at a time on the bridge.  We did not walk all the way across the bridge as the swing of the bridge and gaps between the boards was unnerving.  The stop and hike was a great decision and we got to enjoy some of the beautiful scenery of Montana. 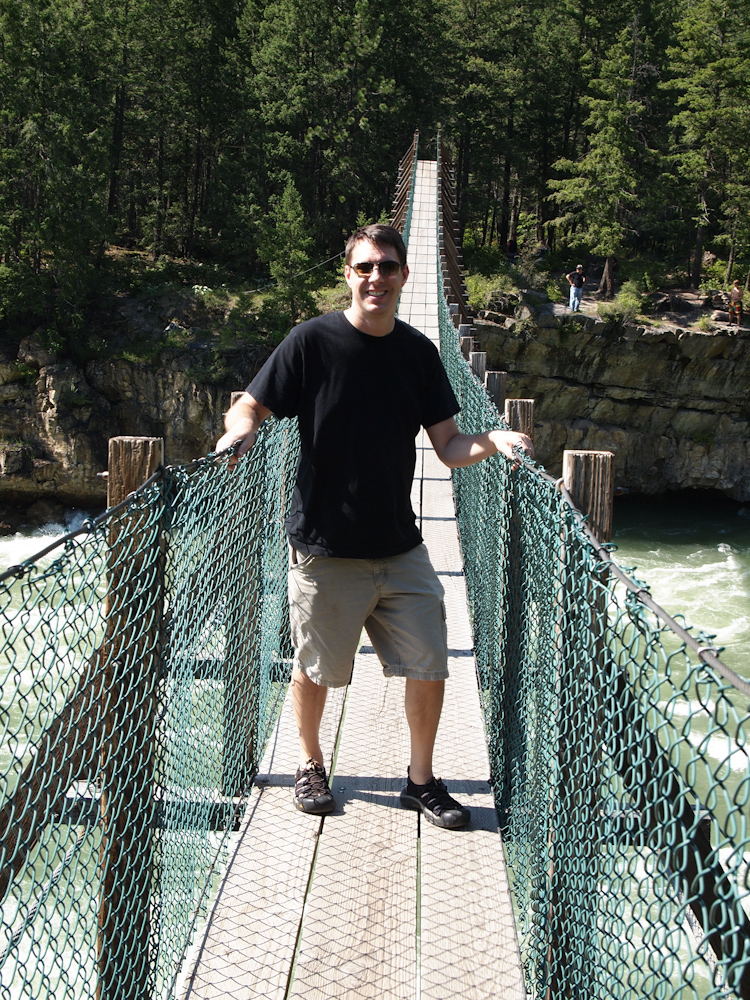 Jason on the swinging bridge. And yes, it does swing!

Awhile later we arrived at our destination in Columbia Falls, 15 miles from Glacier National Park.  It was great to see our daughter Sydney after two weeks without her and also to see family.  I look forward to our trip back, as we are planning to take a different route home.  The sites and scenery along the road alone has been well worth the trip to Glacier.