Right after purchasing our house, 12 years ago, we stopped at Home Depot to buy house-remodeling supplies; something that would become a common occurrence. I can’t remember exactly what we were buying on that day, but as we walked towards the front doors we came across a lady with a box of free kittens. Not able to resist, we stopped and peeked inside the box at the cute little fur balls. One of the kittens stood out from the others. The first thing that set him apart was that he was an orange tabby, while his siblings were shades of gray, black, and white. The second thing that set him apart was the fact that he had seven toes on his front paws. Multi-toed cats, or more commonly referred to as polydactyl or Hemmingway cats, are curious freaks of nature, but not too uncommon. But we had never seen a 7-toed cat before. He was definitely unique. Kerri said something about getting him, but I shrugged it off and said we already had one cat and a dog and started heading into the store. As we entered, I looked down and noticed Kerri was still holding the 7-toed orange freak. I really put my foot down this time and told her to return him. Reluctantly, she turned and walked out to return him to the box and I started searching for what we had come to purchase. She caught up with me a few minutes later still holding the cat. She said that the lady with the box was gone. To this day I am not sure if that was the truth or just a convenient way to get another cat. But, we took him home and named him Spock. He was named after the famous Star Trek Vulcan as the orange polydactyl had an opposable “thumb” that looked like the “live long and prosper” V-shaped hand gesture. 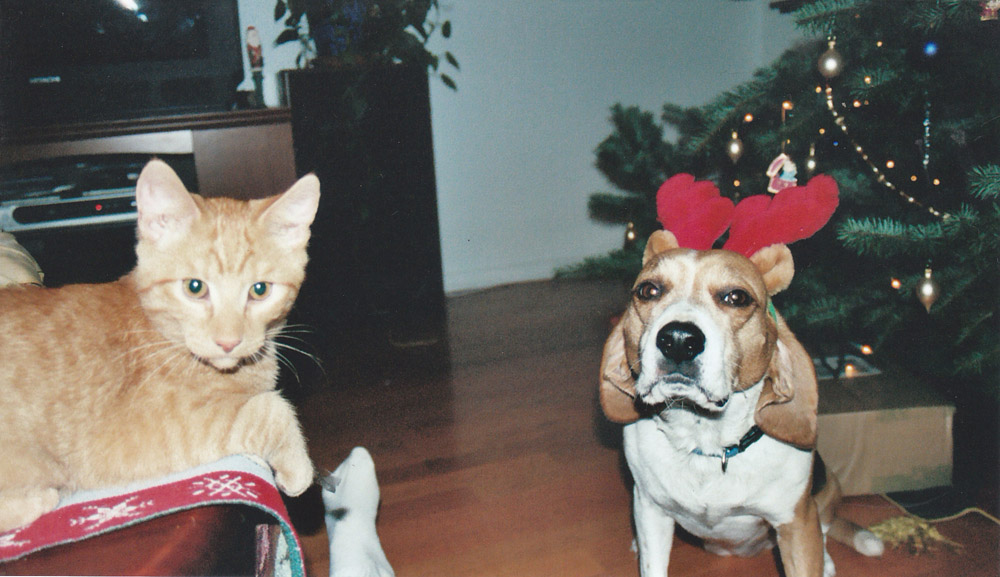 As a kitten he was a terror! He would spray inside the house, beat up our other cat, and scratch the furniture. I contemplated getting rid of him on several occasions, and almost went through with it. We finally had him neutered and shortly after that, our other cat, Gilbert, died suddenly from a blood clot. It was either the neutering or the shock of watching his friend get buried in the backyard, but all of a sudden Spock became the nicest cuddly cat ever.

Over the years Spock became the neighborhood Alpha male and developed a slight habit. He loved to eat birds! His oversized mitts were perfect for snatching birds out of the air and he would eat everything but the few feathers that fell out. I have had cats in the past that would leave a headless bird on the doorstep, but not him. He ate everything every time. Well, almost every time. Our neighbors across the street were bird lovers and had many bird feeders in their front yard. We nicknamed their bird feeders “cat feeders” as it was a popular spot for the neighborhood cats to hang out and wait for a crunchy snack to land at those feeders. One day our neighbor came over a bit “upset” as he found a dead bird that had been left on the front seat of his pickup truck. Our cat was blamed! But was it really him, or perhaps another “cat feeder” patron? The truth will never be known. Spock developed a bad reputation and nobody seemed to really like him but us.

As we got closer to going on our family around-the-world trip we had to figure out what to do with our cat. My uncle Gar, who happened to live on 20 acres in the country, offered to take him. Gar had been our house and pet sitter since we had purchased our house and had loved our pets as much as we did. In fact, our Beagle actually liked Gar more than she liked us. We thought Spock would love his new home living in the country with lots of crunchy birds to eat and plenty of free space to roam. When visiting Gar we had noticed other cats at the neighboring farms, so he could have friends. We knew he would have a very happy life there and Gar would take great care of him. We loved our cat so much, though, that we were really hoping to get him back after our travels and flying him out to wherever we decide to relocate to. But the thought of taking him back after a couple of years with Gar would probably be hard on my uncle and the cat, so we were thinking the best thing for both of them would be to let him live there and we would pay any vet bills that arose. And then the unexpected happened. Gar died 2 months ago after being hit head on by a drunk driver while out riding his motorcycle with a friend.

After Gar’s death my mom, who lives in Idaho, offered to take Spock. She already has a cat and two dogs and we wanted him to go to a good home so it seemed like a smart choice. After my uncle’s memorial Spock was placed inside an animal carrier and placed in my mom’s car for the trip back to Idaho. He seemed fine until the door was closed and then he looked scared. I asked them to roll down the window and we comforted him and told him we would see him in a few weeks. We watched our beloved cat head off down the street.

My mom gave us updates as they drove back to Idaho to assure us of his safety and after he got there. We felt bad about giving away a member of our family, but he was going to a good home and we would see him again. They kept us updated about how he was dealing with the other cat, which they became friends and even sent us videos. But the dogs did not like him.

A few days ago I had a dream about our cat, Spock. In the dream he got into a small tub of water and just sat there; something strange for a cat. I could not figure out what he was doing, but he seemed content. And then he was on the back patio of our old house wearing a black top hat and dancing around. The dream was very strange and I woke up wondering if Spock was okay. Later that day my mom let me know that Spock had ran away and they could not find him. I wondered if the dream was some kind of psychic connection of our cat looking for us. It has now been over a week and they still cannot find him. They have gone door-to-door, posted flyers, and online ads; yet nothing. Hopefully he has a new home with some kind people that will care for him. But, none-the-less, we plan on walking the neighborhood over there when stop to visit next month and hopefully he will come out and say goodbye before we fly overseas. He was a great cat and will be missed!