After many years of dreaming about round-the-world (RTW) travel, we finally set off one week ago on our own 2-year family adventure to do just that. Our first week has had its highs and lows and we find ourselves stuck in the transition from “normal life” to life on the road; neither here nor there and trying to find the rhythm of our new reality. A challenge all long-term travelers must face.

Boise: Different, but not that different

Since we are staying with relatives in Boise for the past week, it doesn’t feel any different than a normal visit here. When you think about “round the world travel” you imagine visiting places such as Europe, Africa, and Asia. Rarely do you picture yourself hanging out in the American suburbs surrounded by big box stores. But since we will be out of the country for the next 2 years, and longer if we can afford it, we really want to spend as much time as possible with family for the first month of the trip. Sydney is currently 8 years old, and while 2 years does not seem like a very long time for an adult, 2 years is currently 25% of our daughter’s age. For Sydney, 2 years is a very long time to not see her grandparents, aunts, uncles, and cousins. So, for the past week we have been surrounded by familiar people and places and nothing seems different. We so want to feel that feeling you get when visiting someplace new and exotic; that sense of culture shock you only get with international travel. But I don’t think we will be feeling that until we land in France on December 1st.

We have started to home school Sydney and have met with a few challenges. We purchased the highly recommended Saxon Math books, but chose to not get the massive teacher guides. I have a degree in Civil Engineering (lots of math) and Kerri has a minor in math; I think we can handle teaching 2nd and 3rd grade math. But Kerri suddenly had a change of heart and felt that we needed all the help we can get and decided that she was going to go buy the teacher guides. We had a bit of an argument over this, as there was no way I was going to lug around a couple of 5+ pound books around the world, especially when I felt we did not need them. We talked it over and came up with a solution that worked for both of us. We would have her continue to work in the Saxon workbooks, but supplement her math studies with online math tutorials, videos, and math games.

For her other studies, she has been reading books, journaling, and taking daily spelling tests, which has been working out pretty well after an initial struggle. We arrived here last Thursday and the following morning we tried to start our well planned homeschool curriculum. Since we were visiting her Nana and Papa, she was in total play mode and wanted no part of doing schoolwork. Sitting down for more than 15 minutes was pure hell for her and she started to whine a lot and throw tantrums. We tried to be patient with her, but after awhile I could only take so much and sent her to room where I gave her a strong lecture about how she is no longer in regular school and we are now her teachers and she will do as we say. The scolding worked great and she is now a model student.

We are also allowing her to choose a topic of her choice each month on something to study. For this first month she chose farming, something she is really passionate about. We have contacted numerous farms in the area for tours and have been turned down by every single one. A couple of local people recommended that we meet up at the Boise Farmers’ Market and talk to some of the farmers there and see if we can get a tour of one of their farms. We spoke to several of the farmers and ended up being invited out to tour an elk ranch. The elk ranch tour was a lot of fun and we all got to learn about raising elk. Feeding elk at the elk ranch

Since Boise is also the home of Nancy from Family on Bikes, we met up with her for coffee in downtown Boise where we picked her brain for travel knowledge. We still need to choose our health insurance provider for the next 2 years overseas, which is surprisingly cheaper than anything you can get for strictly the USA only, but a tough decision none-the-less. We asked her about what they did and also about homeschooling and received a lot of great information. We had mentioned to Sydney that she was chased by a grizzly bear in British Columbia, Canada and had rocks thrown at her and her husband while bicycling through Pakistan. Sydney, always wanting to hear a good story, asked her to recite those tales, which she did to Sydney’s enjoyment. After meeting Nancy we walked around downtown Boise, which is much smaller and less busy compared to downtown Portland, and ended up touring the state capital building. 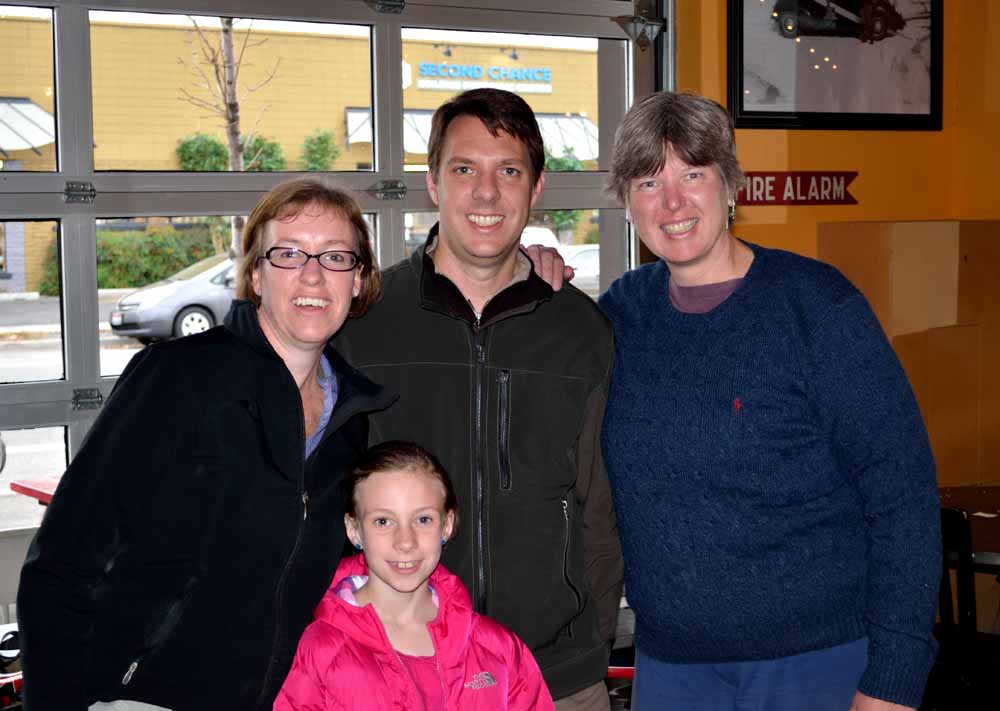 Hanging out in the State Capital

We are planning to rent another U-Haul trailer and leave Boise on Sunday, which happens to be our 12th wedding anniversary. We will be heading to our next destination of Layton, Utah where we will visit Kerri’s sister, brother-in-law, and the nieces. Since arriving in Boise a week ago it has been warm, sunny, and in the 60’s each day. But the weather is starting to change and become cooler, and the forecast now calls for snow on Friday. The forecast in Layton, Utah calls for snow Friday, Saturday, and Sunday. We have a Nissan Xterra 4×4 and it’s usually great in the snow, but towing a trailer will be a little different. This could potentially be a very long drive.