During our stay in Layton, Utah we were looking at things to do that would be fun, yet educational. We were tipped off that just to the north was just the place we were looking for, The George S. Eccles Dinosaur Park in Ogden. We arrived at the museum on a cool sunny morning and found only two cars in the parking lot. Being a school day, most people were at work and their kids at school. Homeschooling and traveling around the world has its advantages! We went in and had the place to ourselves. We looked at the exhibits of gems and fossils and then went outside to enjoy the sunshine and life sized dinosaurs. At this point, Sydney had decided that she now wanted to have 3 careers: veterinarian, farmer, and now a paleontologist. I’m sure once upon a time paleontologists could actually make a living searching for dinosaurs. But the odds are that she would end up working at a college or museum, if she was lucky. We discussed the other option of having paleontology as a hobby. After all, most dinosaur discoveries are made by non-paleontologists. Outside, Sydney found a large sandy area that had fake buried fossils that kids could dig for. She enjoyed uncovering the sections of fossils and trying to figure out what it was and how it went together. We then toured the life sized dinosaur exhibits and had fun taking photos with them. Sydney being chased by a dinosaur 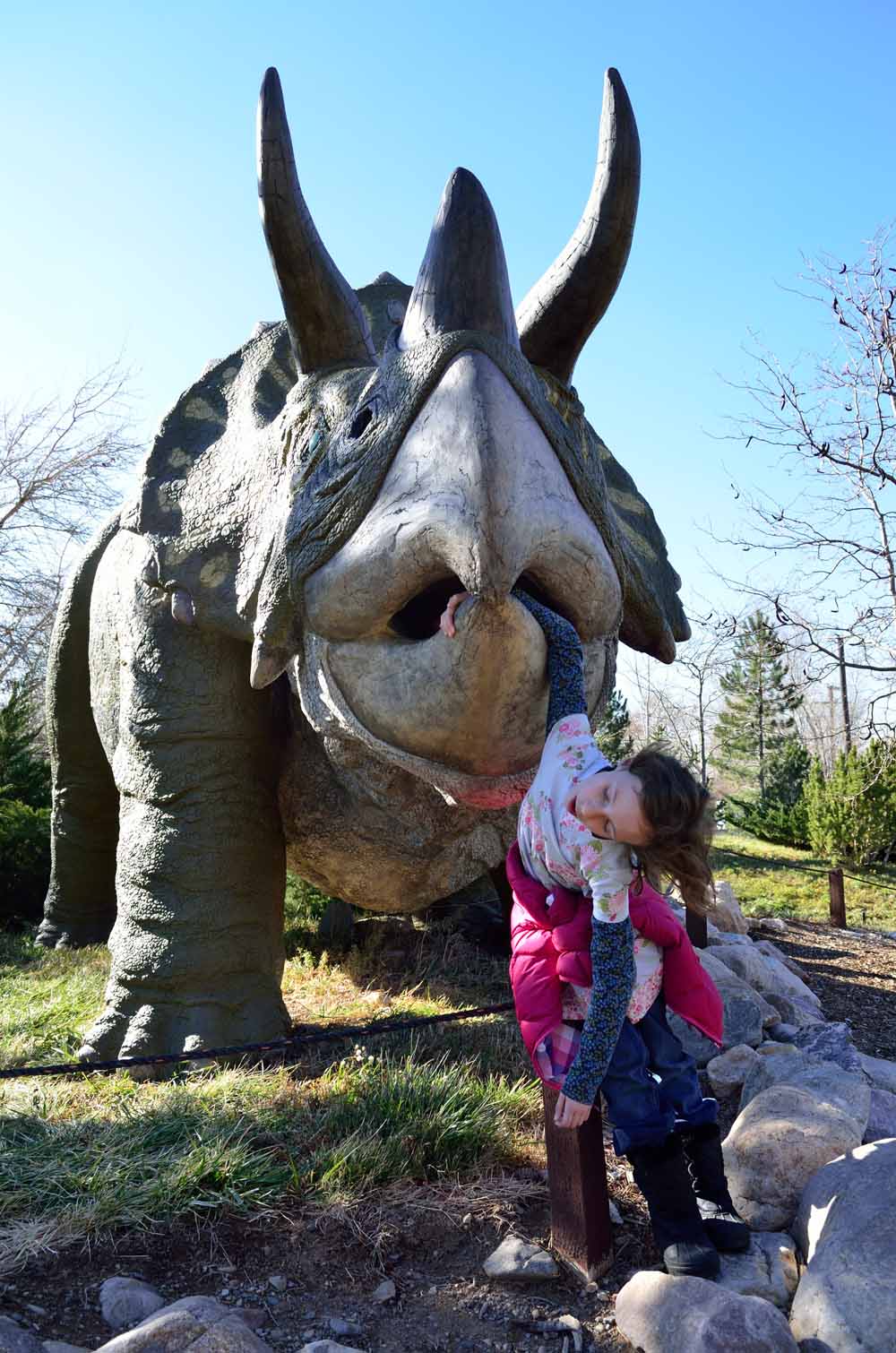 Being eaten by a triceratops

After heading back inside we noticed that there were two people working on unearthing fossils in a glassed in room. We stopped to look at what they were doing, and upon noticing us standing outside the glass, they opened a sliding window to talk to us. Sydney was really excited to discuss dinosaurs with the lady and upon hearing this conversation, the other person in the room came to the door and invited us in. He said that they have the discretion to invite in whomever they wish, but usually only invite in people as interested in dinosaurs as Sydney was. They told us that they were volunteers and loved spending their free time there. They showed us what they were working on, which was a 212 million year old Typothorax found at Ghost Ranch in northern New Mexico. A Typothorax is best described as a giant armadillo with armored plates running down it’s back. The volunteer showed us what they had extracted from the plaster cast containing the fossils and all about their work. It was very educational and really solidified Sydney’s desire to be a paleontologist when she grows up. Room where they unearth fossils 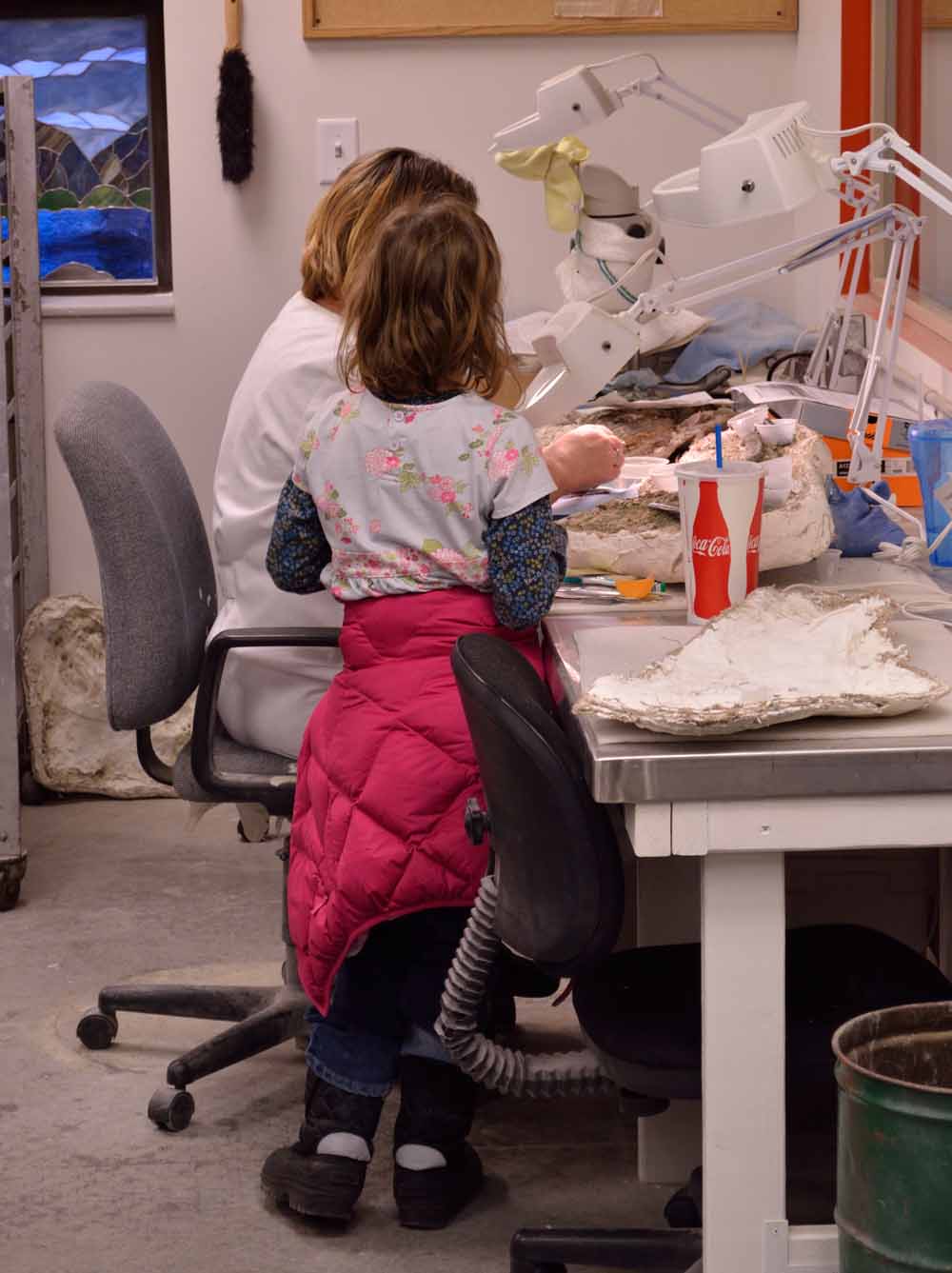 Talking to a volunteer about her work Talking to the volunteer Looking at the fossils from Ghost Ranch 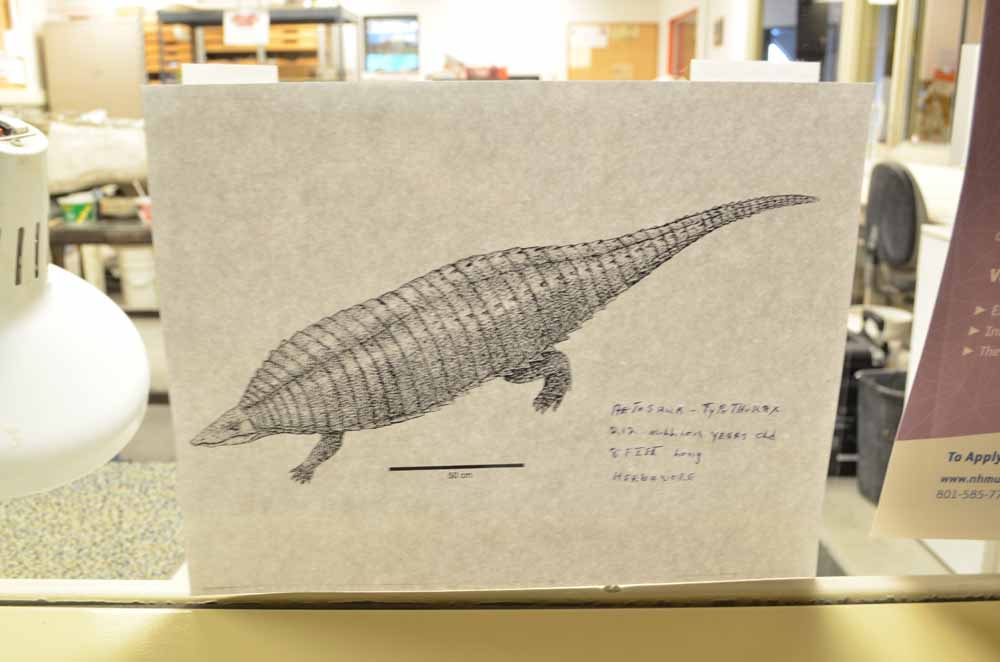 We really enjoyed our visit to the George S. Eccles Dinosaur Park and highly recommend it to anyone who happens to be in the area and would like to learn about dinosaurs and see some amazing fossils.