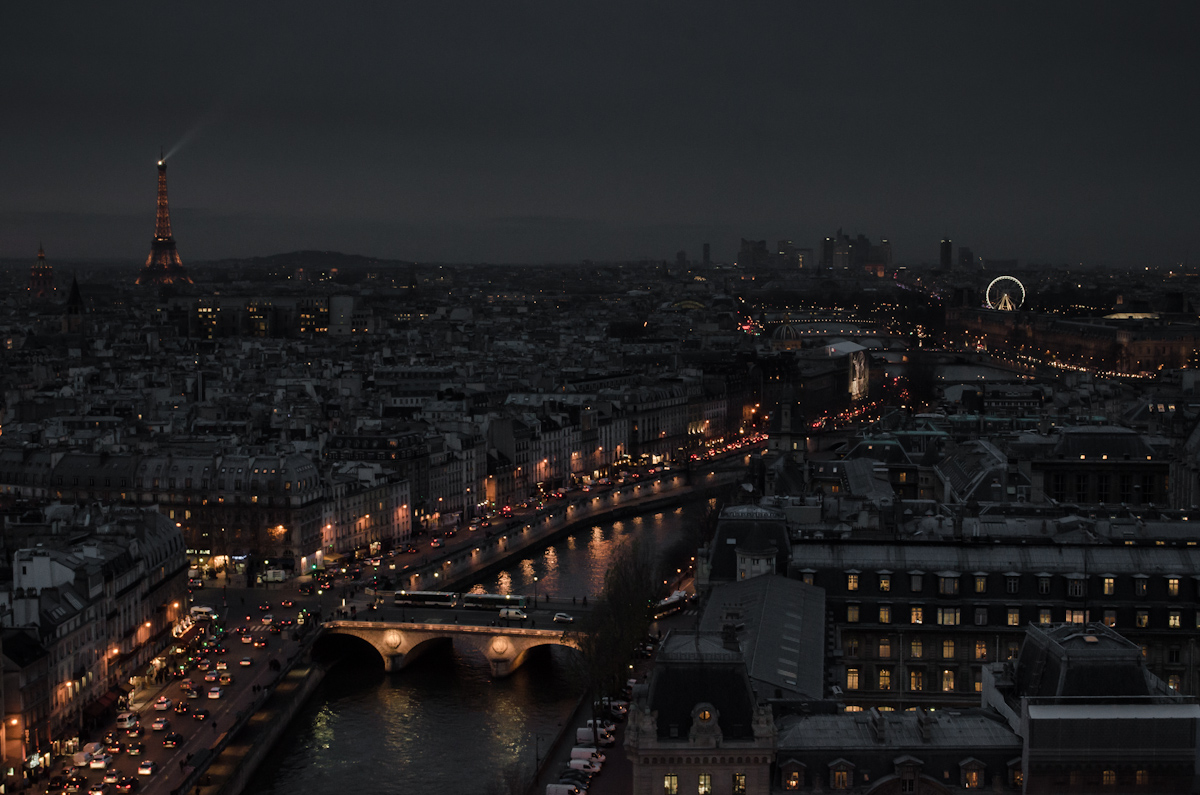 Paris at Night from Notre Dame

After waiting in a long line in the freezing cold, climbing 400 steps up a stone spiral staircase, we finally made our way to the top of the Notre Dame tower. We could not have timed it better as shortly after reaching the very top, the sun dipped below the horizon and created amazing colors. Shortly after that, darkness enshrouded the city of Paris, and in the distance, the Eiffel Tower lit up and it’s rotating beacon shown bright. A perfect picture except there was no room for a tripod. After adjusting camera settings and finding a solid stone to rest the camera against, I started snapping photos like crazy hoping to get a good one. This is my favorite and I hope you enjoy it too.

Have you ever wondered how the Louvre started?  The Louvre started as a palace for kings and queens of France. It became a museum during the French Revolution. There are more than 30,000 art pieces. The Louvre has paintings from medieval times, Renaissance, and ancient Egypt.

Here is a good way to start your tour at the Louvre. Go to the Mona Lisa because everyone wants to see it first.  The Mona Lisa is very famous.  The painting is by Leonardo Da Vinci.  Before you go and see the Mona Lisa you might want to pick some postcards of art so you can go on a treasure hunt for the paintings.

What makes the Mona Lisa famous? Do her eyes follow you? Is she happy or sad? Why do you like her? I like her because her eyes follow you. She has a tender smile. She is maybe thinking of how lovely her painting is going to be. The Mona Lisa was STOLEN in 1911 by an employee.  She was gone for 2 YEARS!  The Mona Lisa is from Italy. Do you know how the employee was found out? The employee was going to sell it back to Italy and a person turned him in.

You can take awesome art classes. The cost is around 6 to 9 euros. I took art classes about Egypt.  I learned that Egyptians built a palace for the kings and queens.  The palace is now under water.  The palace was on an island. There was a bridge that is preserved in the Louvre. The Egyptian kings and queens got buried in a sarcophagus with their belongings. You could tell a boy or girl by how they were standing in a picture.

Facts about the Louvre

Every so often during our stay in Paris we have been able to climb above the canyon of gray dull buildings. Each time we have emerged, we have noticed a brilliant white building with onion shaped domes perched atop a hill. What could that building possibly be? Sacre-Coeur of course! Sacre-Coeur sits atop the highest point in Paris at a whopping 420 feet. If one is lucky enough to see the sun in December, Sacre-Coeur will shine brilliantly white and immediately draw one’s eye. At sunset it will turn a pinkish color and look magnificant.

Curious about this beautiful building, this past week we decided to adventure over to the neighborhood of Monmartre to see Sacre-Coeur. We hopped off at the Anvers Metro stop and began our ascent to the top. At the base of Sacre-Coeur is an eclectic mix of tourist shops, musicians, cafes, artists, a park and a few pushy people selling trinkets. Even the Anvers Metro stop sign is unique, as it is one of the few Art Nouveau Metro signs left in Paris designed by Hector Guimard. To avoid the endless steps we could have taken a funicular to the top for the cost of a metro ticket, but we decided to climb the steps. The walk was well worth it.  As we went up the steps, the view became increasingly breathtaking both literally and figuratively and it is by far the best view of Paris

Although Sacre-Coeur looks old, it is relatively new compared to some of the other behemoth churches in Paris. It was built approximately a century ago after the Prussian war to atone the “sins” of France. The brilliant white walls are due to the gypsum rock as gypsum rock whitens as it ages. The interior is impressive with detailed mosaics, but no photography is allowed. The original stained glass windows were blown out due to the concussive force of Allied bombs during WWII. The current stained glass is pretty and tells the story of Joan of Arc, but it is nowhere near as impressive as some of the other stained glass we seen while in Paris.

To experience an even better view of Paris you can pay 6 euros for an adult and 4 euros for a child to climb the dome. While trying to purchase our tickets, I attempted to explain in apparently very bad French that we would like tickets for the dome only and not the crypt. The ticket person politely asked, “Please speak English. It will be easier.” Her English was much better than my French! The 300-step spiral staircase up to the dome is even narrower than that of Notre Dame and I began feeling dizzy with the endless spiral upward, but alas we came to the top. The cost and climb was all worth it. The city spread out below our feet. We were also lucky as the sun peeked out behind some clouds and lit up the city beautifully.

After our descent from the dome, we wandered around the streets of Montmartre seeing one of the only two surviving windmills in Paris and some unique art. It was also fun to window shop at some of the eclectic shops. We enjoyed a picnic at the base of Sacre-Coeur eating delicious stuffed baguette pizzas with chorizo.

If you are looking for some of the best views of Paris, lots of interesting art and a fun day out with children, Sacre-Coeur is the place to go.

We found a place in Paris that is so popular, people are literally dying to get in: the Pere Lachaise Cemetery. Cheesy, I know, but this place is seriously popular to be buried in and draws a lot of tourists!

We decided to take the scenic above ground route to the cemetery and hopped on the #69 bus, which according to the Rick Steves’ is the best bus to go sightseeing with the last stop being the cemetery. The bus ride was okay, going by places that we had either visited or walked by, but after 3 weeks of riding the underground Metro it was interesting to see what it’s like to drive in traffic. Paris’ bus drivers have got to be some of the best bus drivers in the world, as they have to go down seriously narrow streets and around illegally parked vehicles obstructing traffic.

Once at the cemetery we decided to use the walking tour found in the Rick Steves’ Paris guidebook to get us through the massive cemetery. Once through the gates and following the guidebook, we eventually come to the first famous person, Oscar Wilde (1854-1900.) Oscar was a famous writer, but more famous as being a martyr to homosexuality. A plastic wall covered in lipstick surrounds his massive tombstone.

As we searched for the next famous person on Rick Steves’ list, we came across massive monuments to remember those who died in wars and concentration camps. The monuments were very detailed and really expressed the messages that they tried to convey.

Next on the list, Gertrude Stein (1874-1946) who was famous at… being famous, I guess. She has some famous quotes and hung out with the Paris intellectuals of the time, but other than that, I don’t know not much about her.

Next on the tour is the Communards Wall where on May 28, 1871, the 147 Communards of the Paris Commune came to an end when they were lined up and shot by French soldiers against that wall. I looked for bullet holes, but didn’t find any.

We found next couple of people on the tour, Edith Piaf and Moliere who I know nothing about, even after reading about them. I guess I was too excited to find the next person on the list.

Next on the list, Jim. One of many people buried at Pere Lachaise is the legendary front man for The Doors, Jim Morrison. Jim Morrison died exactly 3 months before I was born and ever since I started to enjoy the music of The Doors as a teenager, I have always wanted to visit this cemetery and see his grave. Jim’s grave has always drawn a lot of fans and the original shield placed on the grave was stolen in 1973. In 1981, Croatian sculptor Mladen Mikulin created a bust of Jim Morrison and was placed on a new gravestone with Jim’s name carved on it. In 1988, the bust was stolen and has never been found. In the early 1990’s, Jim’s father placed a gravestone with a Greek transcription that reads, KATA TON DAIMONA EAYTOY, which means “According to his own daemon.” I have heard for years that the cemetery is tired of all the vandals that come visit Jim’s grave and have threatened to kick him out. I was saddened to see all the graffiti on the other tombstones around Jim’s grave and the fence they had to put up with a warning sign to keep people out. But then again, I expected it.

Next on the list was another famous musician, Frederic Chopin (1810-1849). We tried to explain to our daughter Sydney that he was a famous composer and she replied, “As famous as Beethoven?” I bet Chopin was rolling in his grave!

Next up, Colette (1873-1954) who is France’s most honored writer. Personally, I have never read anything she wrote. Perhaps I should learn to read French a bit better first.

And to end the tour, Gioacchino Rossini (1792-1868). Okay, when hearing this name you are probably just like I was and wondering whom the heck this dead Italian guy is. Well, he wrote the famous Lone Ranger theme song… William Tell Overture. Yes, the one and only.

So there you have it. Photos and a brief explanation of what we saw at the Pere Lachaise Cemetery. I have to say in all honesty that this place is amazing to visit. Not just for its residents, but for the sheer beauty of the place. The monuments and crypts are works of art that we have seen in no other cemetery. I can easily see why people are dying to get in there… 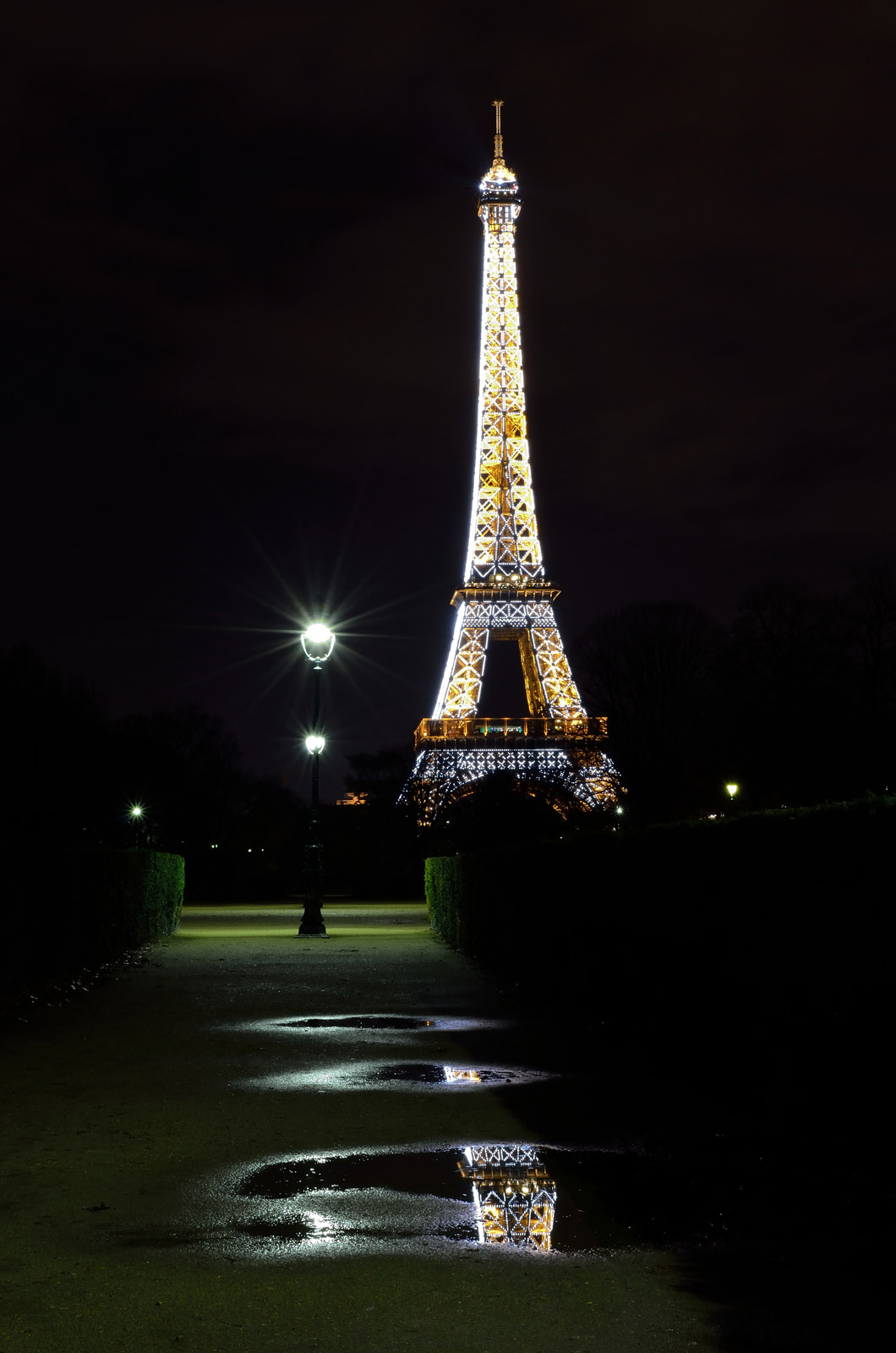 While the Eiffel Tower is impressive during the day, at night, it is simply amazing! It is covered in lights and can be seen from all over Paris. On the hour, each hour, it does a light show where the lights all over the tower sparkle for 5 minutes. A few nights ago I went down with a tripod and took lots of photos of the Eiffel Tower at night. I really liked this one with the reflection of the tower in the puddles, and hope you enjoy it as much as I do.