First off, nobody paid me to write this. This is an honest review of what we have found to be the cheapest solution for a pre-paid phone plan in France.

Do We Need a Phone in France?

When we arrived in France nearly 3 weeks ago we were not sure if we would need a phone. I am a firm believer in owning an unlocked GSM cellphone and had one with me, so if we did need a phone, all we would need to do is purchase a local SIM card. If you don’t know what an unlocked cellphone is, it is a phone that is not locked to a carrier and can be used with any cellphone company. That is, a phone that is locked to AT&T can only be used with AT&T, whereas, an unlocked phone can be used with any company that offers pre-paid SIM cards. There is a little bit more to it, so to read more about unlocked cellphones, you can read this article I wrote about them:

We soon realized that we did need a phone for making reservations, finding hours that businesses are open (many websites in France are not updated regularly), and calling family back home.  We started looking around at the different options for pre-paid SIM cards.

The two biggest cellphone companies in France seem to be Orange and SFR. We stopped at one of the many Orange stores around Paris and asked them what are the costs for a SIM card and what their rates are. The SIM card cost €10 and includes €5 worth of credit. When asking what the charge for calls was we were a bit shocked, 50 cents per minute within France and €1 per minute to the United States. We were hoping to find cheaper and found an SFR store in the mall, which their prices were exactly the same as Orange. We then stumbled across a cellphone specialty store called “The Phone House” and found out that they used Orange and their prices were the same as what was quoted in the Orange store.

We had noticed a small internet café a couple of blocks down the street from our apartment that also sold cellphones. We stopped in and asked if they sold pre-paid SIM cards and they did. The guy that worked the counter told us that the SIM card costs €10 and has 7€50 credit. Better than Orange or SFR, but what was the charge per minute for calls? At this point we were skeptical of finding a cheap phone plan in France, but the guy said that the SIM card is through Lycamobile and is the cheapest plan available in France. Calls within France cost 15 cents per minute and international calls to the United States cost 5 cents per minute with a 15 cents connection charge. And the best part, calls between Lycamobile phones are free, even internationally. Unfortunately, Lycamobile is not in the United States, but if we wanted a second cellphone Kerri and I could call each other and it would not cost anything.

Once we got home I inserted the SIM card and went to Lycamobile’s website and activated the card, as per the instructions. You can also activate it through the phone, but you need to mail them a copy of your passport or drivers license. I needed to enter in my personal information including a French address and drivers license (or passport) number. If you are visiting and staying at a hotel, you could probably use your hotel address and not have a problem. After that, our phone was active and we had a French phone number. To top off the minutes, you can do it through the phone or through Lycamobile’s website. Piece of cake and really cheap!

Buying a Phone in France

You can always buy an unlocked cellphone after arriving in France, but many of the phones for pre-paid plans are not very good and you will probably pay more than if you had purchased one before leaving. Personally, if you are planning a trip to France I would buy one before you leave through Amazon.com where I have found the best prices for unlocked cell phones. You can get anything from a super basic Blu cellphone for basic calls or an unlocked iPhone for everything. The phone I am currently using is an inexpensive Samsung i5500 Corby Galaxy 5 which has WI-FI for free internet, and Angry Birds for entertainment.

Have you ever wondered how the Paris Catacombs were started? Before the Catacombs started they were limestone quarries. The limestone was used to build Notre Dame and other buildings. When people died they got buried in churchyards.  It took up too much space and people got sick from the dead bodies.  They put them in the limestone quarries under Paris.  Would you want to dig up the yucky bodies? I would not. You would expect to see bones right away.  You need to get deep enough. Before you enter the bones. You need to go 60 feet down. There is a sign saying, “HALT! This is the empire of the dead.” It will be the perfect thing for Halloween. It was awesome. THE BONES ARE COOL!

Facts about the Paris Catacombs

Now you know all about the Paris Catacombs. 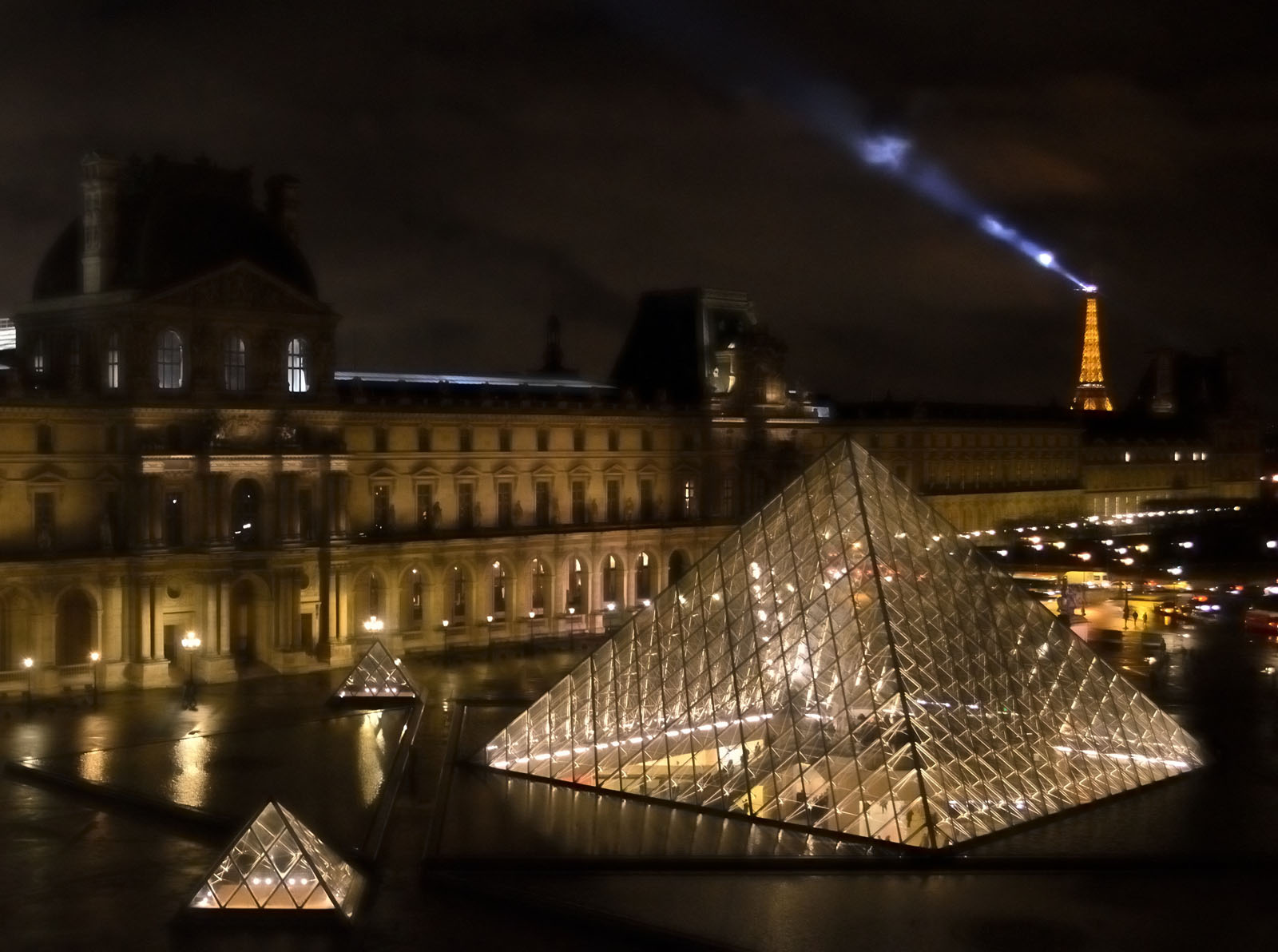 To avoid the crowds at the Louvre in Paris, we went on a Wednesday night when it stays open later. Not only are the crowds less, but you have some amazing night views from the large windows. This photo looks just like a scene out of the movie The Da Vinci Code. 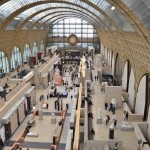 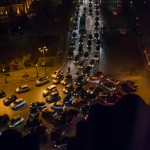 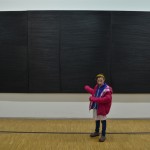 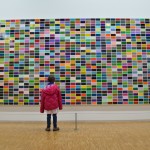 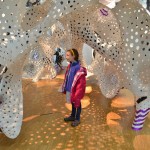 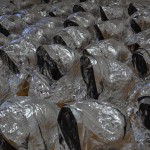 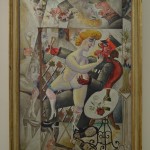 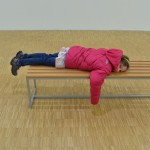 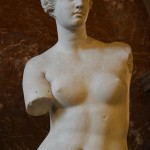 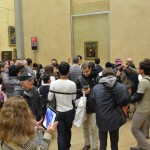 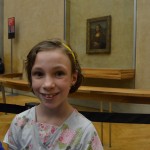 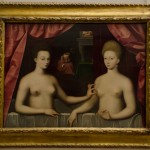 Paris is an amazing city, as it is like a huge outdoor museum in itself. Everywhere you turn there are museums, statues or sites with history dating back thousands of years.  During our month stay in Paris, we could easily go wild and blow our budget just seeing all the museums and spend all our waking moments in museums. Although we are on a tight budget, this does not mean we are going to skimp on or avoid seeing some of the major sites of Paris.  After all, to see the sites of an area and to truly learn the history is one of the many reasons why I am traveling around the world.  One great strategy we used to save money was to purchase a Museum Pass.  The Museum Pass has allowed us to see many of the big and even small museums around Paris at a fraction of the cost.  The Museum Pass can be either purchased for 2, 4, or 6 days.  We chose to purchase the 6-day pass for 69 euros.  This sounds pricey, but if one were to add up all the museums we saw over the 6 days, the museum pass is a fraction of what we would have paid for each individual museum.  We did not need to buy a Museum Pass for Sydney, as most of the museums are free for children under 12.

I won’t lie, those 6 days were exhausting and by the end I needed a break from the sightseeing.  However over those 6 days, we saw oodles of museums, some of which were great and some not so great.   We were also able to go back a couple times to several of the larger museums.  Dividing up a large museum such as the Louvre over several days was a great strategy especially traveling with a child. Although, the Louvre amazes me, there is only so much art Sydney can take in one day.  With the Museum Pass, I also saw a couple places that I would have been reluctant to pay out of pocket for such as the Paris Sewer Tour or climbing the top of Notre Dame.

Although it was busy and exhausting, Sydney overall did well.  We tried to pick a fun museum for Sydney each day.  For some of the bigger art museums, we kept Sydney’s interest by going on an art treasure hunt.  This meant having her pick several art pieces from post cards or the museum pamphlet that she liked and having her find them in the museum.   Unfortunately several of her picks were not on display.

In our mad dash through the museums and sites, I have learned much about the history and also about myself.  My favorite moments so far have been simple pleasures:  watching the traffic with Sydney from the top of the Arc de Triomphe and watching the sunset from Notre Dame.  Paris is beautifully lit up at night.  At the Arc de Triomphe, 12 major traffic arteries converge at the round about.  There are no painted lanes and the cars go every which way.  But more interesting is watching the motorcycles weave in and out and squeeze around cars.  It is plain craziness.  Out of the chaos, traffic flows with minimal interruption.  We saw no accidents, but heard lots of honking.  In visiting the Pompidou, or as Sydney and Jason call it, the “Poopydoo,” I have also found that I do not like a lot of modern art.  I actually prefer the period of art called Impressionism.  Previously to visiting the Orsay Museum, which houses many famous Impressionist artists, I did not understand why people liked Vincent Van Gogh.  But after seeing Van Gogh paintings in person, it adds a whole new dimension to his work.  The texture makes his paintings come alive.  Versaille is just plain extravagant even to modern day standards.  The most moving museum I have seen so far was actually a free memorial called the Deportation Memorial.  Though it is stark, it manages to convey the atrocities of the deportation of 200,000 French citizens to internment camps and subsequent extermination.  The museums I have been most disappointed by so far have been the Science and Industry Museum and the Jewish Art and History Museum.  Though the building for the Science and Industry Museum is huge, there are not as many exhibits as I would expect for its size.  Several of the exhibits also cost extra money, which can easily add up.  It even cost for Sydney to go in.  We have a similar type of science and industry museum back in Portland called OMSI.  I feel like OMSI has just as many exhibits, but also has more hands on exhibits.  I also feel like the exhibits at OMSI are more tailored to the child’s level.  I also disappointed by the Jewish Art and History Museum.  I had high hopes for this one, but I walked away feeling like I had not learned much about Jewish History or Art.  The museum that I had the least interest in, but turned out I actually enjoyed and learned quit a bit from was the Paris Sewer Tour.  The Paris Sewer Tour exposes the fascinating workings of Paris’ underbelly – the sewer.

If you find yourself in Paris and want to see some of the sites and save money, the Museum Pass is a great deal.  The Museum Pass will open up a world of opportunities, some well known and others not so well known. 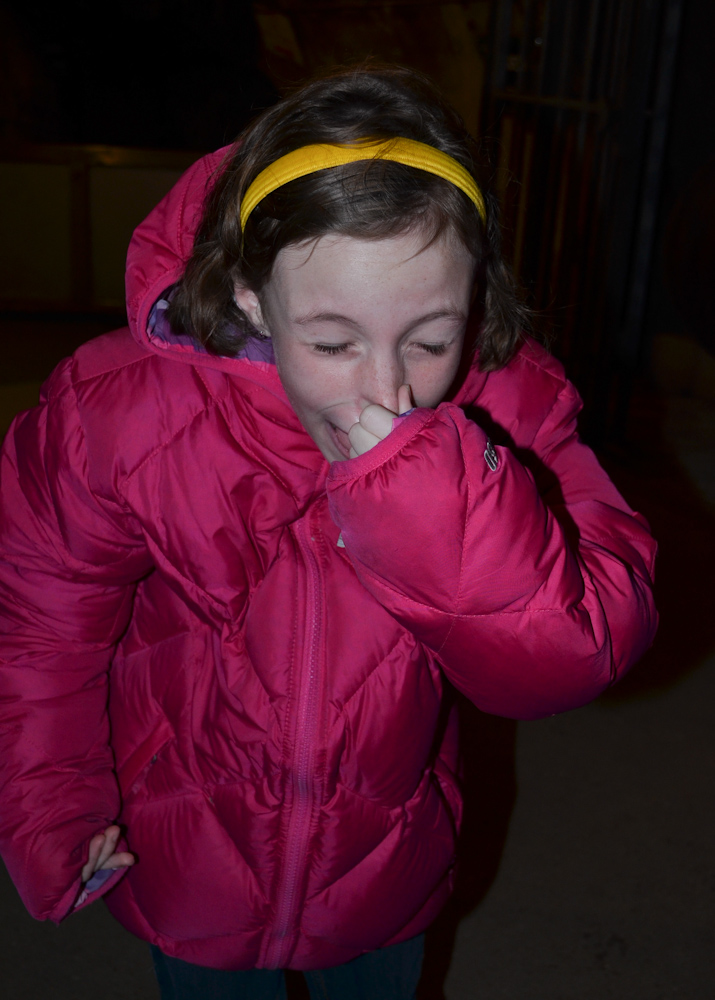 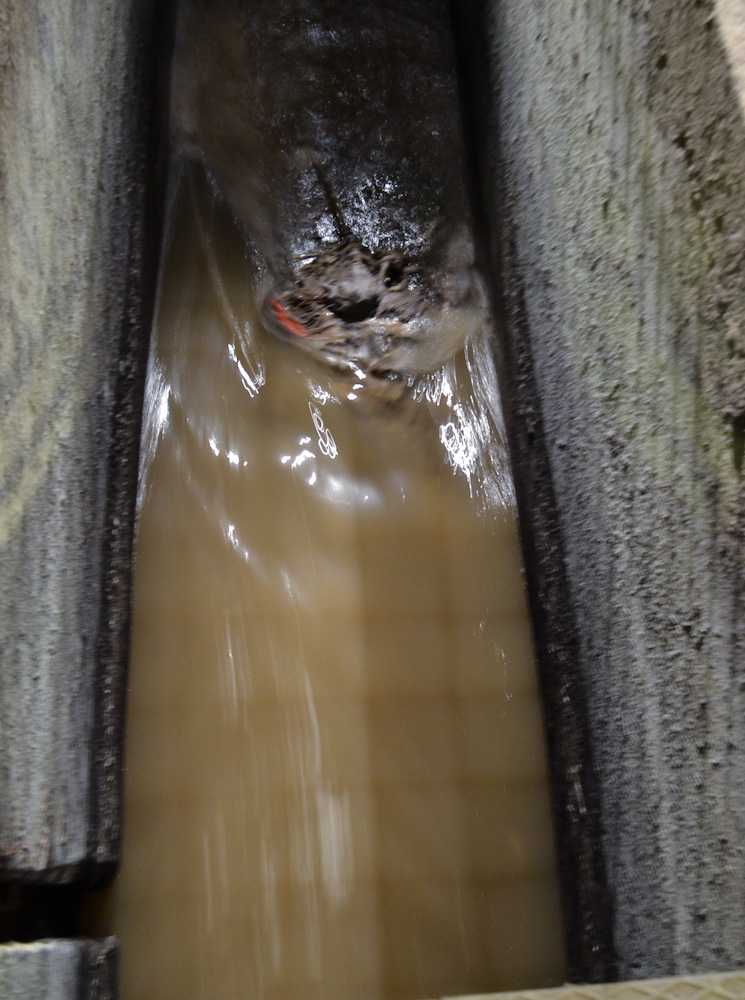 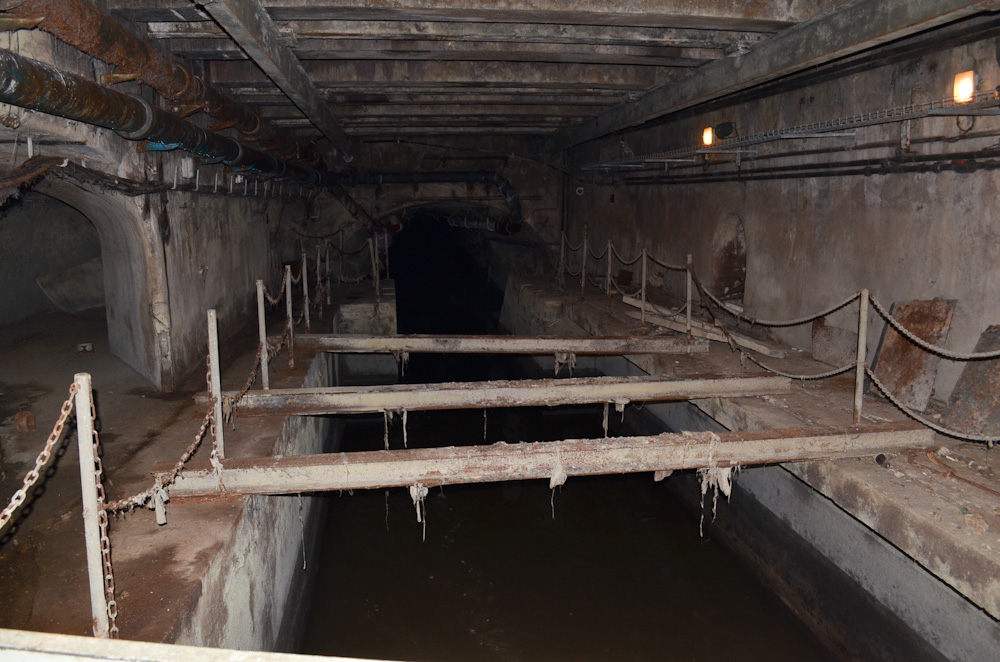 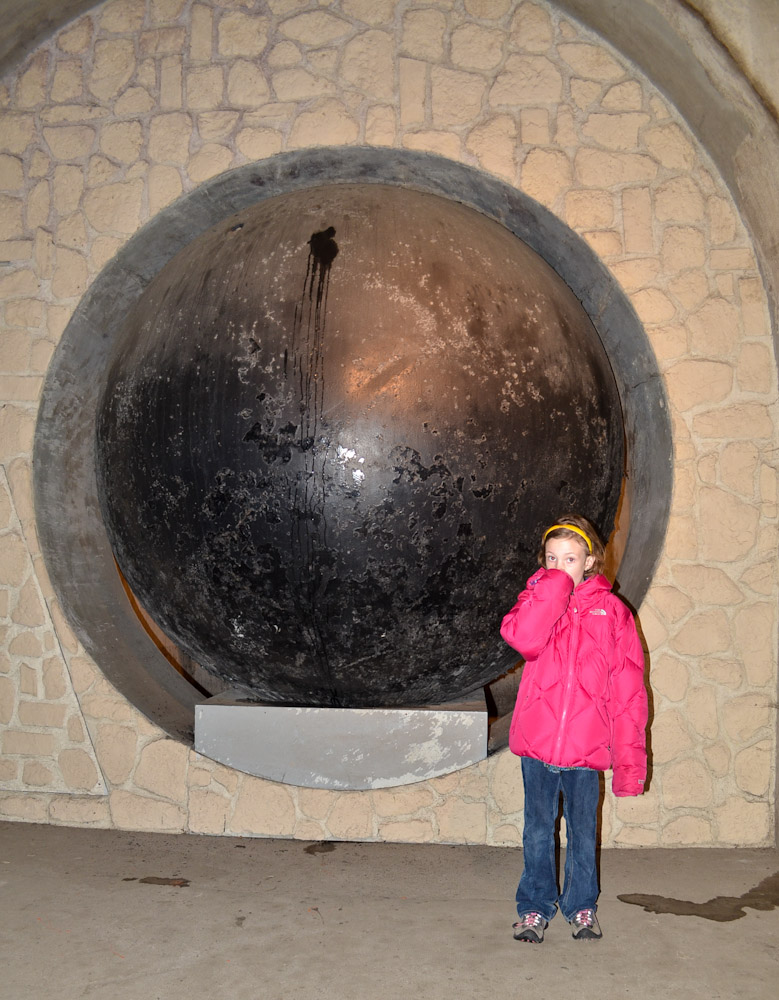