Christmas season in the United States assaults all your senses. From Christmas lights, bell ringers, Christmas music, crowds of people shopping, shopping, and shopping some more, you just can’t escape it. It’s a wonderful time of year, but is also so commercialized and over-the-top that it seems ridiculous. Yet, we can’t resist the impulse to fight the crowds at the malls and buy presents for people so we don’t feel guilty. More is better. At least, that is what the advertisements lead us to believe. 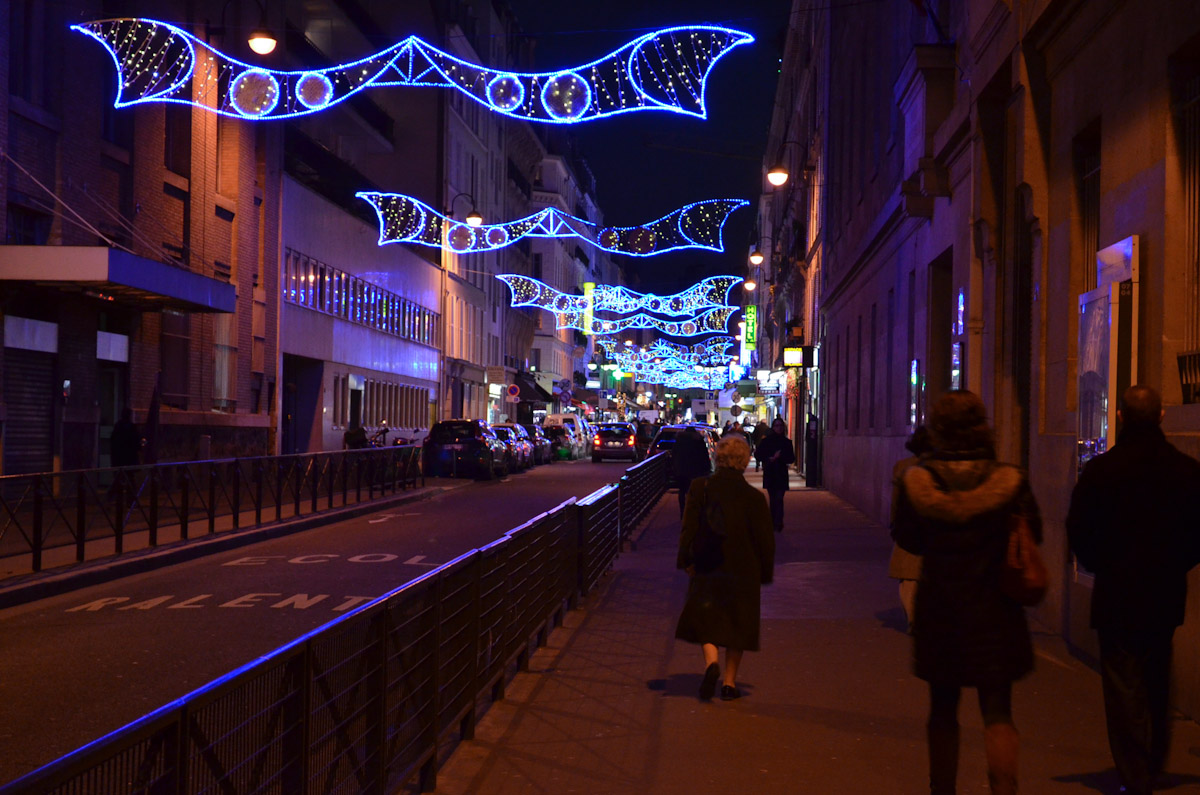 Having just spent the entire month of December in Paris we now have a new appreciation for Christmas. When we first imagined Christmas in Paris we pictured it similar to the United States, but in French and perhaps with a bit more style. When we arrived in Paris on December 1st we were shocked to not see any Christmas decorations. In the United States, Christmas decorations go up in stores the day after Halloween. But during our one-month stay in Paris we learned something. In Paris, Christmas is simple. There is no Black Friday, no bell ringers, and no Christmas music. The decorations are simple, yet elegant, and don’t go up until a week or two before Christmas. There are no mass crowds in the malls with shopping carts overflowing with merchandise. Yes, people do buy presents, but not to the extent that we do in the United States. To be honest, it was really refreshing. It was simple.

So what do the Parisians do to celebrate Christmas? They do what everyone should do during the holiday season; they have fun! Christmas in Paris is like a carnival. Amusement rides, carousels, and ice-skating rinks are setup for family fun. A few Christmas markets pop up around town where you can buy handcrafts or treats like cotton candy (barbe a papa) for the kids and hot wine for the adults. 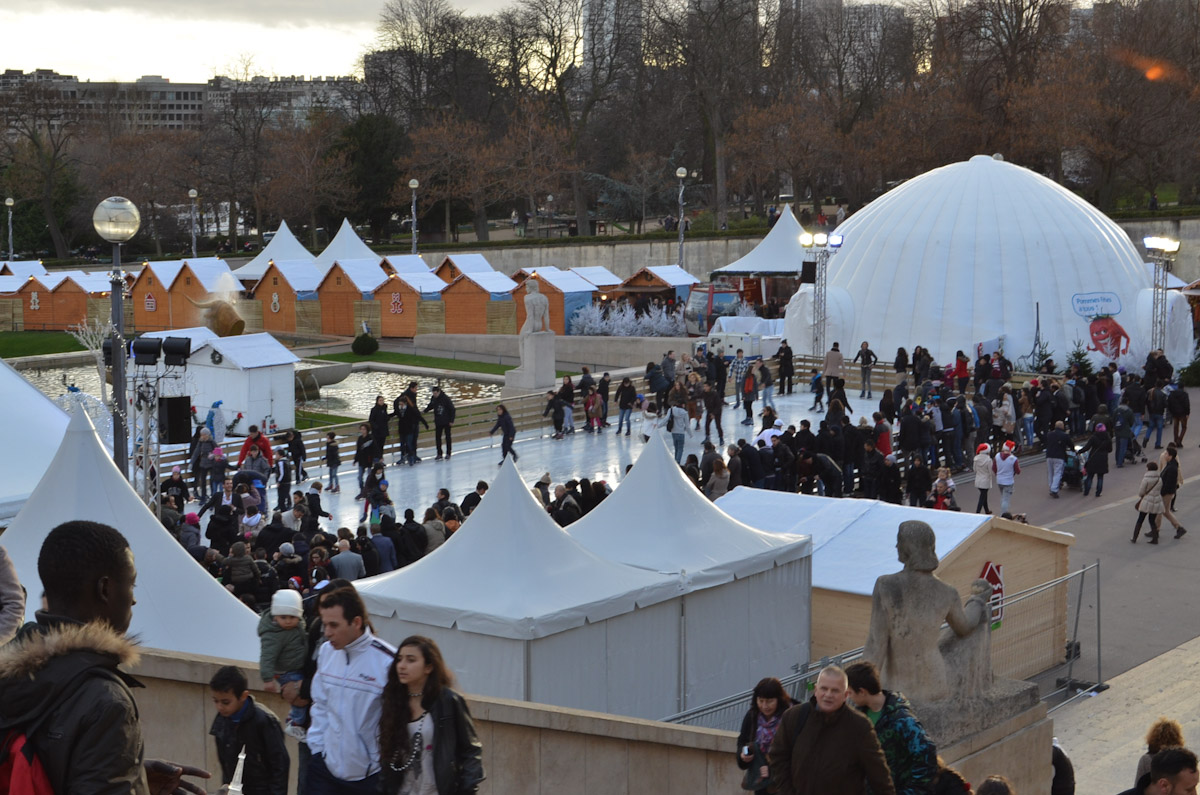 Christmas in Paris is also all about the food. A couple of weeks before Christmas you start to see decorations go up in the shop windows. The French bakeries, or pâtisseries, decorate their windows and display cases with Yule log shaped cakes, called Buche de Noel. Chocolatiers decorate their windows with freshly made chocolate Santa Claus’ and other Christmas themed treats. Instead of cheap plastic decorations, Parisians decorate with lots of edible decorations that are truly pieces of art. Another popular Christmas food in Paris is oysters. Fresh oysters are everywhere, from markets to restaurants; they really seem to be the Christmas food of choice. It’s hard to imagine oysters being a traditional Christmas food, but it actually stems from a 17th century royal edict. At that time, the number of oysters in France were decreasing so they made a law banning the eating of oysters except for those months that had an ‘r’ in the name. Voila, oysters in décembre. 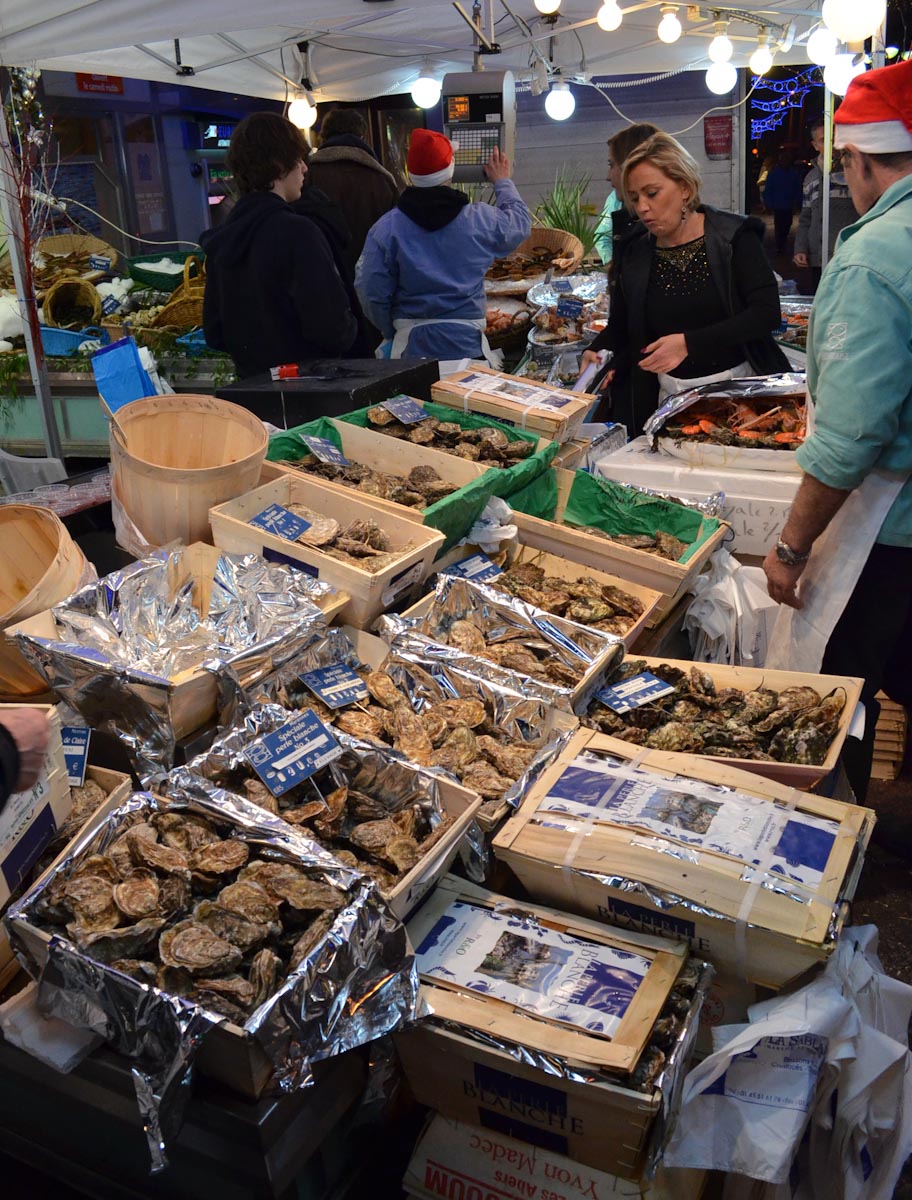 For those that need their fix of Christmas music in English, the American Church gets together one evening a few nights before Christmas to go caroling. During our stay there we needed such a fix and decided to go. We met with the other carolers inside the church and enjoyed hot drinks and cookies before venturing out to the busy Metro where we sang Jingle Bells to the delight of the passengers and then walked up the busy Avenue des Champs-Élysées singing an assortment of Christmas songs in English. Although we do not consider ourselves good singers, just being around like-minded people who needed a good dose of Christmas Music in English and wanting to share it with others was a lot of fun. On Christmas Eve the city of Paris is feels like any other day, with the exception of more church bells calling people to Christmas Eve Mass. We had considered going to Christmas Eve service at Notre Dame, but after witnessing the setting up of stadium-sized bleachers outside the church, we knew it would be a zoo. Since we were visiting Paris with our 8-year old daughter we were hoping to find something to do that she would tolerate. When we went caroling with the American Church they had mentioned that they had a family-friendly Christmas Eve service and we decided to go to that one. The service was indeed very family-friendly and ended with everyone lighting glow sticks and singing Silent Night. Afterwards, the reception was very nice with hot wine and snacks. 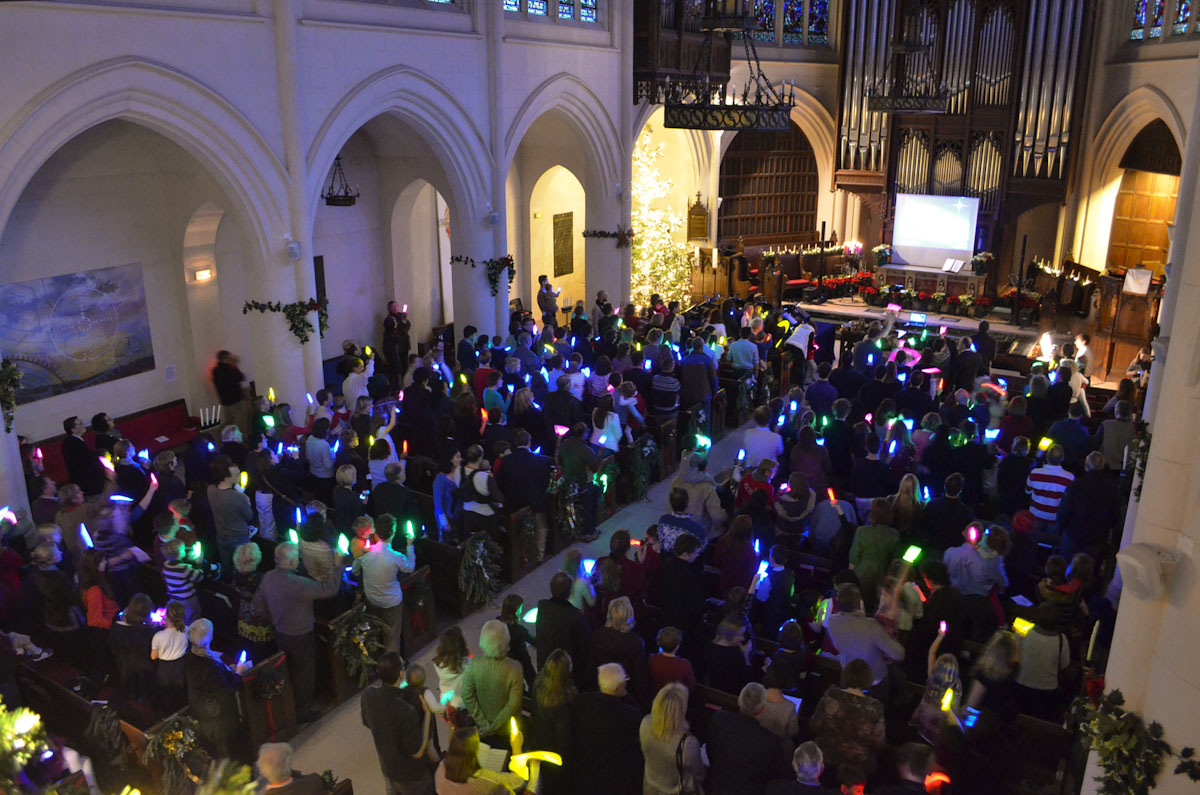 Christmas Day in Paris feels like a ghost town. The streets are deserted, the stores are closed, and it is eerily quiet. That is unless you go down to the Eiffel Tower, which happens to be one of the very few things open on Christmas Day. Thinking that the crowds might be less on Christmas and we could actually go to the top without waiting in long lines, we made the journey to the tower. We were surprised to find it the busiest we had seen it in the 3 weeks that we had been in Paris. Everyone else had the same idea and the place was packed with people at the base of the tower as well as across the river at the Christmas Market.