Before we left for our around the world adventure, I would tell people about our tentative route which included Morocco.  When I mentioned Morocco, either people knew very little about it or they would raise their eyebrows and say that we would not last the month.  Admittedly before we arrived to Morocco, I was one of those people who knew very little about the country and I really was not sure what to expect. I had some apprehensions given some of the things that we had heard about Morocco before leaving.

We decided to stay in Rabat, Morocco for the month of March as we had heard that it was really laid back and not as intense as some of the other cities in Morocco. Initially after arriving I was a little overwhelmed.  Morocco truly assaults all the senses from smell to sight to hearing.  I think my feelings of being overwhelmed where made worse after spending the first 3 months in Europe on our around the world adventure.  Morocco was a huge change from Europe.  However, as we have explored Rabat, Morocco I have come to appreciate and even admire its’ uniqueness.  Once I got past the pollution, the crowds, and the noise, I have discovered that Rabat has some beautiful sites and the people are very friendly.

I thought I might share some of our favorites spots we have found while staying in Rabat.

Le Tour Hassan and Mausoleum of Mohammad V are located along the Bou Regreg River.  The area is blissfully peaceful as honking is not allowed on the streets next to the monuments and it is also surrounded by a garden.  The construction of the Tour Hassan was started in 1195.  At that time it was to be the biggest Mosque in the world.  However, the Sultan who commissioned the building died before its’ completion.  An earthquake damaged the structure in 1755 and the Tour Hassan (tower) and pillars are all that remain of the mosque.  Located at the other end of square of pillars and Tour Hassan is the Mausoleum of Mohammad the V.  The mausoleum contains the remains of the current King’s grandfather and father.  The mausoleum is covered in intricate carvings and tile patterns that create a peaceful and beautiful space.  We enjoyed wandering around the square and climbing on the pillars.  My daughter, Sydney, the animal lover, liked the guards on the horses at the entrances of the square the best. 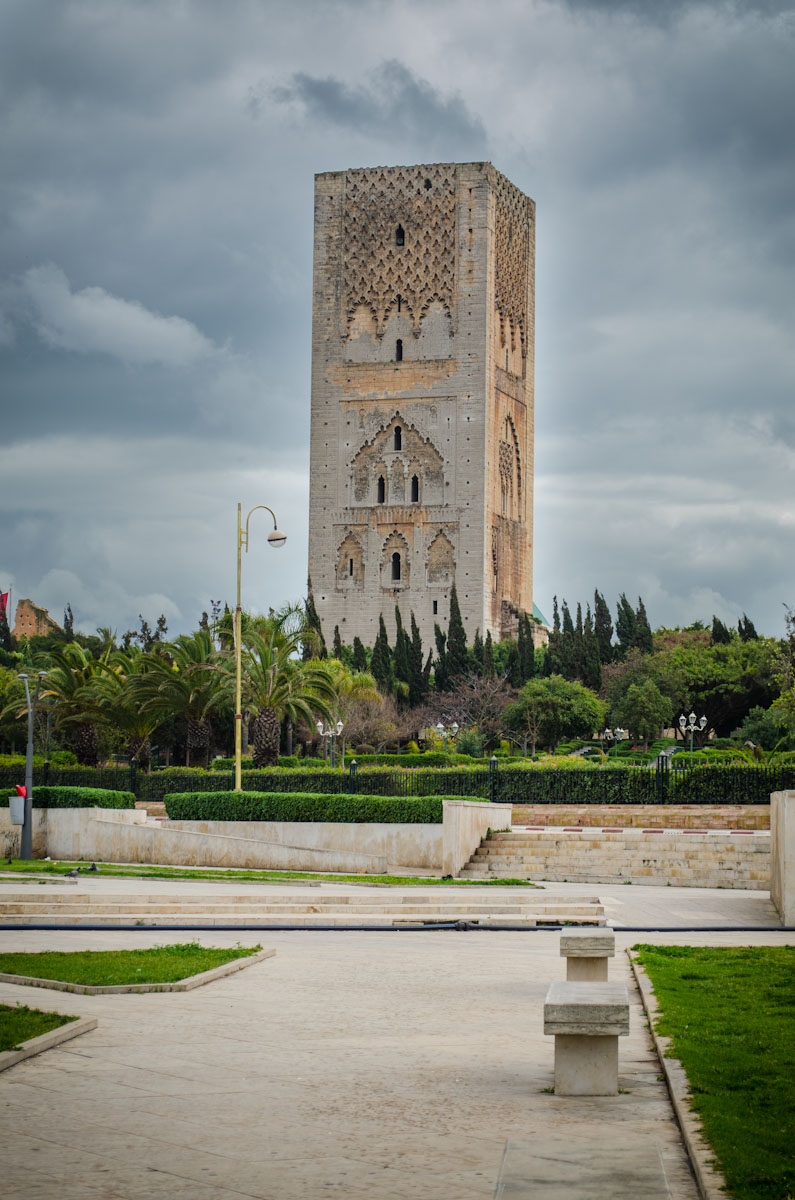 Le Tour Hassan and the gardens 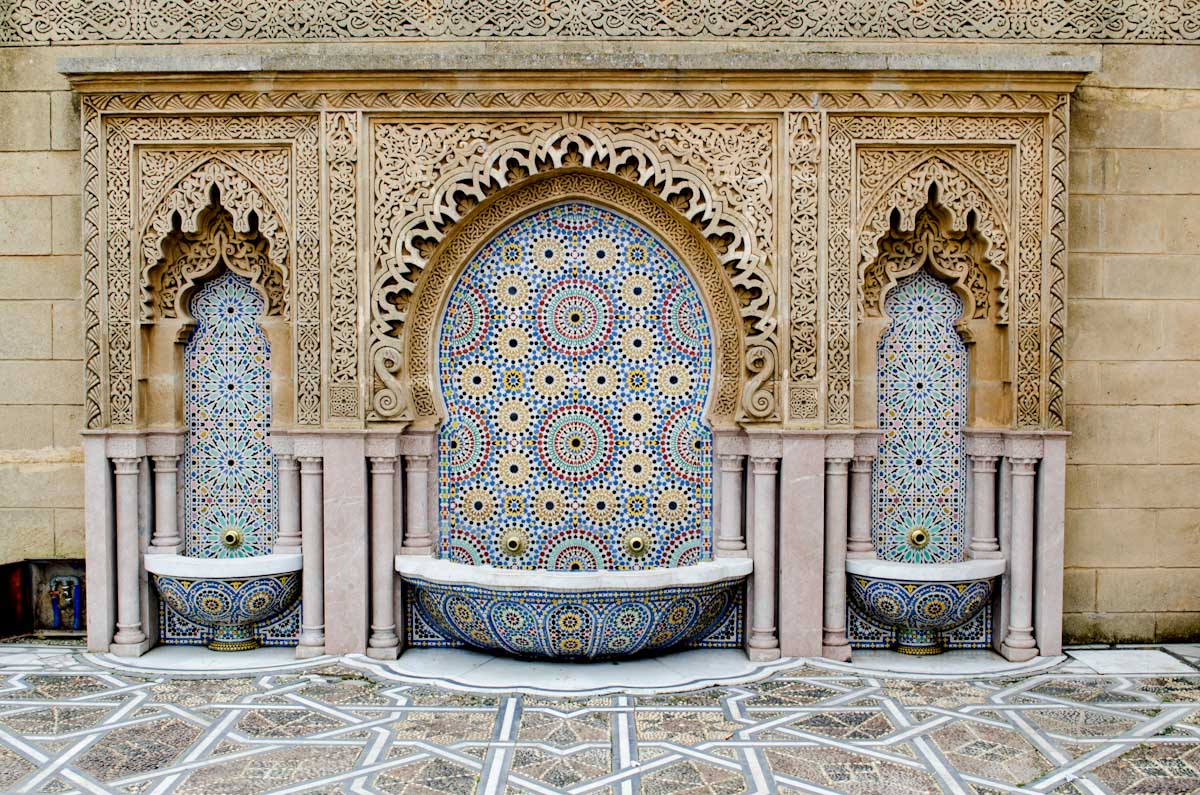 Fountain outside the Mausoleum of Mohammad the V 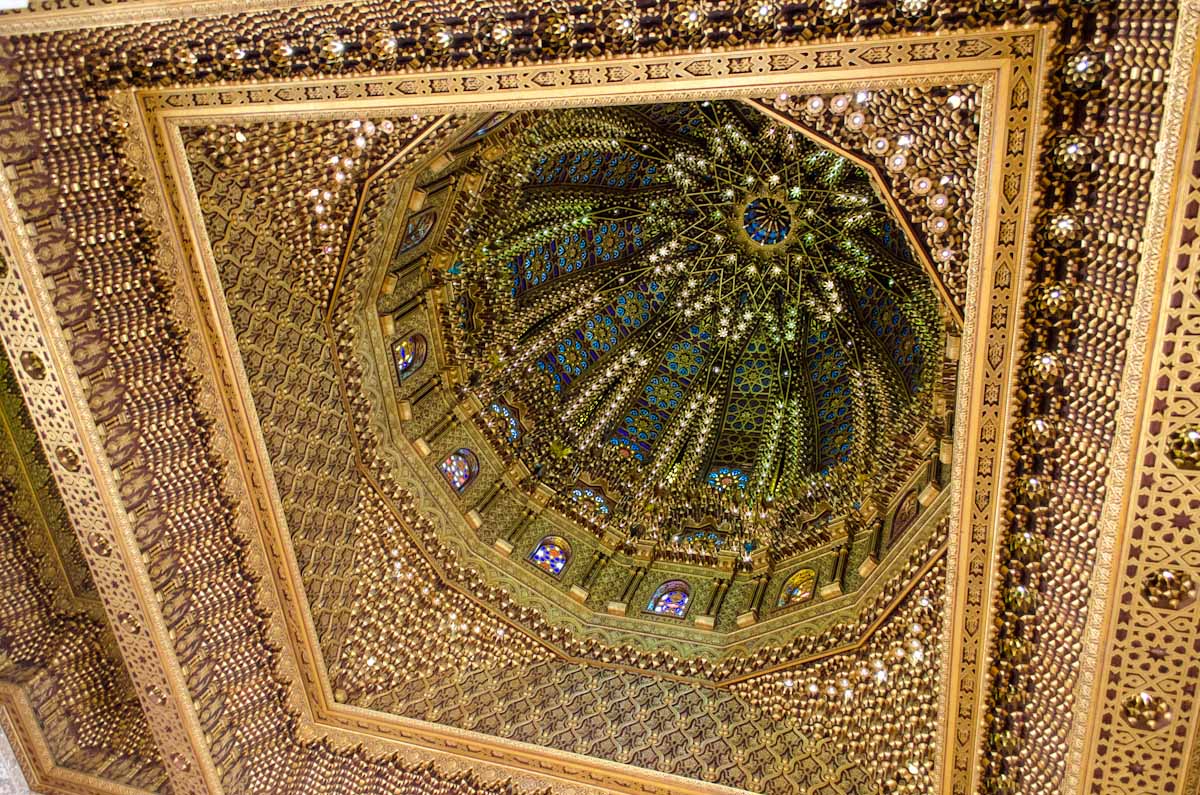 Ceiling of Mausoleum of Mohammad the V Door at Mausoleum of Mohammad the V Guard at Mausoleum of Mohammad the V

Chellah is located on the outskirts Rabat along the Bou Regreg River.  It is another great spot to escape the noise and crowds of Rabat.  Chellah was initially a Roman city named Sala Colonia. After the Romans abandoned the city a necropolis and mosque were then built over part of the ruins and the area was walled in. The ruins at Chellah are interesting, but what really captured our attention were the storks.  There are tons of stork nests around Chellah including one perched on top of the ruins of the minaret.  We were very lucky as we were there during March, which is the stork’s mating season.  The storks are usually nonverbal, however, during mating season they make a very unique clacking sound to attract a mate.  We enjoyed walking around the ruins and listening to the clacking storks.  We also discovered that Chellah is a great place to play hide and seek.  Sydney did an excellent job of hiding amongst the ruins. 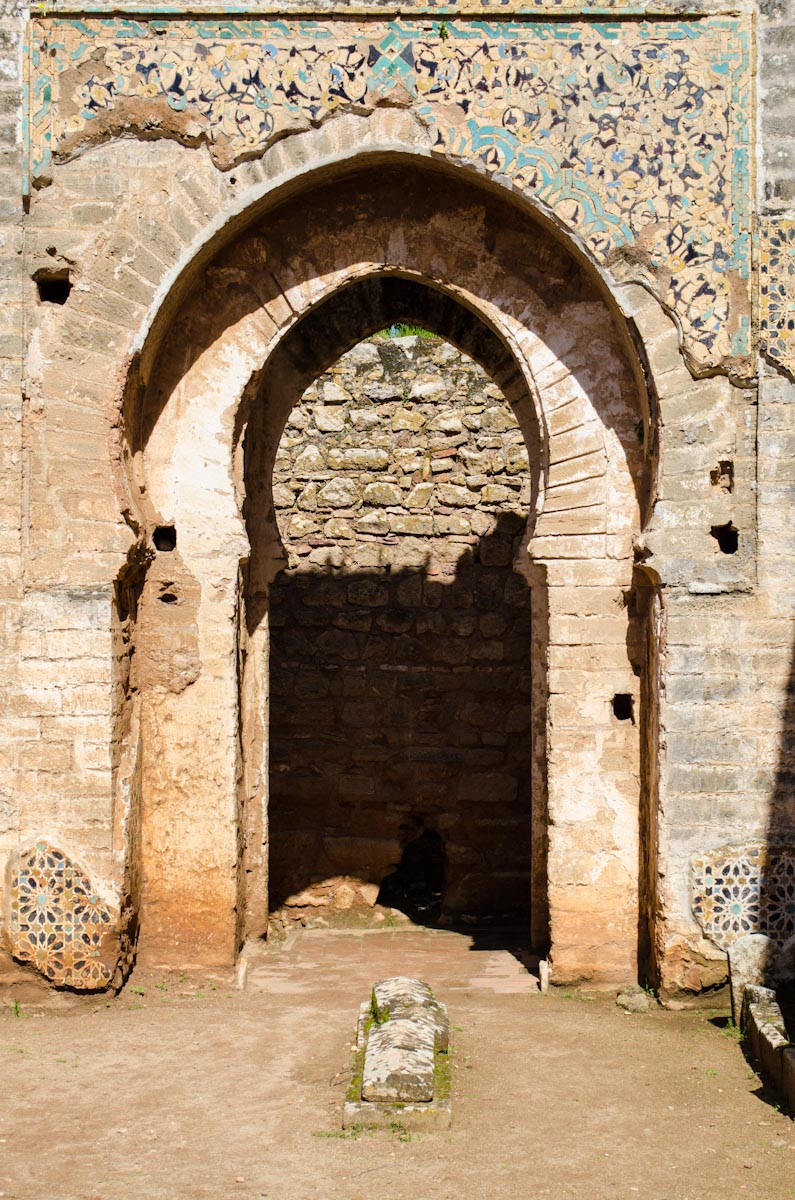 Old doorway with remnants of tiling at Chellah 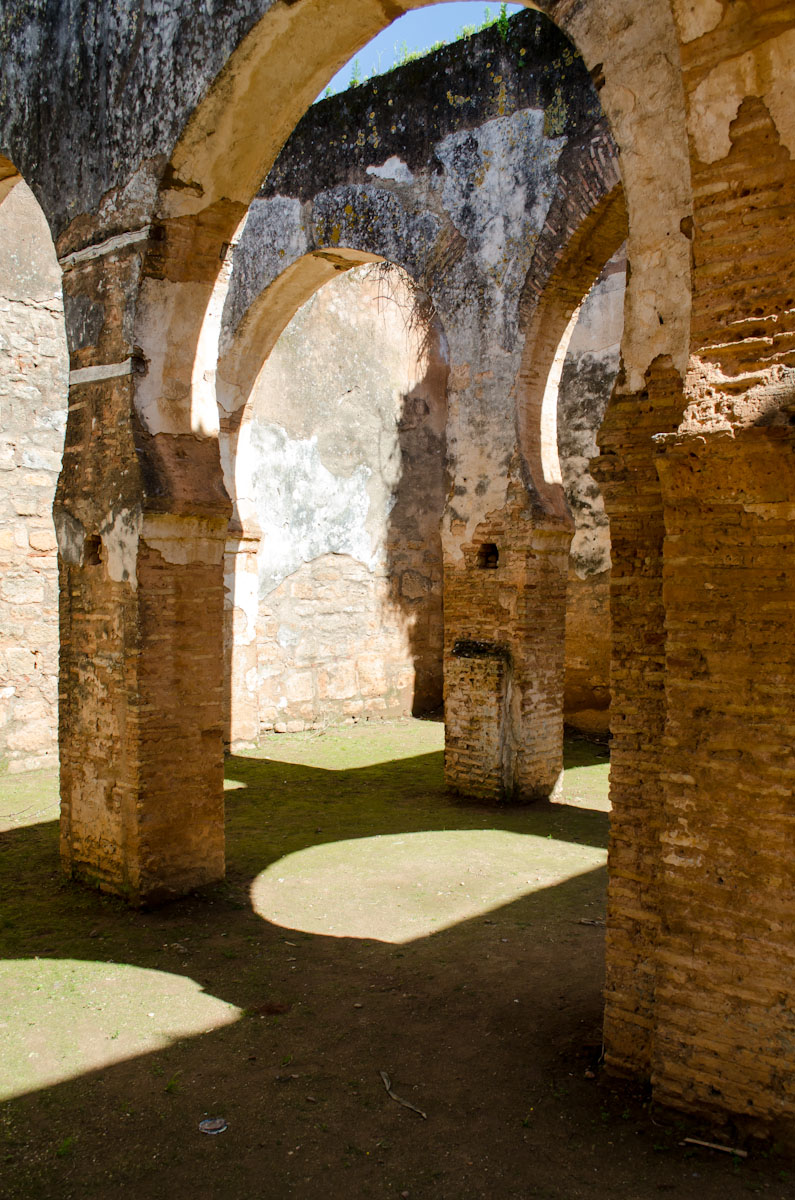 The Musee des Oudaias is housed in the former Palace of Moulay Ismail.  The Museum contains a great collection of jewelry and clothing from each of the regions of Morocco along with Roman and prehistoric jewelry.  Although the museum is small, it is still interesting and very cheap to get into.  But what makes this museum especially nice is the walled garden in front of it.  Many locals come to the garden to enjoy a picnic lunch or snack and to just sit and enjoy the moment.  In the garden are women who offer to apply henna to the hands or arms.  During our stay in Rabat we have frequently found ourselves returning to this garden just to sit and watch everything around us.  Sydney has become acquainted with one of the museum guards named Mohammad and he has been very nice to us.  During one of our visits Sydney spotted a tortoise and pointed it out to Mohammad.  Mohammad went and picked it up for Sydney to hold.  Sydney and I also finally took the plunge and allowed one of the women to apply henna.  Now the true test is to see how long it will take for it to wear off.  Warning to anyone who is thinking of having henna applied, it does take 2 to 3 weeks to wear off. 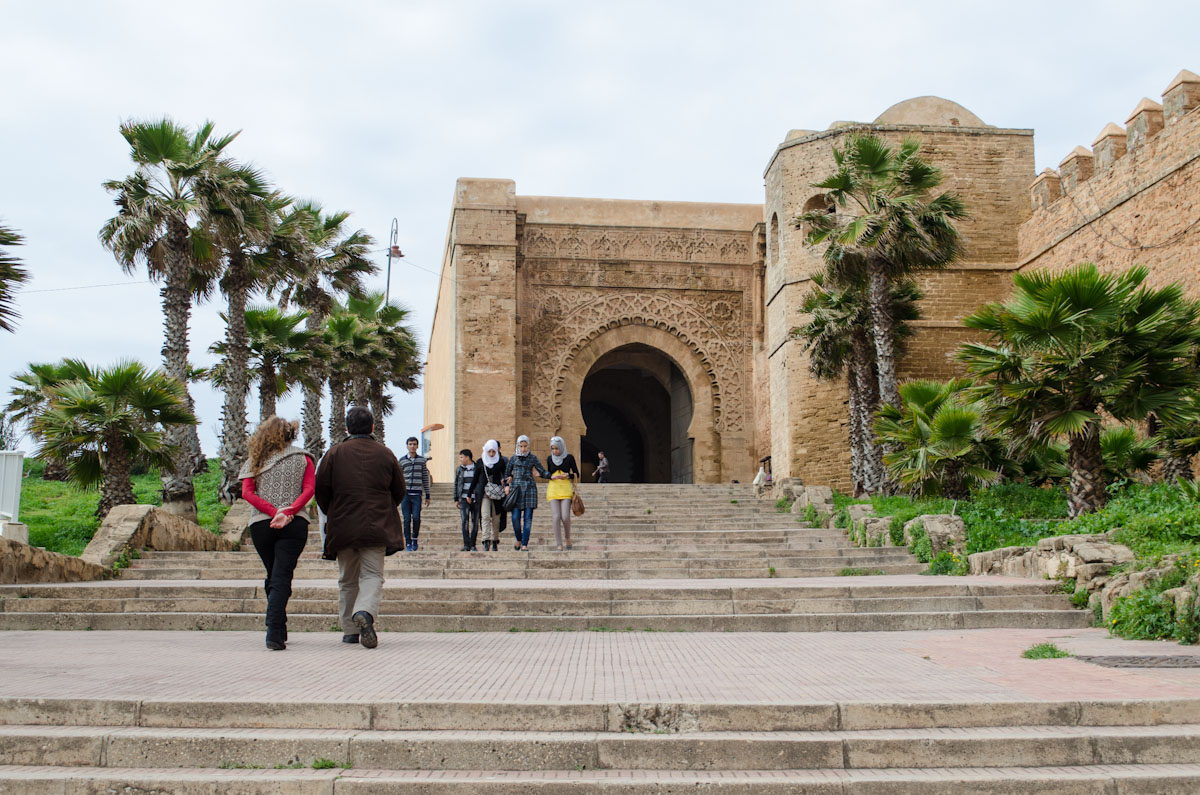 Entrance to the Musee 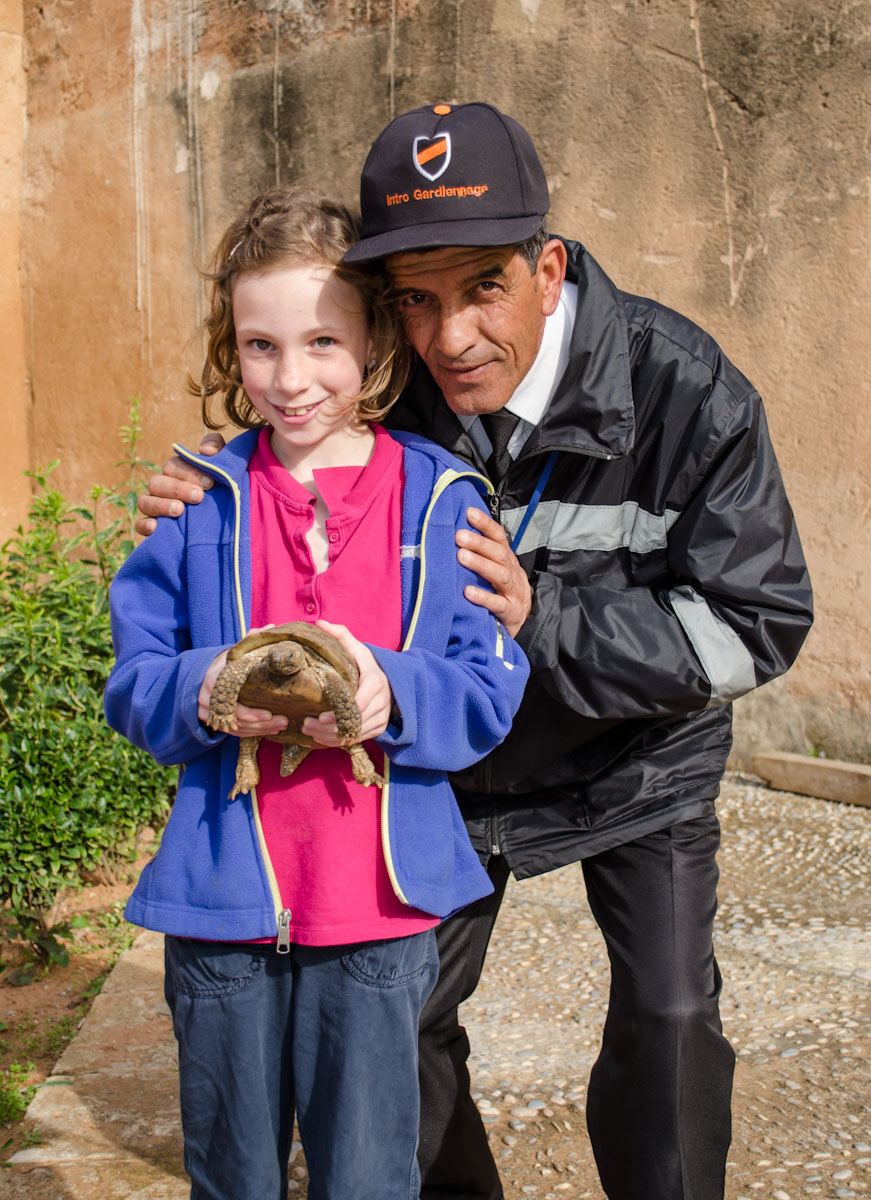 Mohammad and Sydney with a tortoise 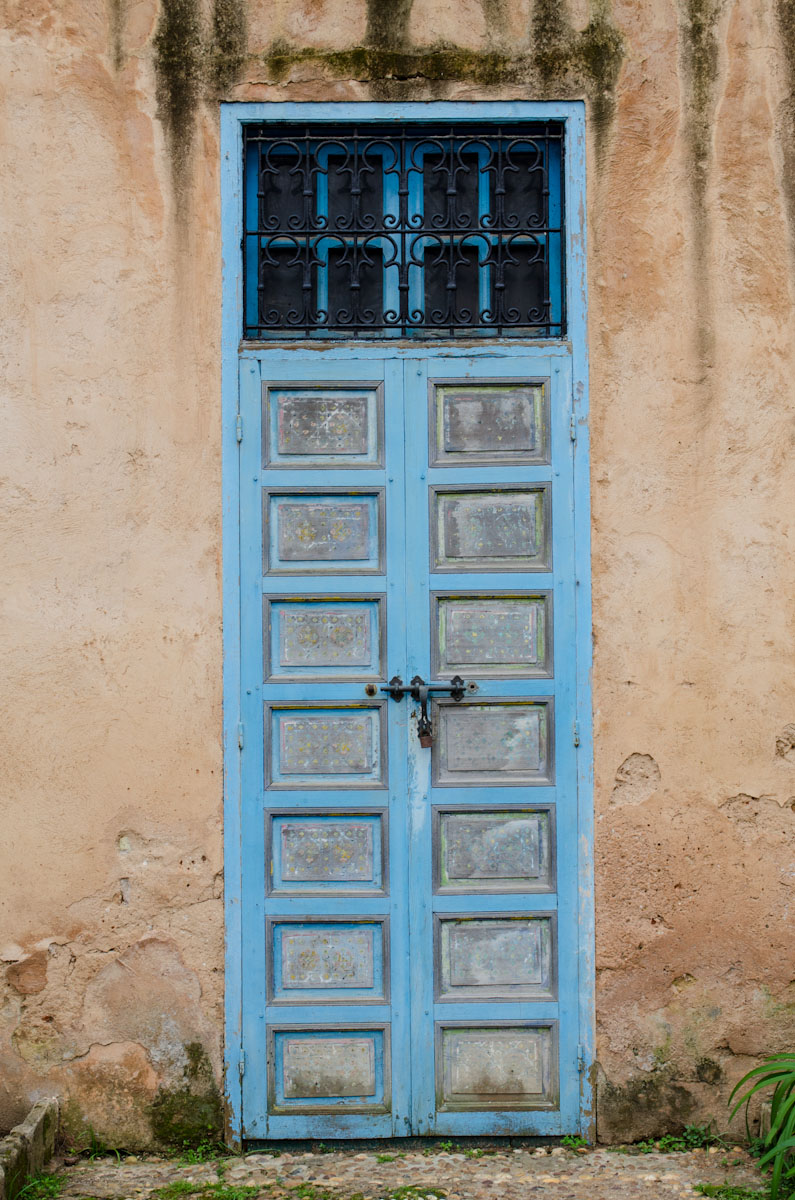 The Kasbah is perched on a cliff and is the oldest part of the city.  Below the cliff the Bou Regreg River and Atlantic Ocean meet.  The Kasbah has a pleasant feel with narrow winding streets and whitewashed houses trimmed in blue.  Many of these old houses have beautiful, old doors.  The streets of the Kasbah are narrow so few cars are seen.  It also consists of mostly residential houses making for a very low-key place to wanderer the streets. No dodging of traffic here in the Kasbah, which can be a relief after walking around other places in Rabat.  The Kasbah has a great viewpoint overlooking the Atlantic where we enjoyed watching the waves of the Atlantic Ocean. 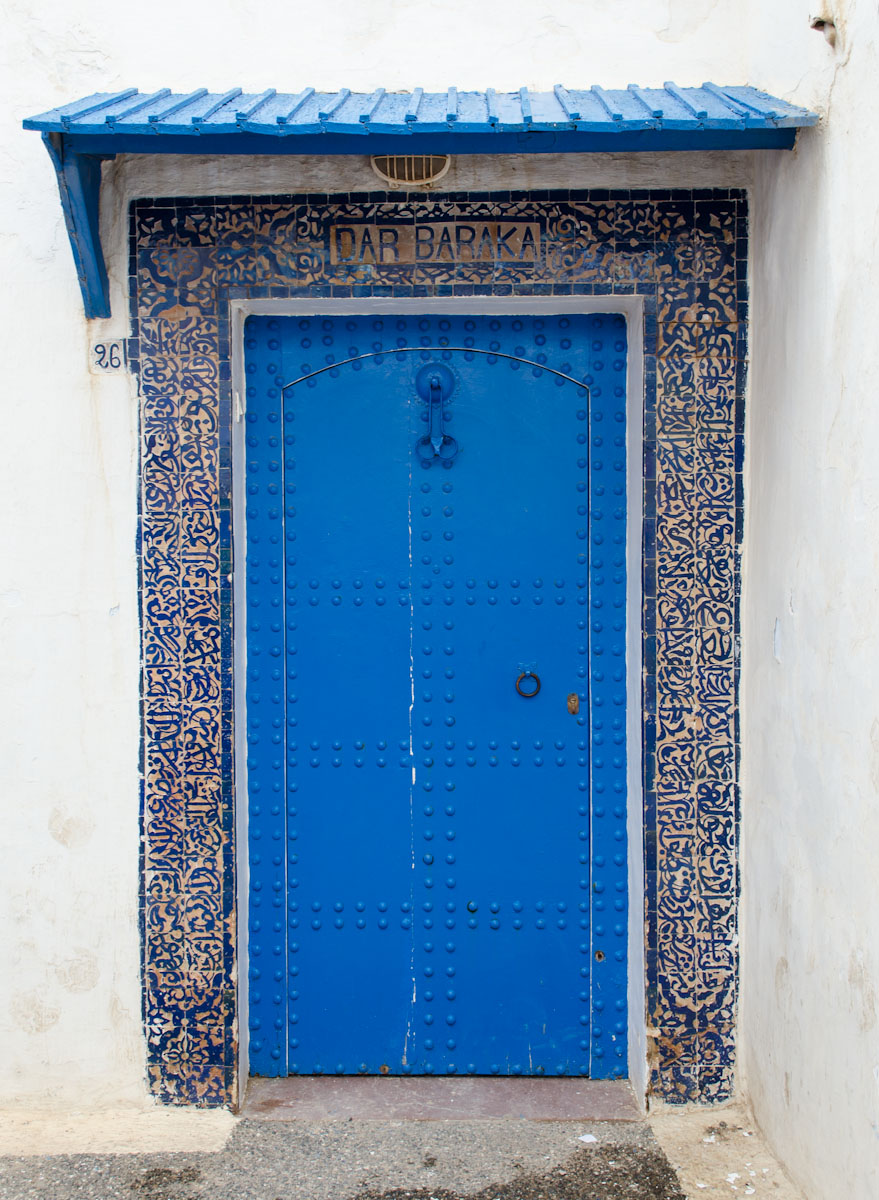 Door in the Kasbah 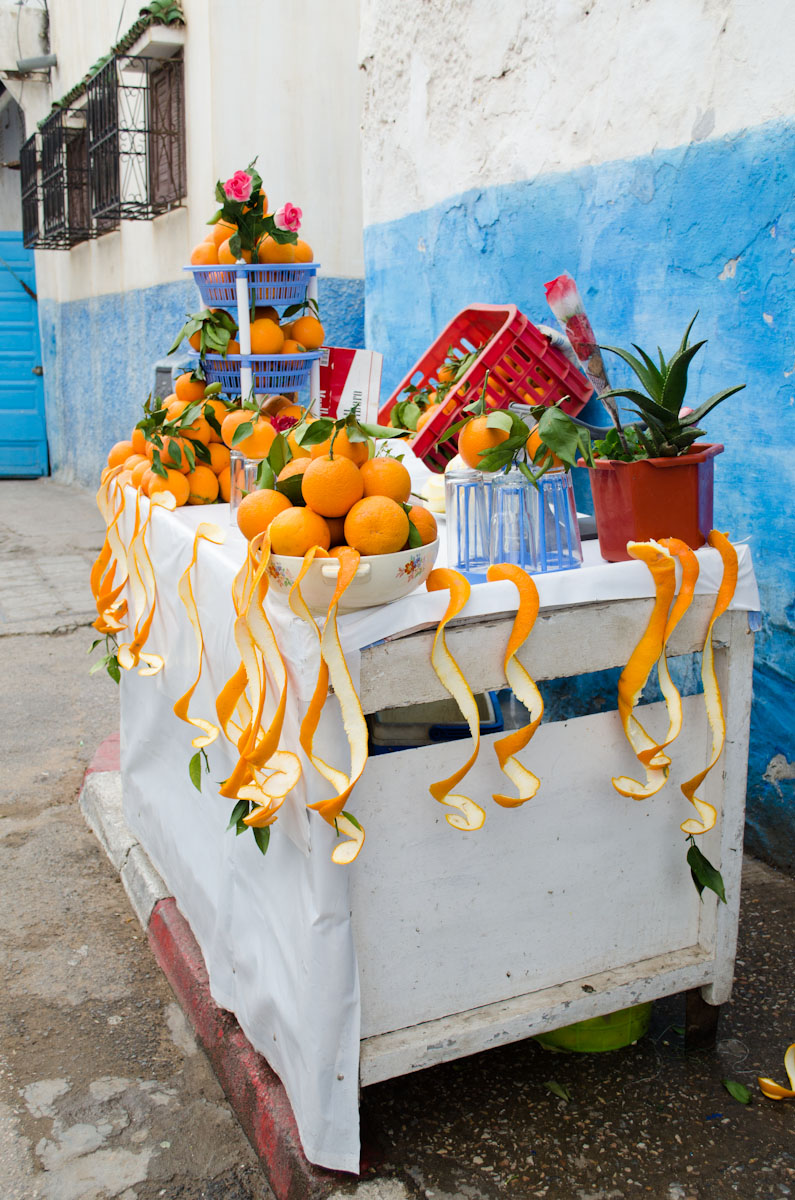 Orange Juice Stand in the Kasbah 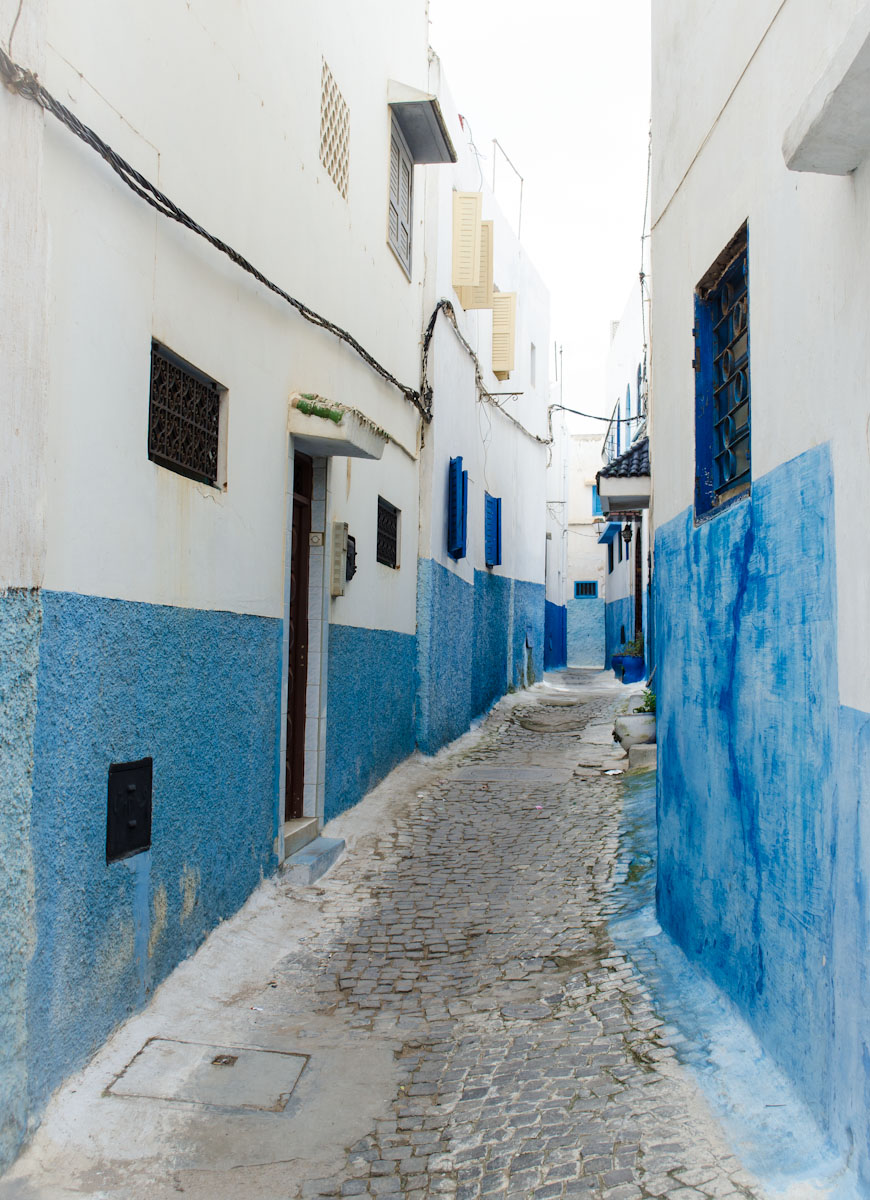 Alley in the Kasbah Doorway in the Kasbah

Although the museum looks unimpressive from the outside, it is well worth a look.  The museum contains many nice artifacts from prehistoric and Roman times found in Morocco including lots of bronze statues.  While visiting the museum, my husband, Jason, and I enjoyed looking at the intricate bronze statues.  Sydney however was having fun snickering at the male nude statues.  She would examine each statue and if it were a male she would announce, “Yep, that’s a male,” and start giggling.  Ah, I got to admit, those Romans never left much to the imagination.  Unfortunately, the museum does not allow photos.

Although the Jardin Exotique is not located in Rabat, it is a relatively short bus or grand taxi ride to the north and is worth taking the time to see.  Marcel Francois, a French horticulturalist, built the garden in 1951.  The garden is overgrown, but what makes the garden interesting is how it was designed. It is set up like a maze with tunnels, hanging bridges, and bamboo bridges.  Several hours can easily be spent wandering the gardens and climbing over and under things.  Sydney had fun acting as our guide around the garden.  There are also several ponds located in the back of the gardens where koi, turtles, and frogs can be spotted, much to Sydney’s excitement. 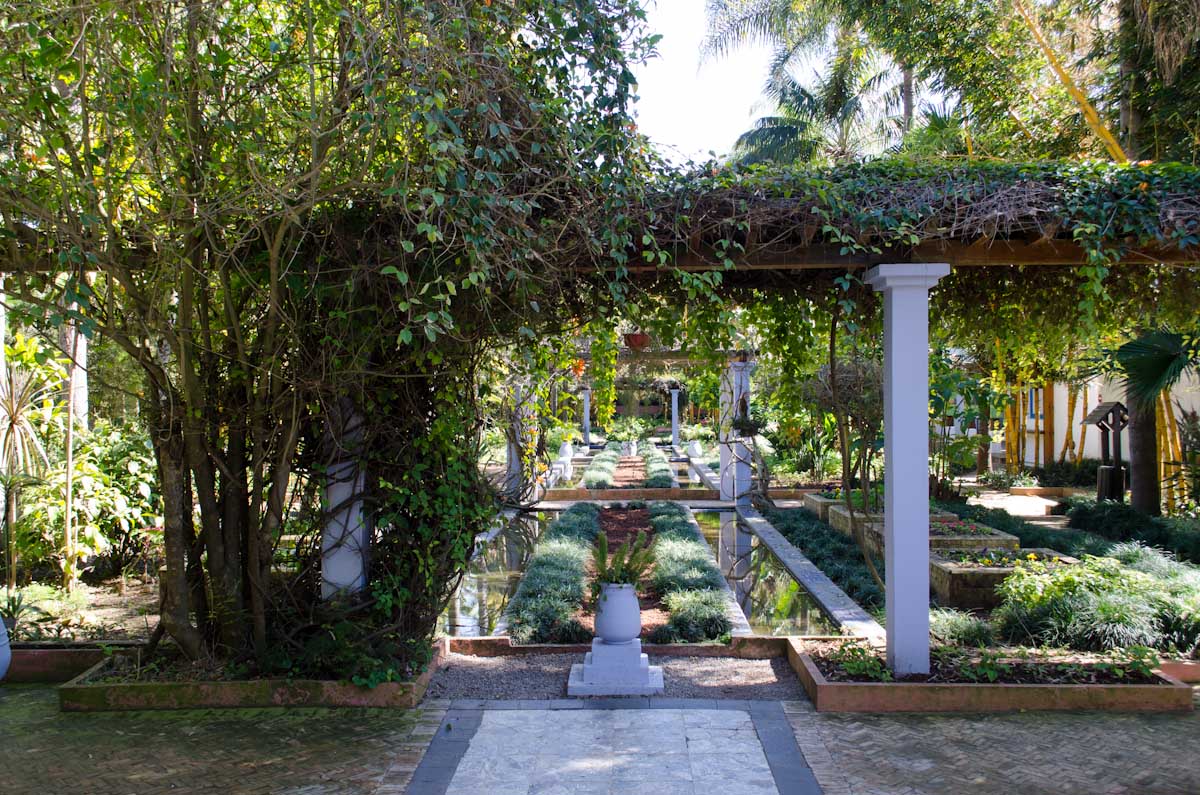 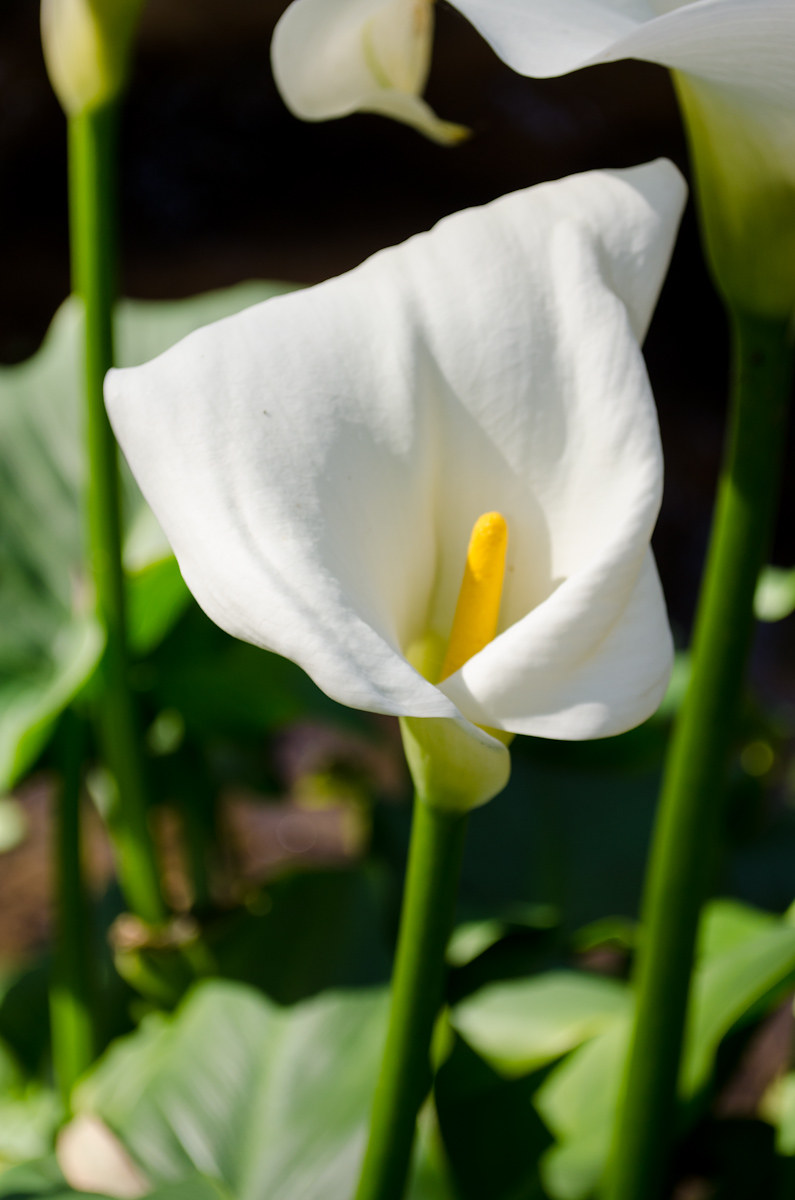 Flower at the Jardin Exotique

The Rabat Zoo is one of those surprising gems and is great place for anyone to visit; not just kids.  The Rabat Zoo has many of the animals one would dream of seeing on an African safari including elephants, lions, rhinos and hippos.  What is really nice about the zoo is that most animals look like they are in their natural habitat and not in cages.  What made our visit even better was that we practically had the place to ourselves the day we went.  No crowds and a natural looking habitat, what more could on ask for in a zoo? Lions at the Rabat Zoo 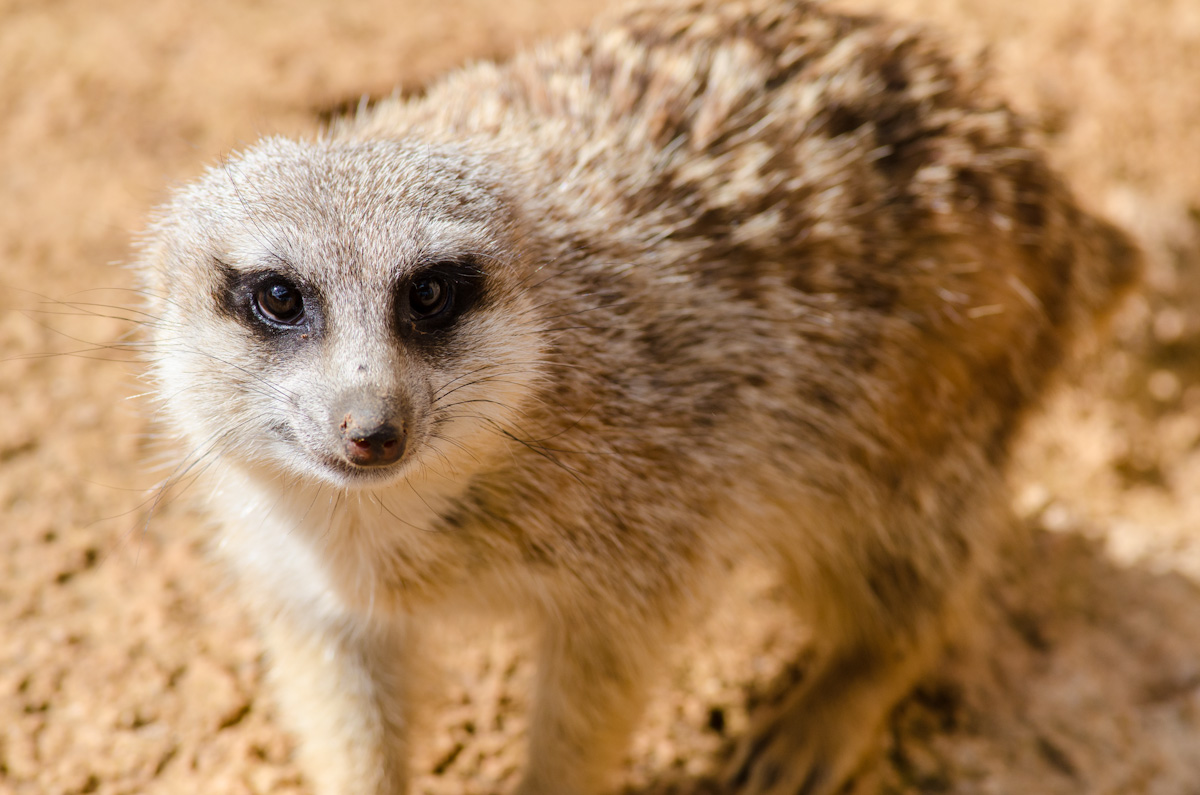 Meerkat at the Rabat Zoo 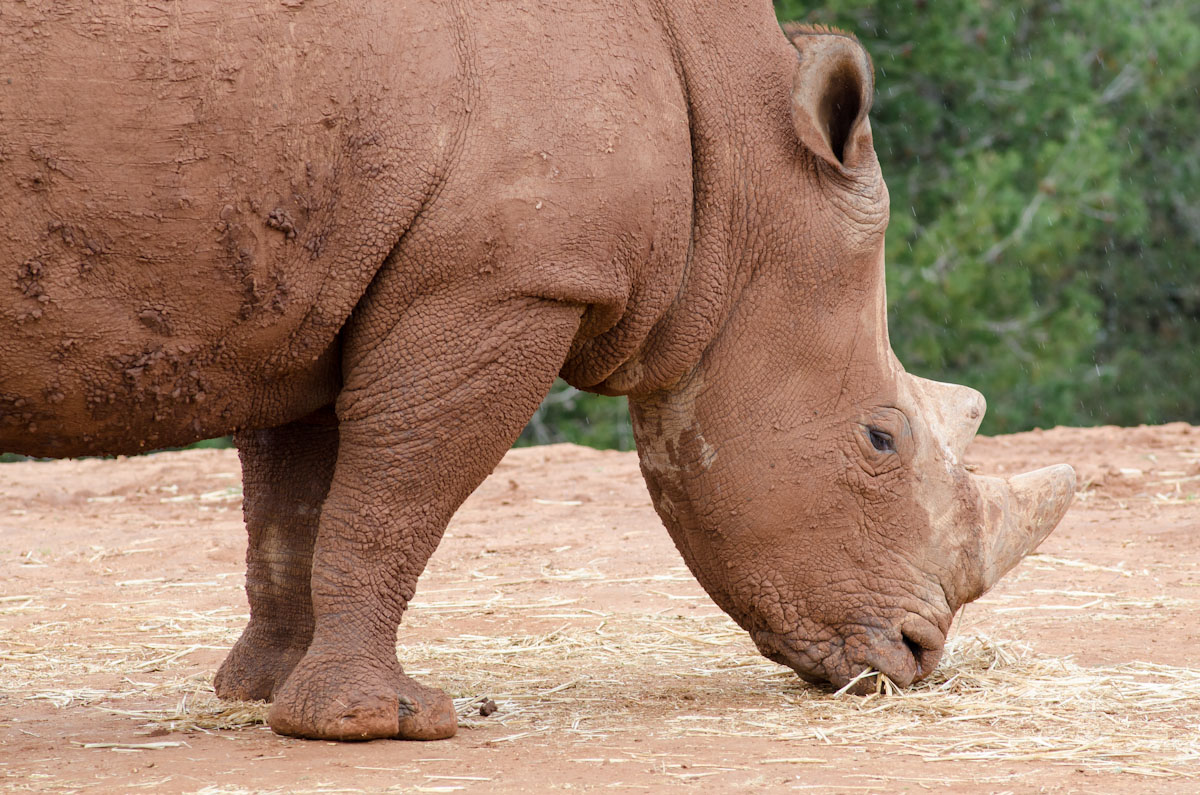 White Rhino at the Rabat Zoo

And of course, no trip to Morocco is ever complete without visiting a Medina.  Unlike Fez, which has a winding labyrinth of alleys, the Medina in Rabat is easy to navigate.  I have heard that being trapped in the Fez Medina will drive you to madness or tears just trying to escape.  However, the Rabat Medina is not like Fez.  It is very low-key for a Medina and you will not get hassled or pressured into buying stuff.  The Medina has anything and everything that you could possibly want to buy from souvenirs to fresh produce to flat screen TV’s, and much to Sydney’s delight, pets of any kind. 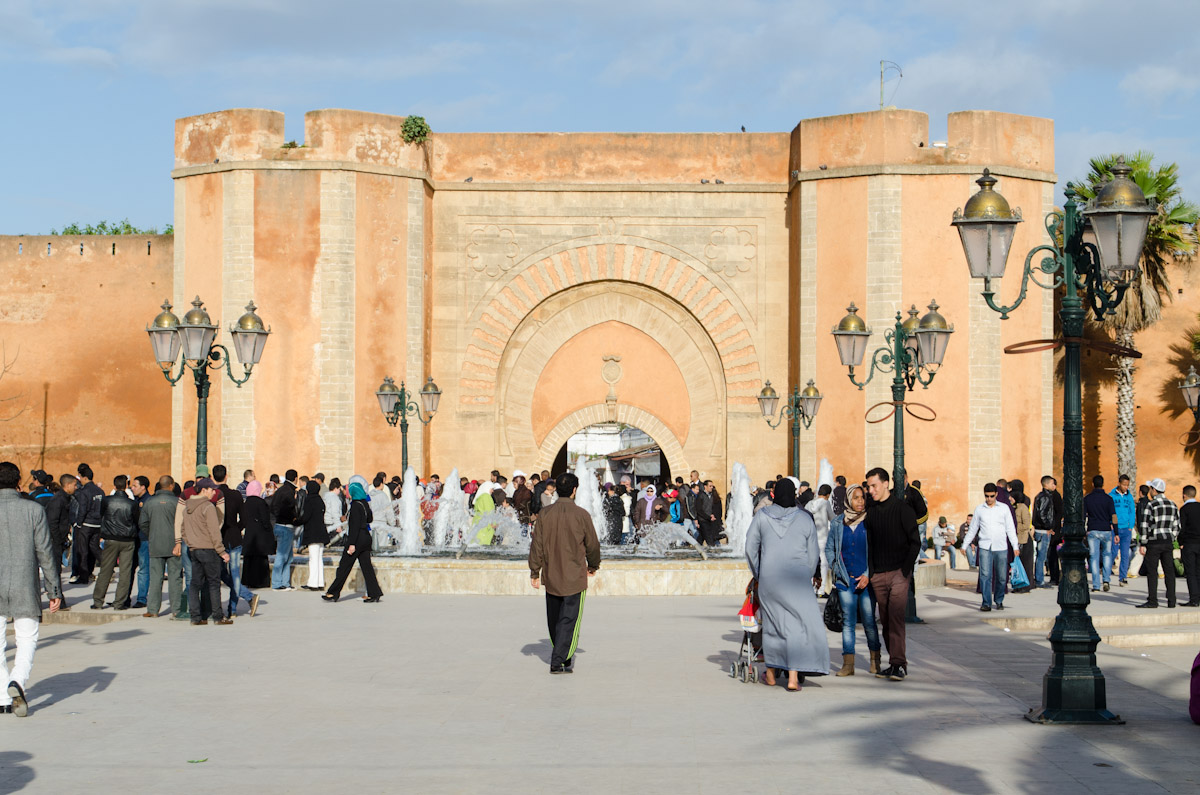 Entrance to the Medina 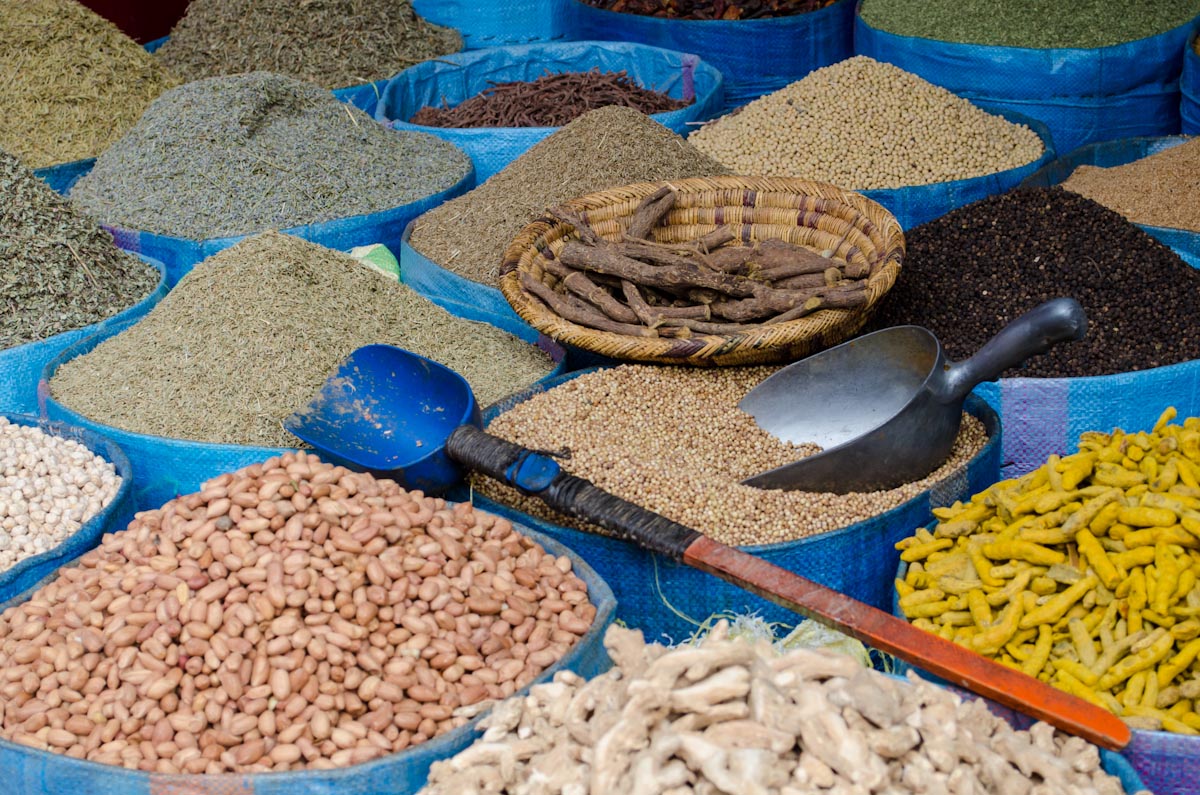 Spices and beans in the Medina As our month stay in Rabat has progressed the more I have come to appreciate its beauty and uniqueness.  I have also come to realize that Morocco has a lot to offer if one takes the time to truly look.