Jason and I frequently joke that if we were to write a book about our around the world adventures it would be titled, “Travel-Junkies: Just Out Looking for Romans.”  It seems like those Romans were practically everywhere and as we have traveled, I have developed a “slight” obsession with anything Roman.  When our guidebook mentions Romans ruins, I know that I must see those ruins.  When I found out that Morocco contains this amazing Roman site called Volubillis and it is an UNESCO world heritage site to boot, I just knew we had to go. 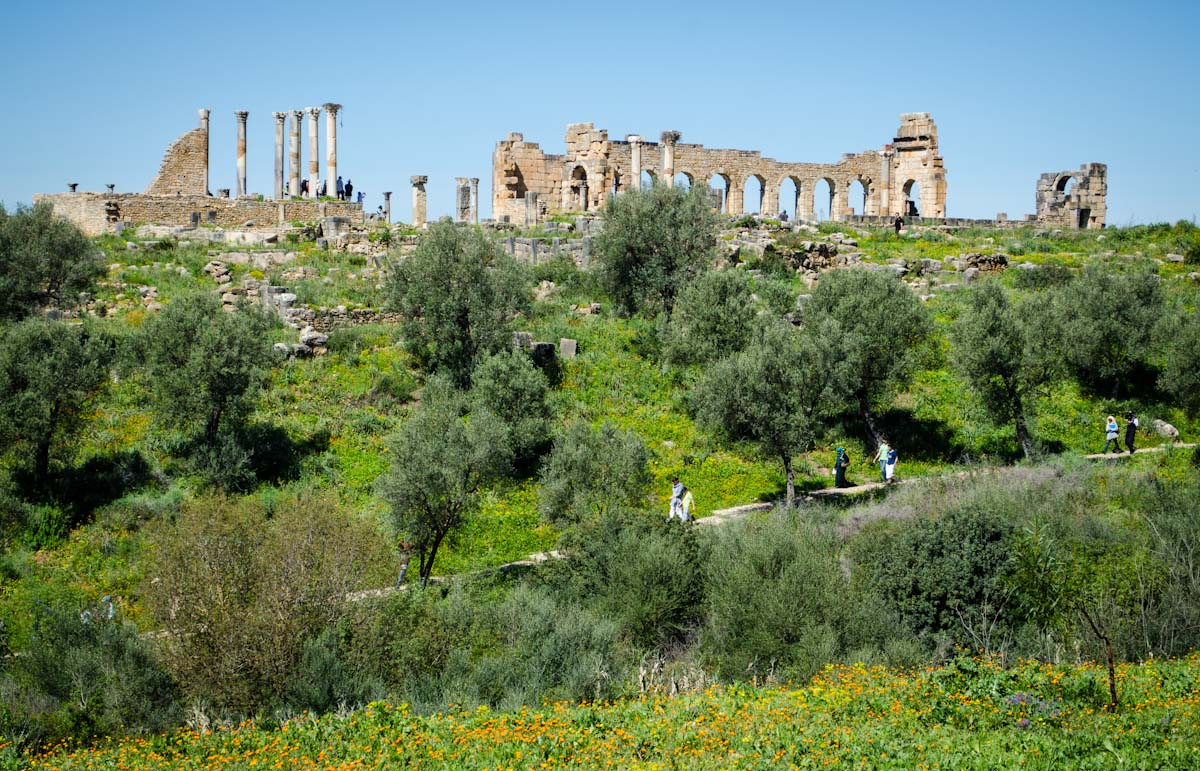 When I mentioned my desire to see Volubillis, Jason raised his eyebrows and said, “I don’t think so!”  He had imagined that Volubilis was out in the middle of nowhere and sounded like it would be difficult to reach.  Initially, it looked like we would need to take a train to Meknes and then negotiate with a grand taxi to take us to Volubilis, have the taxi wait, and then have the taxi take us back to Meknes.  After a big scene with a grand taxi over cost when we first arrived in Morocco, we had avoided taking the grand taxis.  Jason was envisioning that an argument or mistranslation/miscommunication would occur, resulting us being broke and/or stranded at Volubillis until goodness knows when. Fortunately for me, after further research, Jason found that there was a town called Moulay Idriss very near the site and that there was another option besides the grand taxi for transportation.  Well at least to Moulay idriss, the city bus. 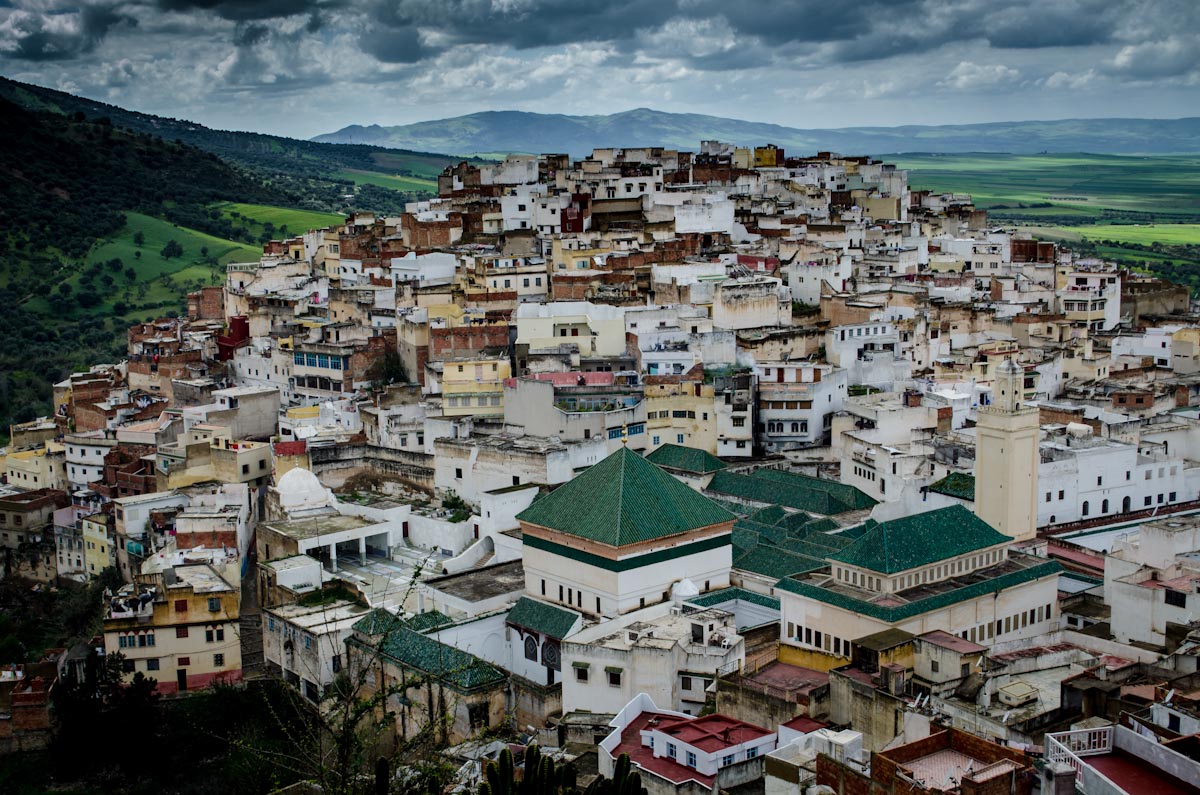 After convincing Jason that we really needed to see Volubillis, we decided to make it an overnight adventure where we would spend the night at Moulay Idriss and then walk over to Volubilis in morning.  We had a lovely night at Moulay Idriss and the next morning after a delicious breakfast, we walked to Volubilis.  It was about a 45-minute walk along wheat fields and ancient olive trees.  We found it to be very peaceful.  When we arrived at Volubilis, there were several tour buses already there and along with tons of tourists. 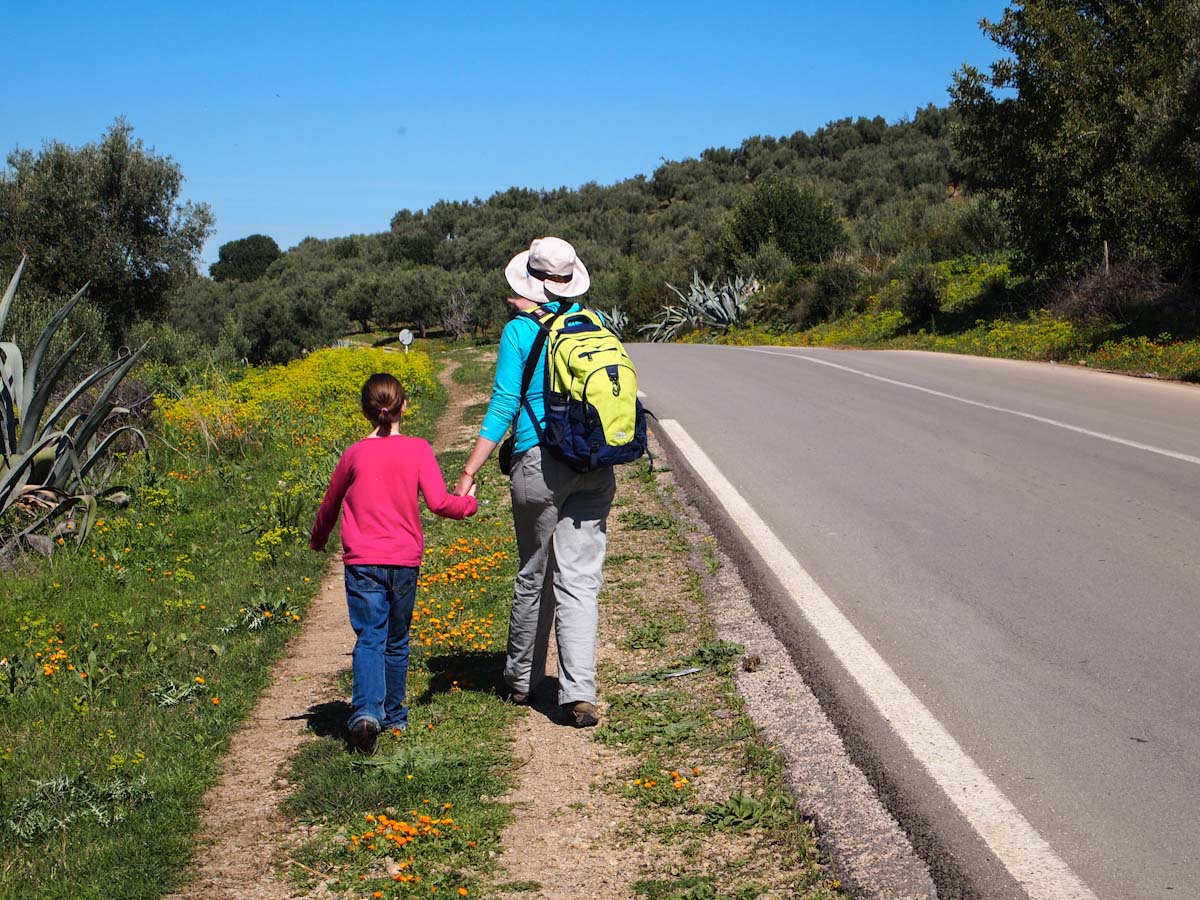 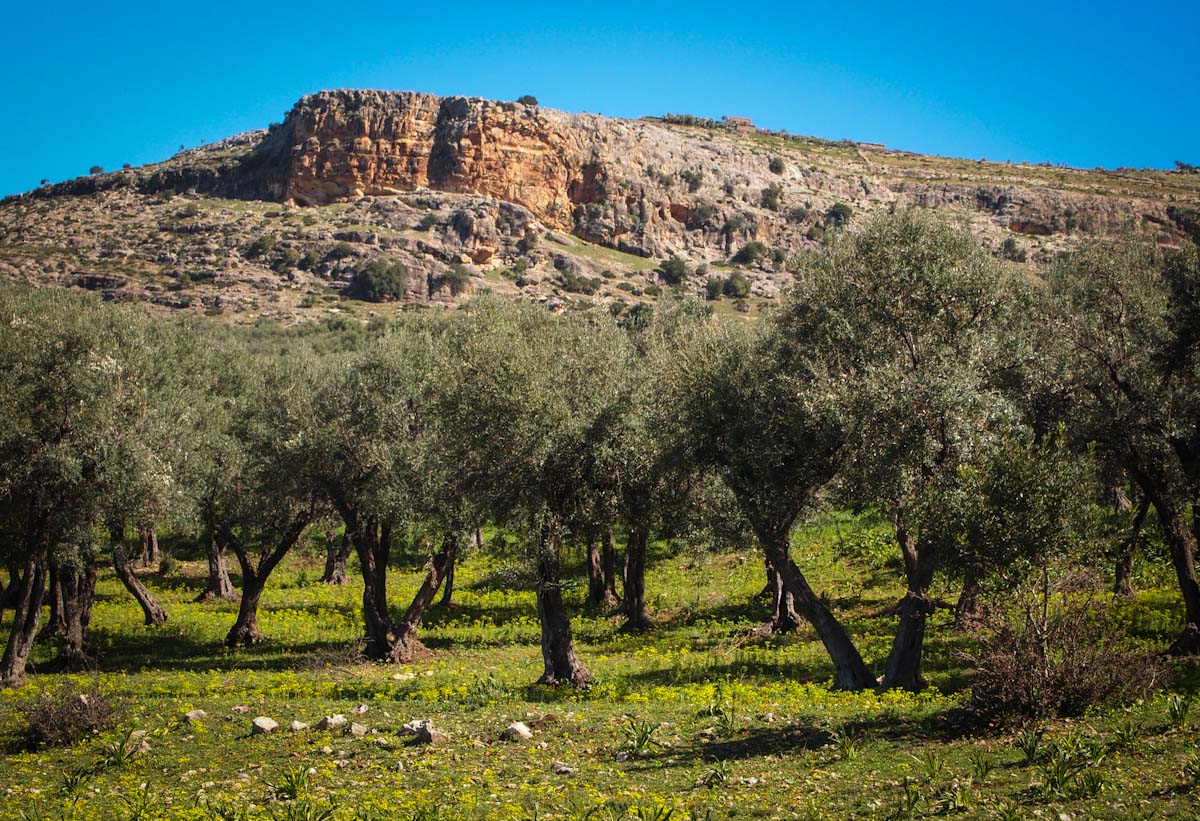 After seeing Volubilis, I can see the attraction.  Volubilis is set in a peaceful green valley and is known for its’ wonderful mosaic floors.  There is just not one mosaic floor at Volubilis, but numerous ones that are well preserved.  The mosaic floors depict animals, intricate patterns, and Roman Gods including Diana and the 12 tasks of Hercules.  It was really impressive.  Pictures cannot even begin to capture the detail. 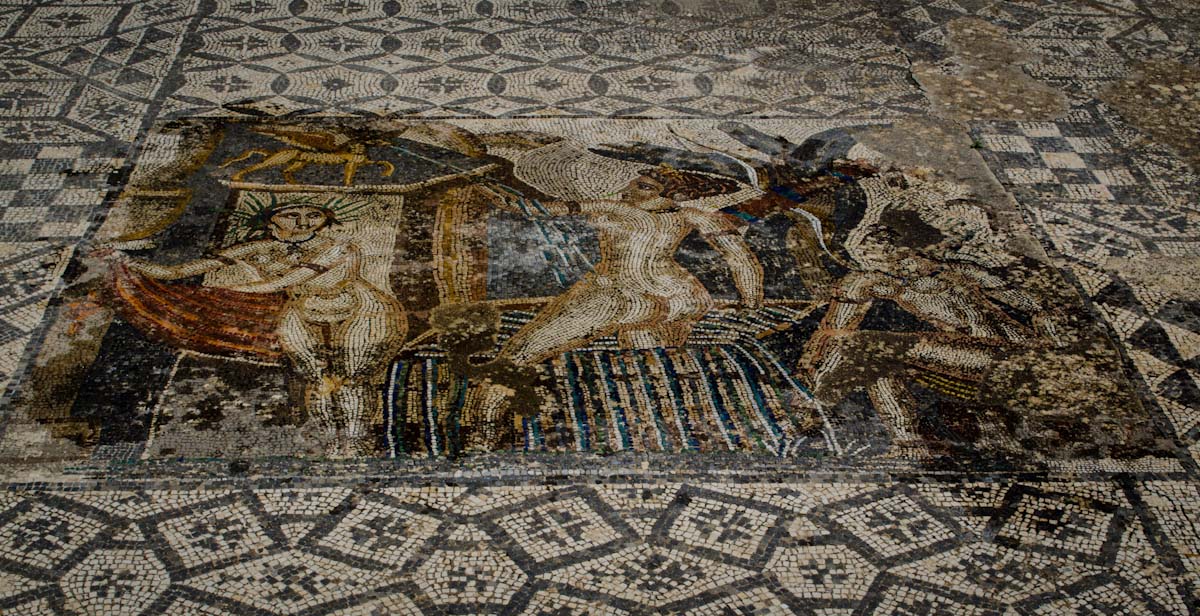 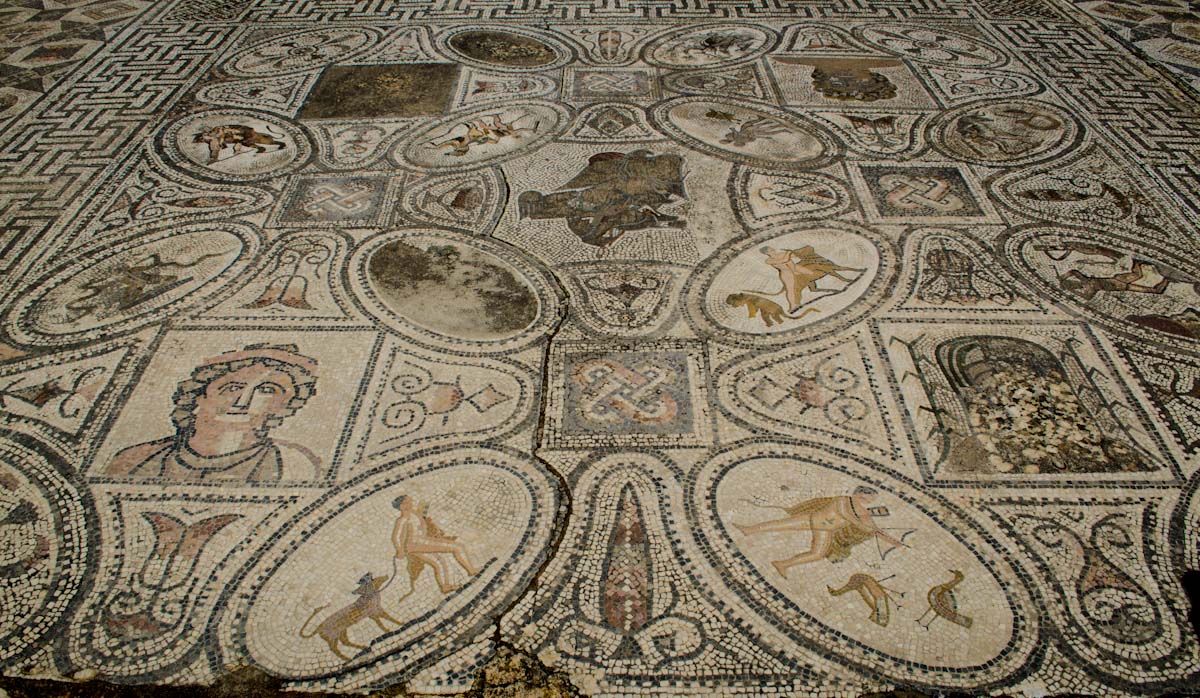 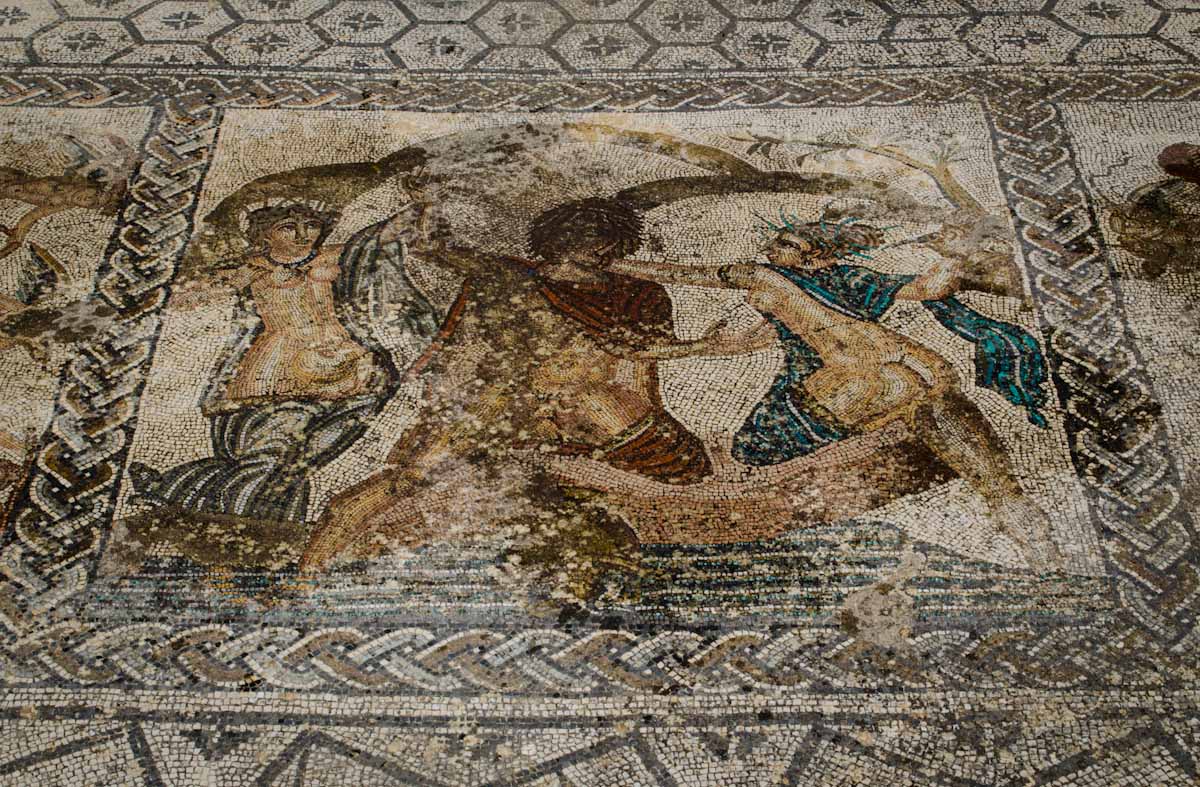 We had initially thought we would spend only a couple hours at Volubilis, but before we knew it, it was late afternoon.  Volubilis seems to go on forever and there seems to always be just one more thing to see.  While exploring the ruins, we also met several couples.  One was an American couple currently living and working in Paris.  After 4 months of being in non-English speaking countries, we were excited to speak with someone other than ourselves in our native language.  We spent over an hour talking with them in the hot sun resulting in sunburns!  We also met an Italian couple that is currently riding a motorcycle across Morocco.  They just laughed when we asked about driving in Morocco.  They stated that if you can drive in Rome then you can drive anywhere.  I applaud them because those Moroccans are some of the craziest drivers I have ever seen. 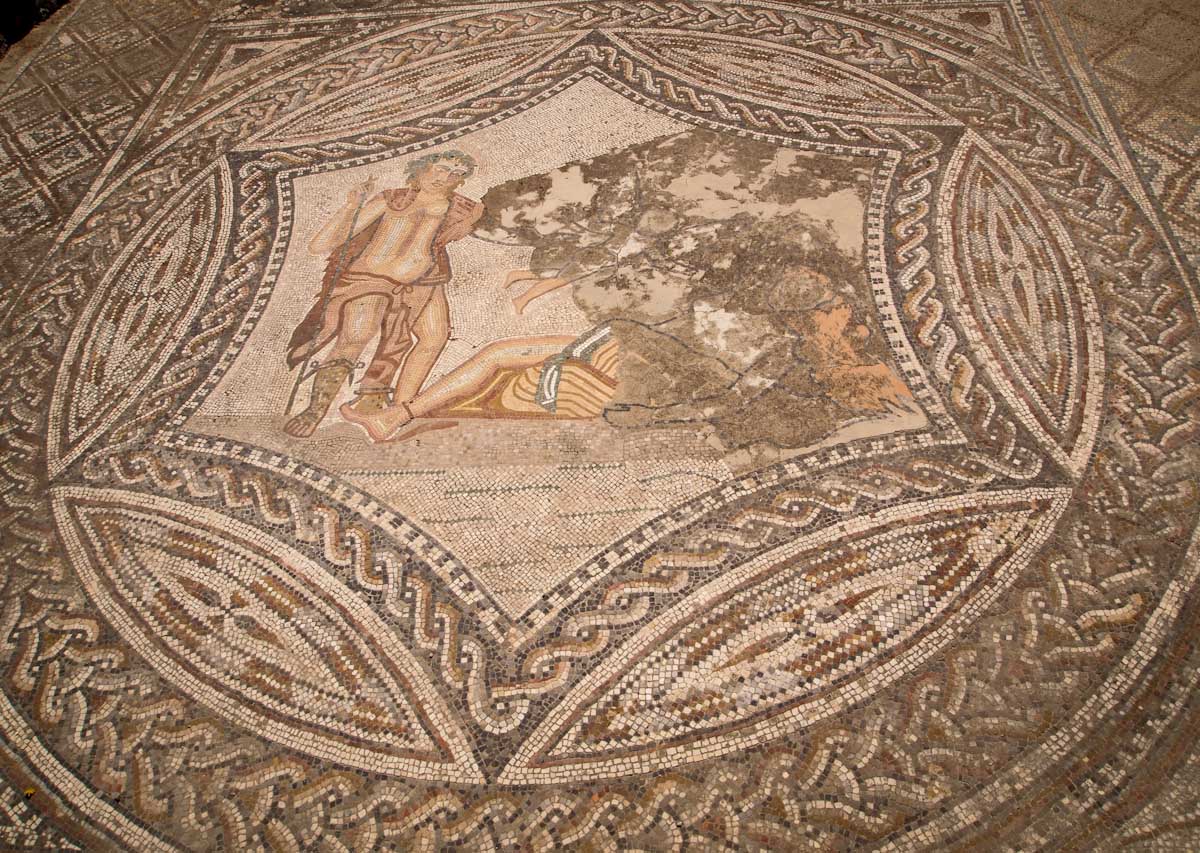 After spending most of the afternoon enjoying wandering around Volubilis, sadly it was time to say goodbye.  I could have easily spent much more time exploring the ruins if we did not have a train to catch. If you are planning a trip to Morocco, I highly recommend adding Volubilis to your list of sites to see.  You will not be disappointed. 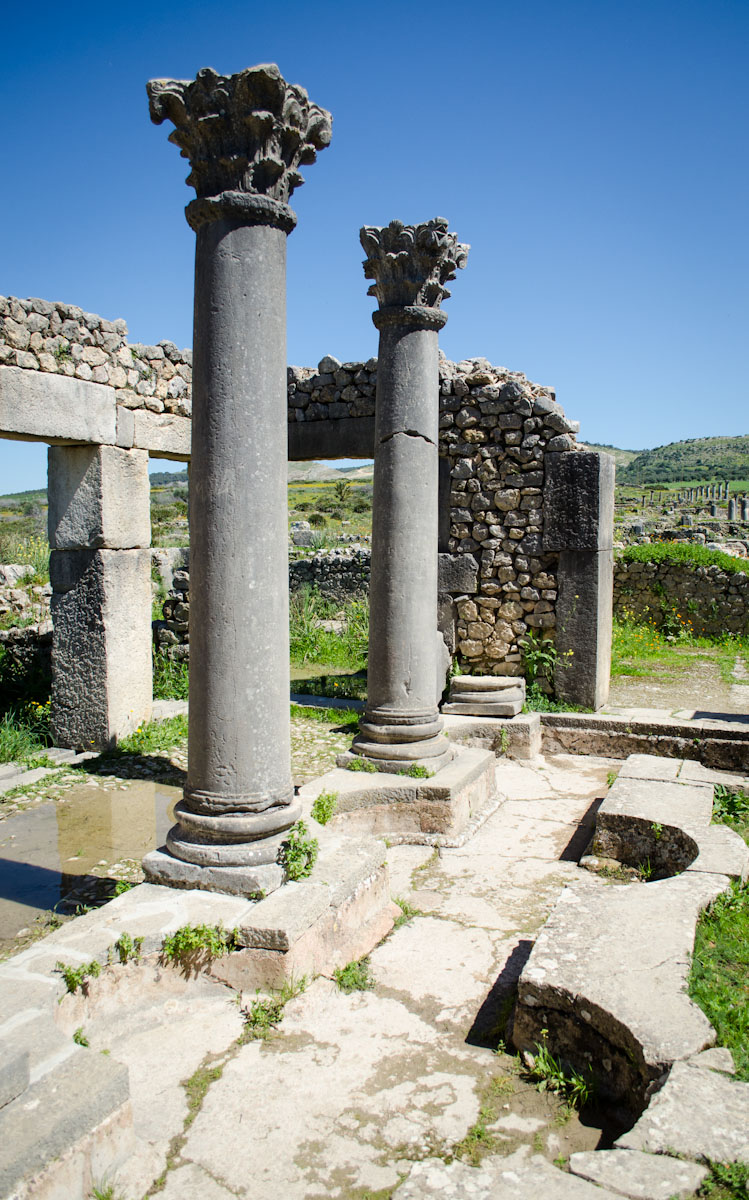