It seems every travel book about Ireland loves the 120-mile long Ring of Kerry and no organized tour would ever miss it on their itinerary. With so much hype, I assumed it would be spectacular. I assumed wrong! Driving the famous Ring of Kerry was rather boring, and in my opinion, overrated.

The weather had been volatile the last few days and it looked sunny when we woke up. The weather forecast had said the weather should be nice, so we decided to drive the Ring of Kerry. We left our rental house near Bantry expecting to spend an exciting day driving the Ring. Our Rick Steves travel guide on Ireland suggested we travel in a clockwise route, which went against our road atlas recommending a counter-clockwise direction. Since we were following the guidebook we decided to go in a clockwise direction and start in the town of Kenmare. The road from Bantry to Kenmare is narrow with a lot of tight curves, which would have been a lot of fun if we had had a performance car. Unfortunately, our tiny Nissan Micra rental car had a mushy suspension and the car rolled around each corner so I kept our speed within reason, which still created screams of terror from the wife and daughter. As we entered the picturesque town of Kenmare we turned left and started our tour of the Ring of Kerry.

As we drove I asked my wife Kerri, “Is this is?” It looked just like anywhere else on the western coast of Ireland and I was confused as to why people flock here like moths to a flame. Kerri, having toured the Ring of Kerry 15 years earlier with her grandmother, assured me that this was it. In fact, Kerri even commented that it didn’t look as amazing as she had remembered. 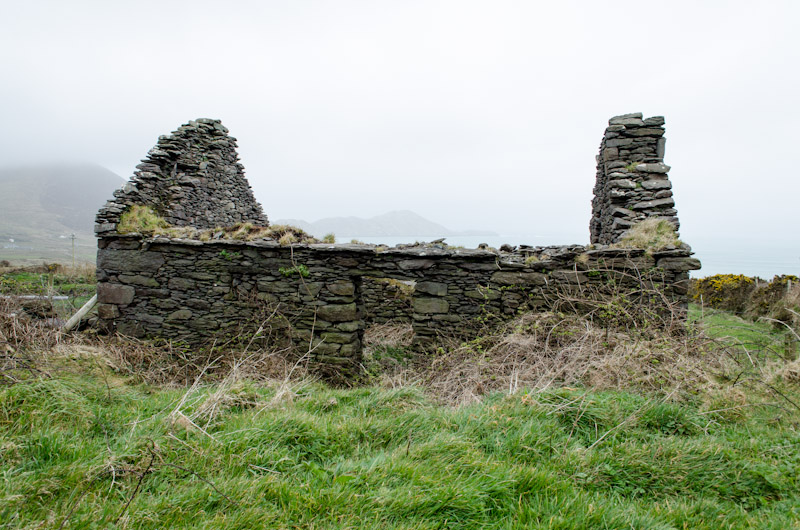 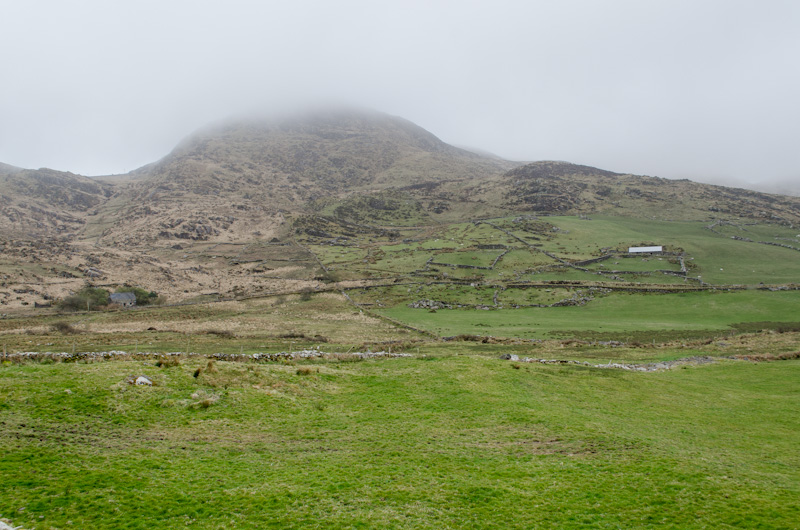 We had been in western Ireland for 10 days already and had done a lot of exploring on the Sheeps Head peninsula and found the Ring of Kerry to be of similar terrain. The landscape is very barren and rocky with a narrow 2-lane road (N70) running through it. We were excited when we finally came to the small town of Sneem and decided that we should stop for a cup of coffee before falling asleep from the dullness of the drive.

Once back on the road we decided that we would stop at the Staigue fort just 3 miles west of Sneem. I had imagined some kind of military fort, but was surprised to find a stone ring fort that was built around 300-400 A.D. and was actually fun to visit. On the way back down to the N70 we had a couple of problems with stubborn sheep not wanting to get out of the road, but after a few honks of the horn we had them running down the road much to the delight of my daughter. 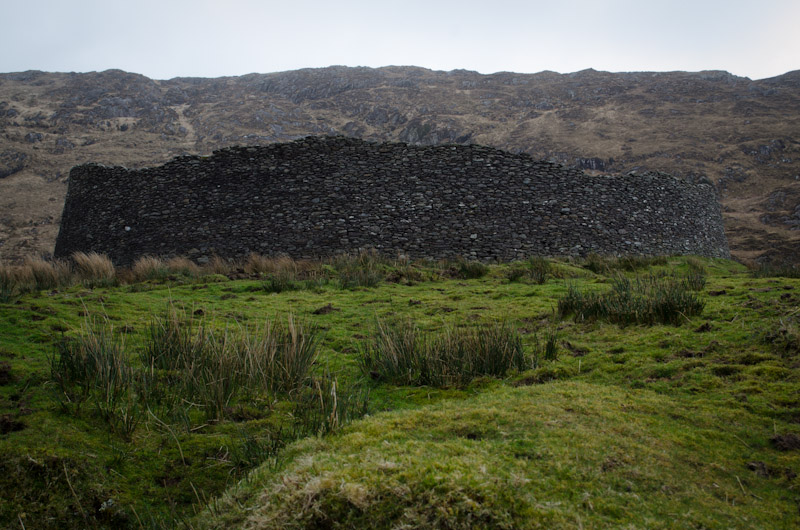 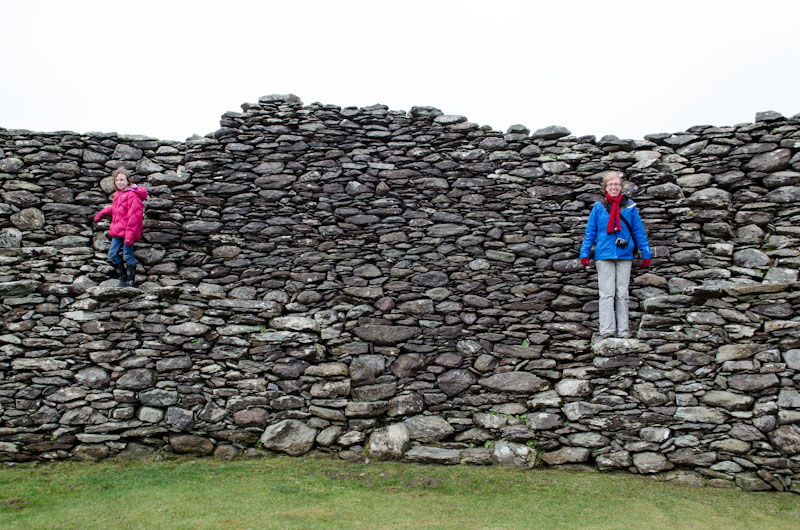 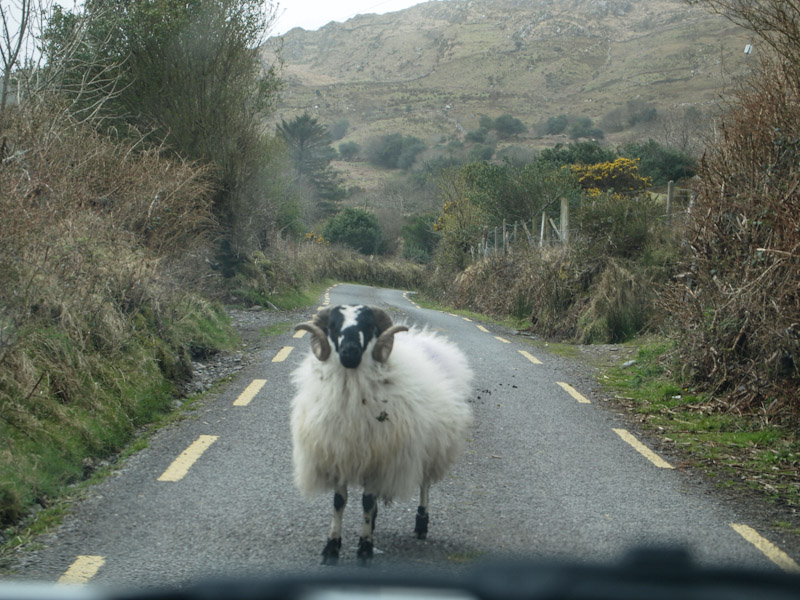 Back on the highway we soon came to Carrol’s Cove, a nice sandy beach with a trailer park and Ireland’s only “Beachside Bar.” We thought it looked like the perfect place to enjoy our packed lunch and walk on the beach. 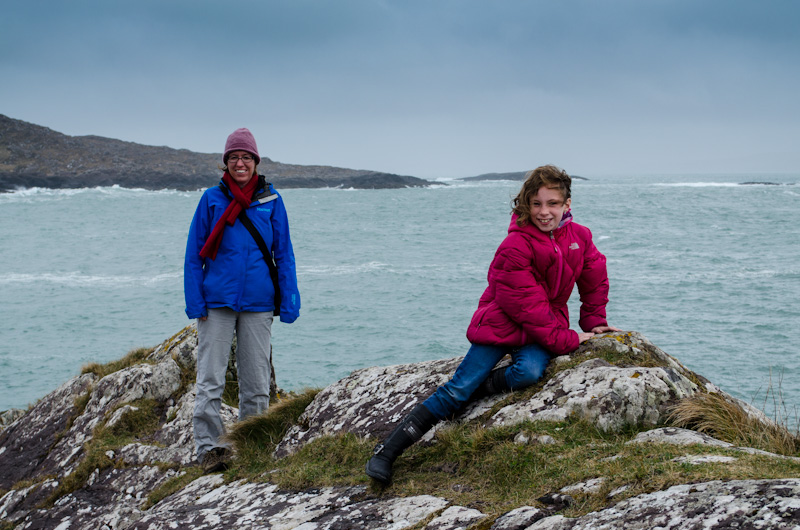 Kerri and Sydney at Carol’s Cove 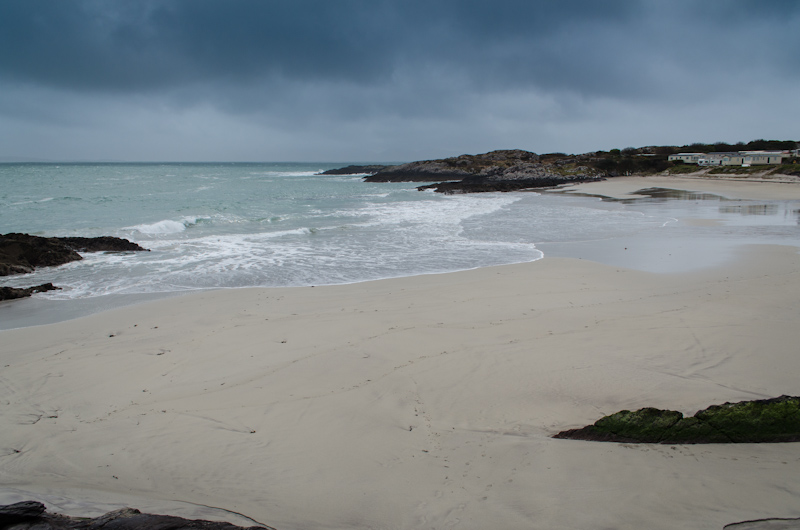 After Carrol’s Cove we began heading uphill towards Coomakesta Pass. The weather had turned to rain and wind and our nice day did not look so nice anymore. Once at the pass we pulled onto a turnoff with a statue and a couple of guys huddling with some sheep. We tried to get out of the car, but found the wind so strong we could barely open the doors. After some hard work we got them open and tried to get a couple of photos before being blown off the pass. 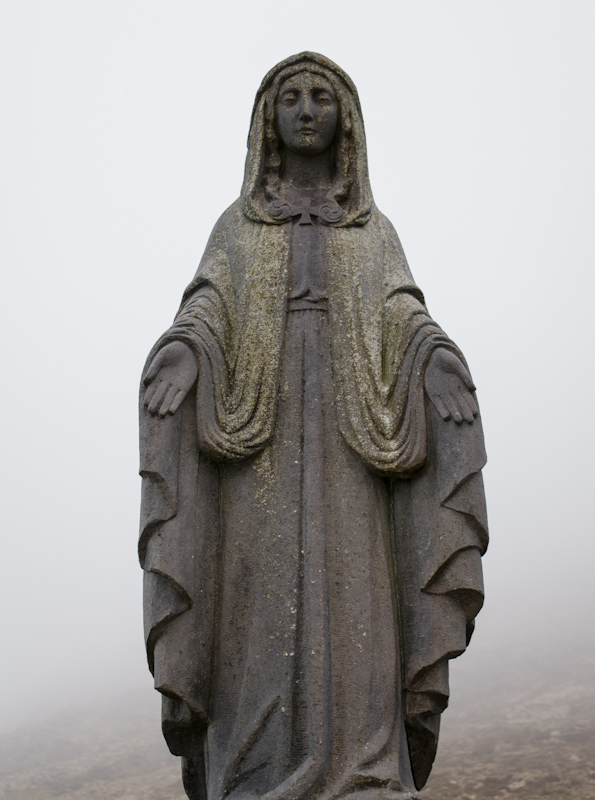 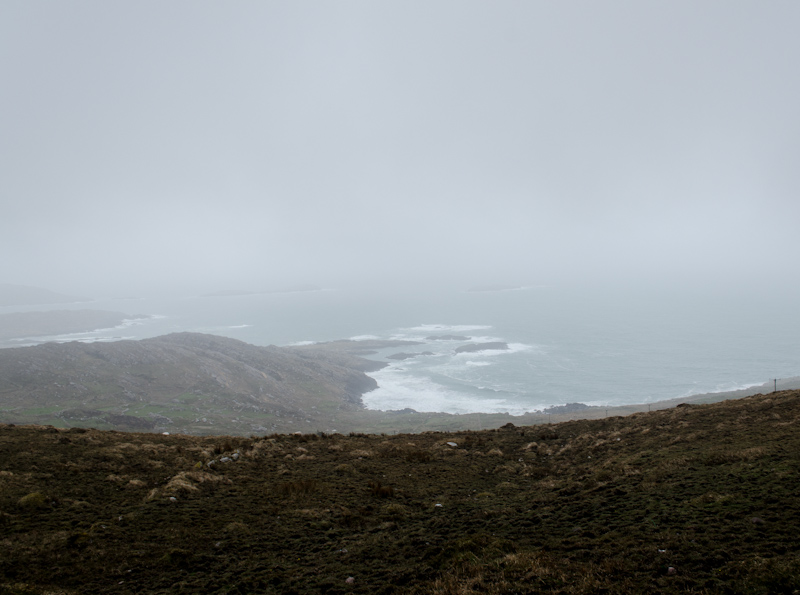 We continued along the Ring of Kerry in the rain and wind for many more miles and finally came to something we knew we would enjoy, more ring forts! Towards the end of the drive, or beginning if you go counter-clockwise, are two more ring forts, Cahergal and Leacanabuaile. These two forts sit side by side in the middle of sheep pasture and would have been a pleasant walk if we did not have the strong wind and rain. We drudged through the bad weather and had fun trying to not get blown off the top of the ring fort walls. 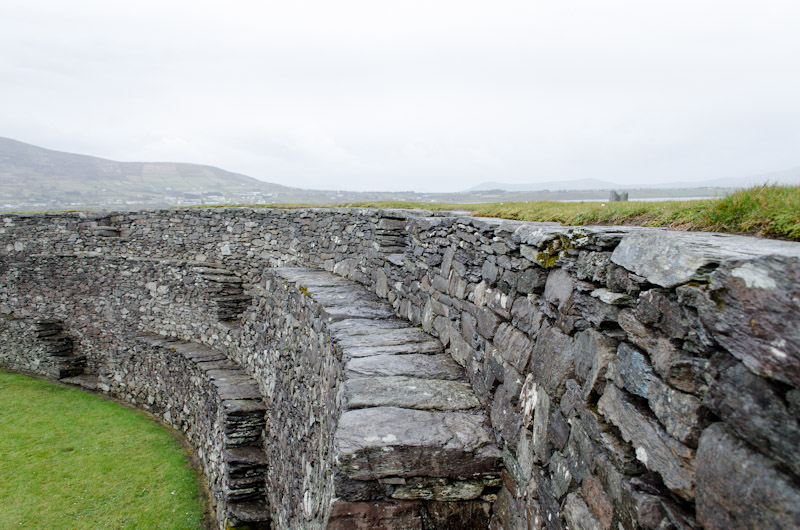 After visiting the last two ring forts we decided to go check out a castle ruin that looked like something out of a Dracula movie. Not seeing any signs saying to keep out, we climbed under a barbwire fence and made our way across a field to check it out. Once at the castle we went inside and found it to be full of cows. Yes, COWS! We now refer to it as “Cow Castle.” Its actual name is Ballycarbery Castle and was built in the 16th century. It would have been a lot of fun to explore more if the weather had not been so awful and the castle ruin had not been full of cows. 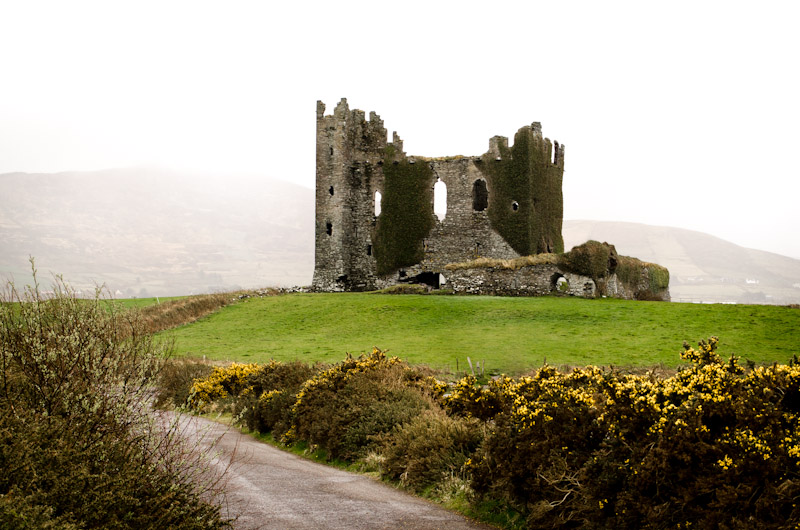 The last city on the Ring of Kerry was Killarney, which would be the first city if you go in a counter-clockwise direction. Killarney is a super touristy town with horse drawn carriages and tour buses everywhere! It also has some great attractions including Ross Castle, Torc Waterfall, Muckross House, and several others. Since the weather was so bad and it was late in the day we headed straight home, but came back to Killarney two more times to visit the attractions there. 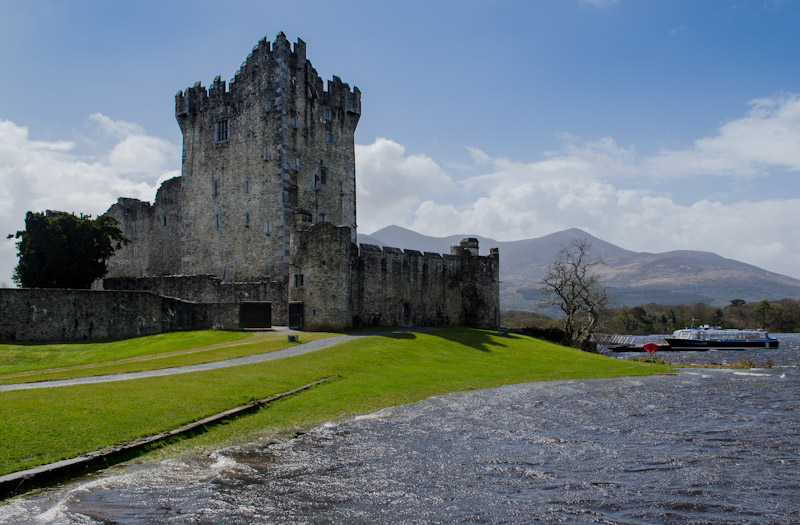 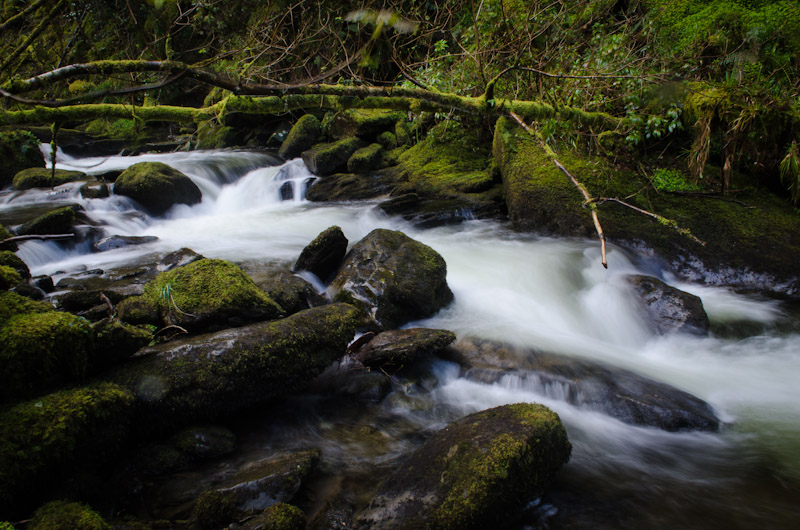 Personally, I thought the Ring of Kerry is very overhyped. It is a lot of driving on narrow roads with scenery that looks like everywhere else in western Ireland. Unfortunately, being the driver meant I had to keep my eyes on the road and probably missed a lot of the views and stuff that makes it so famous. We thought the best parts of the loop were the ring forts and the attractions in Killarney. If you are limited on time, heading to the two ring forts closest to Killarney and then spending the rest of your time in Killarney is the best bet and you won’t be missing much by not doing the rest of the loop.