When people think of England, most will think of fish and chips, Big Ben, and bad weather.  However, we have discovered something much more exciting: the canals and the narrowboats of England.  What a pleasant discovery it was for us as many a delightful hour was spent walking along the canals. 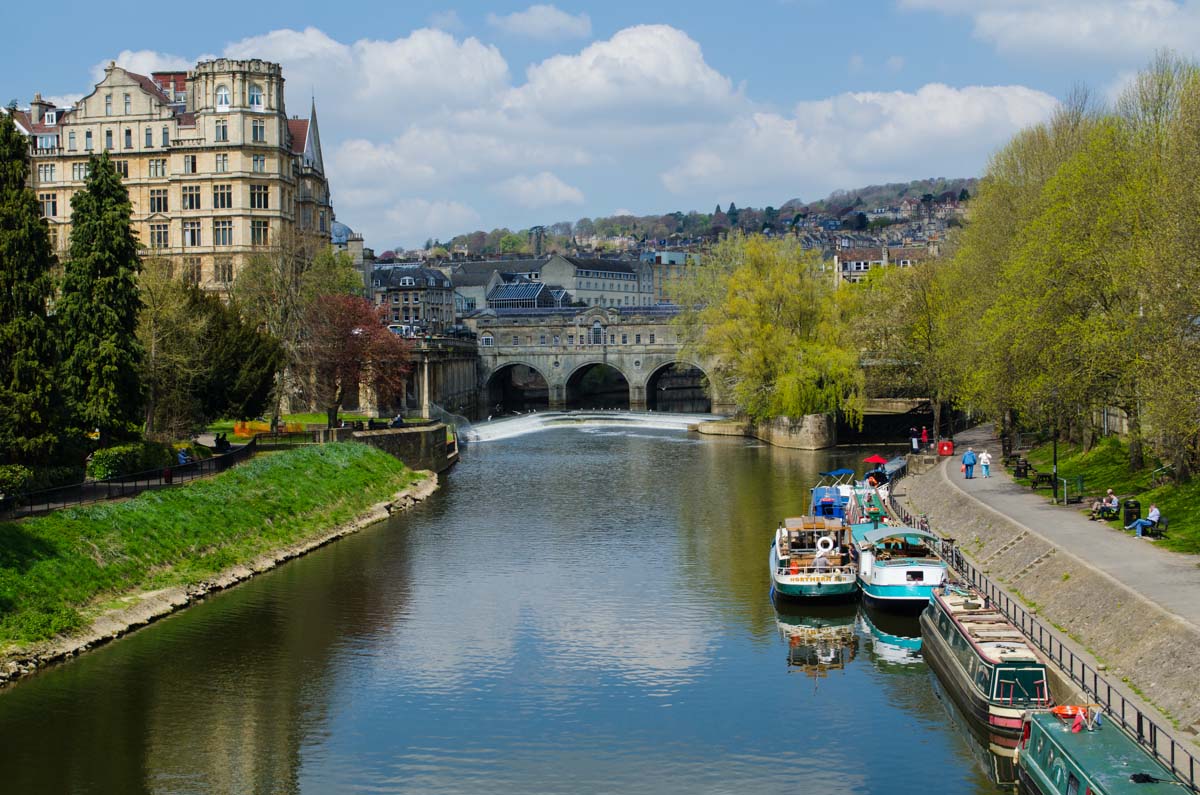 The city of Bath along the Avon River 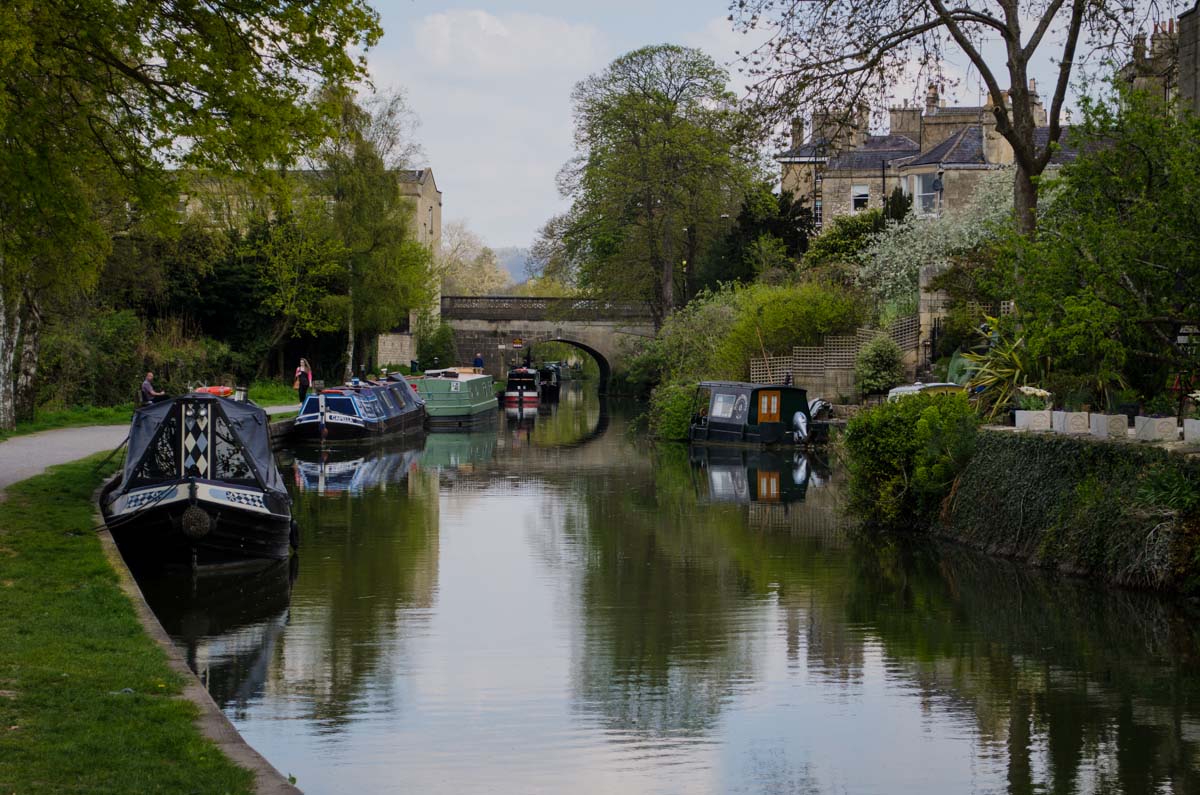 During our visit to Bath, we spent most days walking along the canal enjoying the view and the diversity of nature, which was always a nice change from the noisy streets of Bath.  Along our walks, we could hear the birds chirping and enjoyed watching the narrowboats lazily make their way along the canal.  We never knew what we would see on our walks, as the owners were as diverse as the narrowboats.  Along one of our walks we saw a boat full of jovial people dressed up as pirates and slightly intoxicated.  It was funny watching them take off as they bounced along the canal walls.  However, several of the owners of the other narrowboats in the path of the pirates were not laughing like us.  They instead closely monitored the progress of the “drunken pirates” with scowls on their faces, making sure that the pirates did not ram into their floating homes.  Another day we witnessed a person playing the accordion on the roof of a converted lifeboat, as the captain guided the boat down the canal. 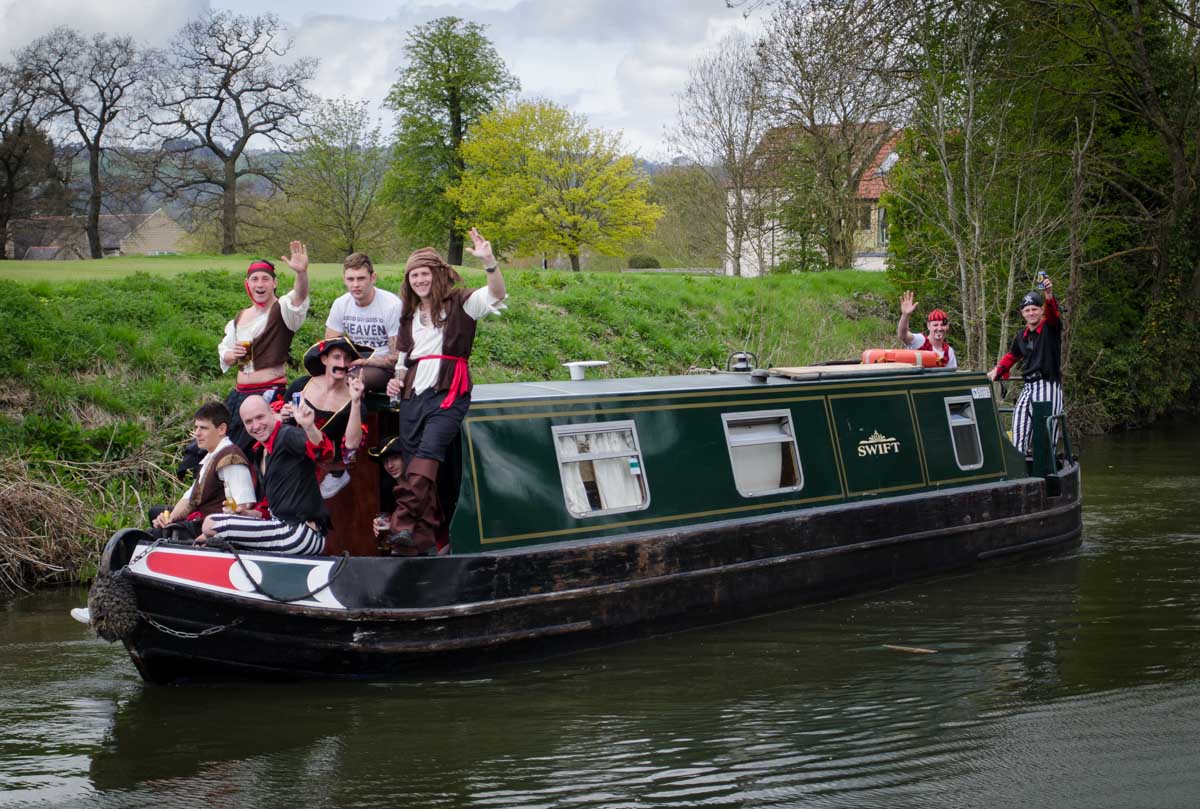 Pirates along the canal

During another walk, we noticed a person single handling a boat through a lock and we offered to help.  The person readily agreed and we were rewarded with a boat ride down the canal and a “cuppa” (cup of tea).  We had fun opening up the locks, but after several locks we realized how much work it can be.  We also realized how slow travel is on a narrowboat. 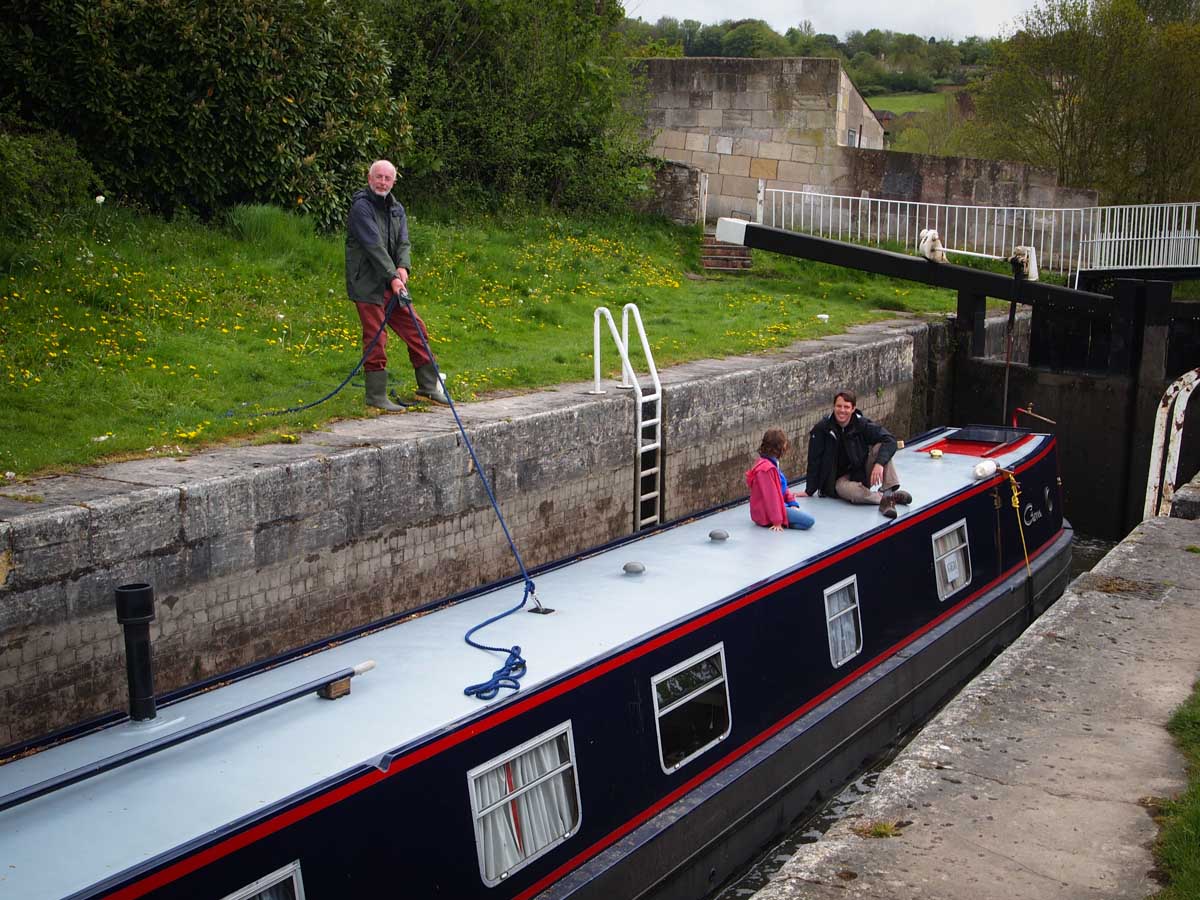 Nick and his boat “Gem”

I especially enjoyed studying the different narrowboats, because they look like such a nice, snug home with an amazing ever-changing view.  Many of narrowboats along the canals have beautifully painted murals on their doors and intricately woven rope bumpers.  Many also have flowerpots, bikes, grills, firewood, and other such things piled on their roofs.  Cats and dogs can often be seen napping on the roofs of the boats. 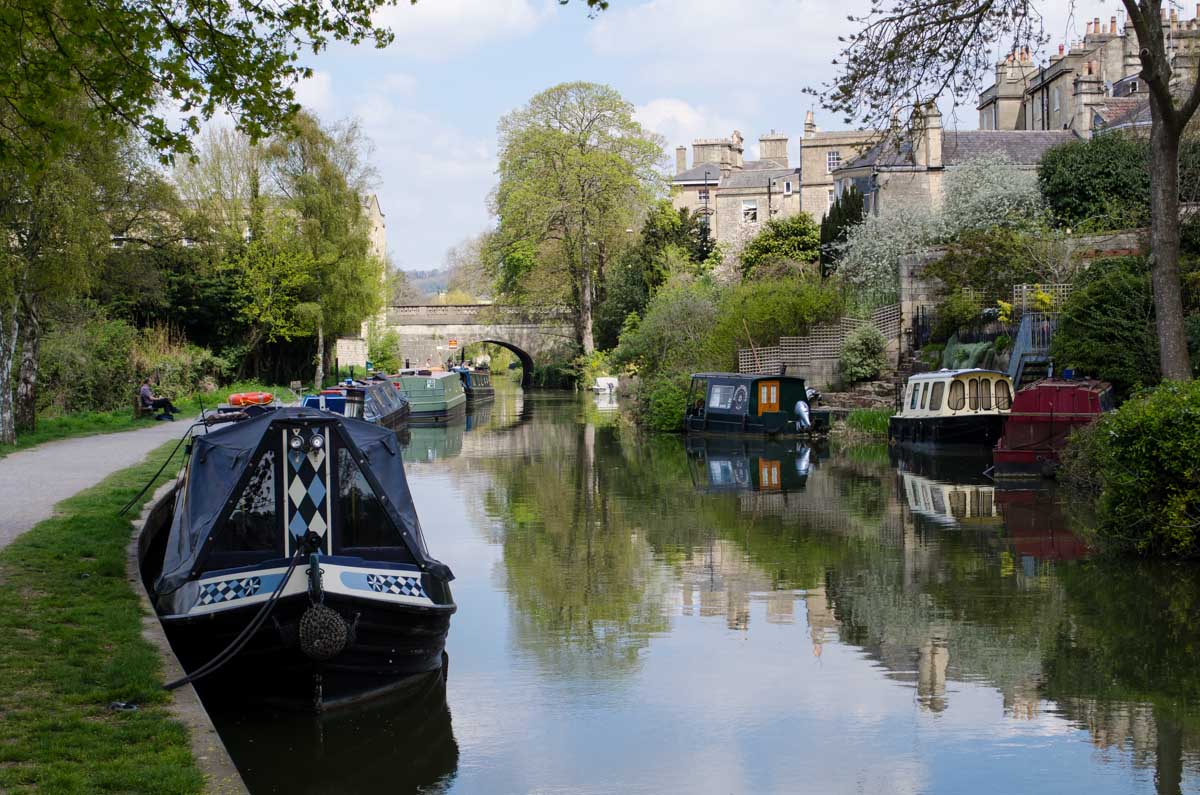 Besides walking, lots of people ride their bikes along the towpath.  The towpaths are ideal for a leisurely ride, because it is so flat.  Riding bikes looked like so much fun to us that we decided to rent bikes and ride along the canal too.  Overall it was a beautiful ride along the canal.  However, our bikes had seen better days and were not the most comfortable ride.  I also let my impatience get the better of me, as I knew almost immediately that I chose a bike much too small for me.  However, I thought that since the towpath was relatively flat that it shouldn’t be an issue.  Boy was I wrong, as my knees were really sore the next day.  Our goal was to make it to the town of Bradford upon Avon, but we ran out of time.  We did see an aqueduct canal bridge and a heron swooping down to scoop a fish out the canal. 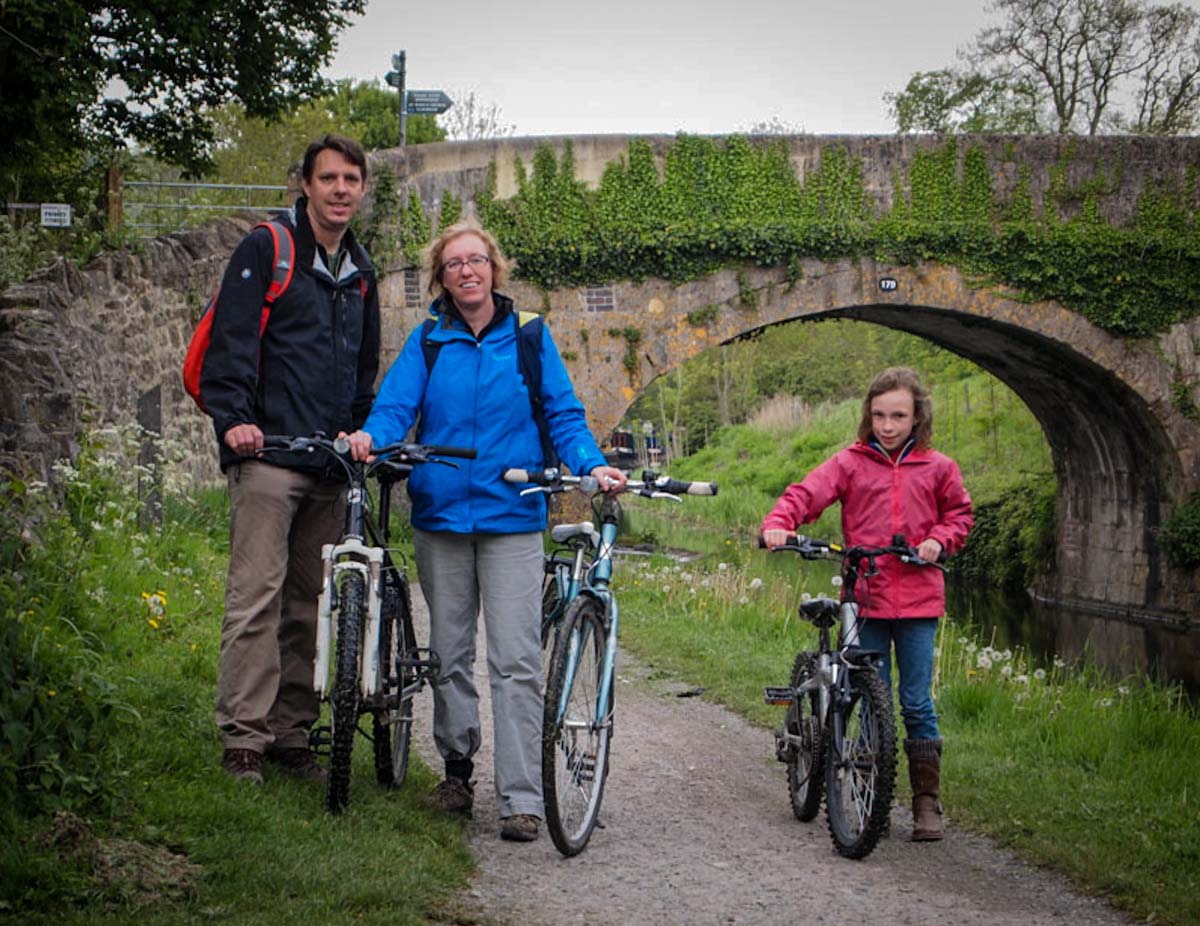 Riding bikes along the Canal 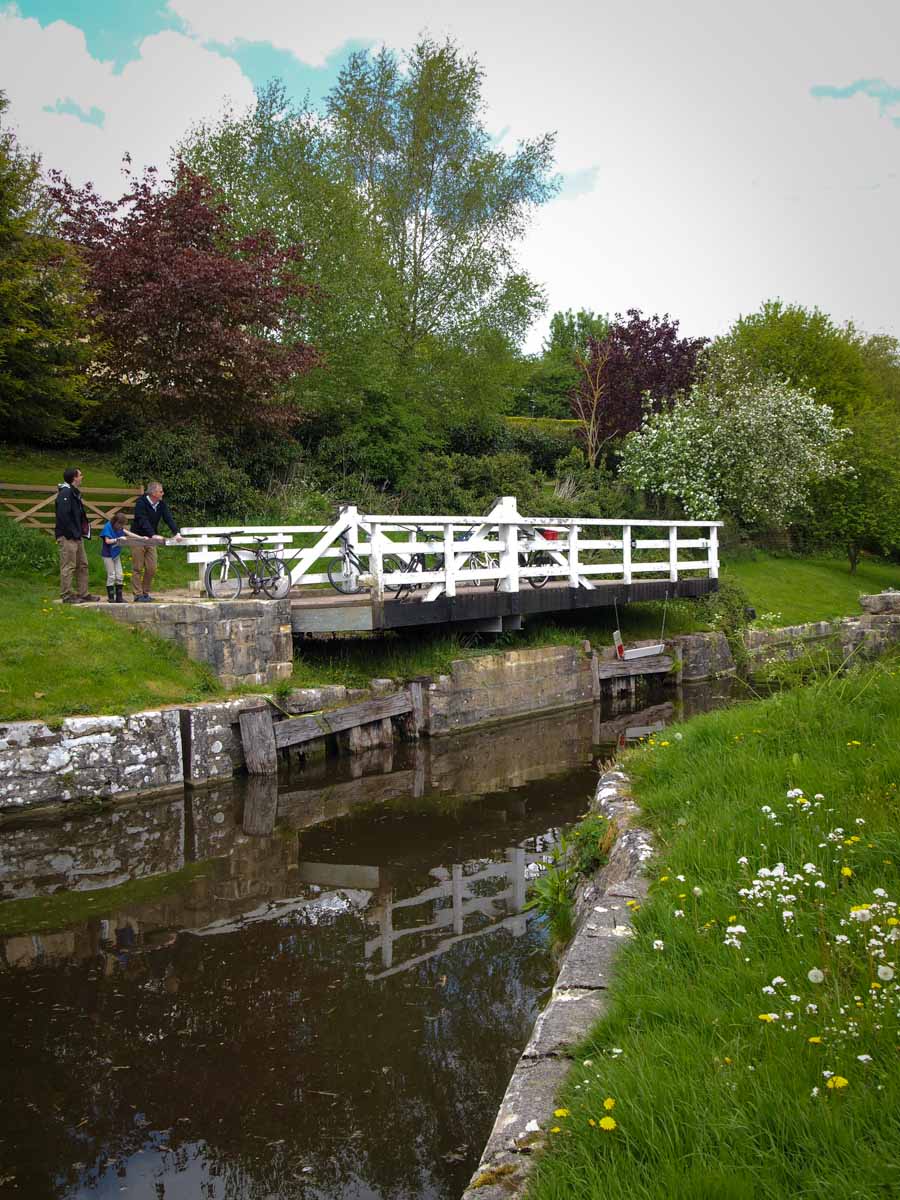 Helping out with one of the swing-bridges along the canal

We all agree that our favorite thing about Bath was the canal that runs through the town.  We had a marvelous time walking and biking along the towpath.  But the highlight of our stay is the day we helped the person who was single handling it through the locks.  We had the opportunity to meet a very nice person and to learn about the English canal lifestyle.  This is one of the things I love about travel, meeting so many genuinely nice and interesting people and being able to do some amazing things.  Thanks Nick from “Gem.”  It was great meeting you!