You’ve seen London Tower, Big Ben, Westminster Cathedral, and you can’t handle another minute inside any of London’s amazing museums. So what’s there to do in London that could be good entertainment for the whole family? We were in this exact situation on our last visit to London and we found the perfect solution. We went and saw a show!

We were pleasantly surprised to see how many options there were for live theatre in London. From off-Broadway musicals, plays, and even locally produced shows, London has a lot to offer. In fact, there were shows playing that I thought I would never be able to see without traveling to New York City. 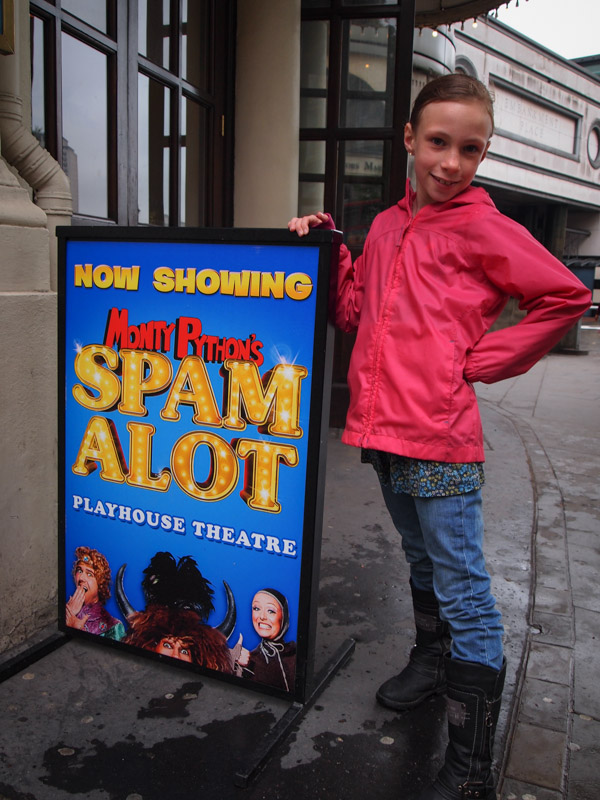 In trying to decide on which show to see that would offer good entertainment for adults, as well as an 8-year old child, we decided on Monty Python’s Spamalot at the Playhouse Theatre. The Book of Mormon was also playing, but was probably not the best choice to bring a child to.

Having grown up watching Monty Python’s television shows and movies, the chance to see Spamalot was too good to be true. I had heard great things about that show and couldn’t miss a chance seeing it in person.

We had been told that the cheapest tickets were found at the street kiosks around Central London. But after getting price quotes for the different seating options, we actually found better pricing online. We found several websites that offer a “Best Available Seat” option that would give us the best available seats, just as the name suggests. The price was actually cheaper than a guaranteed nosebleed seat with an okay view, but was a gamble as we may end up way at the top or off to the side with an obstruction blocking our view. But as luck would have it, our gamble paid off and we ended up on the second row of the dress circle with an excellent view of the stage.

Seeing the show was all we had hoped it would be and our daughter also found it hilarious. If we had had more time in London we would have gone to see another show.

If you are planning to visit London I highly recommend catching a show. If you find a good hotel in Central London you can easily catch dinner and a show within easy walking distance and have the time of your life!

Most theatres are located in London’s West End which also offers a great assortment of restaurants and some amazing shopping. After we saw Spamalot we had a lot of fun wandering around the West End checking out the different shops and restaurants.

If shopping isn’t your thing, the West End is within easy walking distance of the Thames River where you can enjoy a nice stroll along the picturesque river before or after the show.

Now that we have experienced live theatre in London, we will be sure to catch another show the next time we are there.