A popular tourist destination in Lviv, Ukraine is High Castle, also known as Castle Hill. It sounds like it would be an exciting place with a castle, but there is no castle! A castle was actually built there in the 13th century, but in the 19th century it was dismantled and an artificial mound was constructed to commemorate the 300th anniversary of the Union of Lublin, whatever that is. But let me digress, this story is not about the hill, the once-upon-a-time castle, nor the Union of Lublin. This story is about how I got the bird on the way to the top of High Castle. No, not that kind of bird…

We awoke to a nice, sunny day in Lviv. We admit that we have a weakness; we can’t travel anywhere without climbing something. So knowing that there was something to climb we grabbed our cameras and decided to head up to the famous tourist trap of High Castle and see what the fuss was all about. We followed our trusty free tourist map and had a nice leisurely stroll uphill and away from the hustle and bustle of the city center. We soon came to a set of stairs heading up a forested hill with a tour group fresh off the bus talking about something touristy. We quickly passed them and started up the first section of stairs. It’s always important to be in front of the tour groups as they have a tendency to stop at random places and talk about “interesting things” creating an impassable wall. In the lead we made our way up the hill and towards our goal of the summit.

Wherever there are tourists, there are tourist traps. Unfortunately, I fell right into the middle of one and could not escape! As we worked our way up to the summit we came to where two paths join. There was a small pickup truck parked on the side of the pedestrian path that sold overpriced beverages, which is typical. As I was wondering how they got the pickup up there, we came upon something we were not expecting. Just past the pickup and at the beginning of the pathway leading up to the summit we saw a giant eagle. As I was trying to point it out to my daughter I got Shanghaied. You see, this wasn’t a wild eagle, it was a gimmick! A guy that had been standing near the eagle motioned me to come forward to look at the eagle more closely. I didn’t understand anything he was saying and I asked if he spoke English. In response I had the giant eagle placed on my arm. Seeing the razor sharp beak just inches from my eyes I lowered my sunglasses imagining the hungry eagle plucking out my eyes. Carrion eaters love eyes! In response, the eagle grabbed my sunglasses and scraped my temple with its razor sharp beak. Yes, it wanted to eat my eyes! One of the eagle handlers carefully wrestled my sunglasses away from the eagle and placed them back on my face. Thinking this was neat and all, I asked if they could remove the bird. In response, I had a second eagle placed on my other arm. I was stuck! The talons gripped my arms tightly and the owners had no intention of getting them off just yet. They motioned for Kerri to take a photo and she took out her camera and snapped a couple of photos. They then took one of the birds and placed it on my daughters arm. I asked them again if they could remove the eagle, and they kept motioning for Kerri to take a photo of Sydney with the bird. They startled the birds to get their 2-meter wingspans to unfold and wanted Kerri to take more photos. 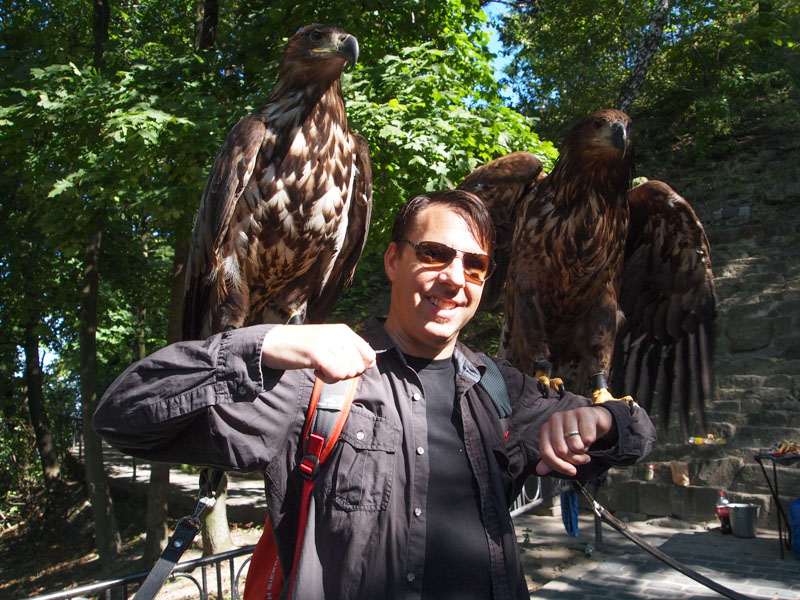 Eventually, they removed the birds and we were free, or so we thought! Even though I didn’t ask to have giant eagles placed on me I figured they would want a tip. I opened my wallet and gave them everything I had. Since we were only in Lviv for 5 nights we had been trying to make sure we did not have any leftover Ukrainian money when we left the country. Unfortunately for the eagle handlers, I only had 6 Hryvnias on me, which is less than 1 US dollar.  I offered the eagle handler all my money, but he shook his head and punched into his cellphone the amount of 240 UAH, which is $30 USD. Shocked at this ludicrous amount and now knowing I was stuck in the middle of a tourist scam, I told him no way and started to walk off. He chased me down and screaming at me in Ukrainian, I returned the screaming with a few English expletives. And to further get my point across, I showed him my empty wallet and once again offered him the 6 UAH. Upon seeing my empty wallet he now understood that no matter what amount he demanded, he wasn’t going to get more than 6 UAH. He then turned to Kerri and shouted at her to delete the photos. In her haste she accidentally deleted all the photos and video she had taken the last couple of days.

We continued on to the top of High Castle and once reaching the summit we were rewarded with a view of the city. It wasn’t the nicest view we had ever seen and the events that had unfolded on the way up soured the moment. 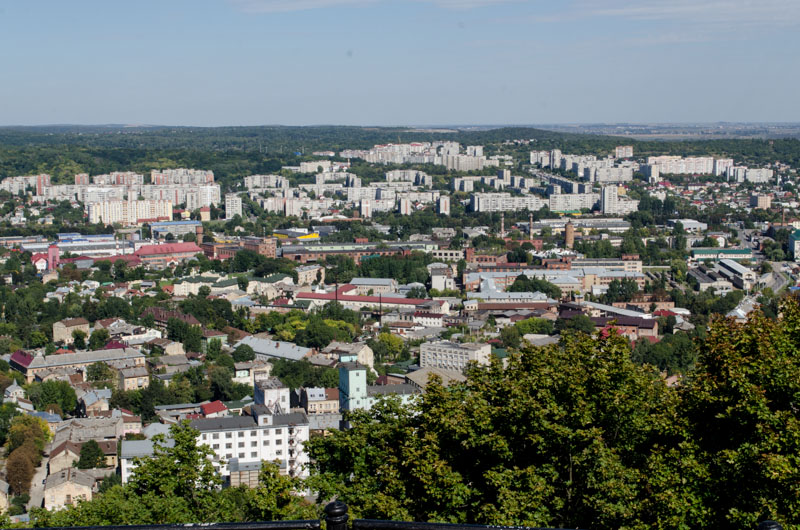 On the way back down we saw a group of girls that were forking over cash to the eagle handlers for the eagle experience. We wondered if they had paid the full 240 UAH, or if that amount was only for Americans that spoke no Ukrainian.

Back at our apartment I downloaded a free photo recovery program and saved the deleted photos from Kerri’s memory card. Unfortunately, I could not recover the video that she had taken the day before.

If you plan on visiting the Lviv High Castle, beware of the eagle people! And if you do want to experience the death grip of eagle talons on your arm, be sure to negotiate the amount first!