Construction on Angkor Wat first began in the 12th Century AD and became the largest preindustrial city in the world measuring at least 1,000 square kilometers. Today, Angkor Wat is much more than just a bunch of old buildings. An entire community of people still live within the protected area. There are houses, schools, restaurants, and shops. Angkor Wat is a UNESCO World Heritage Site and is Cambodia’s largest attraction drawing in over a half million tourists per year.

Angkor Wat has been on my bucket list for many years now. It was great to finally get the chance to spend some time there and see this amazing place with my own eyes (and camera.) Below are selected photos from our recent visit there.

With postcard photos all over Siem Reap showing a beautiful and colorful sky over ancient temples at sunrise, I knew we had to go. Equipped with tripod and plenty of camera gear we set out in the darkness at 5am  to watch the ultimate sunrise. After arriving we found we were not the only ones thinking the same thing and the crowds were thick. Unfortunately, the sun never appeared. The sky went from black to different shades of grey. Just before packing up the tripod, I swung around and took a photo of the crowds of people still waiting for something to happen. I thought the colorful crowd was way more impressive than the sunrise. Crowds of people gathered for the sunrise at Angkor Wat

My absolute favorite subject to photograph at Angkor Wat was the children. Most of them live within the protected area. While not attending the local school (if they can afford to attend), they try their hardest to sell you postcards and other trinkets. Most of the kids selling postcards had the same spiel, “Wanna buy postcards? Ten postcards one dollar. 1, 2, 3, 4, 5, 6, 7, 8, 9, 10.” It then started all over, often with 3+ kids surrounding you all chanting the same thing in unison. You couldn’t help but laugh and start counting with them. Many of the other kids there were just like normal kids. They would play games, ride bikes, and just hang out. For us it was a tourist attraction. For them, it was their home and playground.

I apologize for some of the blurry photos. I was using my favorite lens for most of these, which is manual focus. None of these kids would sit still, and manual focus is not the best with wiggly children. 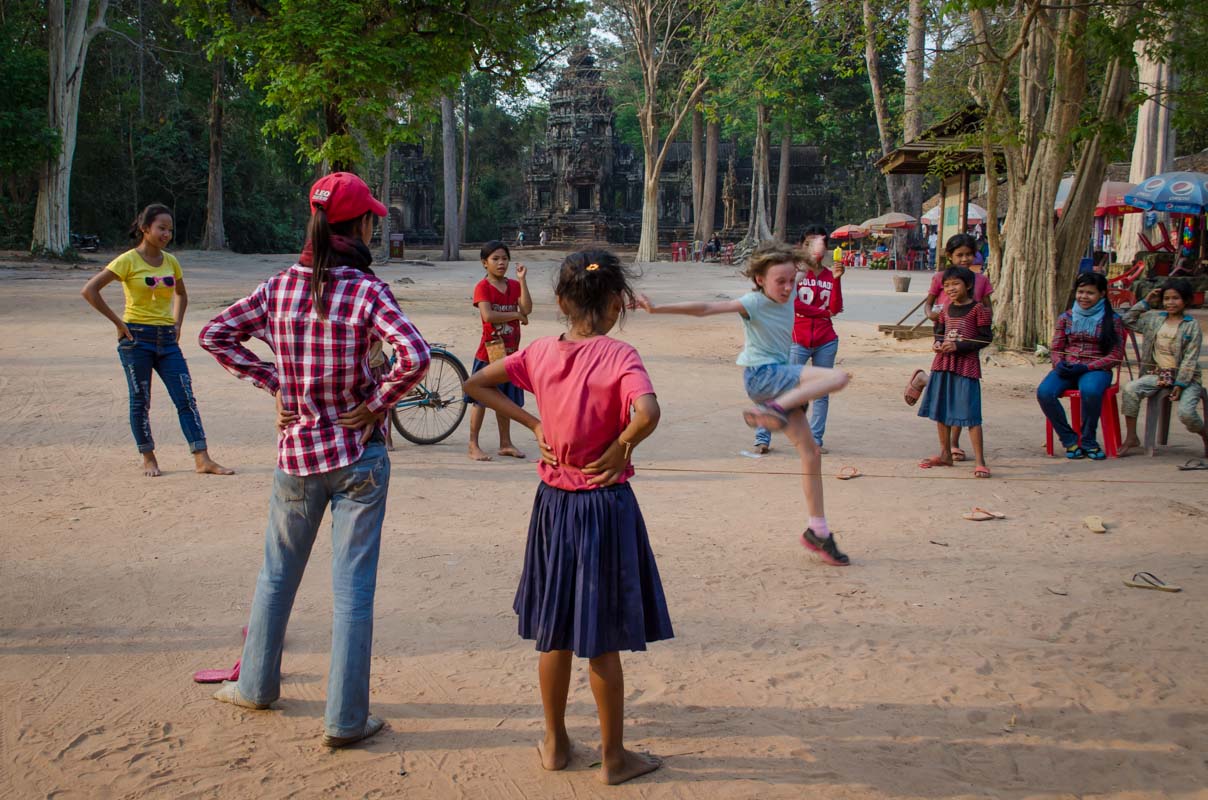 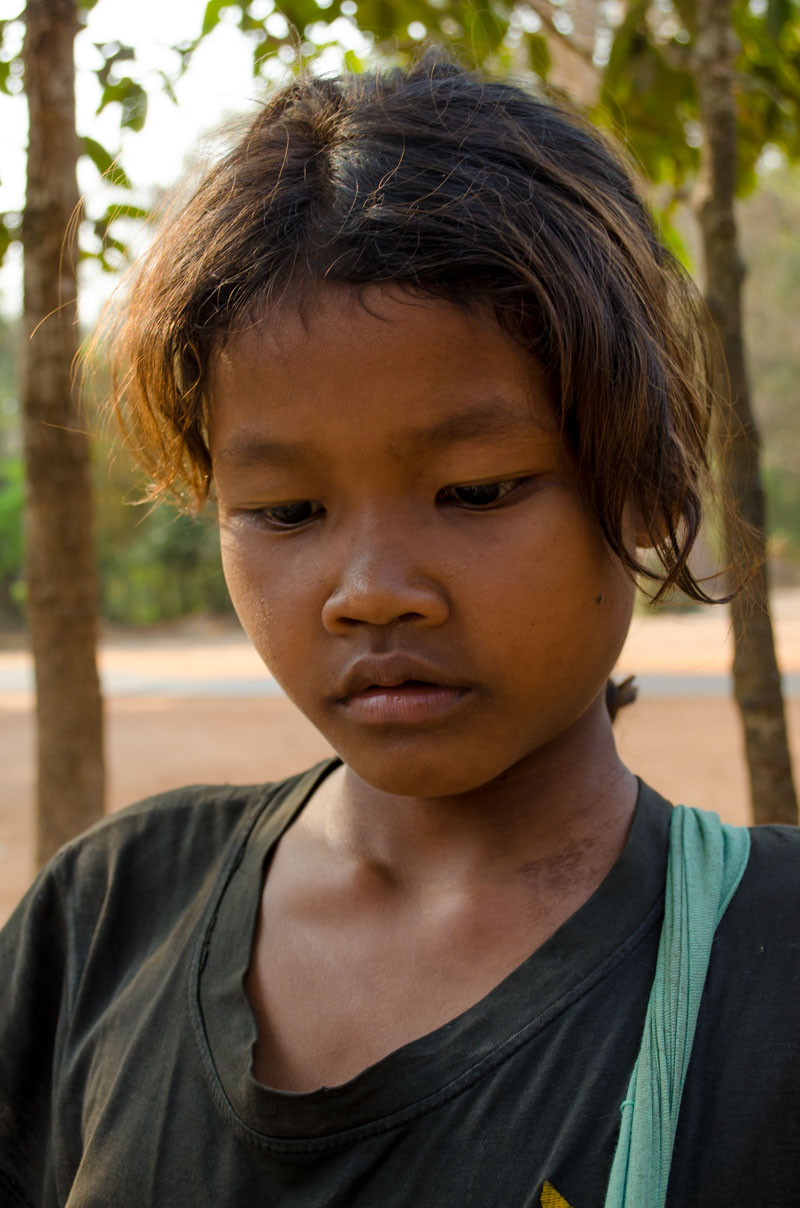 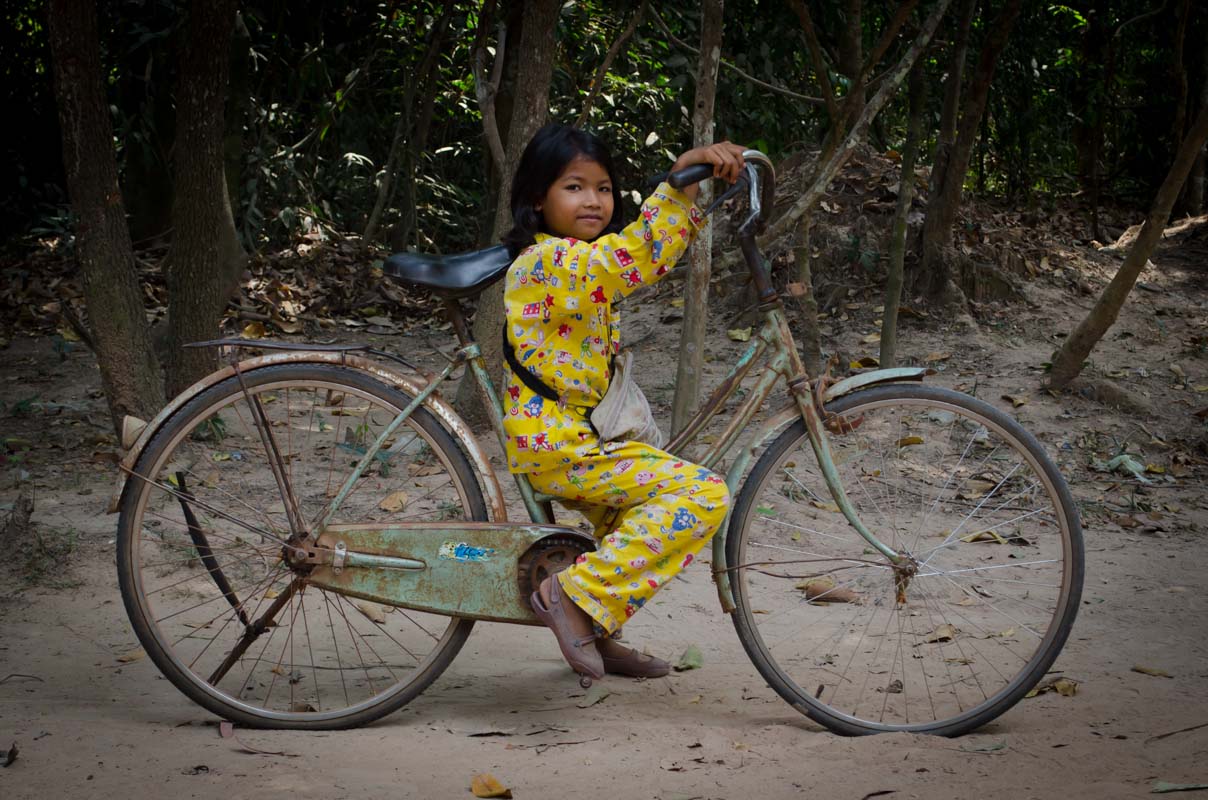 Girl in yellow pajamas on bicycle 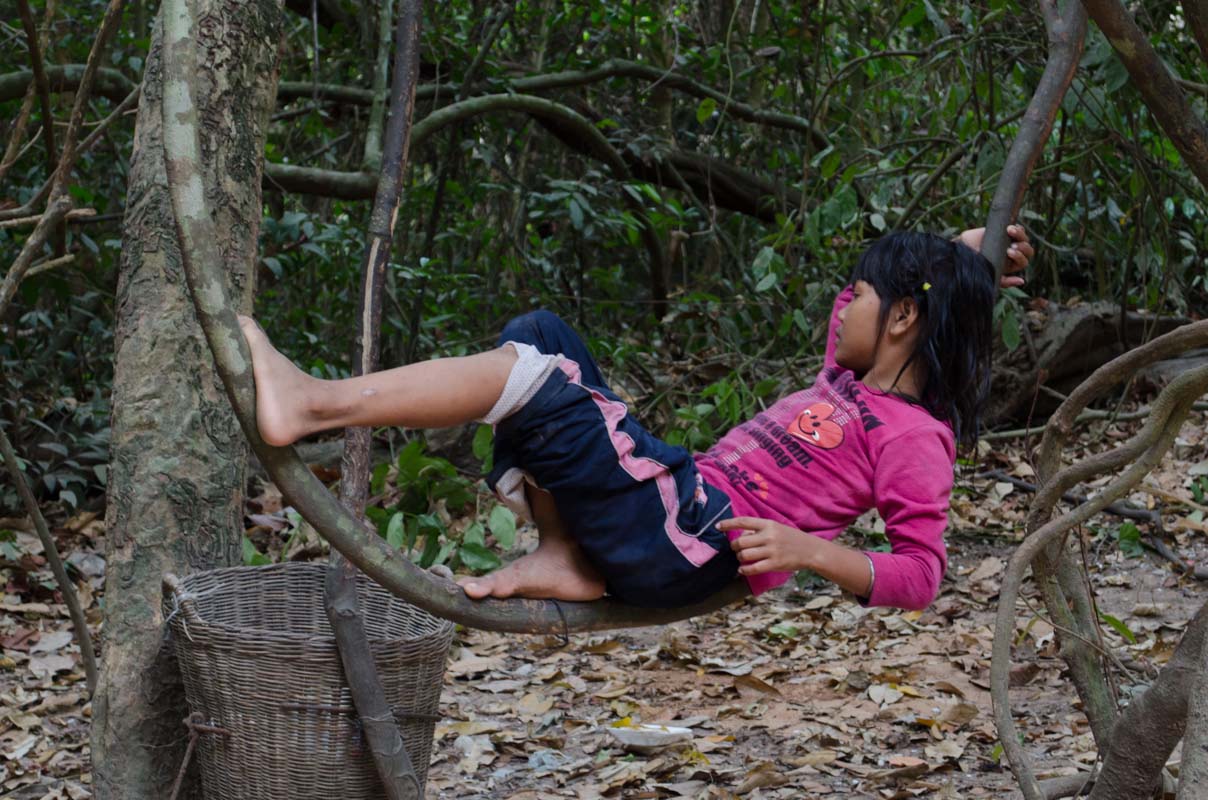 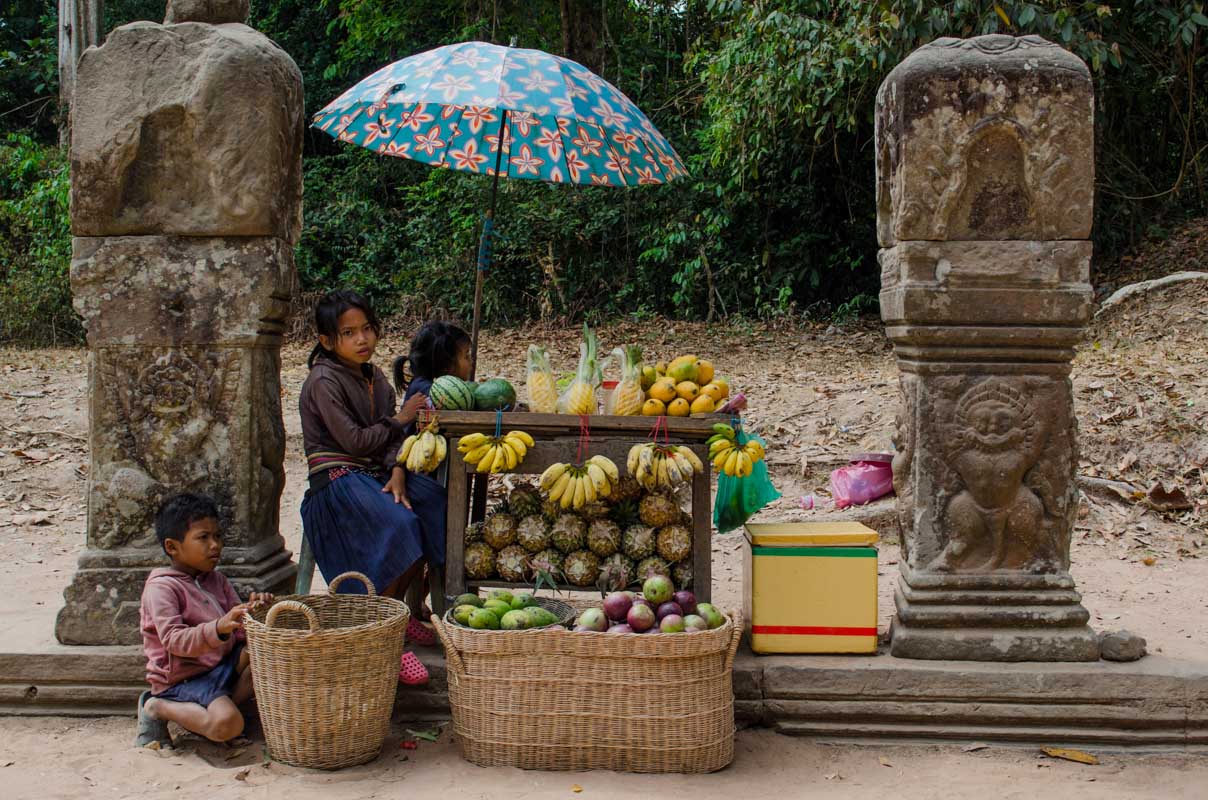 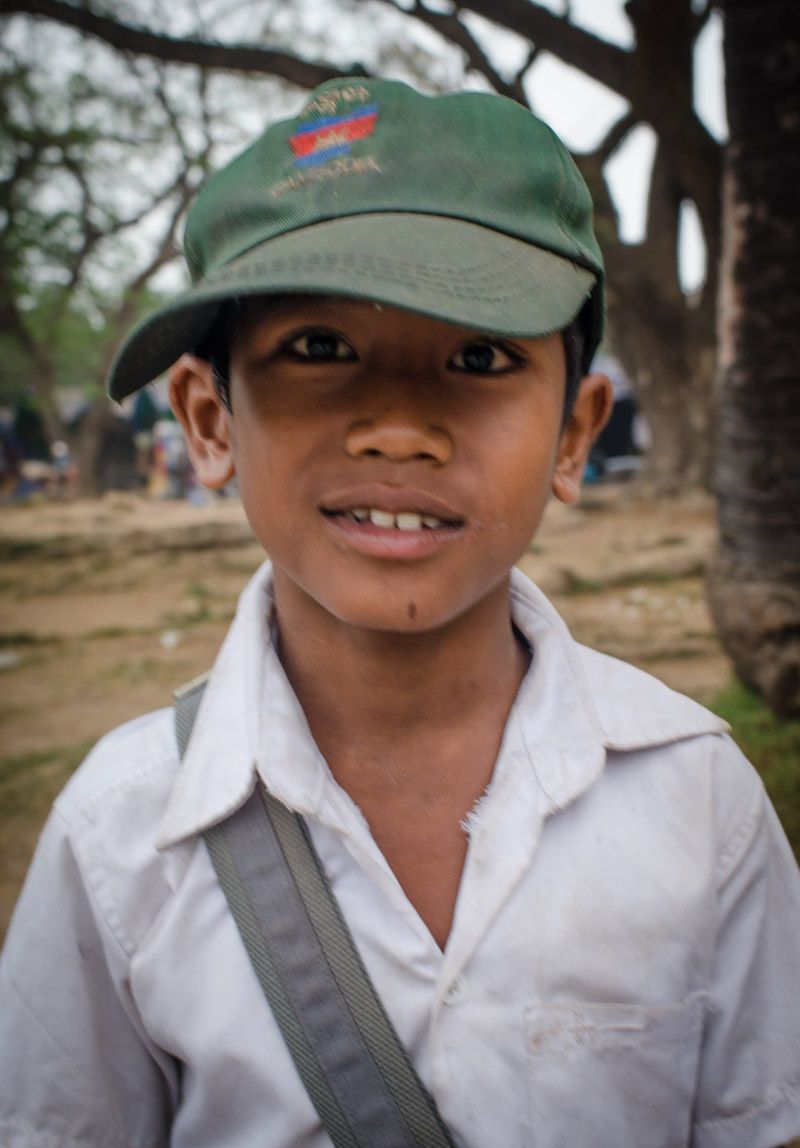 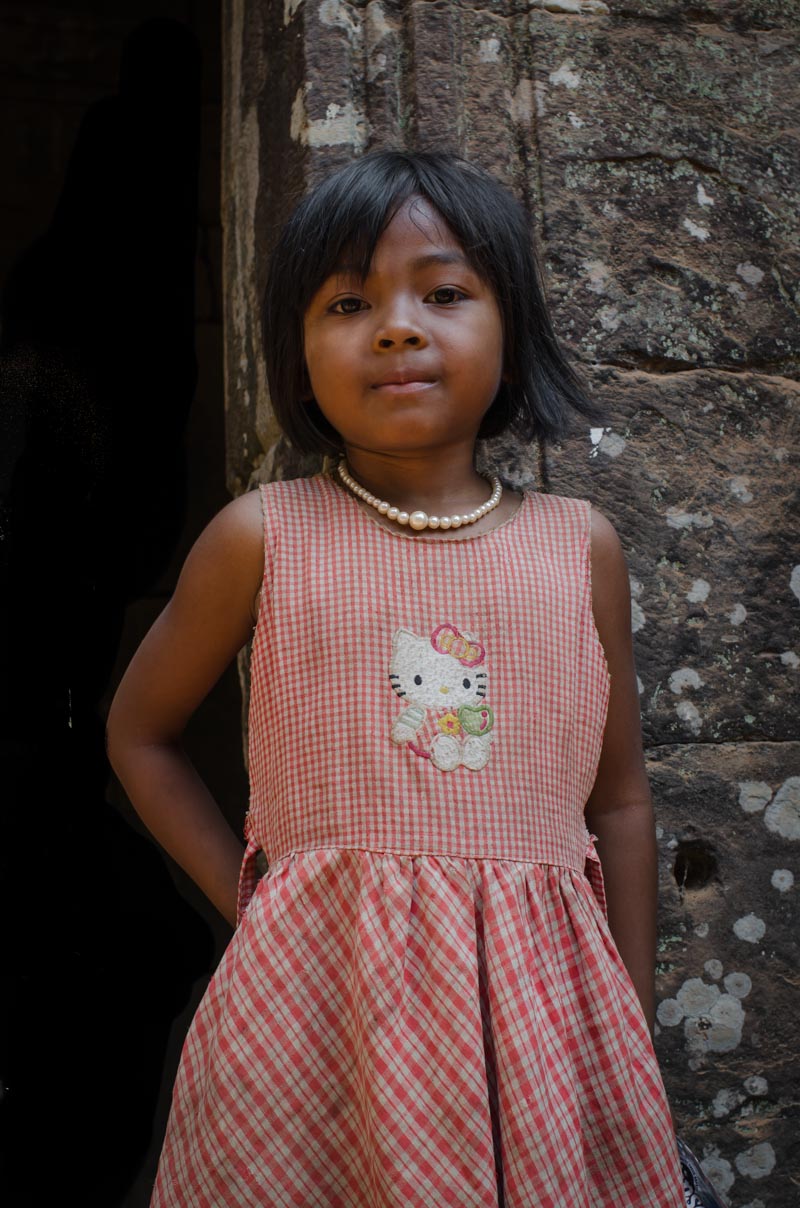 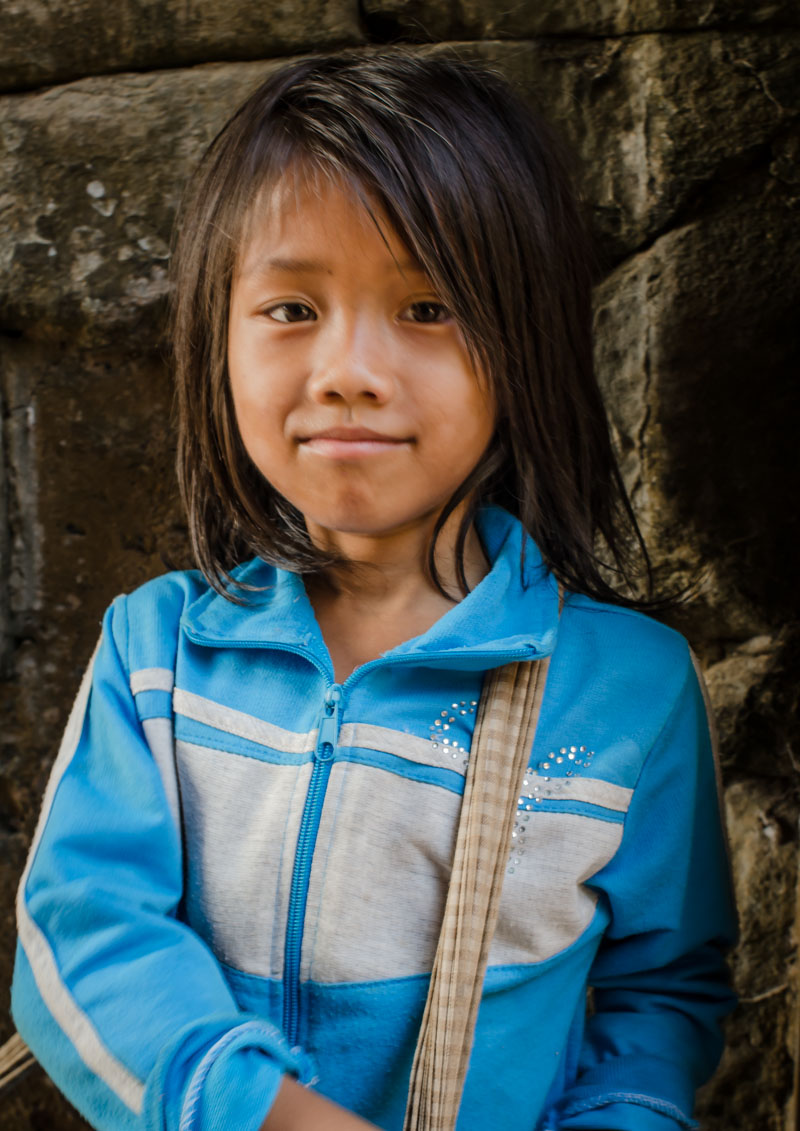 Another girl trying to sell me stuff 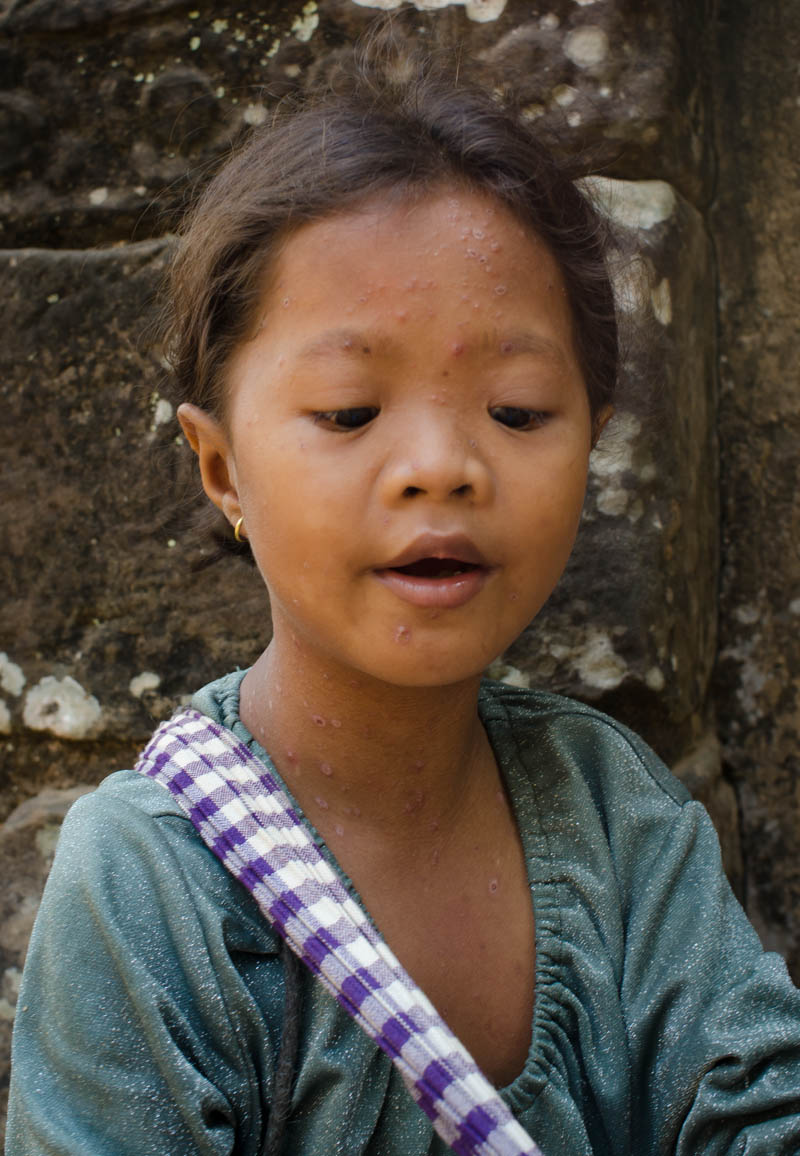 With the harsh tropical lighting I did not like most of the temples and structures in color and shot them mainly in black and white. But I can’t have a photo essay on Angkor Wat without some of the structures in color. So, here are some that don’t look too bad. Once again, if you haven’t already done so, check out my Black and White photos of Angkor Wat. Crowds at a temple 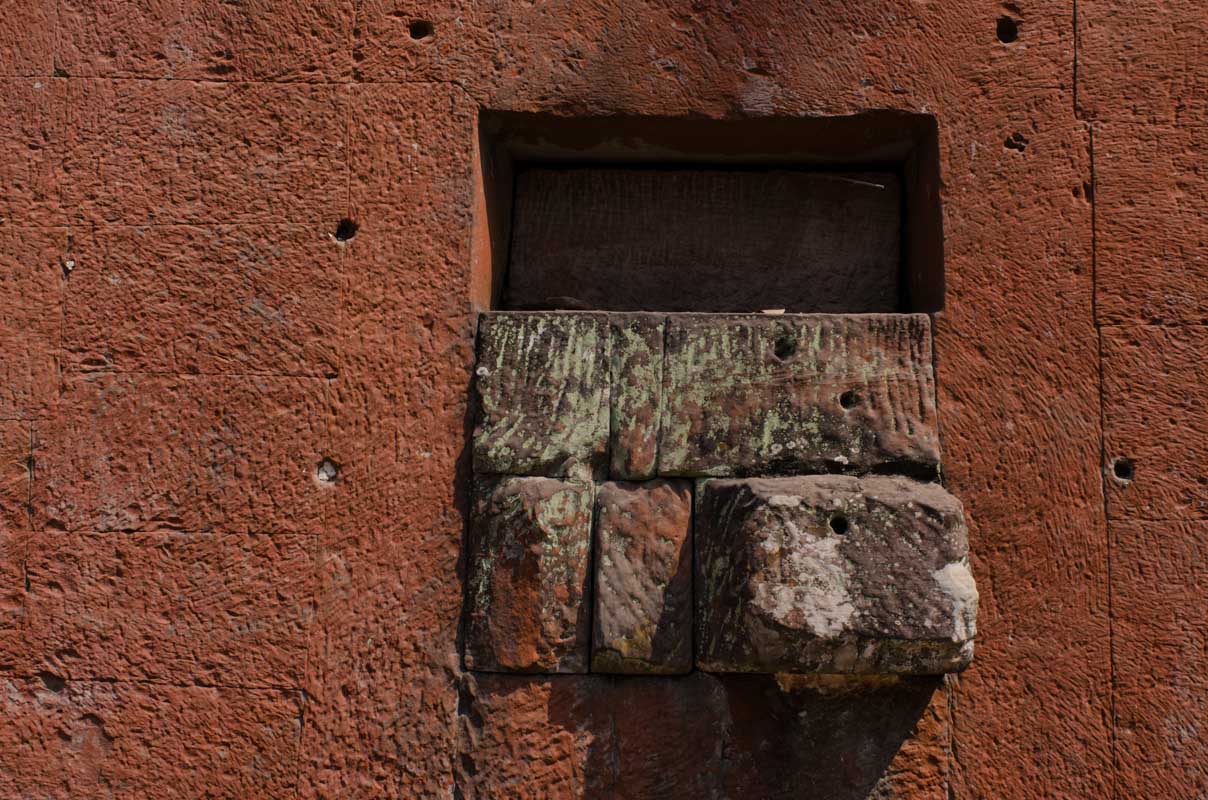 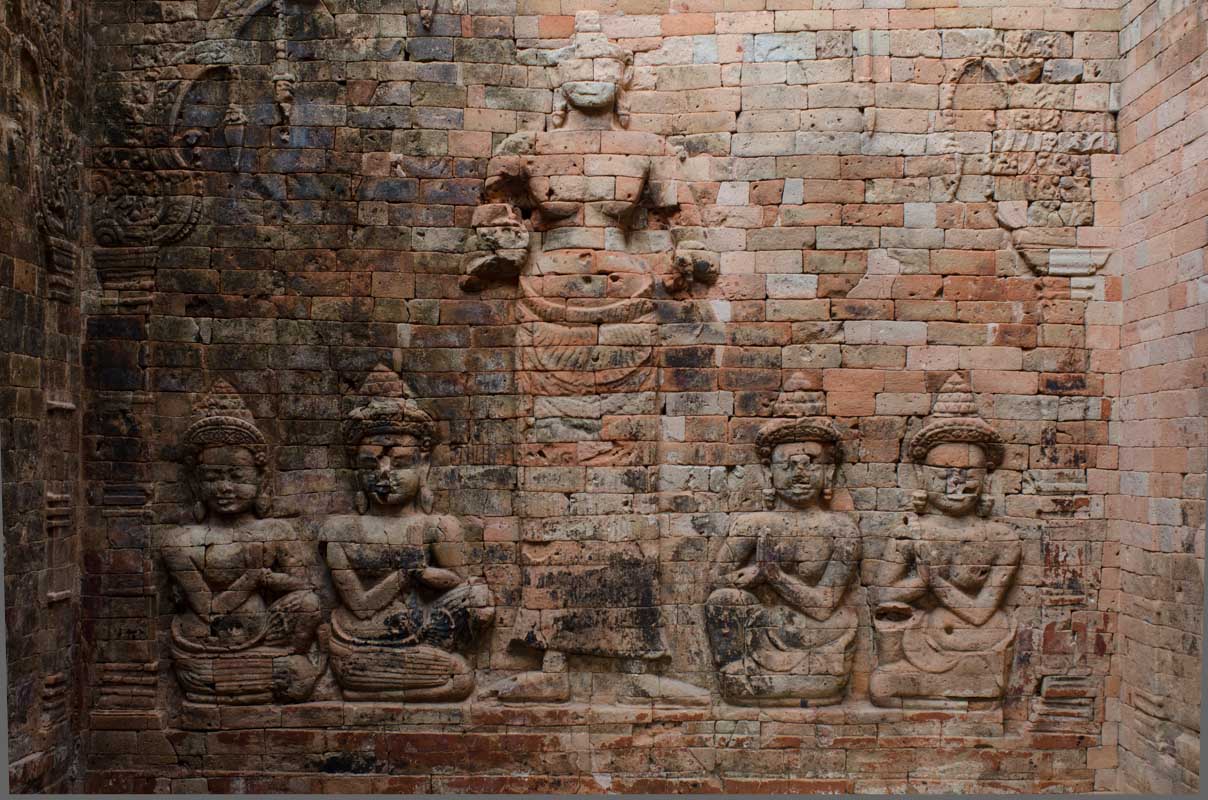 There are numerous long tailed macaque monkeys that live at Angkor Wat. These were the first ones we had seen and they were busy looking for breakfast in the tree. We spent a good hour watching them, but not wanting to go through rabies shots, we kept our distance. Over the next few days we saw monkeys eating garbage in the parking lots, stealing a can of Pringles from a shop, and even chasing a lady. Best to admire from a distance! 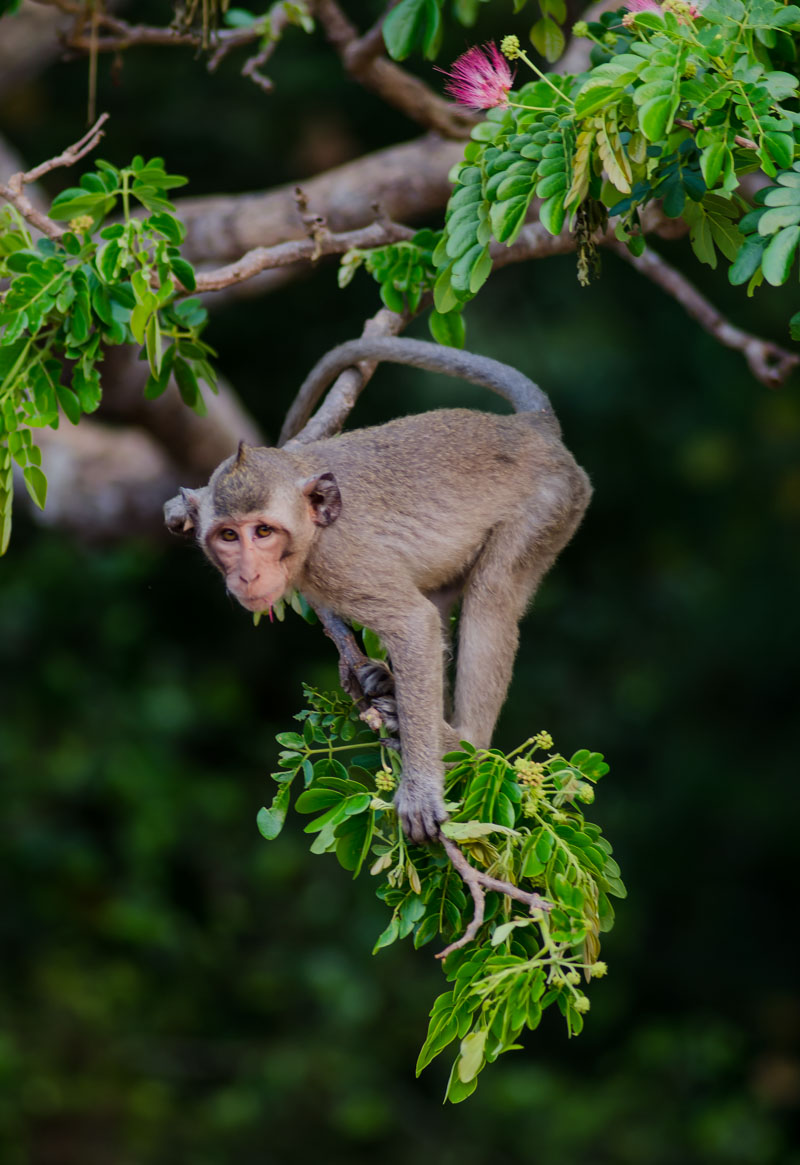 On the far end of the Angkor Wat complex is an area known as Kbal Spean. We had to pay $25 for our tuk tuk to take us the 35 kilometers out there, hike 6 kilometers (round trip) through the hot and humid jungle to get there, but what we found was completely worth it. The ancient people that lived at Angkor Wat centuries ago carved sacred symbols into the stream bed to bless the water that would help their crops grow downstream. Getting away from the crowds, the sound of falling water, and the 1000’s of butterflies everywhere made this a very special place for us. 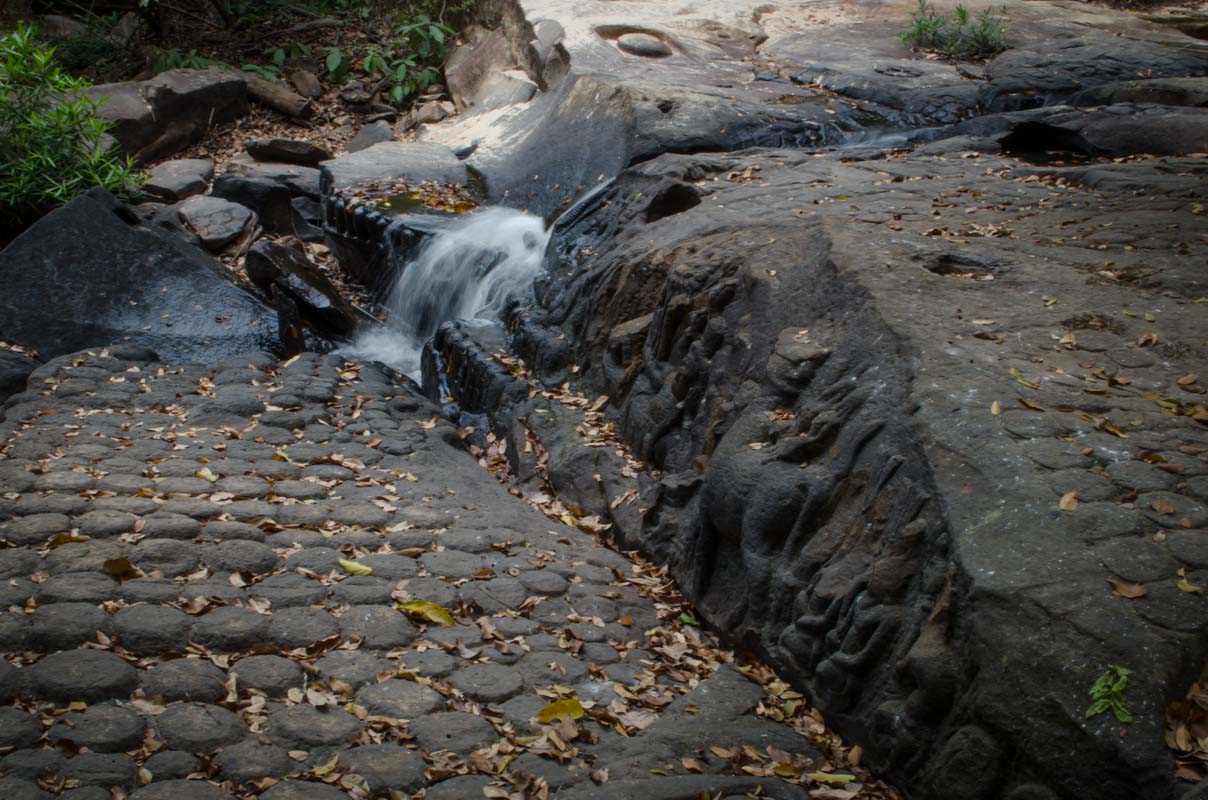 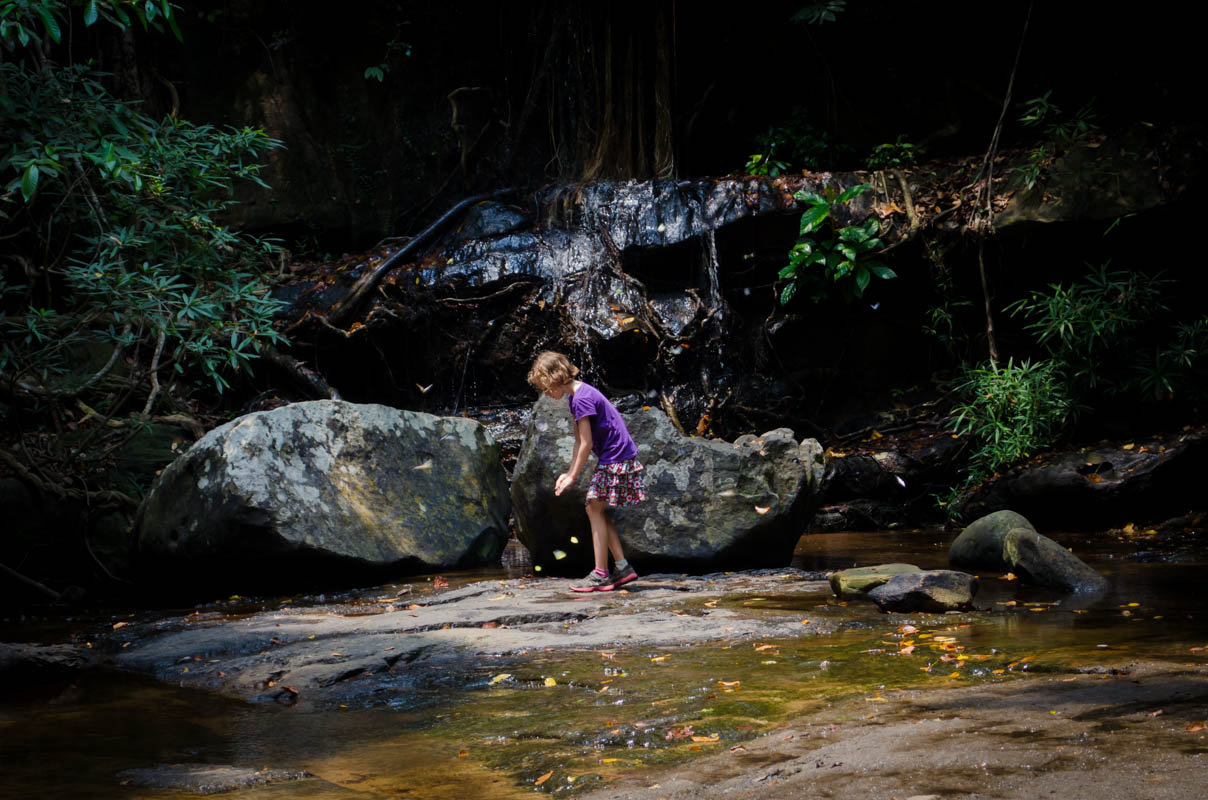 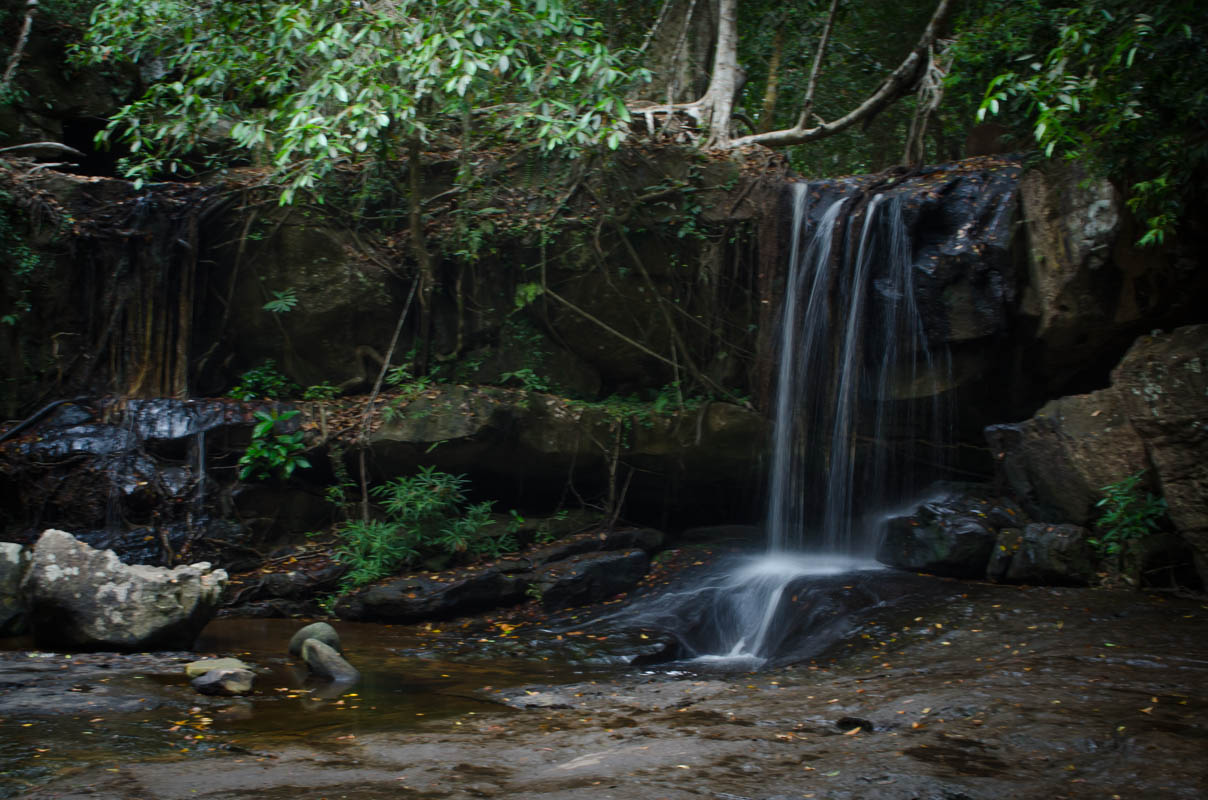 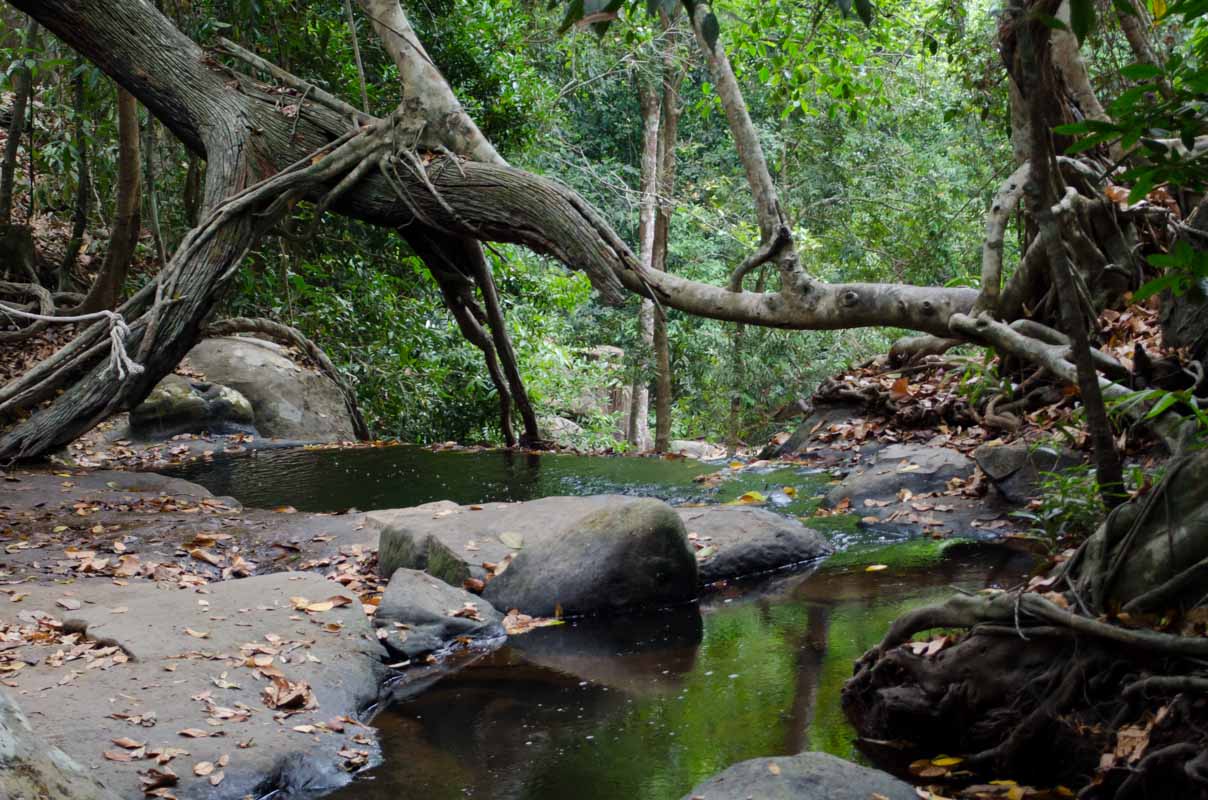 Top of waterfall at Kbal Spean

Having no luck at the sunrise, we tried for a sunset. Unfortunately, we came on a day where the sun disappeared behind clouds shortly after arriving. We waited and waited with 100’s of other people. Just before giving up, the sun popped out for a couple of minutes allowing me to get these two shots. 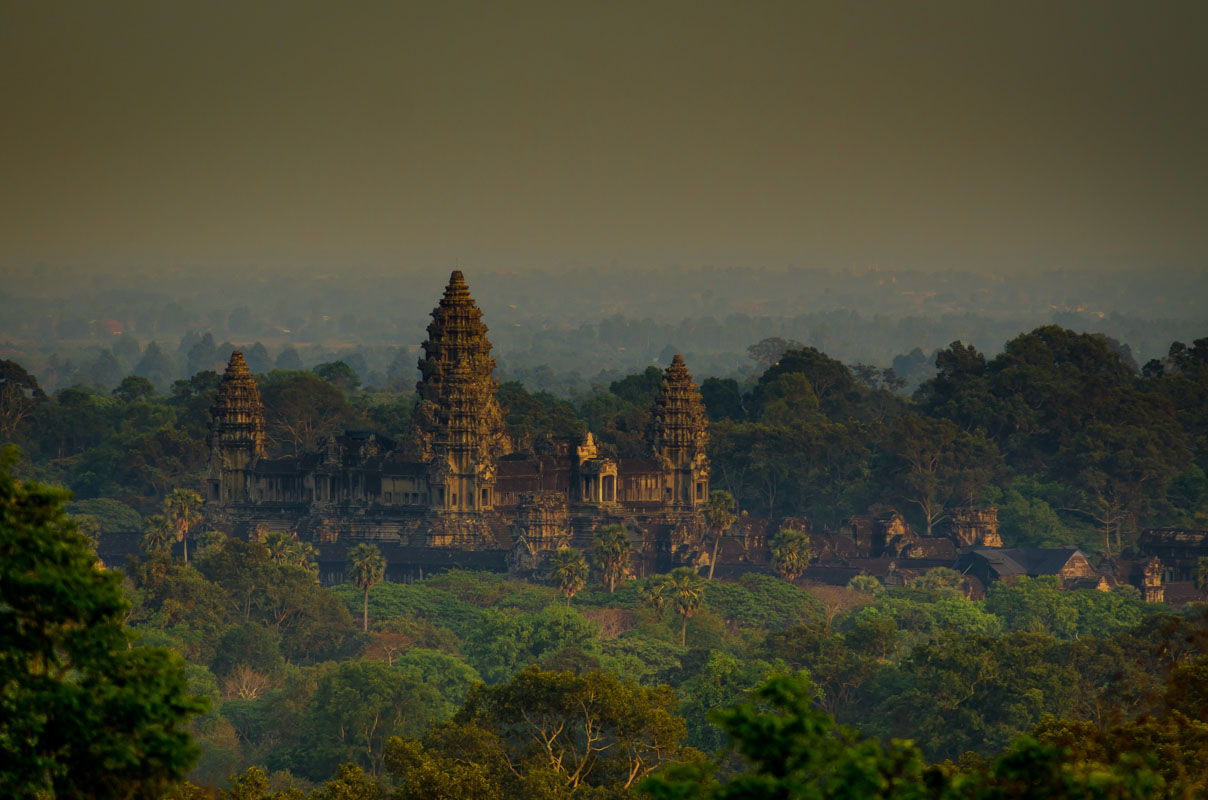