“Are you crazy? Why in the world should we visit Berlin?” Kerri voiced during our discussion on where to go in Germany.

“Because that’s where Checkpoint Charlie and the Berlin Wall is.” Came my reply.

We had been warned by one of Kerri’s friends who had spent time in Berlin that we wouldn’t like it there and we should visit other places in Germany, like Munich. Anyplace but Berlin! We only had time for one stop in Germany and we had to make it count.

When most people think of Germany, images of fantasy castles, cruises along the Rhine River, or drinking lots of beer at Oktoberfest come to mind. But for me, the heart of the German experience should come from its capital city, Berlin.

Besides having plenty of national museums, Berlin has an interesting history and was center stage for many conflicts during the 20th century, including the Cold War. During the Cold War Berlin was deep in the heart of Communist East Germany, known as the German Democratic Republic. The city was divided in two with one side being Communist, and the other belonging to West Germany. While not many remnants of Nazi Germany exist today, there are still plenty of places to visit from the Cold War and when the city was separated. This is what I wanted to see!

As much as we should have booked a room at Accor, or one of the other fine hotels in Berlin, we ended up renting an apartment for a few days. Having an apartment with a kitchen sounded ideal, but the apartment was anything but. After arriving at the Berlin train station we made our way to the apartment. The upstairs neighbor (a friend of the owner) met us at the door with a cup of tea in one hand and a cigarette in the other. With his heavily accented English and mannerisms I immediately had a flashback to the Saturday Night Live comedy skit Sprockets. We had found Dieter! The apartment’s owner was a Russian artist, whose works of art hung on the walls. While I normally enjoy modern art, this work was… interesting. Thick globs of paint were applied to large canvases with no rhyme or reason. The artwork we could live with, but the strong smell of cigarette smoke, the cluttered apartment, and the dirty blankets and lack of sheets on the bed made us cringe. In Berlin, you get what you pay for!

Growing up During the Cold War

My mom would tell me stories of practicing ‘Duck and Cover’ drills in school during the 1950’s. Duck and cover is where the students would hide under their desks in the event of a nuclear attack.

By the time I entered school in the 1970’s ‘Duck and Cover’ was no longer practiced. My assumption is that after extensive nuclear testing and improvements to nuclear weapons for greater impact they finally figured out that hiding under a small school desk was pointless and was not going to save anyone. Instead, we just knew where all the fallout shelters were around town.

In the event of a nuclear attack by the Soviet Union, everyone knew that certain cities and military installations would be hit. My wife, Kerri, grew up in one of those areas and has an interesting story from her childhood:

I grew up towards the end of the Cold War in a town that is known for developing the atomic bomb: Los Alamos, New Mexico. During the Cold War, I remember feeling like there was the real possibility of nuclear war occurring and I remember running scenarios through my head of what I would do if it did happen.

I remember the day that I learned I had not been added to the fallout shelter card. We were sitting down to eat dinner when the subject was brought up and I remember feeling horrified that everyone else in the family had a spot in the fallout shelter, but I did not. I kept on thinking that I would be left behind to “survive” on my own. My parents patiently tried sooth me by explaining that in reality nuclear war would probably never happen and if it did happen there would not be enough time to make it to the fallout shelter. Despite these reassurances it did little to help sooth me at the time. Thankfully this never became a reality.

By the time the 1980’s came around, the Russians and Americans had built so many nuclear weapons that everyone knew if the day came, nobody would survive a nuclear strike. My friends and I would run through scenarios and play the game, “What would you do if they launched nukes and we only had 15 minutes to live.” Growing up with that kind of constant tension was a little unnerving.

While we played scenario games, Berlin was playing Spy vs. Spy and was where the real action in the Cold War was happening. The western media constantly covered the stories of the daring escapes of people from East Berlin to West Berlin. Even in James Bond and other espionage movies, Berlin was often the setting. While growing up I dreamt of someday visiting there and seeing the Berlin Wall and Checkpoint Charlie in person.

And then the unexpected happened. On November 9, 1989 the Berlin Wall fell and within the following year Germany was reunified as a single country once more.

This year marks the 25th anniversary of the fall of the Berlin Wall. For many, the Berlin wall was a symbol of the cold war and its’ fall marked the end of decades of tension and the real possibility of a nuclear strike.

Most of the Berlin Wall was torn down following the fall, but a 1.3 kilometer section still remains today. This section is now called the East Side Gallery and is an international memorial for freedom. The gallery consists of 105 paintings done by artists from all over the world. The paintings were originally painted in 1990 and have been restored as needed. A walk along this remaining section of wall and viewing the politically charged paintings is unlike any other art gallery you will ever visit. 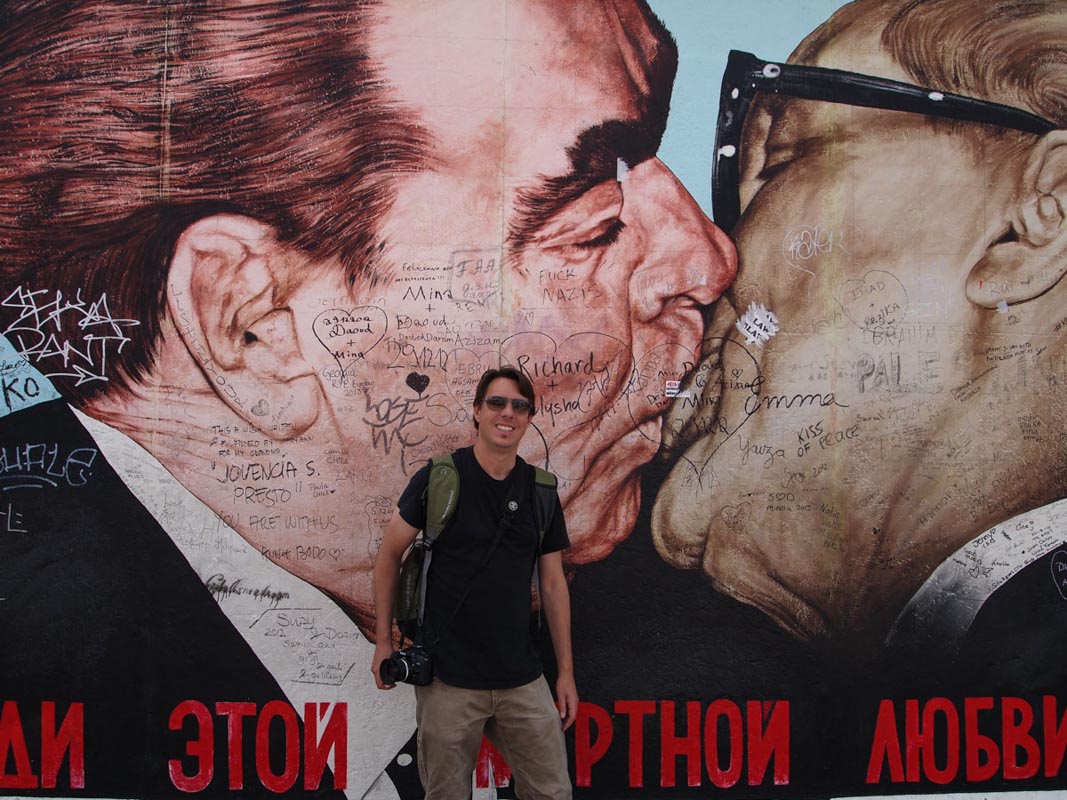 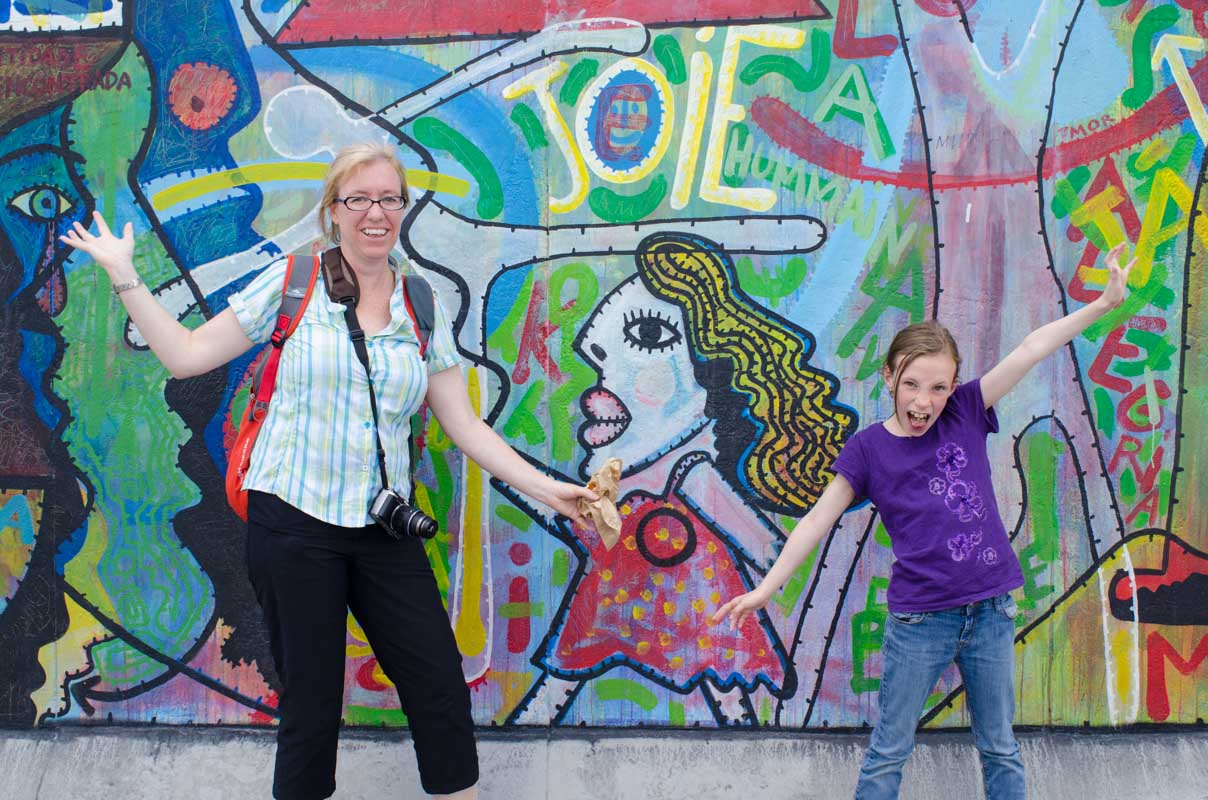 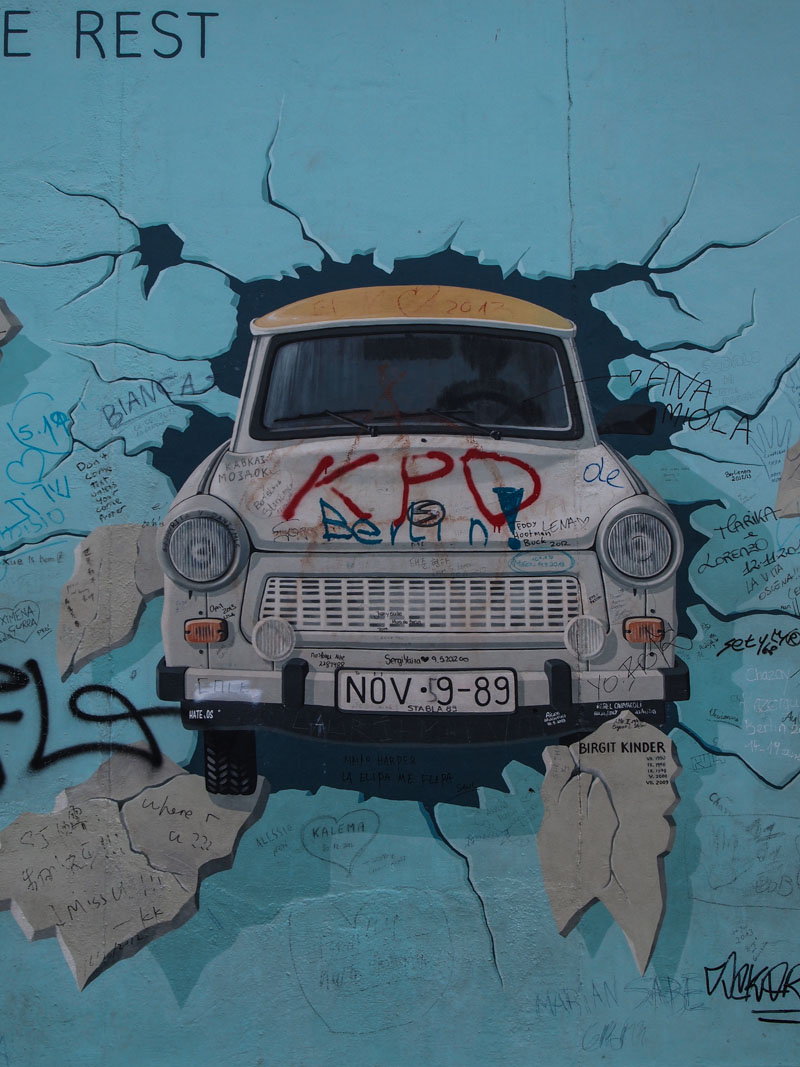 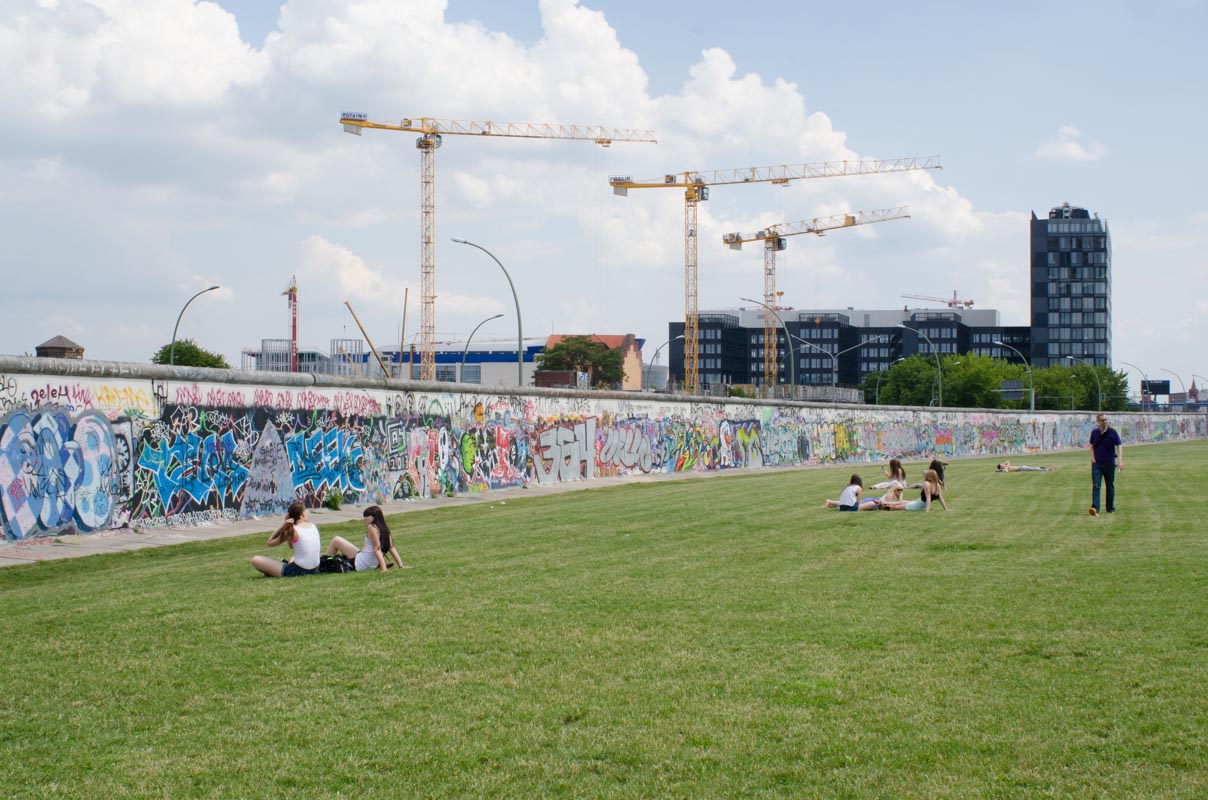 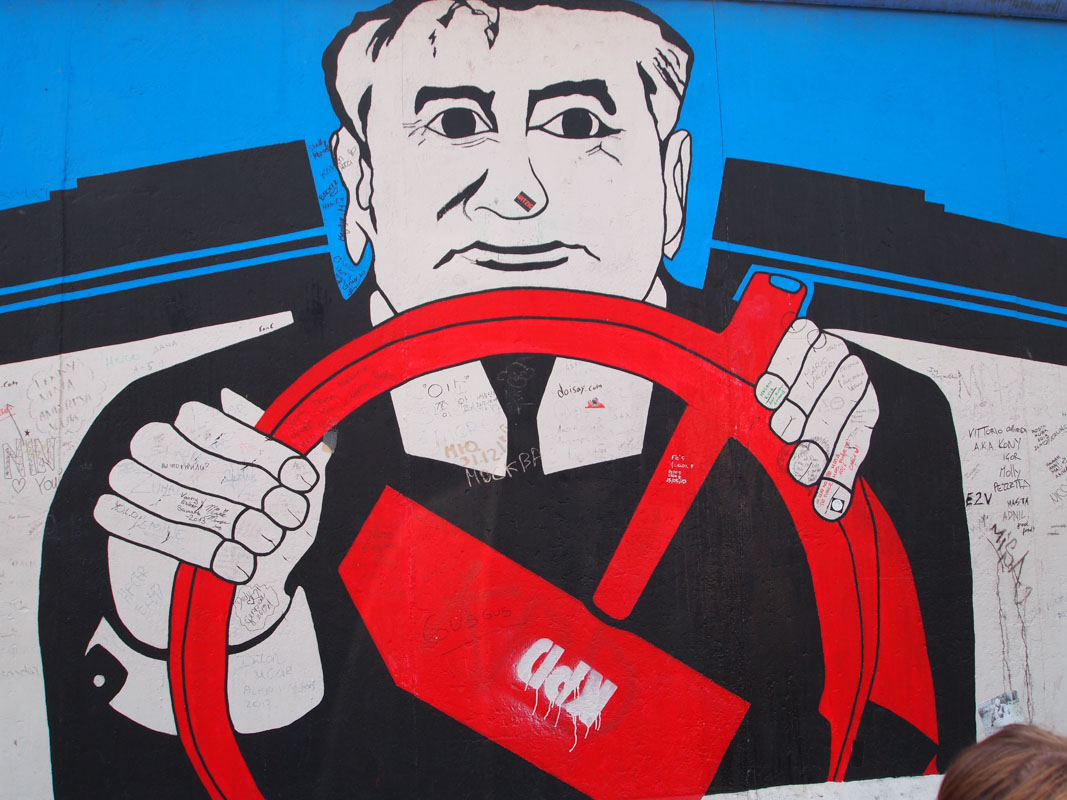 Checkpoint Charlie, or Checkpoint C, is the name of the most infamous crossing point between East Berlin and West Berlin during the Cold War. The name Charlie came from the letter C in the NATO phonetic alphabet. Today it is a tourist attraction with a museum where you can learn about the history of Checkpoint Charlie. The museum also contains information and photos from the many successful escape attempts from East to West Berlin. 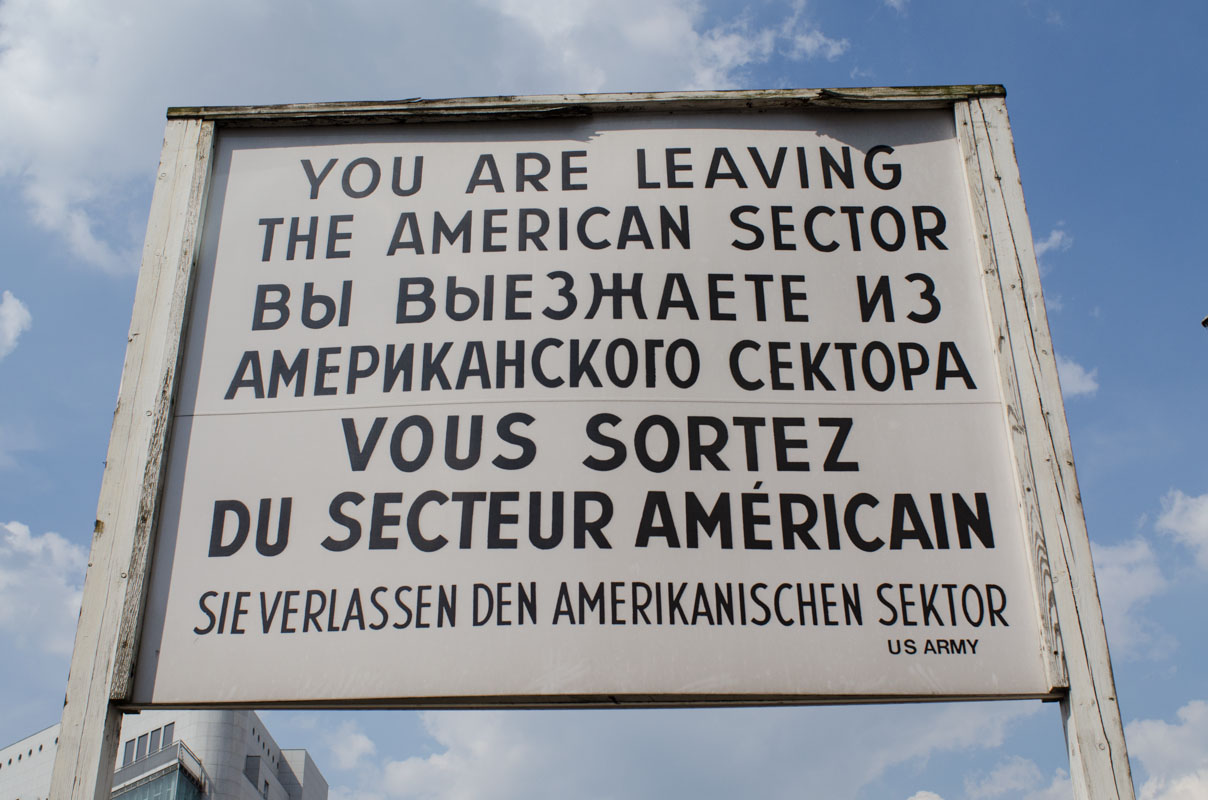 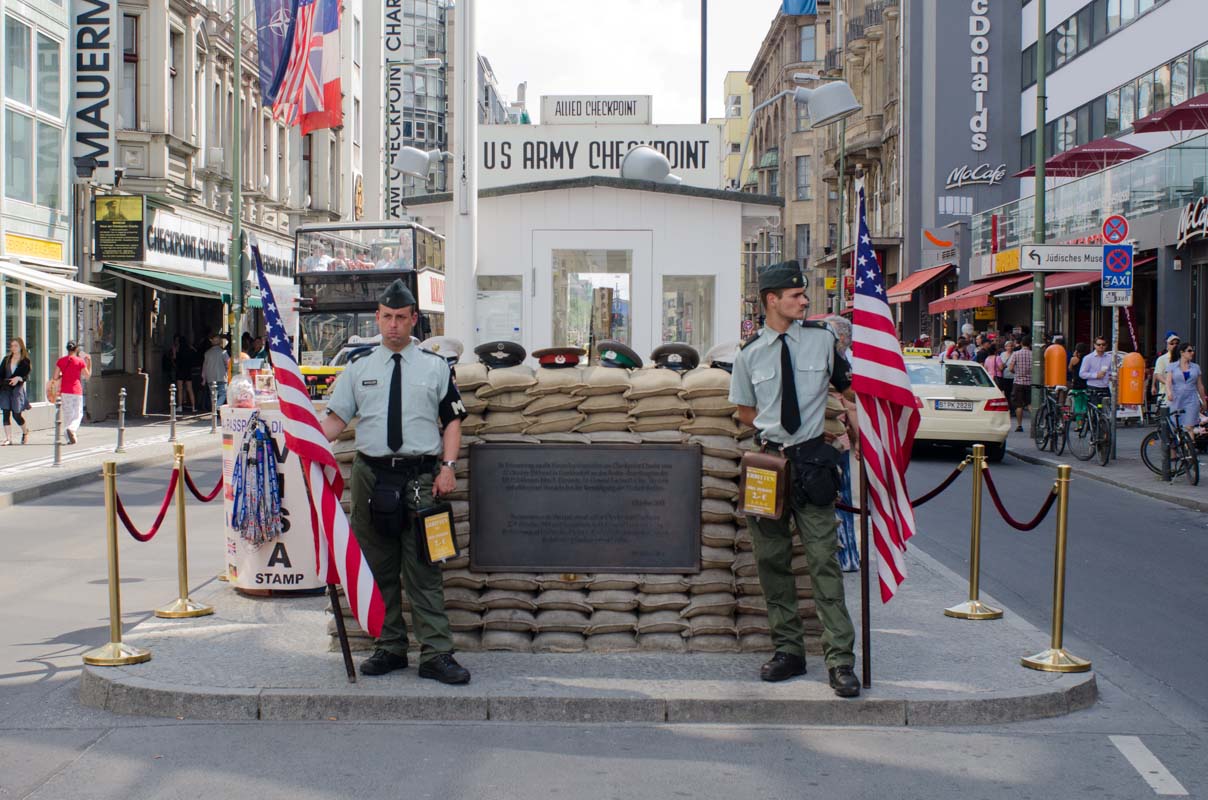 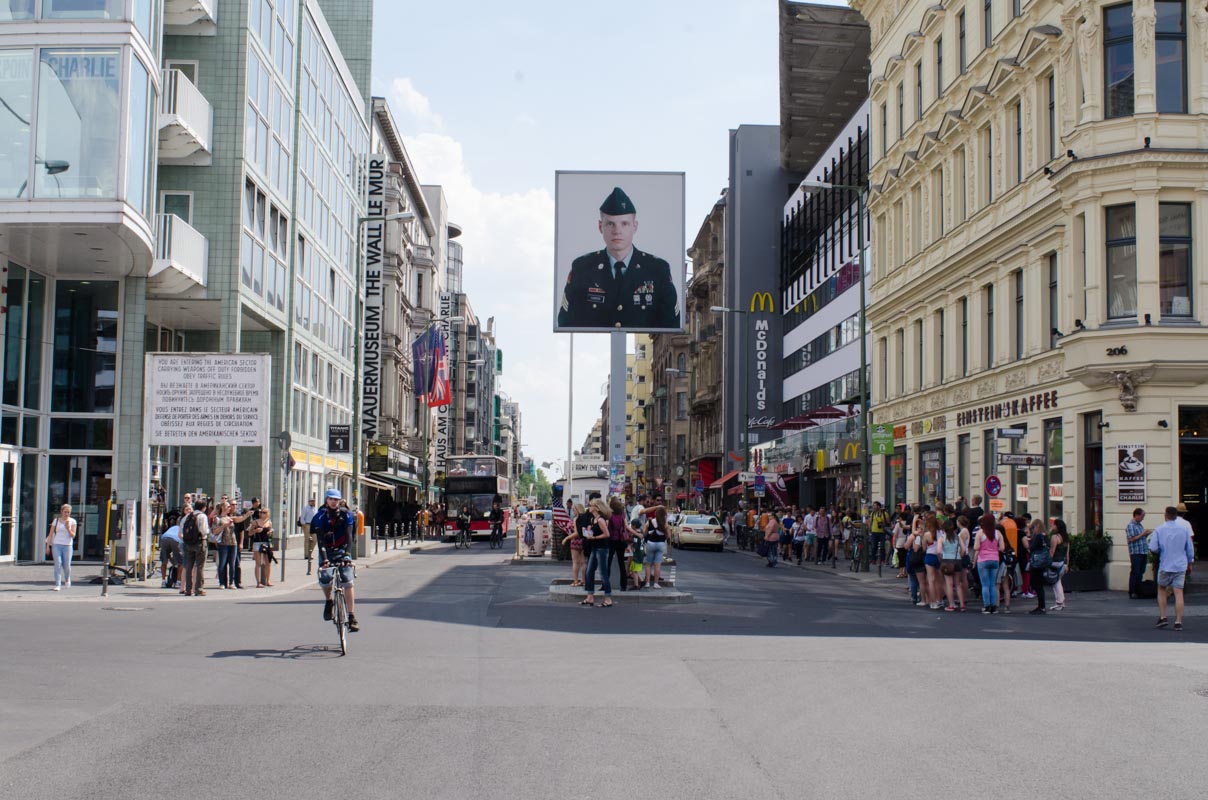 Near Checkpoint Charlie you can find many currywurst stands offering a popular street food that was invented in Berlin in 1949. Currywurst consists of sliced sausages smothered in a curry ketchup sauce and is now one the best foods I have tried in our world travels. Seriously! 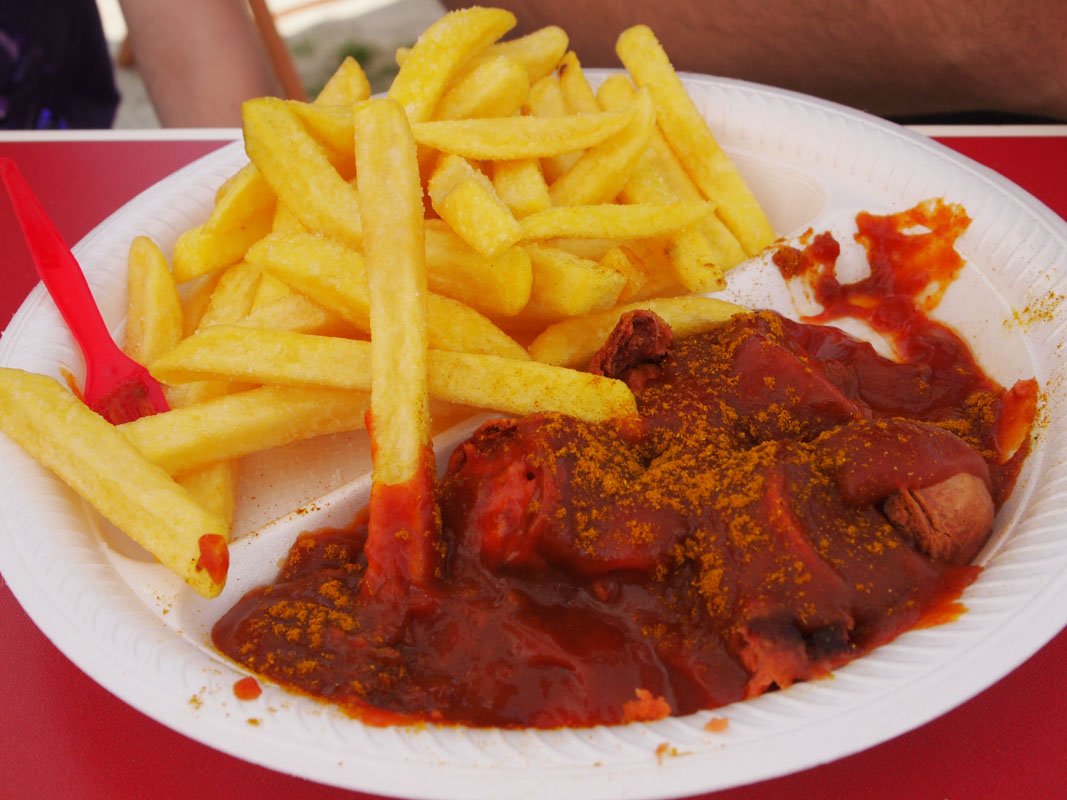 Having now been to Berlin I can honestly say that it is now one of my favorite places in Europe. It has been a lifelong dream of mine to see the Berlin Wall and Checkpoint Charlie in person, and it did not disappoint. Our short stay there was not long enough and I would love to return someday and spend more time there.