While planning our route through Vietnam one of the places I was most looking forward to visiting was Hoi An. Many travellers we had talked to had absolutely raved about the place.  However, our two-week long stay in Hoi An, Vietnam became a love-hate relationship.  I found the people to be incredibly grumpy, which is contrary to what we had experienced in other parts of Vietnam.  But then there were these other qualities of Hoi An. I loved how at night Hoi An turned into this magical place with its’ electric lamps twinkling in the twilight and the paper lanterns floating down the Song Thu River.  I also loved the brightly painted historic buildings and tailor shops.  But what I loved most about Hoi An was how bicycle friendly it was. 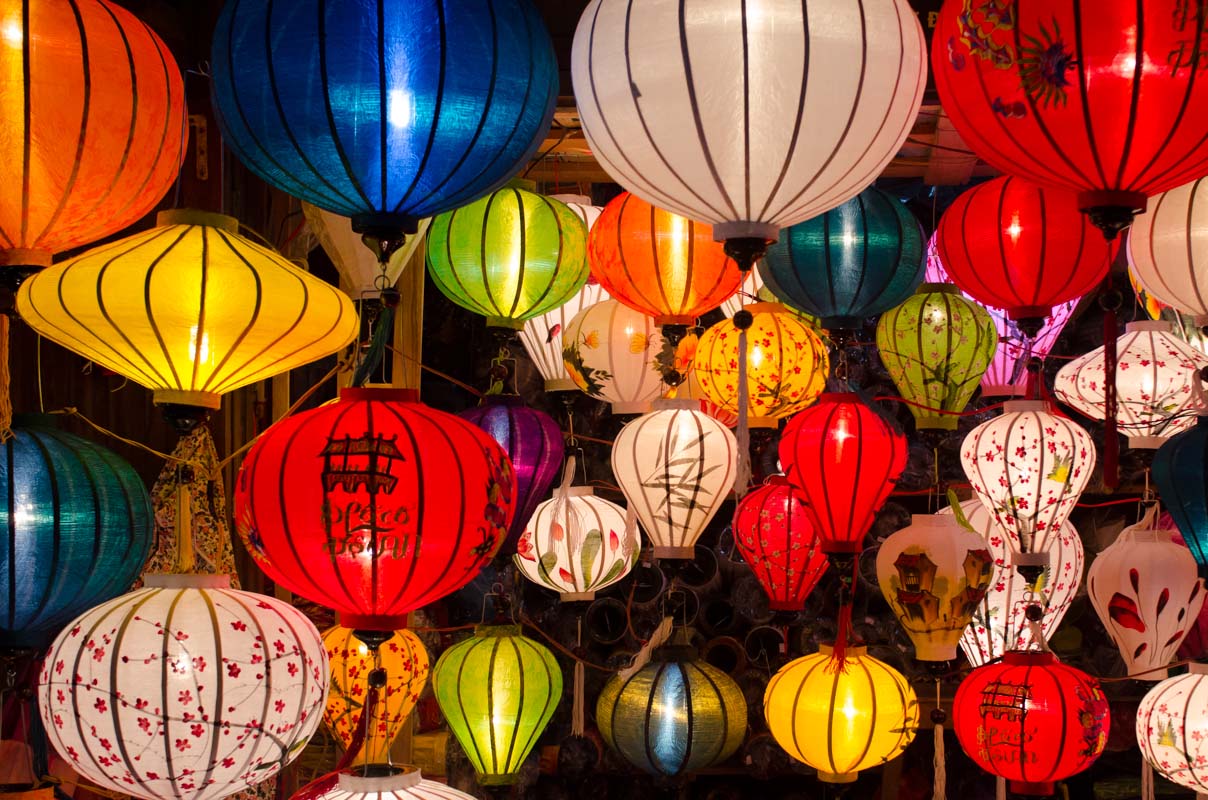 Electric lamps of Hoi An 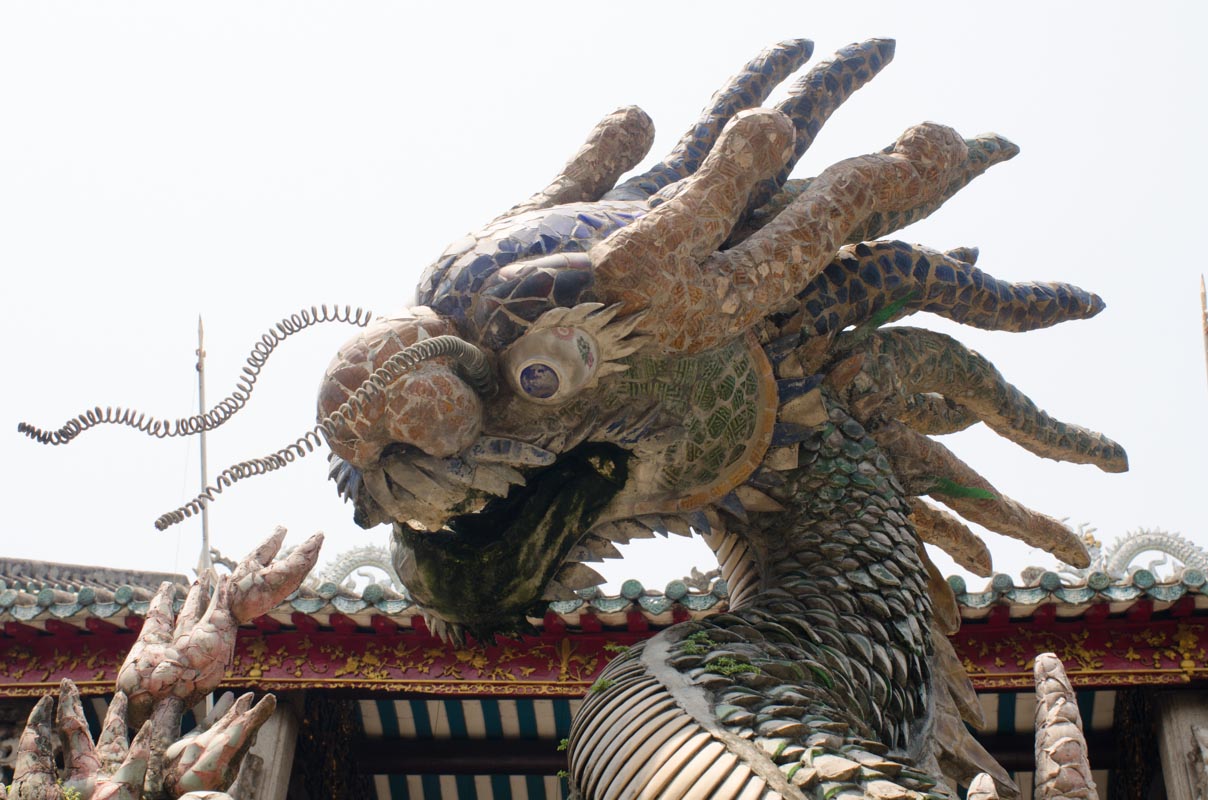 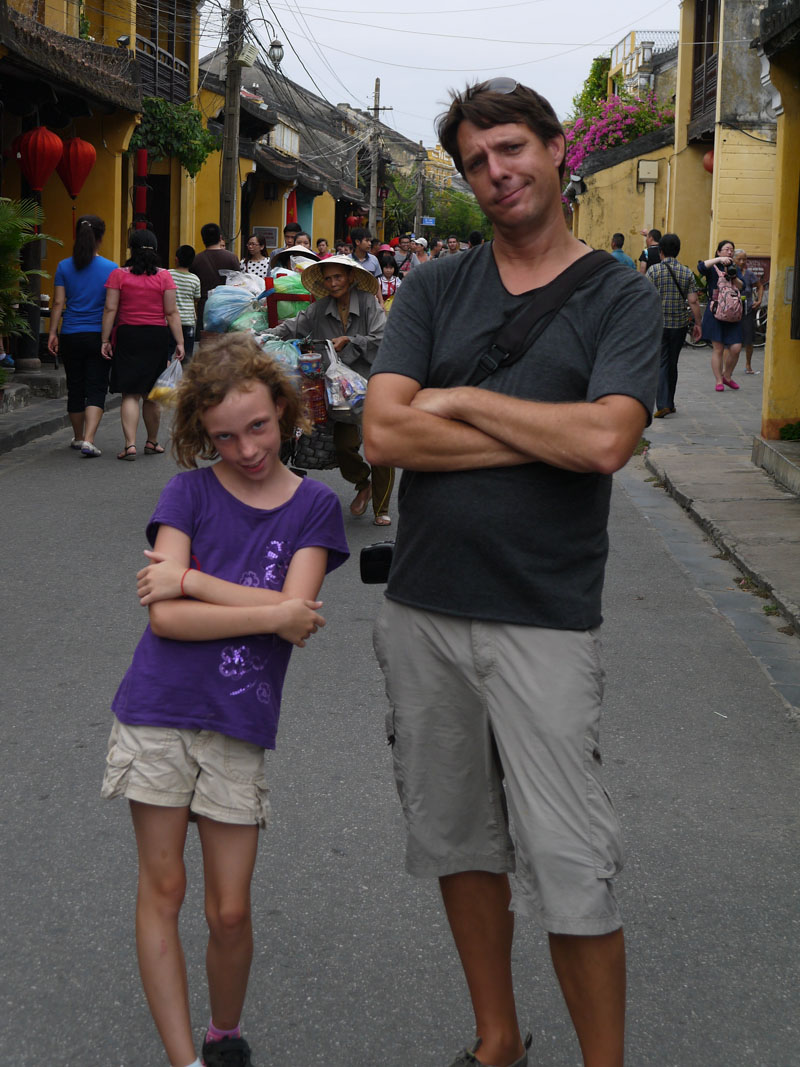 Kickin’ it in the Historic Center of Hoi An

Anyone who really knows me knows that I love bicycling.  They also know how hard it was for me to say goodbye to my bicycle before we left on our around the world adventure.  Before we left I owned this lovely yellow cruiser bike with a basket, bell, and big cushy seat.  I have missed not being able to ride bicycles as often as I used to, so anytime I find a place that is bicycle friendly makes me jump for joy and insist that we have to give it a try. 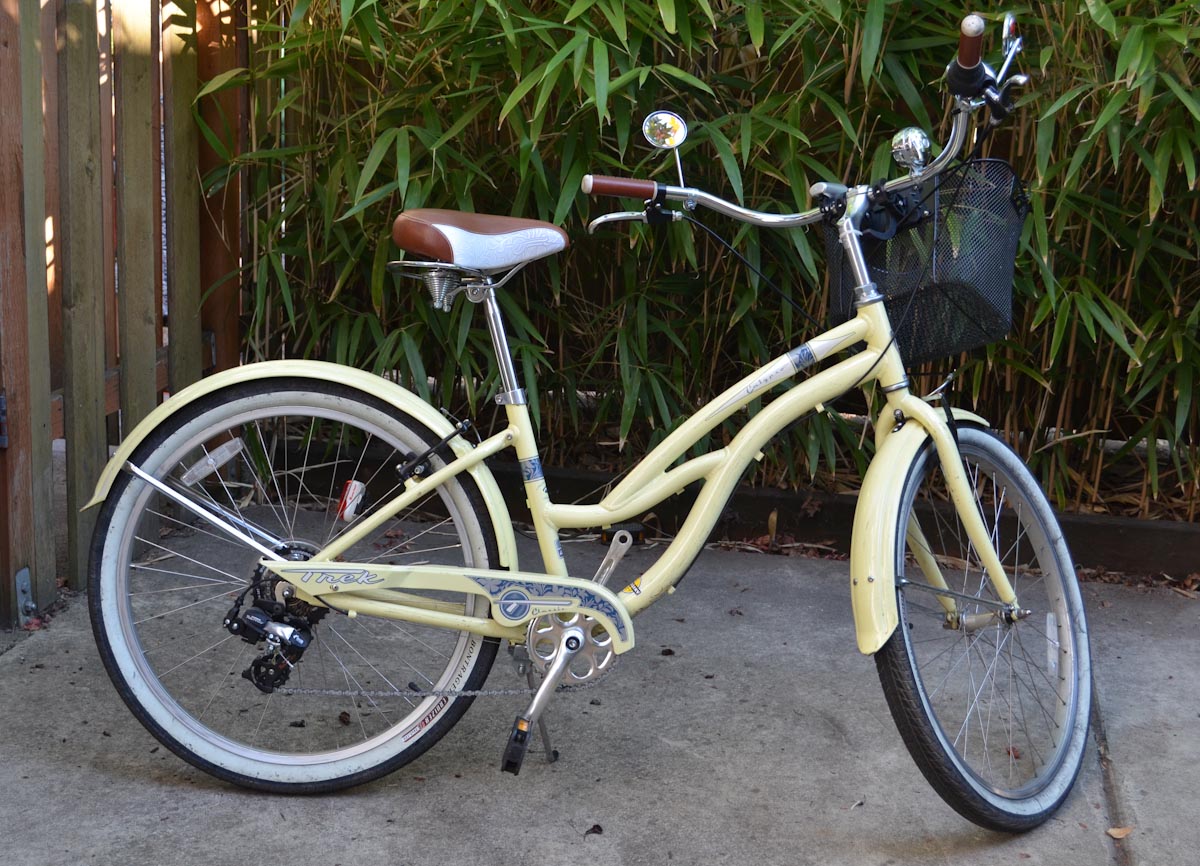 My beautiful yellow cruiser back in Portland

When we first arrived in Hoi An we noticed all the shops renting bikes.  Seeing this I convinced Jason that we had to rent a couple bikes. So we walked around to several shops and street vendors inquiring about prices and whether they had a smaller bike for Sydney.  With no luck finding a bike Sydney’s size, we settled on 2 bikes with an extra padded seat in the back.  We paid less than $1 per day per day per bicycle and we were off.  At first I was a little intimidated by the traffic of Hoi An.  The video below is of one of the more crazy intersections near the historic center.

However, I soon discovered that with a little confidence the traffic is not so hard to navigate.  But also within a 10-minute bicycle ride the crazy city traffic rapidly gives way to tranquil rides that any family can do.  Don’t let my video dissuade you from renting bikes if you end up in Hoi An.  Bicycling around Hoi An was definitely a highlight for us.  During our stay, we enjoyed just riding down random country roads to see where we would end up. Doing this we were able to explore some of the beautiful Vietnamese countryside and got to experience life outside of Hoi An.  Here are some of the places we especially enjoyed riding to. 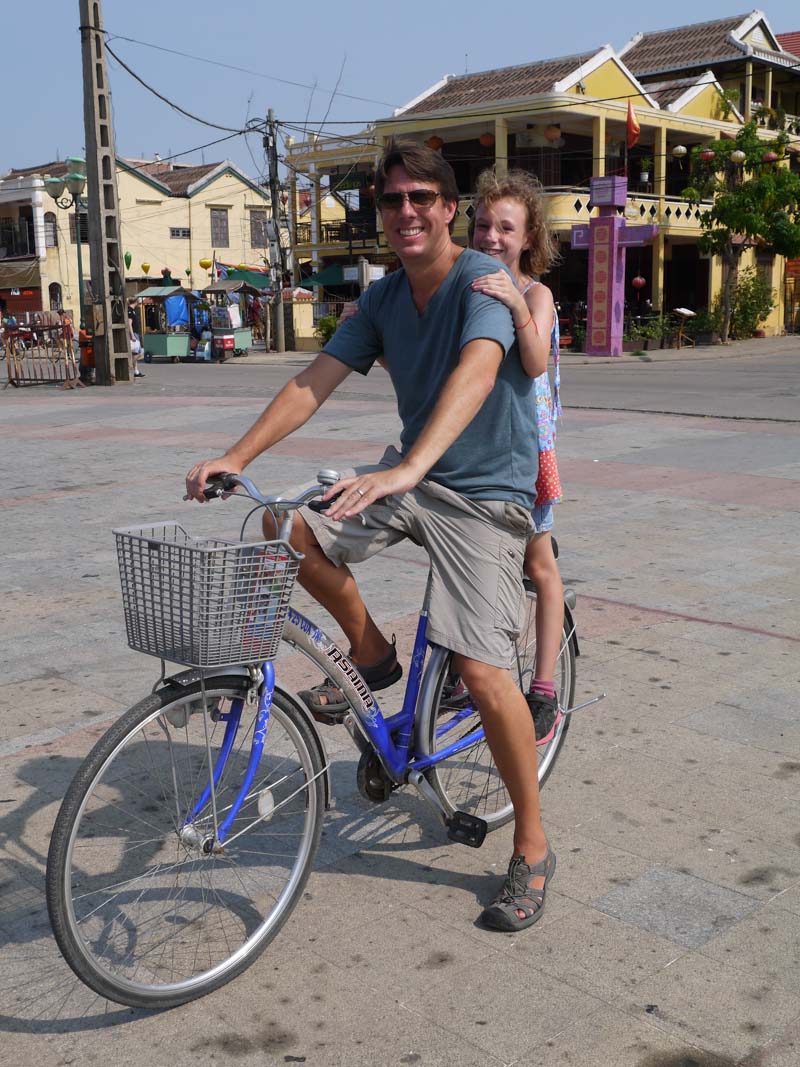 Jason and Sydney riding around Hoi an

Thanh Ha Pottery Village is located about 4 kilometers from the historic center of Hoi An.  During the 16th and 17th century it was known for its’ beautiful earthenware and made the bricks and tiles for the historic buildings of Hoi An.  Today a small community of artists still exists in the village.

While exploring the village we enjoyed watching master potters at work creating some amazing pieces of art.  I am always amazed when someone is able to create exquisite works of art out of nothing and make it look so effortless.  While in the village we also had the opportunity to try our hands at the potter’s wheel. I can easily say my pot was not nearly as nice as the masters. 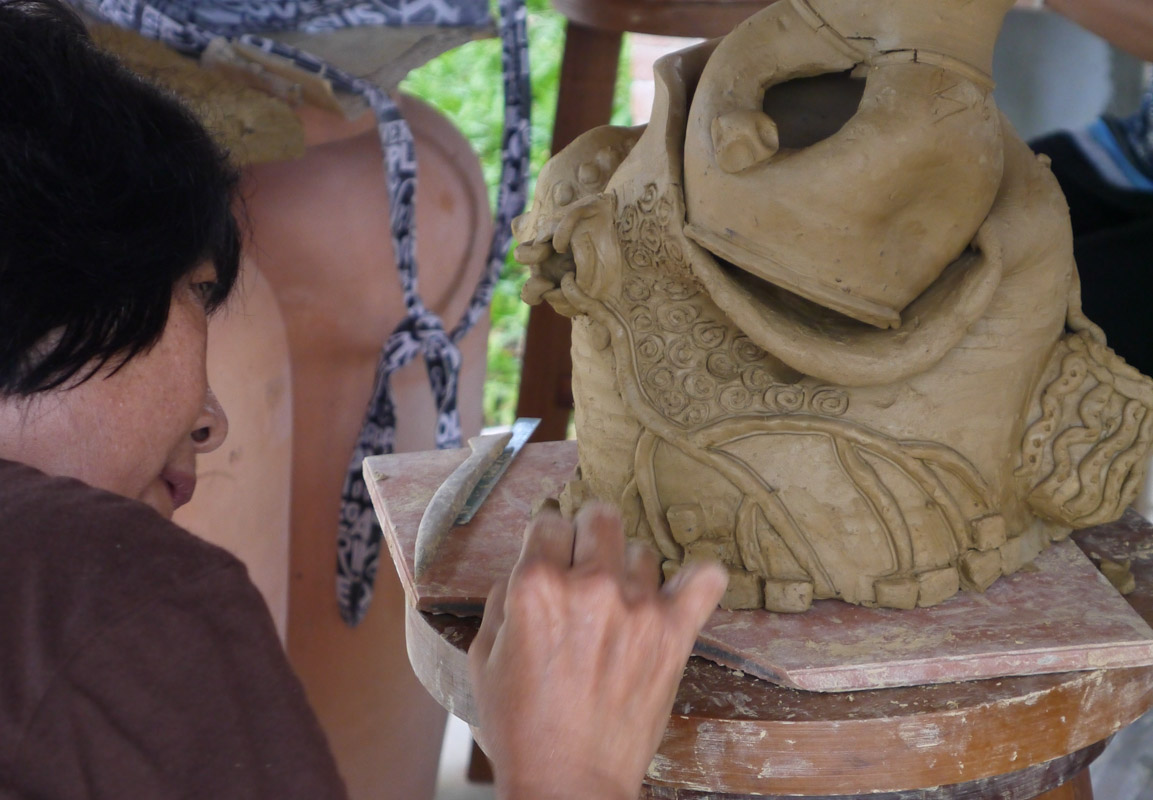 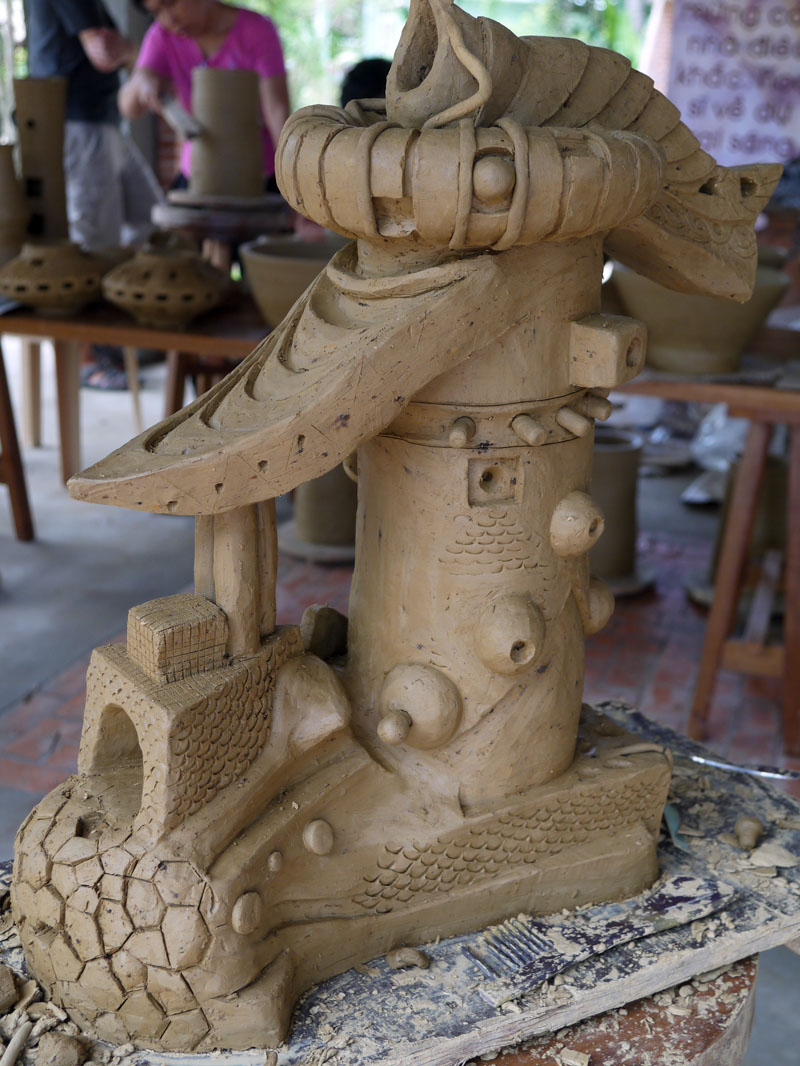 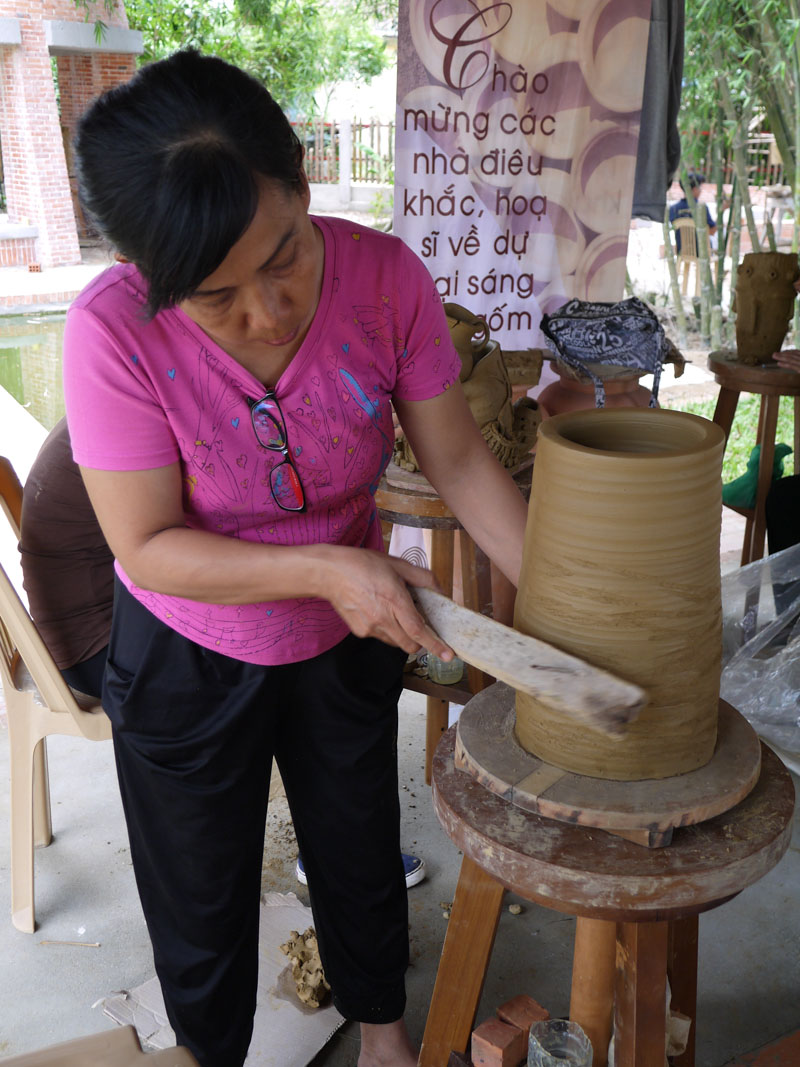 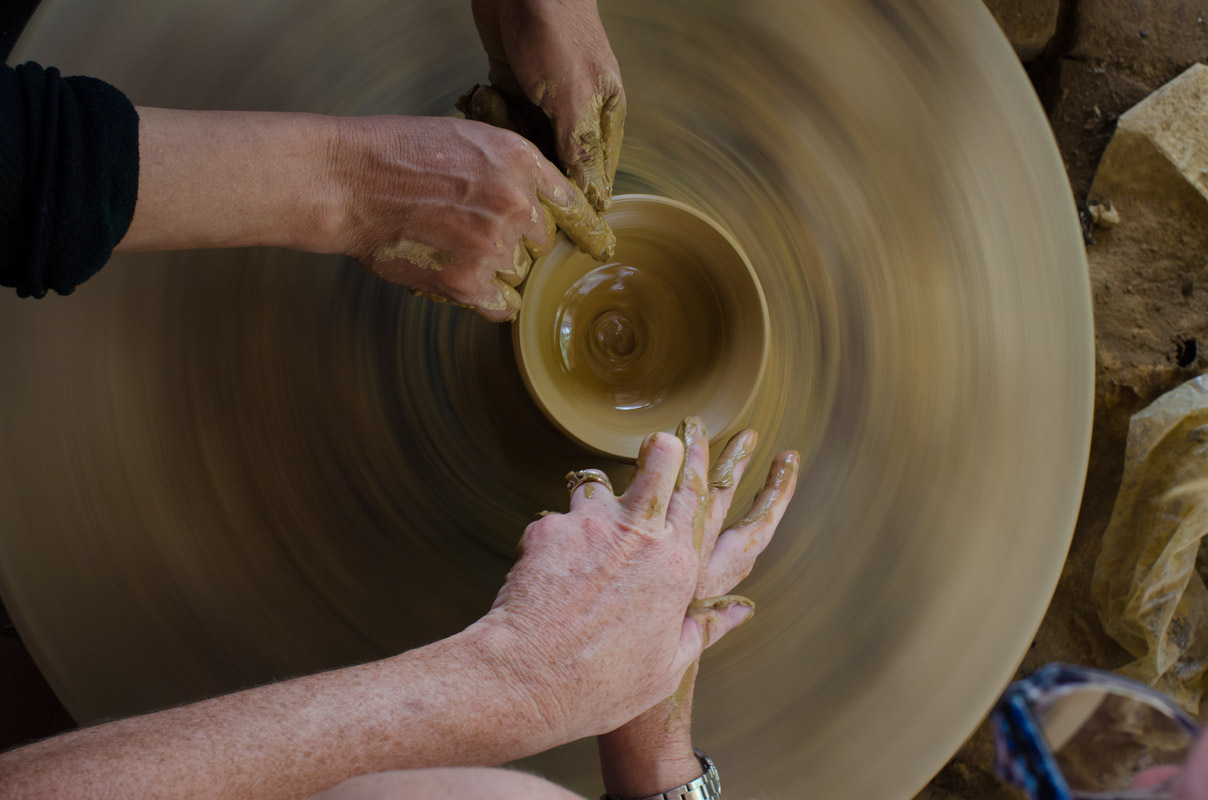 In order to reach Thanh Ha Pottery Village follow the road (Nguyen Du) going west along the river.  This will rapidly give way a bicycle path, which is traffic free.   Close to the village you will briefly end up on the busier road Hung Vuong.   At the Y in the road take the left.   There is a small fee of 20,000 VND per person to visit the village.

There are two popular beaches near Hoi An called An Bang and Cua Dai.  Both are nice beaches within an easy bike ride from the city center.  Both can also be crowded and touts will frequently walk along the beach selling all sorts of stuff.  You will also be charged to park your bike (10,000 VND per bike.)  However in our wanderings we discovered a beach we liked more called Hidden Beach.  Hidden Beach definitely does not have the crowds like the other beaches and bicycle parking, beach chairs, showers and bathroom are available for the charge of a drink.  The drink price is around 20,000 VND.  We found Hidden Beach to be a great place for a leisurely day.  While in Hoi An we spent several days biking down to Hidden Beach, lounging on the beach chairs, reading, building sandcastles, and swimming in the ocean.   In order to find Hidden Beach, just look for the sign, which is located half way between An Ban and Cua Dai. 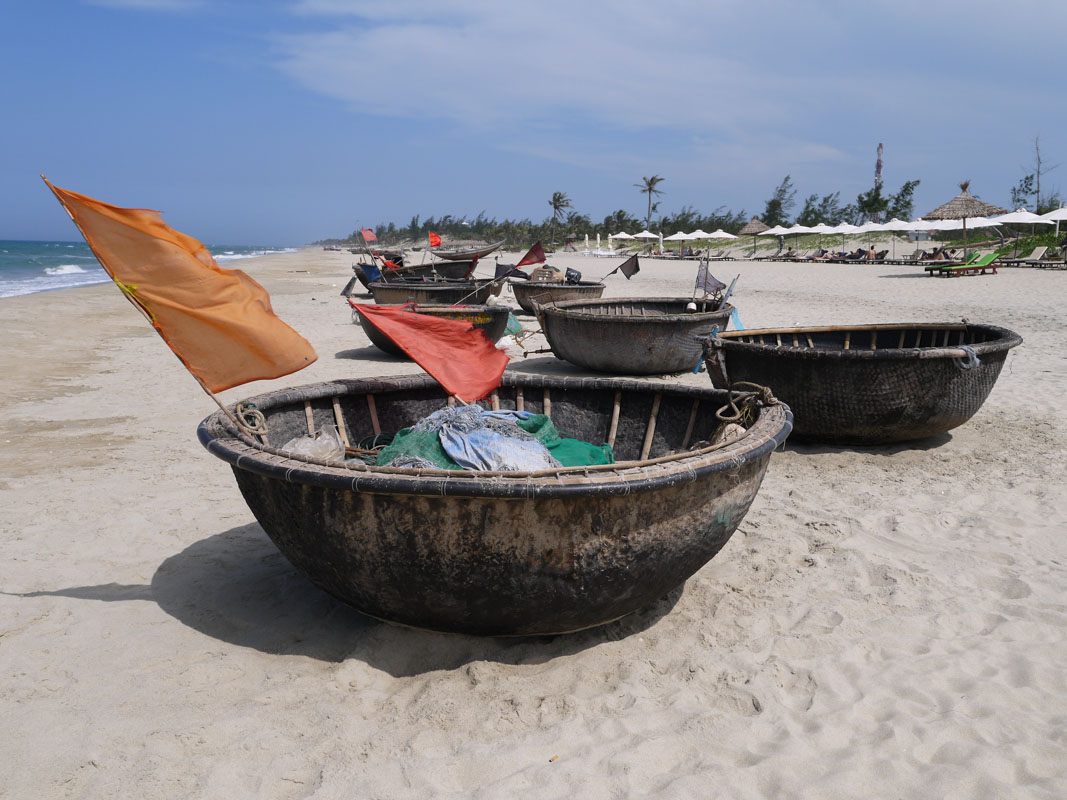 This was by far one of my favorite bike rides in Hoi An, as it is one of the more peaceful rides and offers a glimpse of life outside the city.  The bicycle path wanders along rice paddy fields, dikes, and nipa palm groves.  The nipa palm groves actually grow in water and people can be seen fishing from boats in the groves, while others lay palm leaves along the road and dikes to be used for thatched roofs after being dried.  While bicycling around the groves I encourage you to take random paths to see where you end up.  You never know what you will come across.  During one of our bicycle rides, we came to a place where they were offering basket boat rides through the palm groves.  It looked like it could have been a lot of fun.  We unfortunately did not have enough time to take a boat ride.  In order to reach the palm groves head east out of town on Tran Nhan Tong road. 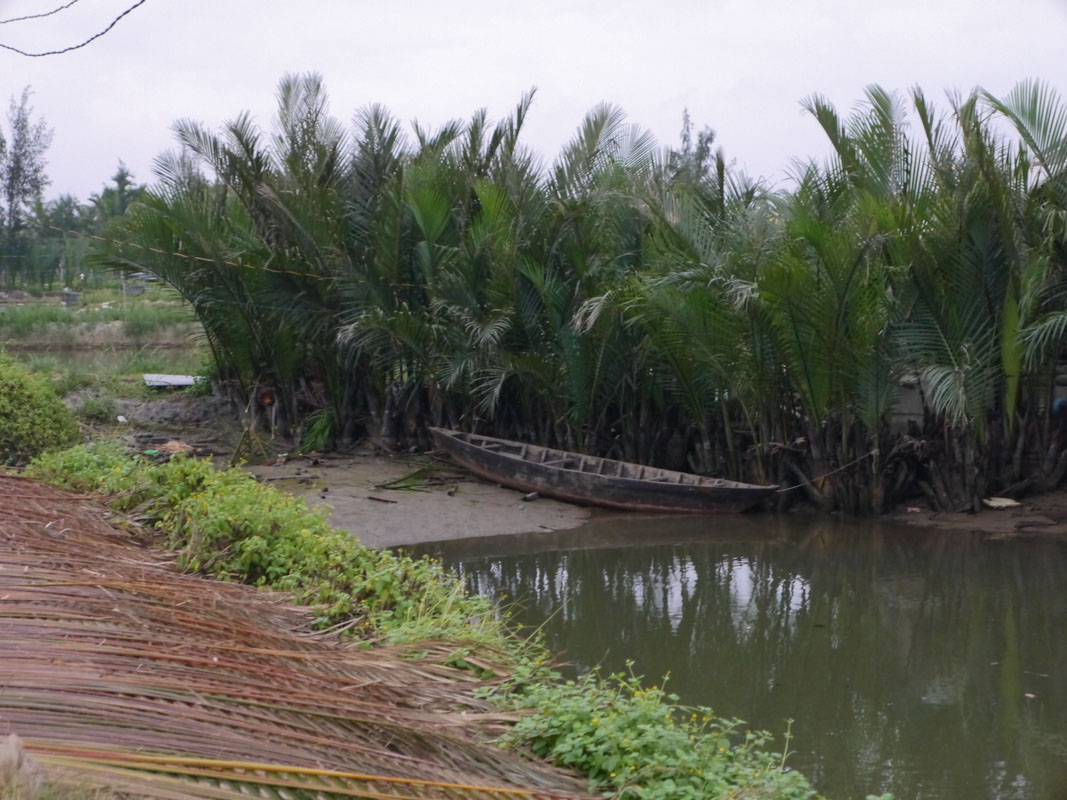 Riding bikes along the palm groves 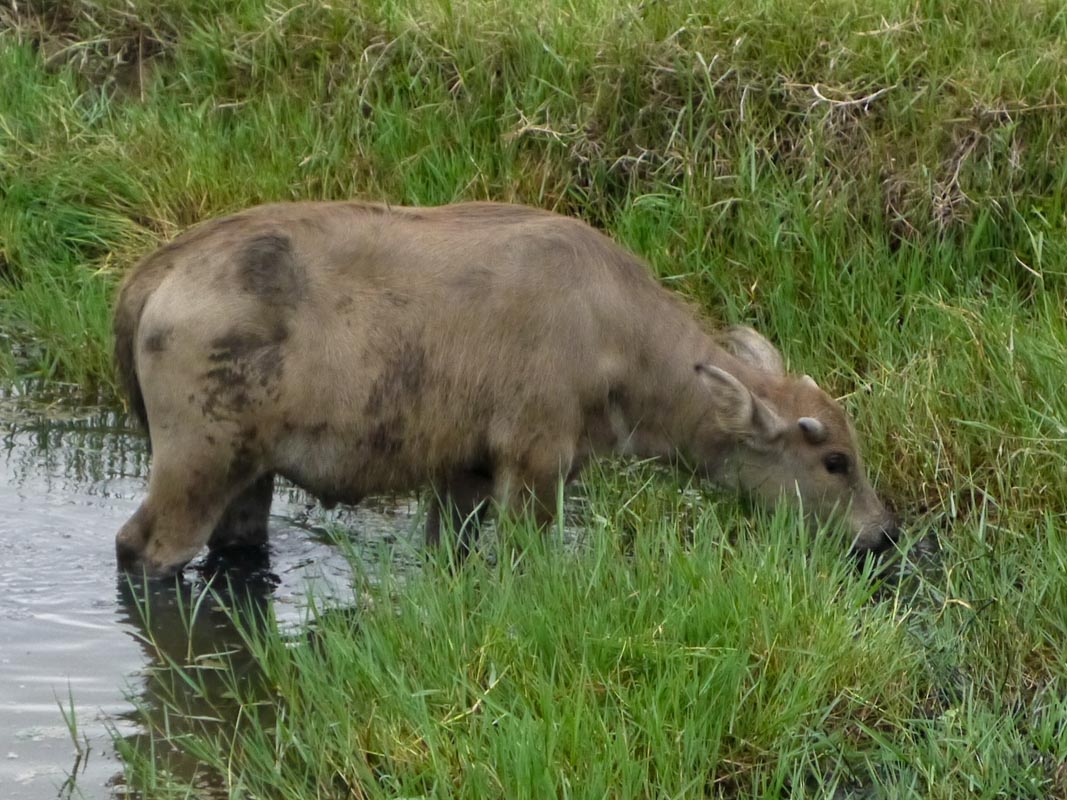 There is a nice bicycle path that runs along the Song Thu River, which starts at the Cau Cam Nam Bridge.  The path is mostly traffic free. Only occasionally can a lone scooter be spotted along the path.  While bicycling, we were able to watch boats making their way up and down the river and people fishing without having to concentrate on dodging traffic.  Along the path, there are several cafes where one can stop for a coffee and further enjoy watching life on the river. 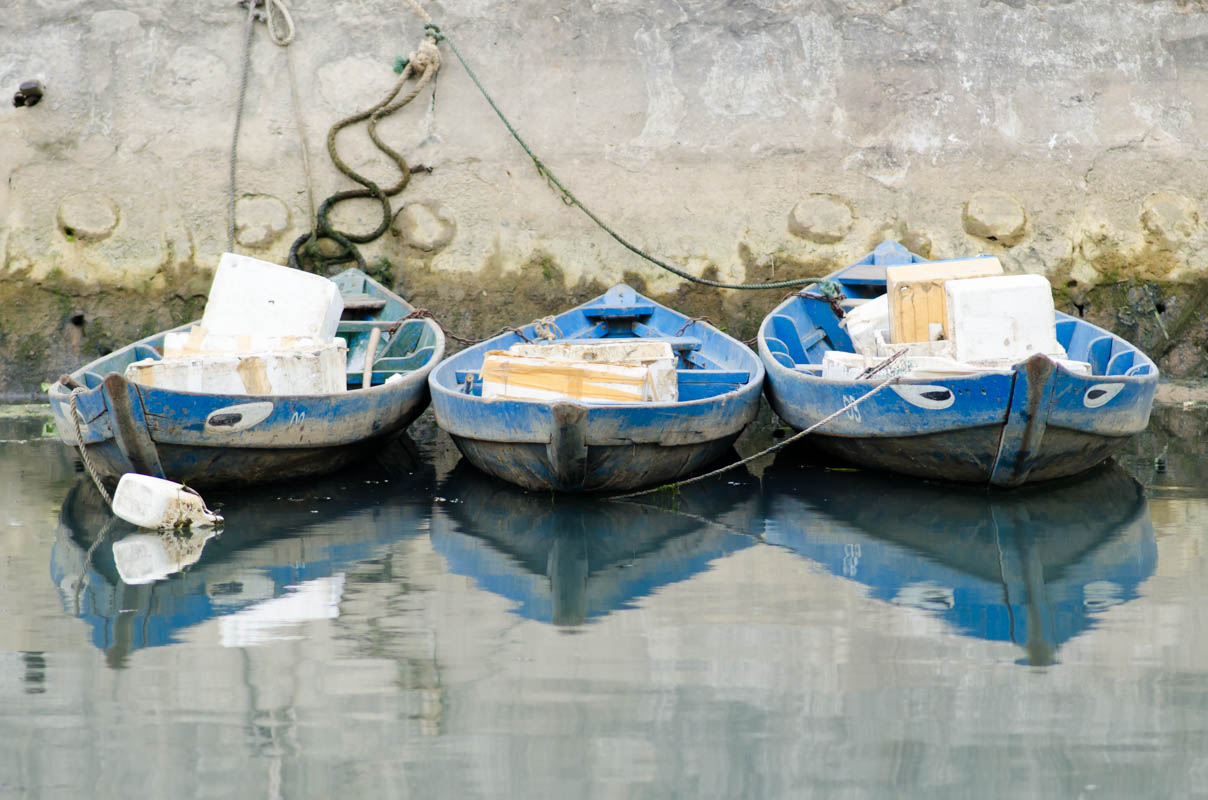 Fishing along the Song Thu River 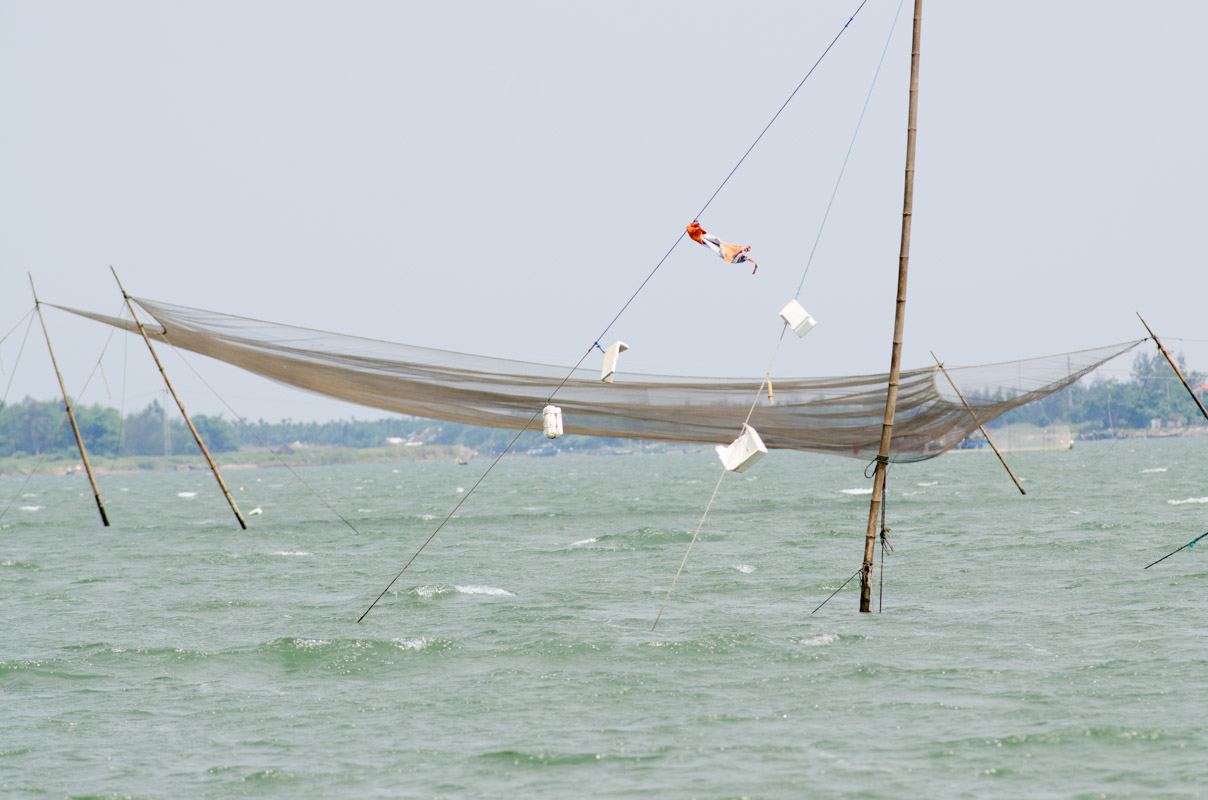 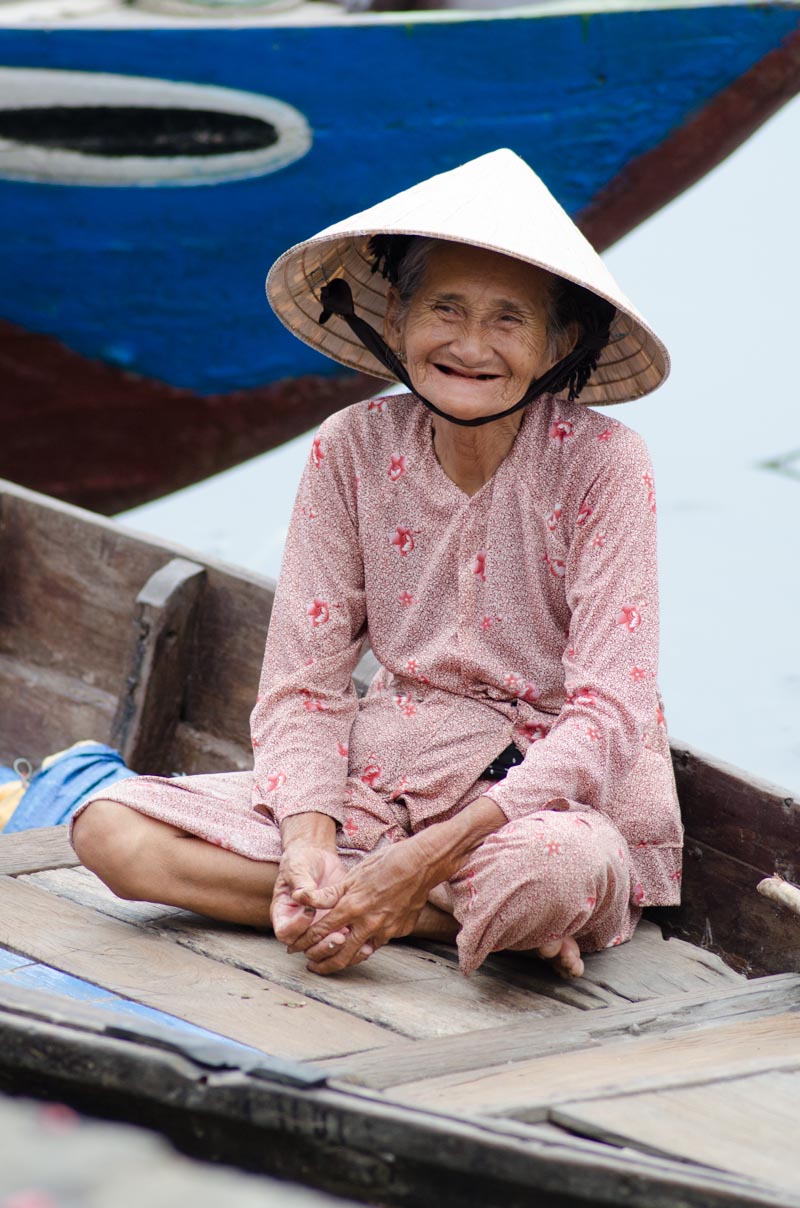 Bicycling in Hoi An was definitely a highlight for me and at the end of our time I was sad to say goodbye to our bikes.  It is always a good day when I can find a place that is bicycle friendly. I too hope that you have the opportunity someday to enjoy bicycling in Hoi An.