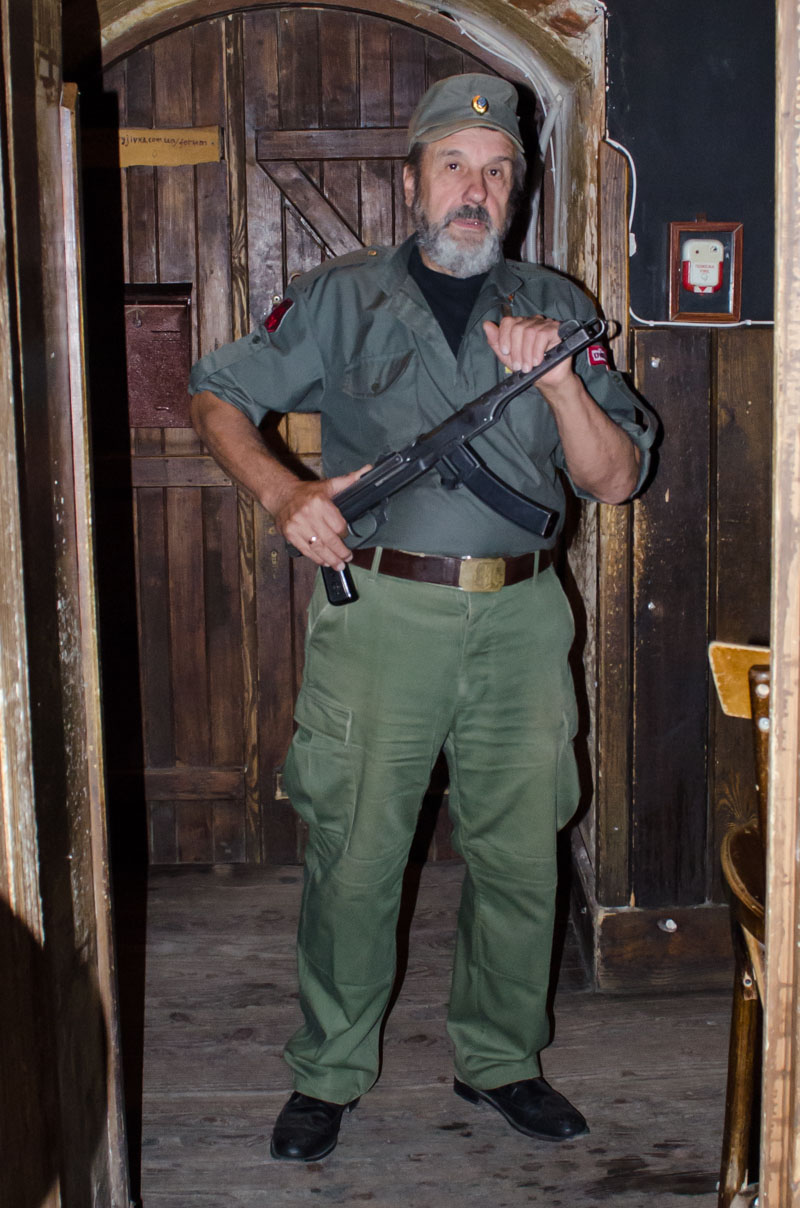 “Slava Ukraini!” (glory to Ukraine!”), growled the bearded guard while pointing a machine gun at us.

The employees at the tourism office in L’viv, Ukraine had recommended a restaurant across the street called Kryjivka (the bunker.) They said we would find it… interesting. Since it was lunchtime we figured we would head over and check it out. The first problem was locating it. There is no sign for the restaurant, but the tourism gave us an address and told us to knock on the door. That was all they told us! The tourism office is located in the center of Rynok Square and the address we were looking for was a short walk to the edge of the square. 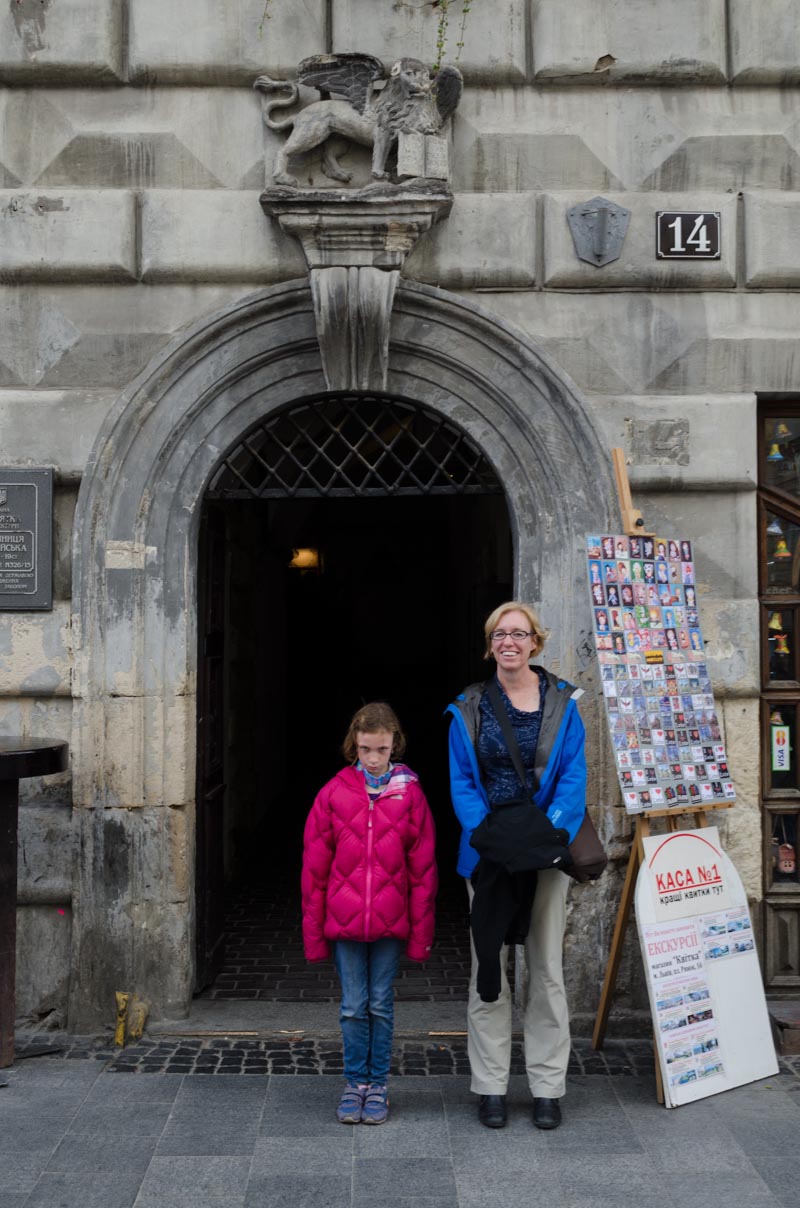 We walked down a passageway, typical for the buildings in L’viv, and found an unmarked door at the end. I knocked on the door, as instructed, and a peephole panel slid open.

“We are looking for the café. Is this it?” I asked the person peering though the peephole in the door.

The door swung open and a guard in a military uniform pointed a wicked looking machine gun at us and stated loudly, “Slava Ukraini!”

My wife, not in the mood to be shot, stated, “Sorry, wrong door.” And quickly dragged our daughter back down the passageway and away from the armed guard.

Me, thinking getting shot could make for an interesting article, continued my questioning of the guard, “We are looking for the restaurant. Is this it?”

“Moskal’ee YE?” (“Are there any Russians among you?”), asked the guard while looking suspiciously at my wife and daughter running away.

Not having a clue as to what the Ukrainian guard was saying, I asked again, “Restaurant?”

The guards face turned from a scowl to a huge smile, and he put his arm around me and ushered me into the small room. I called back to my wife and daughter to come back. After the wife and daughter suspiciously entered the room, the guard closed the door and poured me a shot of vodka and handed it to me. I drank the sweet flavored vodka and the guard smiled and opened a hidden panel behind a bookcase that led to a stairwell leading down. Even if this was not the restaurant we were looking for, this would be an interesting adventure!

The stairs led down to an underground bucker filled with weapons, war memorabilia, and a well stocked bar. We had found our restaurant! We wandered around a bit looking for a table and around every corner there was something new to explore. We grabbed a table and the waitress brought us menus. We ordered a cheese plate, pierogies, and a potato with cheese and sausage skillet. The food was simple, but the atmosphere was amazing. During our meal some guerillas came in and fired off a pistol inside the restaurant that left our ears ringing. They went to a table and dragged away one of the customers. He eventually came back unscathed and finished his lunch. 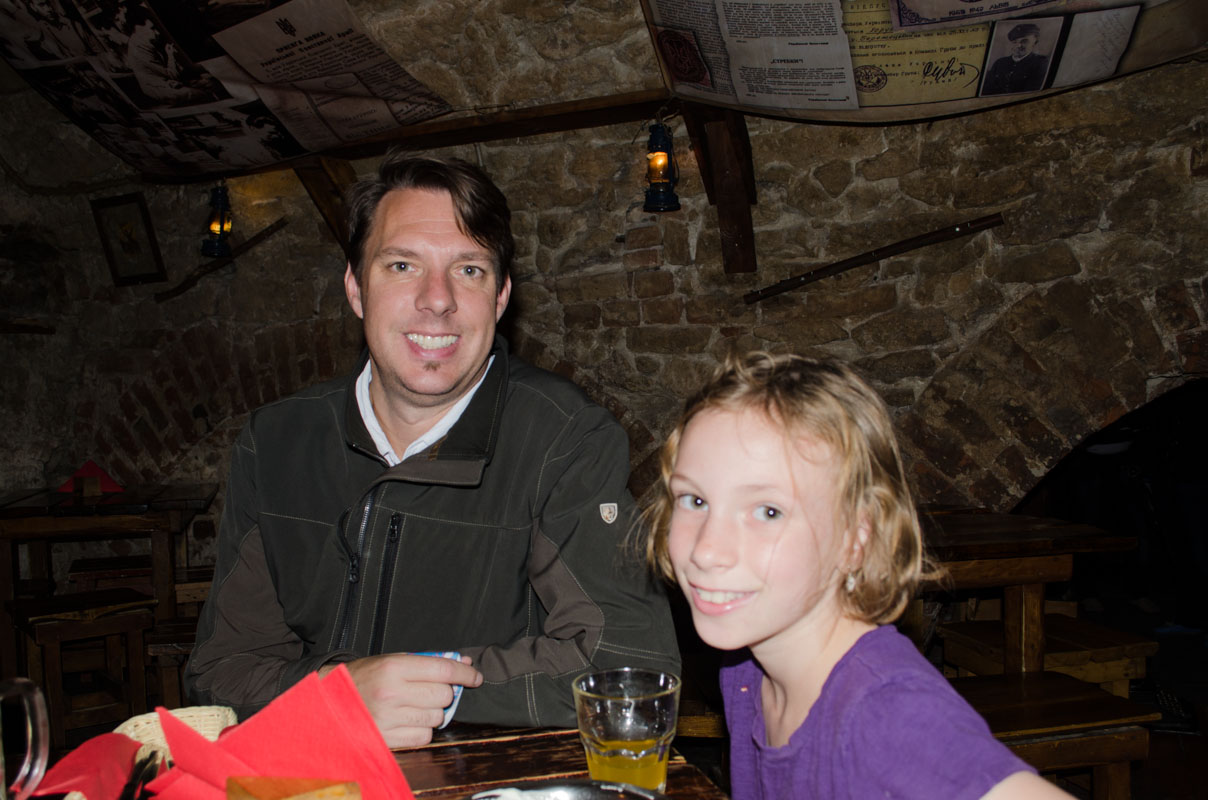 Having lunch at Kryjivka Restaurant 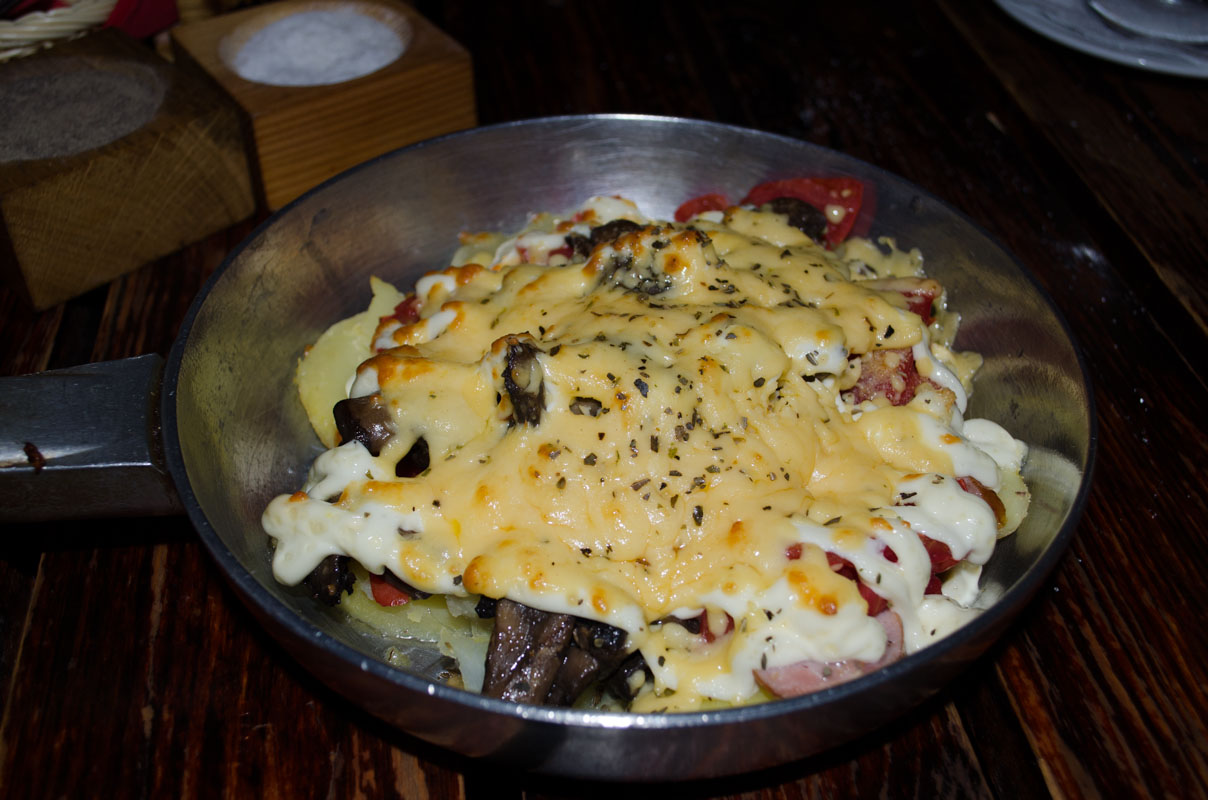 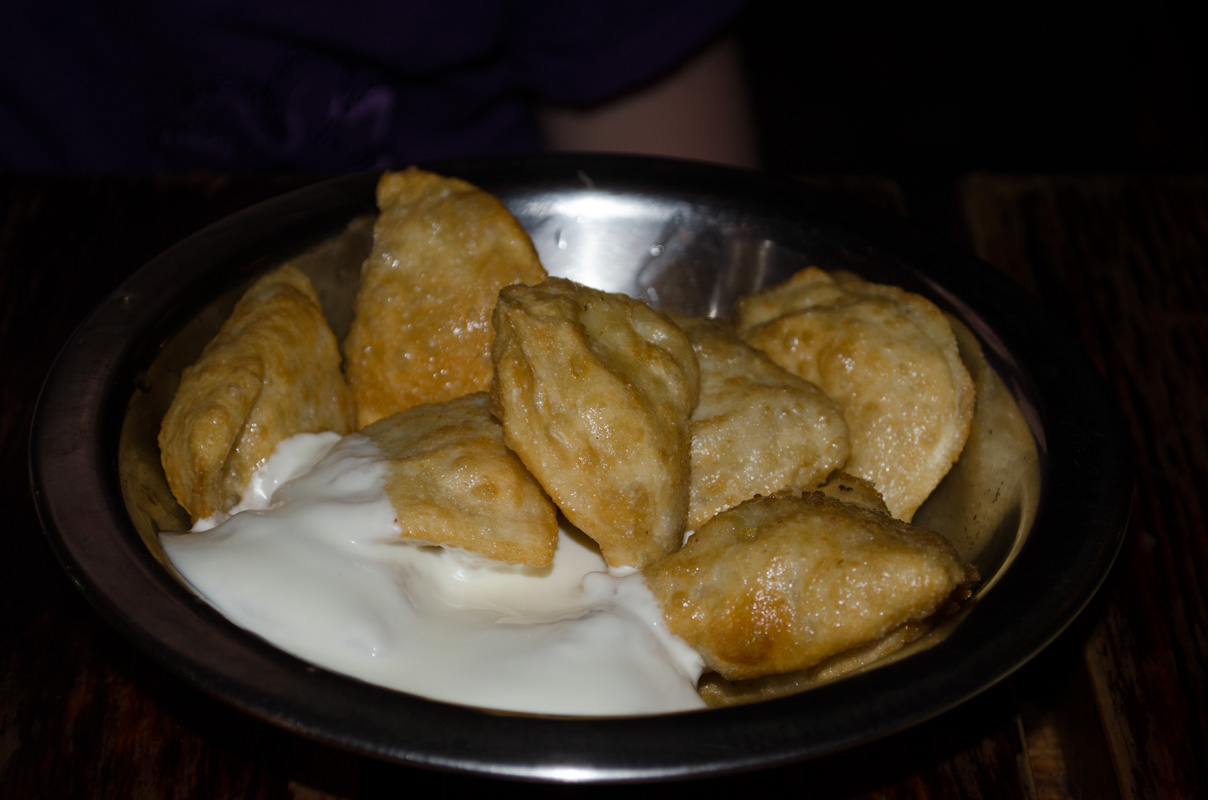 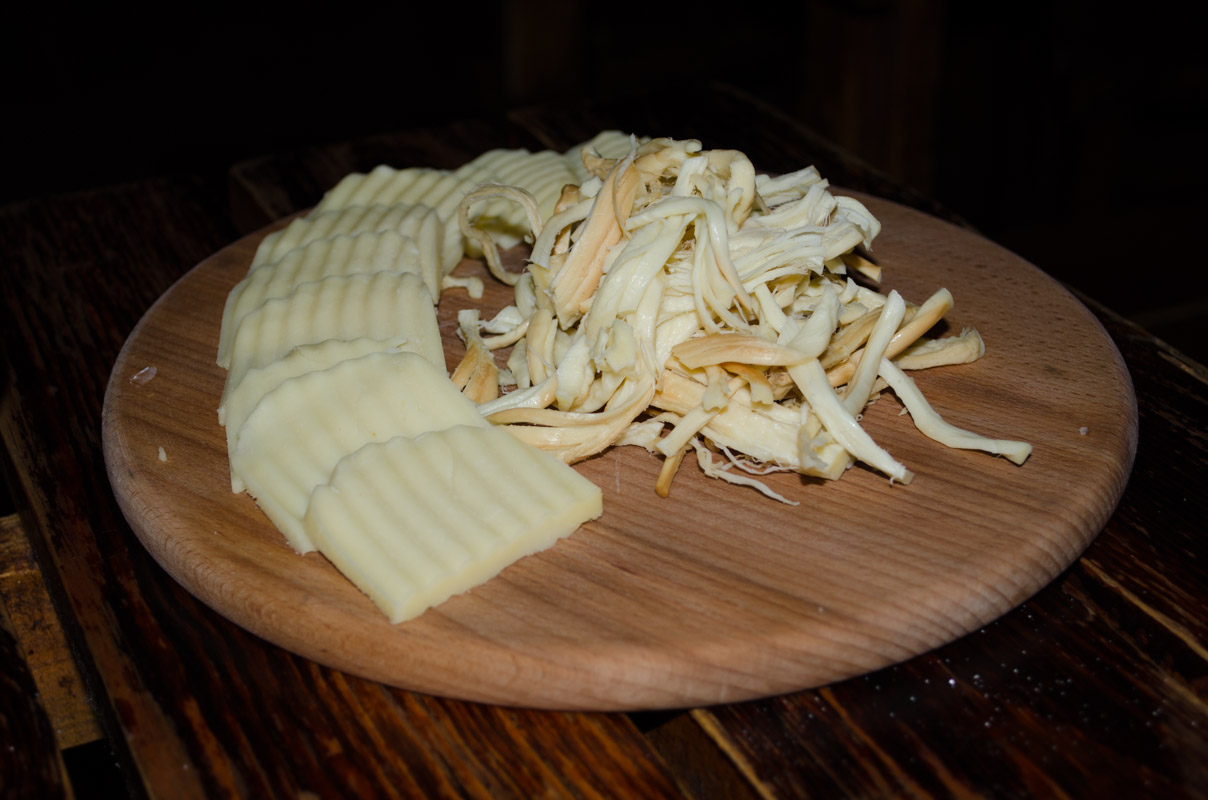 After our meal we wandered around some more and were surprised at how big the place was. We found some stairs heading up and came to an open-air bar in a courtyard with lots of military surplus and a giant art sculpture. 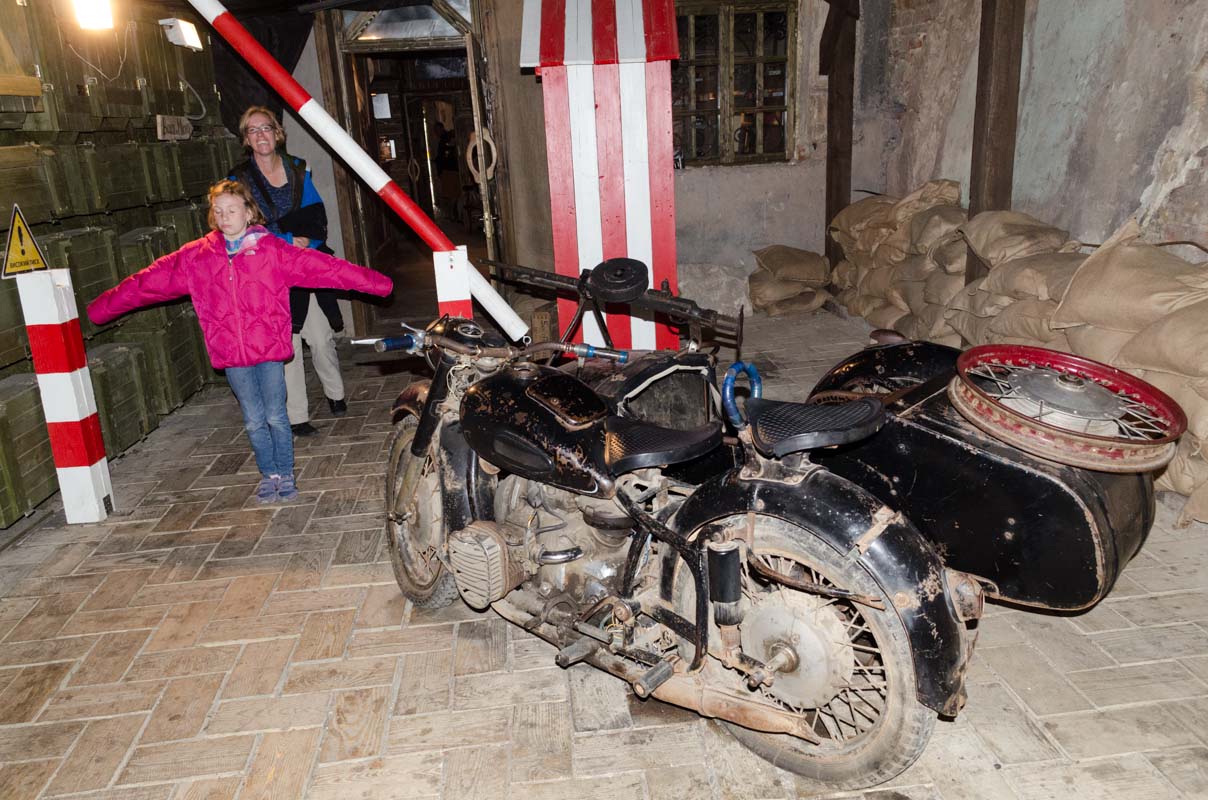 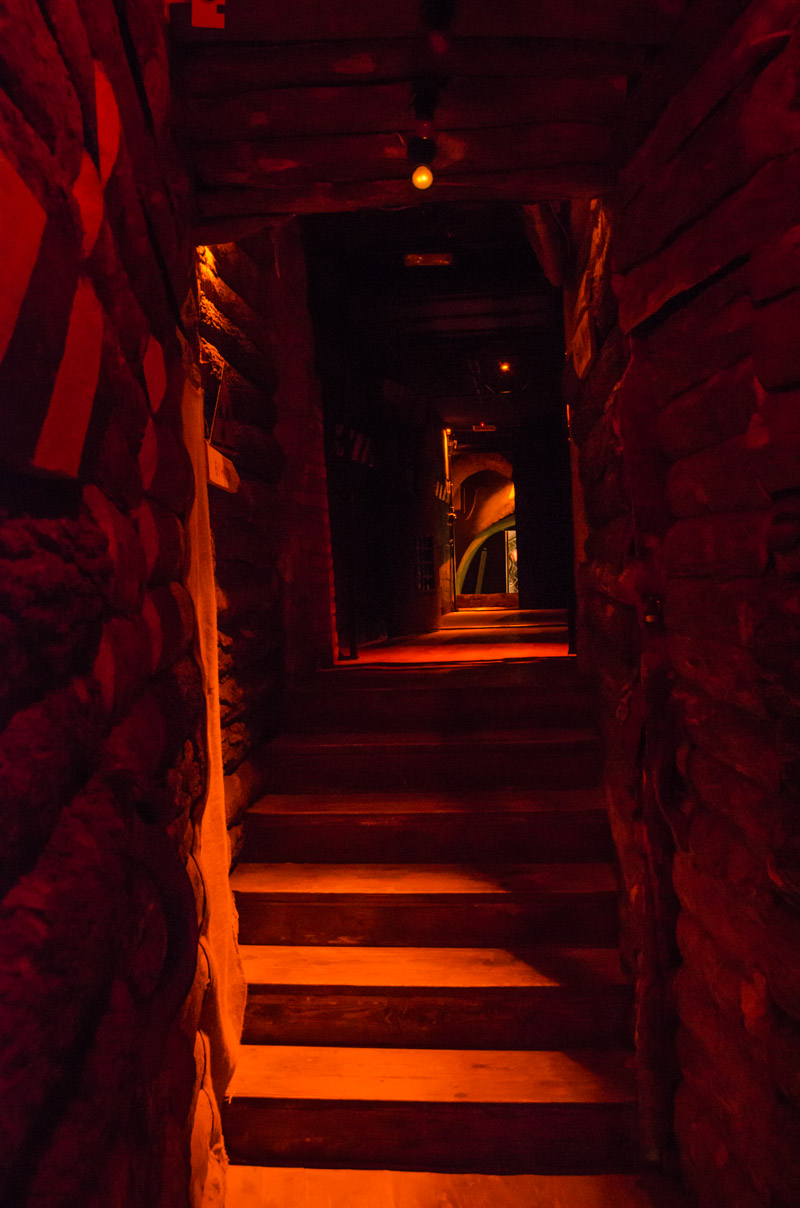 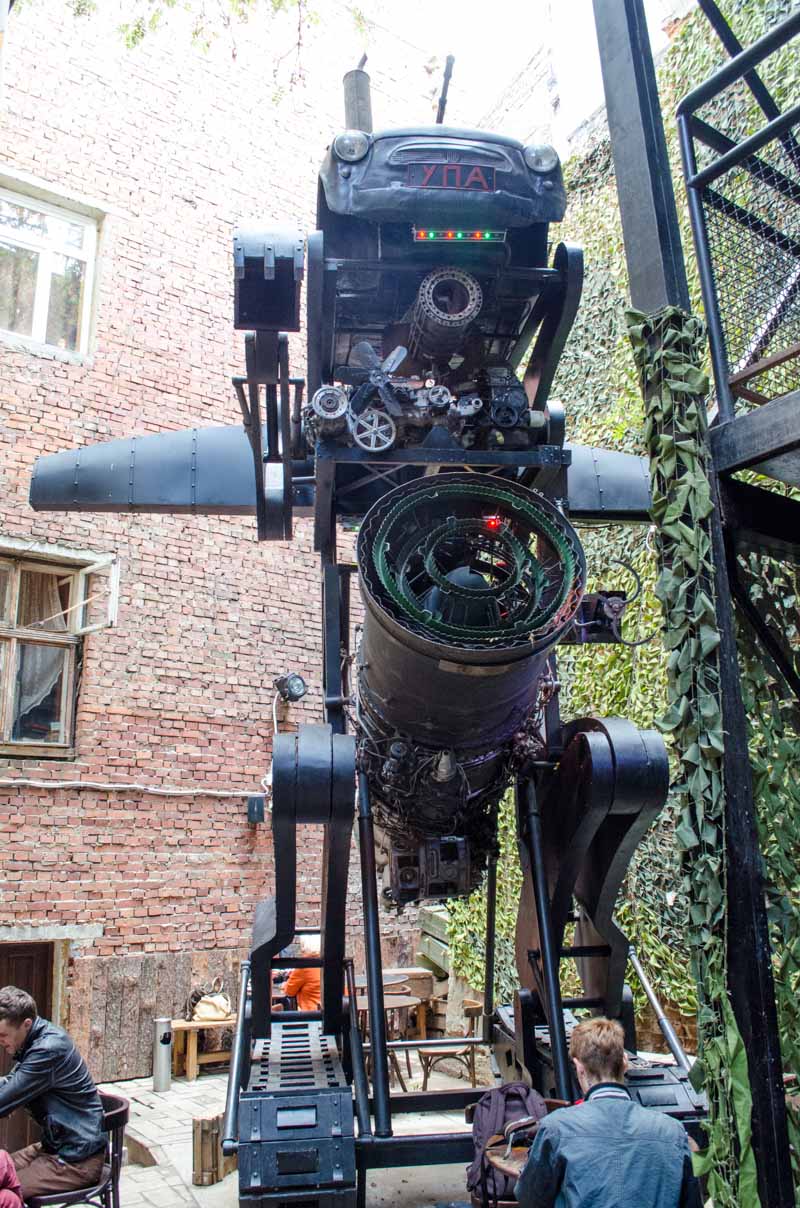 After walking past the bar we came across the guard with the fake machine gun and then made our way out.

The restaurant, Kryjivka, was formerly a bunker for guerilla insurgents during World War II fighting against the Nazis, and later the Poles and Soviets. It is located at 14 Rynok Square and is a must-see if you visit L’viv. And in case you do visit, the password to tell the guard to get into the restaurant is “Geroyam slava!” (“Glory to its heroes!”) or “Slava Ukraini!” (glory to Ukraine!”). The restaurant and bar is open 24/7 and is a great place to grab a bite to eat or a drink while checking out all of the cool stuff that they have on display.