Kuala Lumpur, Malaysia was one of those places that pleasantly surprised us.  Normally, we do not like big cities. This was especially true after four months of being in SE Asia and staying in some really, really big noisy cities.  But we actually really enjoyed our time in Kuala Lumpur and found the city to be very modern, clean with a great public transport within the city center.  We also loved the cultural diversity, which we had not seen the likes of in other SE Asia countries. We also loved how family friendly the city was.  Jason and I both agree that Kuala Lumpur is one of those cities that it is very easy being a tourist in, as practically everyone speaks English, signs are in English and it is very modern. We also found everyone to be really nice, friendly and helpful.  At the end of our month stay, it was bittersweet saying goodbye to a city that we had so enjoyed.  Here are some of the activities that we found during our stay in Kuala Lumpur.

There are many art galleries in Kuala Lumpur.  The two galleries we liked were the National Visual Art Gallery and Galleri Petronas.  Both are modern art galleries and are free to visit.  While the National Visual Art Gallery is a more difficult to reach by public transport, it is larger and the inside of the building itself is interesting.  At both galleries, we got to see some amazing art by Malay artists that we would have never seen if we had not gone.  The Galleri Petronas also offers art classes on the weekends for all ages at a very reasonable price.   During out stay, Sydney was able take two classes and absolutely loved it.  Unfortunately no pictures were allowed inside the galleries. 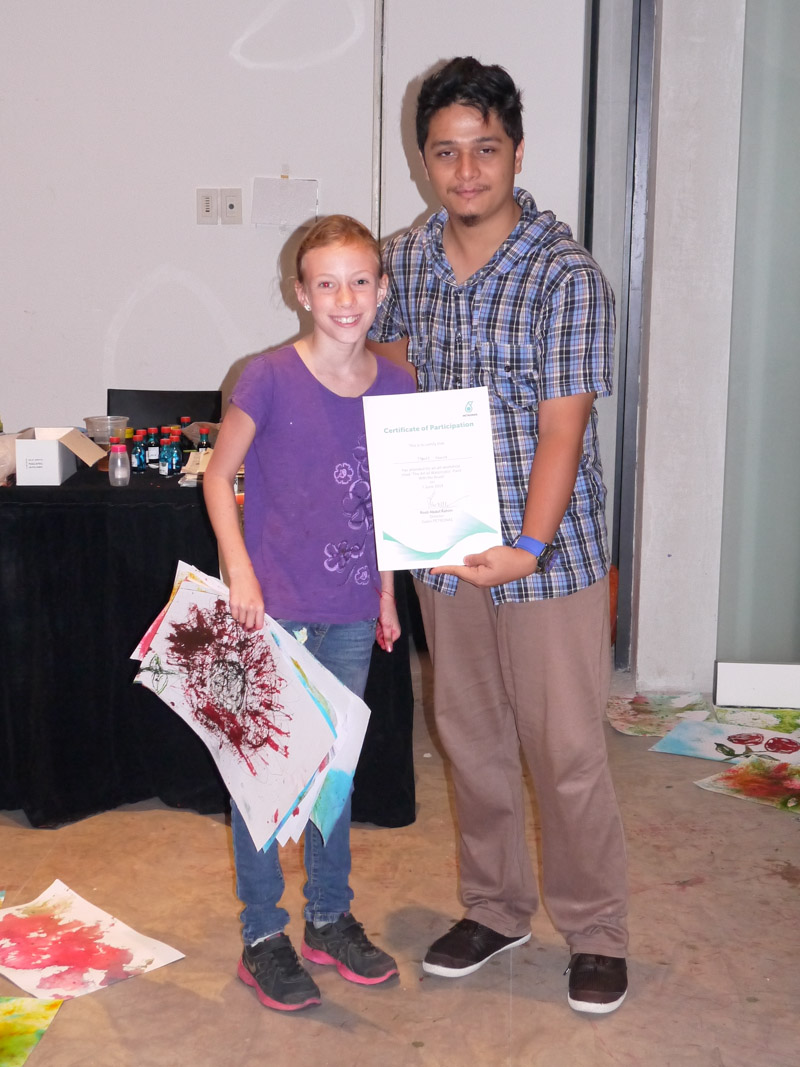 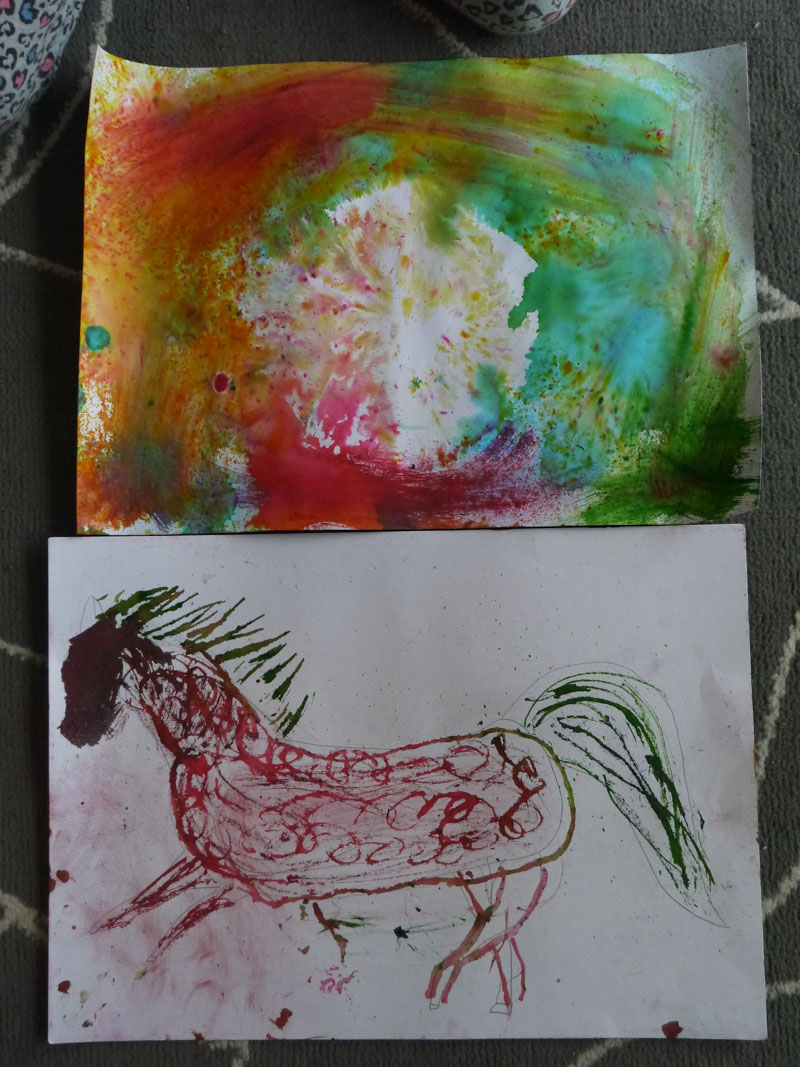 This is a gem that we nearly missed.  On the day we went to the National Planetarium, we were originally planning to do an outside activity.  Fortunately it began to pour and the rain did not look like it was going to let up.  We were trying to figure out what to do when we noticed the National Planetarium on the map and decided to give it a try.  I am so glad that we decided to do this.  The museum has tons of hands on exhibits that are in both Malay and English, including a mock up of the International Space Station and Soyuz space capsule.  Sydney got to see how astronauts go to the bathroom and sleep in space.  She even got try out sitting in a model of the Soyuz capsule.  And one of the best parts of the museum is that it’s free.  If you go, don’t miss going up to the observation tower, which has a great view of the city of Kuala Lumpur. 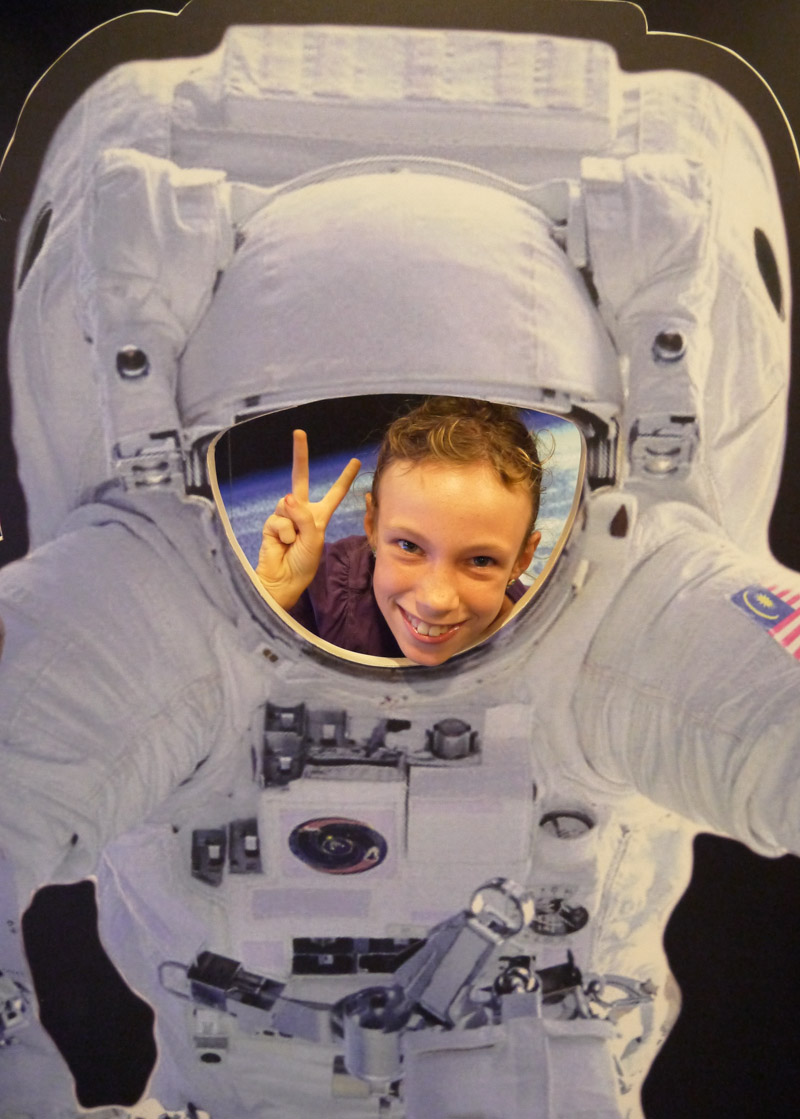 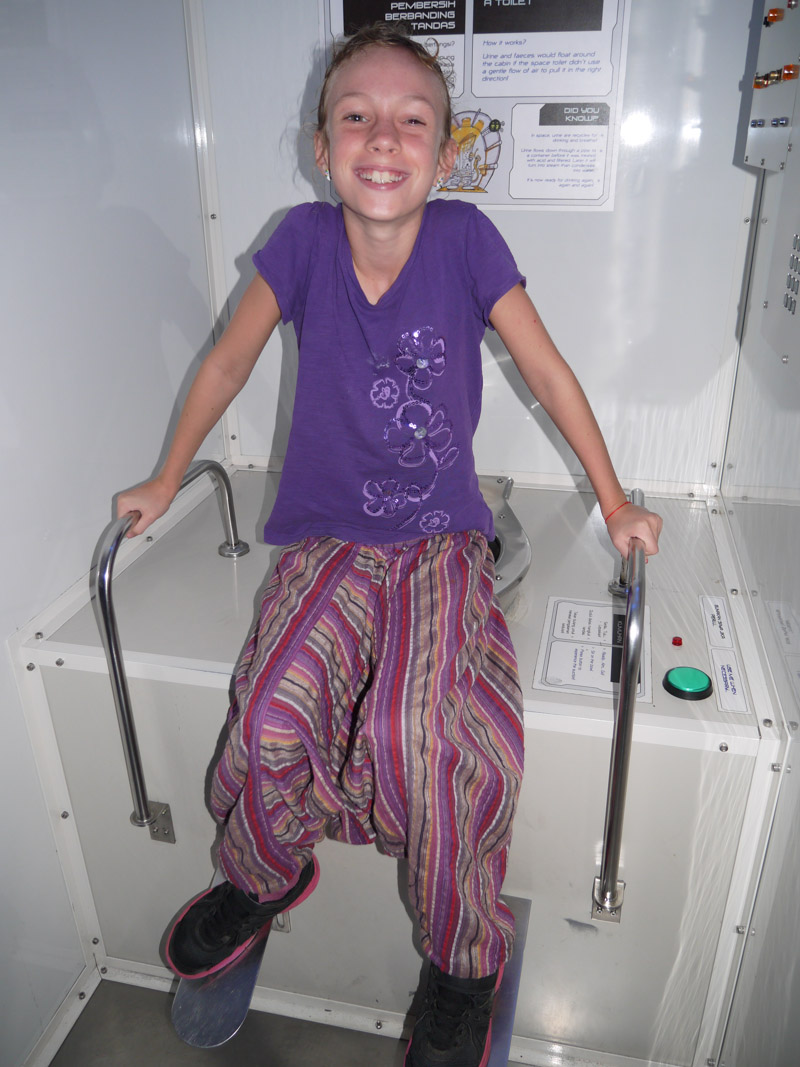 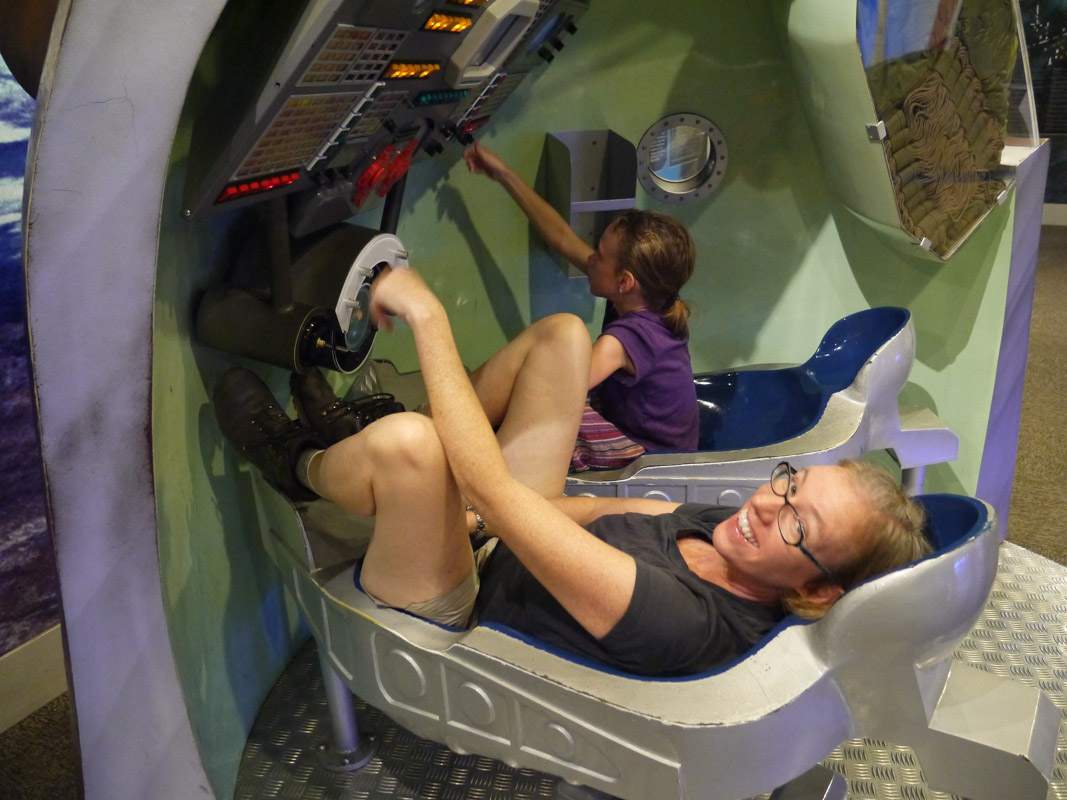 View of Kuala Lumpur from the observatory Part of the play structure at KLCC Park 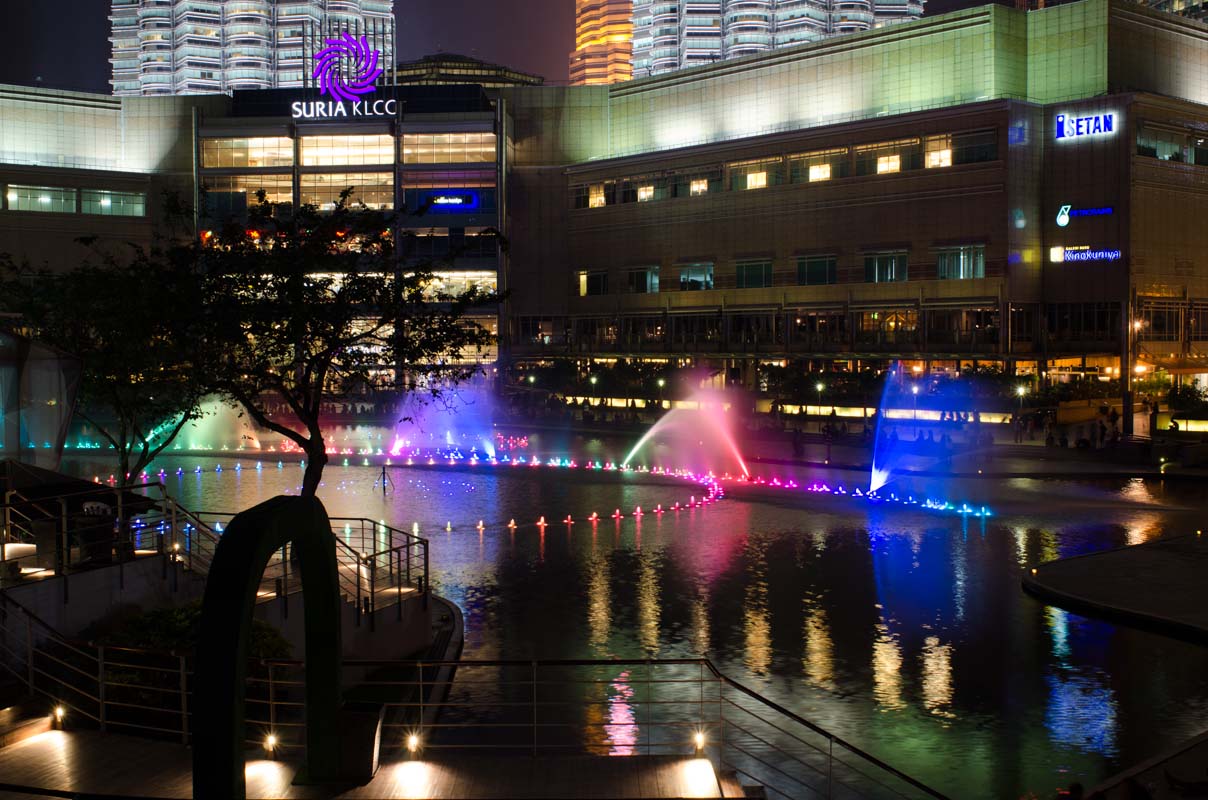 This is one of the more expensive activities we did while in Kuala Lumpur.  Despite the cost, I felt it was worth it.  KL Bird Park is one of the largest open-air aviaries in the world and while there we were able to see many beautiful tropical birds species from around Malaysia including the hornbill.  KL Bird Park has several feeding times through out the day, so be sure be there during one of the feeding times. For more pictures, check out Sydney’s Corner on the KL Bird Park. 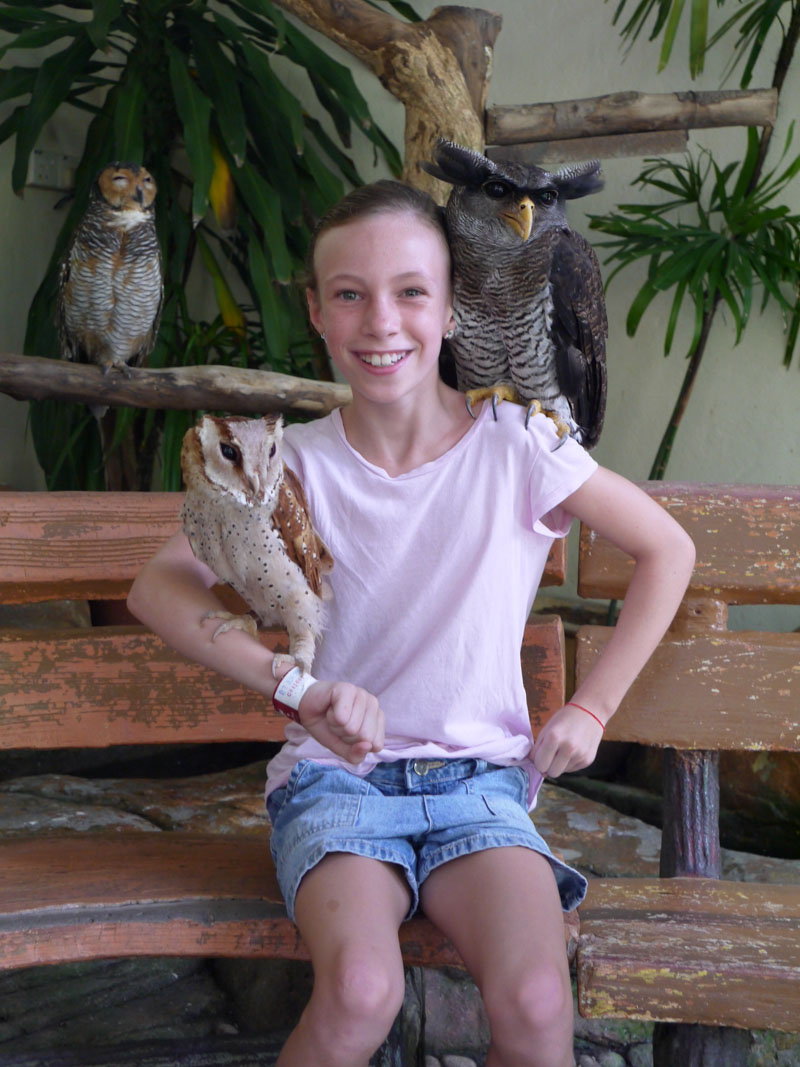 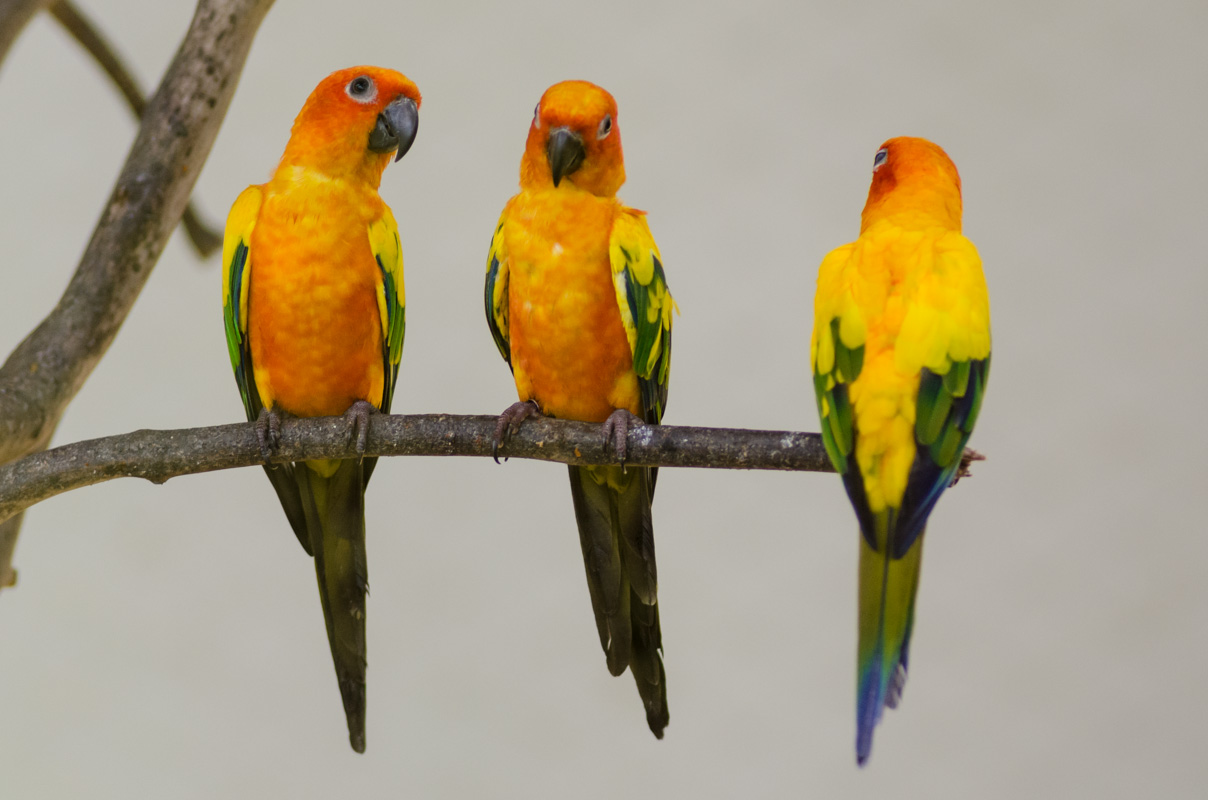 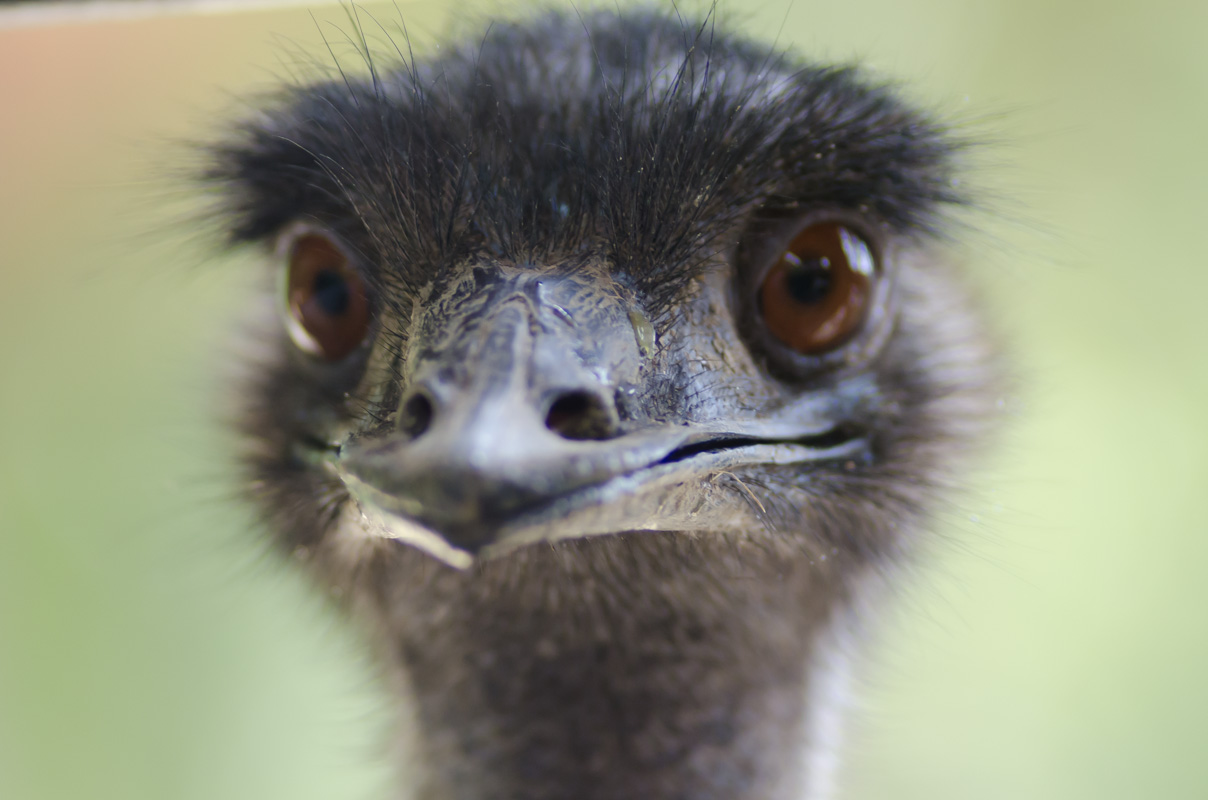 We found that the seeing a movie in the cinema in Kuala Lumpur to be incredibly cheap with prices as low as $7 for the 3 of us.  During our stay we went on a bit of a movie marathon, because they were just so cheap and we couldn’t resist.  Enjoying a movie can be a nice way to spend a down day and escape the heat.  There are several movie theaters in the city center including Suria KLCC and Pavilion mall.

Batu Caves is about an hour outside of Kuala Lumpur, but can be reached easily by public transport.  Batu caves are natural caves where Hindu temples and sculptures have been built.  We enjoyed seeing the difference in Hindu temples versus the Buddhist temples we had been seeing in much of other parts of SE Asia.  A word of warning: at Batu Caves there are also some very cheeky macaque monkeys. Don’t have any plastic bags out or the macaques will try to liberate them from you to check for foo 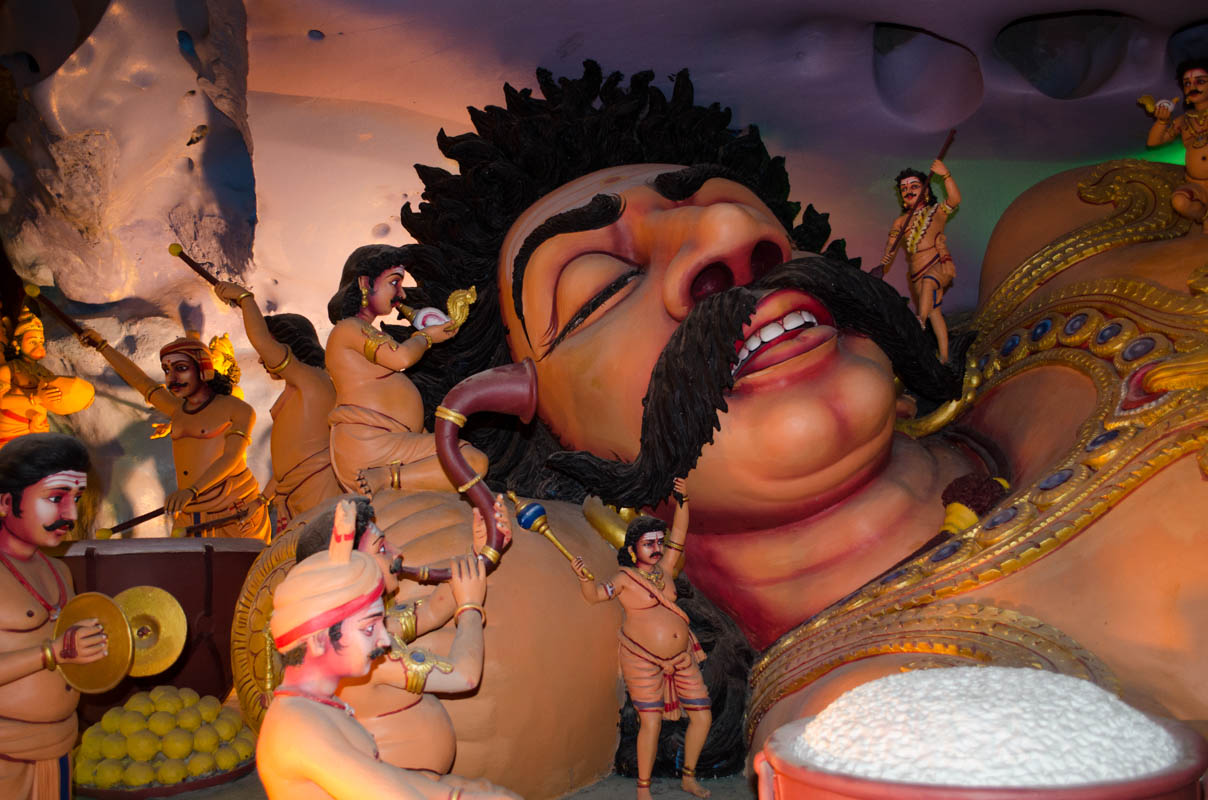 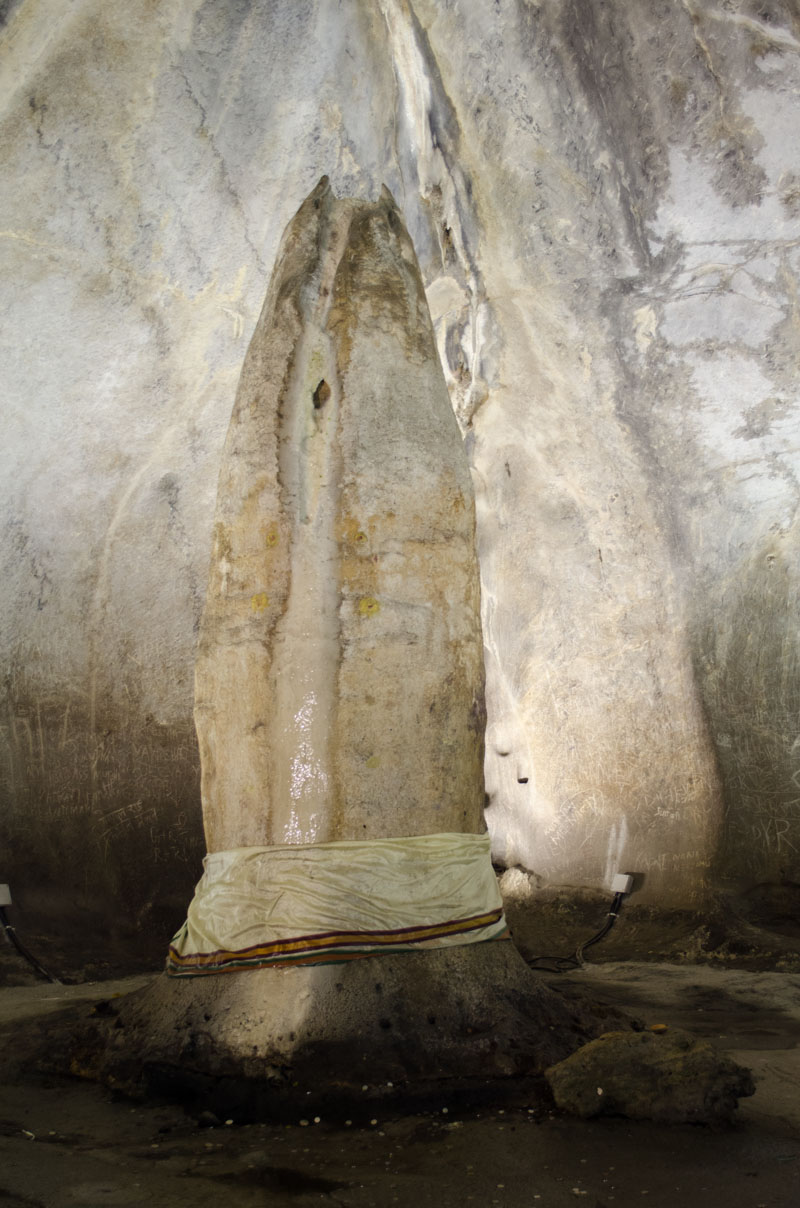 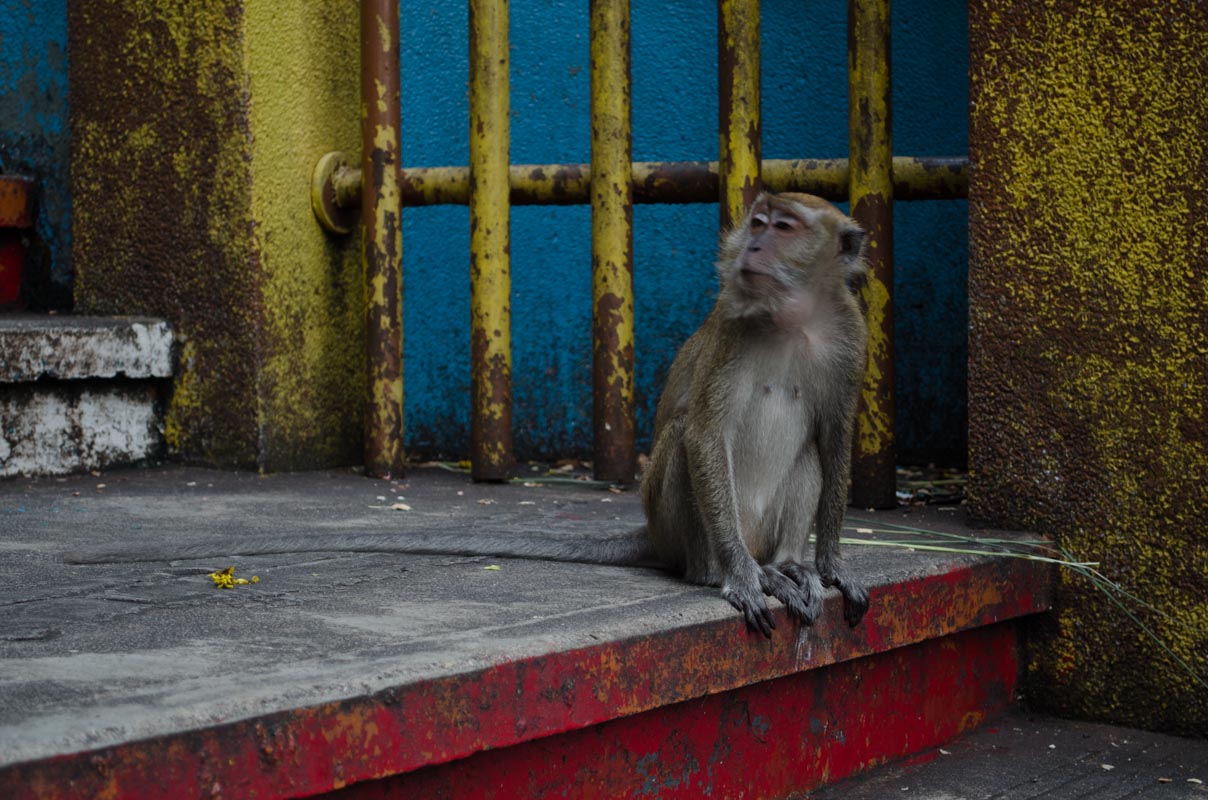 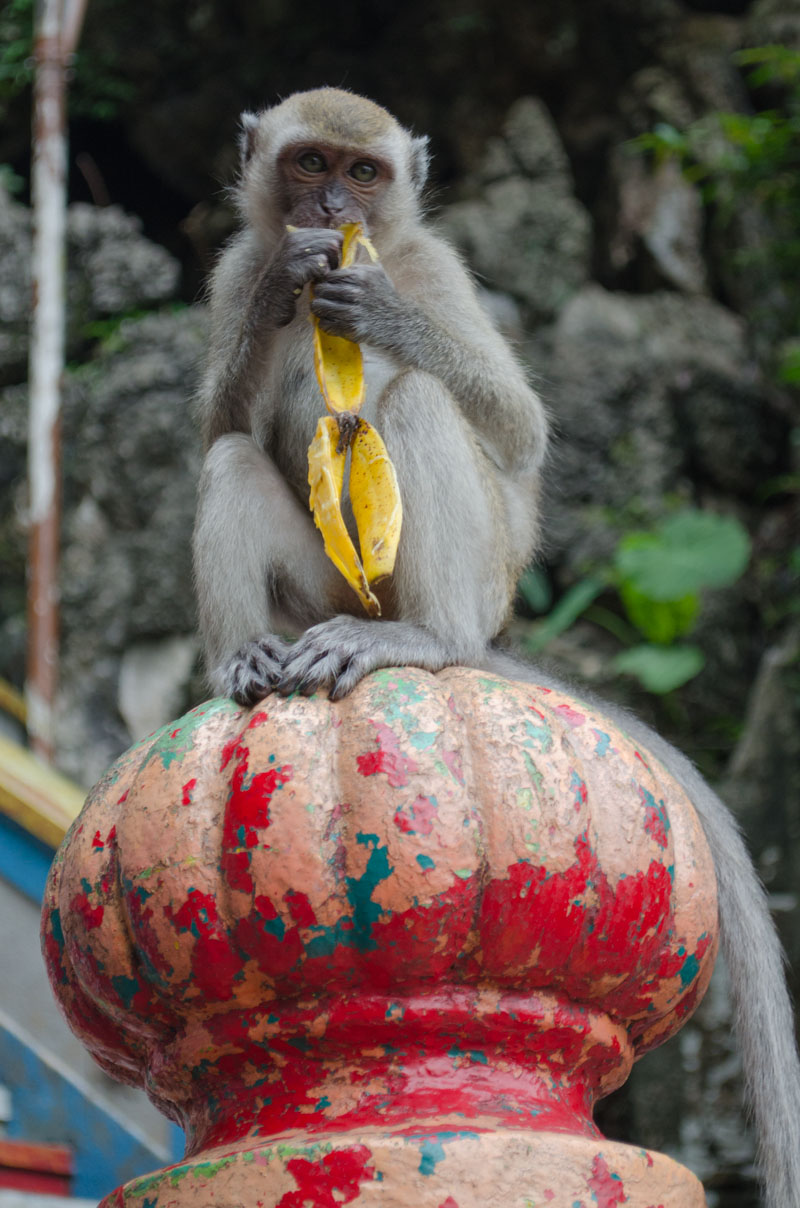 This was my favorite activity we did while in Kuala Lumpur.  The Forestry Research Institute is located outside of Kuala Lumpur and can be reached by public transport and then a short taxi ride.  The Forestry Research Institute is set in one of the few rainforests left around Kuala Lumpur and has a great canopy walk.  Although, it is not a long canopy walk it was still impressive walking through the rainforest tree canopy.  It made me realize just how far the tree canopy towers above the rainforest floor.  Be aware that the canopy walk closes during rain. Petrosains science museum is sponsored by the petroleum company Petronas so it definitely has an oil slant to it.  Despite this, the museum is still worth a visit and is huge with lots of hands on stuff including science experiments.  Sydney really enjoyed this museum and we actually ended up spending an entire day there.  Be sure to arrive early to avoid the crowds. We got to experience winds up to 126 KPH 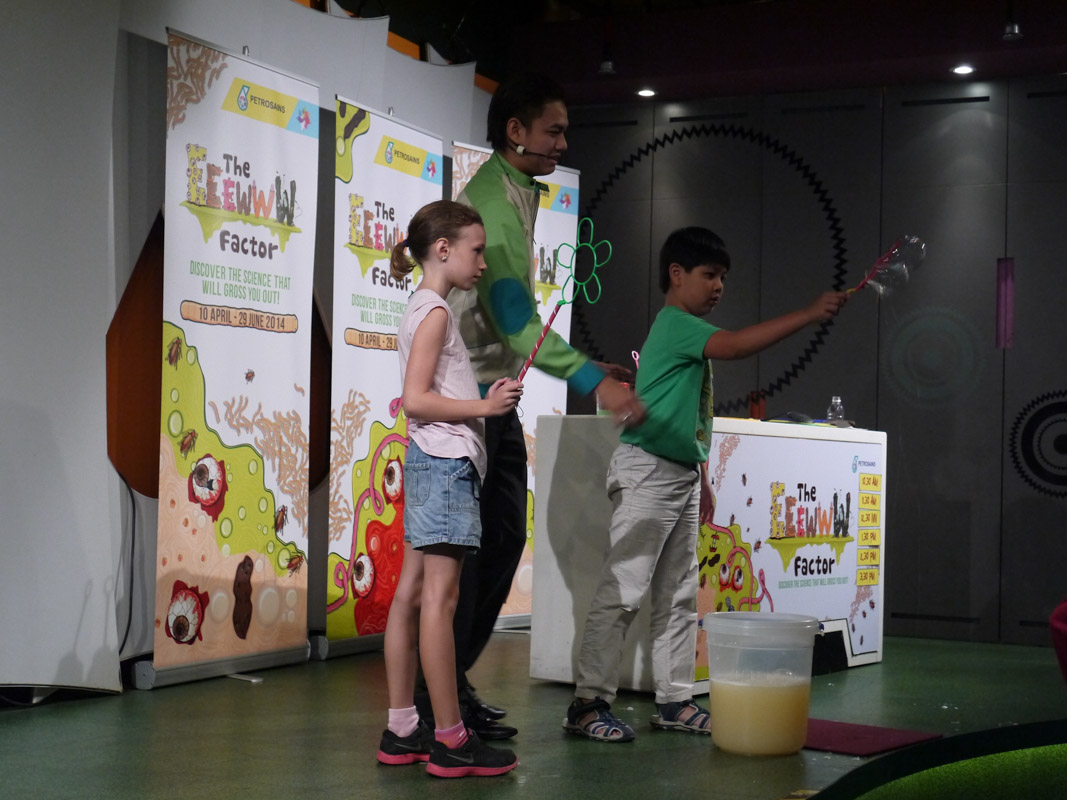 Sydney participating in a demonstration Dialogue in the Dark

I am a little hesitant to mention this one.  Not because Dialogue in the Dark wasn’t interesting, but because it is now located outside of Kuala Lumpur in Senlanger and you would need your own transportation.  Dialogue in the Dark is an exhibition to show what it would be like to be blind.  We were taken through several every day scenarios such as going through a market, using an ATM, navigating streets and even purchasing a drink at a coffee shop.  All of these activities were done in the pitch black.  It was an eye-opening experience for me and helped me appreciate how difficult “simple” tasks can become when you are blind.  At the end we had a good conversation with our guide and it made me realize how life is really not about the obstacles, but how we choose to handle those obstacles and whether we turn those obstacles into barriers or hurdles.  For more information, check out Jason’s blog about Dialogue in the Dark. 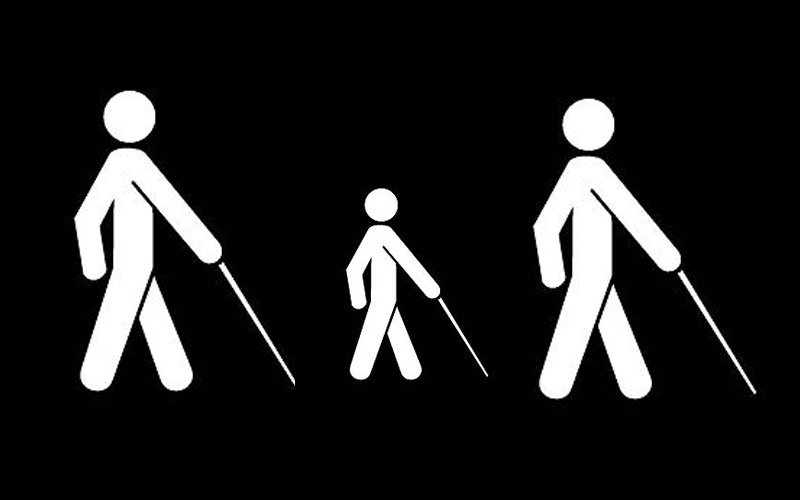 I hope this gives you some good ideas of what to do the next time you are in Kuala Lumpur.  I also hope that you love the city as much as we did.