Before we started our around the world trip we asked our daughter, Sydney, where in the world she wanted to go. Without pause, she said Sydney, Australia. Sydney, the city not our daughter, is renown for being one of the most expensive cities in the world to visit and can easily wreak havoc with anyone’s budget. After looking at costs of accommodations and other peoples budgets we were very nervous about how much it would cost and even considered skipping it. But after much discussion we decided we just couldn’t skip Sydney, as this was on the top of our daughter’s list of must see places. So, we decided to limit our time to only 3 nights and set a budget of $200 per day. So how did we do? Thanks to our friends Jane and Duncan from To Travel Too, we were able to come in under budget for a total of $429.18 USD. They gave us lots of great ideas of cheap and free ways to see the beautiful city of Sydney and still have fun. When we first looked at lodging in Sydney it was a bit of a shock and found it very difficult to find accommodations in the city center for the three of us for less than $100 per night. Even accommodations outside the city center were around $100. After much searching, we were able to find our hotel for $286.92 USD for three nights. We choose our hotel, the Lido, because it had a mini kitchenette with fridge and microwave and was in a good location within walking distance to many of the sites. Having a kitchenette in our room helped keep our food costs down, as we were able to prepare our own food. Also being within walking distance to the sites helped us save money on transportation, as public transport in Sydney is not the cheapest. The Lido was definitely located in one of the more “colorful” areas of Sydney, aka the red light district, but we found it to be safe and it kept things interesting.

On our first full day in Sydney we woke up to rain. As it turned out, we happened to visit Sydney during the heaviest rainfall in 16 years. Being undeterred, we set off with a borrowed umbrella from our hotel to explore the city and we’re able to stay mostly dry. We had initially planned to take the free walking tour of Sydney, however we misread the schedule and didn’t make it to the meeting point on time. So instead we decided to do our own walking tour. From the park we headed towards the Royal Botanical Garden and the Sydney Opera House. Near the entrance of the Royal Botanical Garden, we noticed the Art Gallery of NSW. Curious we stepped in to see about the cost. As it turned out, the museum is free and even has a few paintings from well-known artists such as Picasso and Van Gough. It also contains art by Australian artists, Aboriginal art, and offers some beautiful views of the harbor. We really enjoyed wandering around the museum. After visiting, I realized that the Art Gallery of NSW offers children activities to help make the gallery more engaging for children. The activities, called children’s trails, can either be printed before visiting or picked up at the help desk. The museum also offers free performances for children on Sundays. 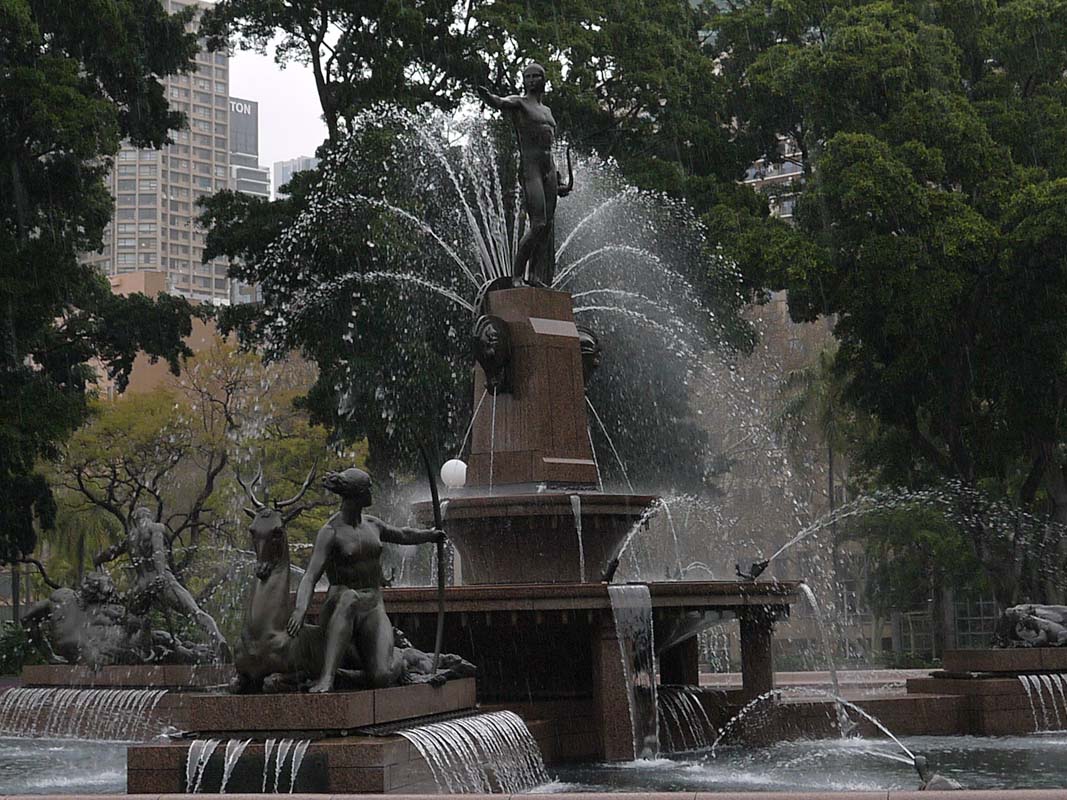 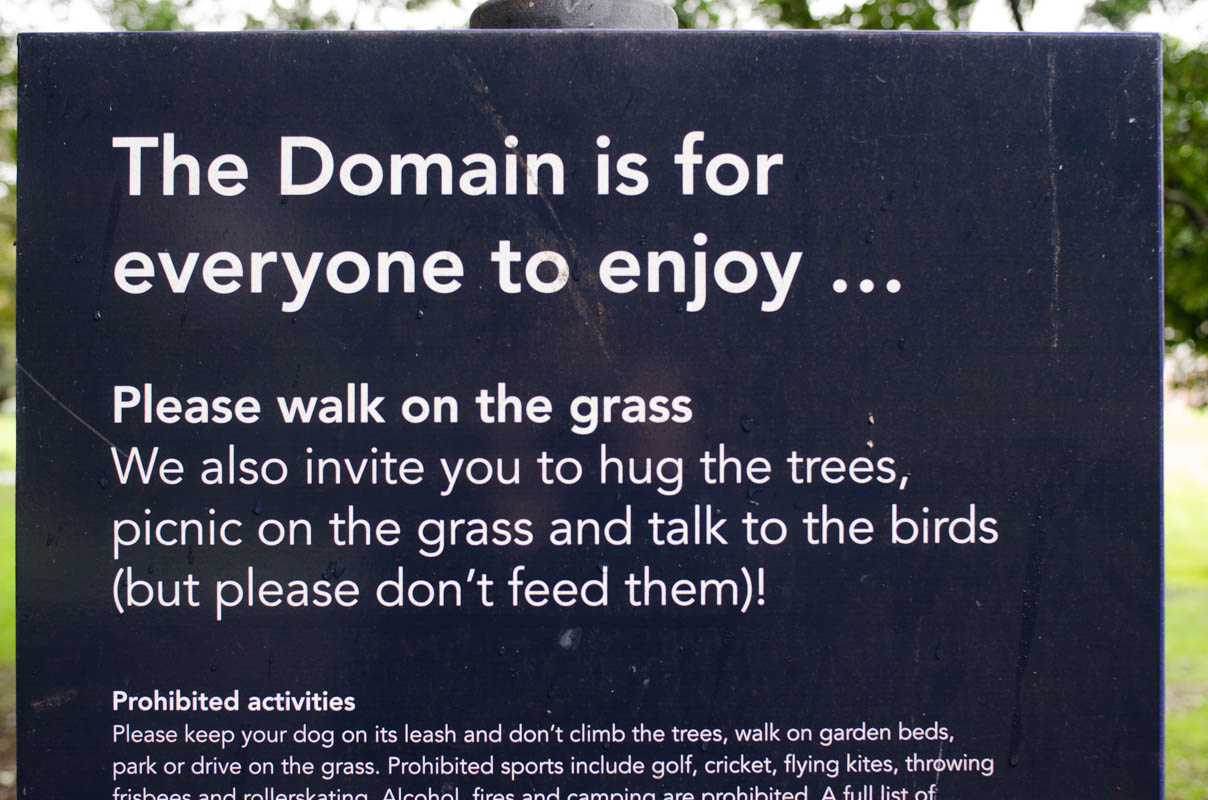 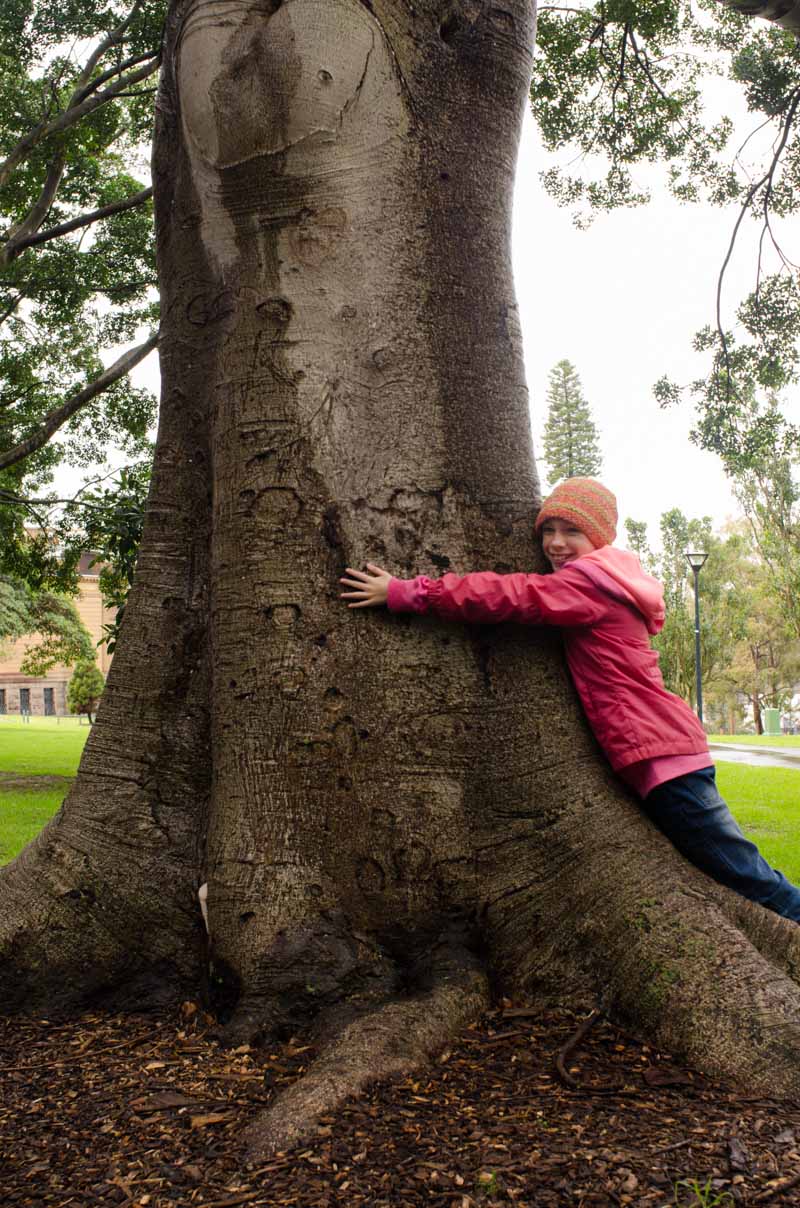 Trees are to be hugged 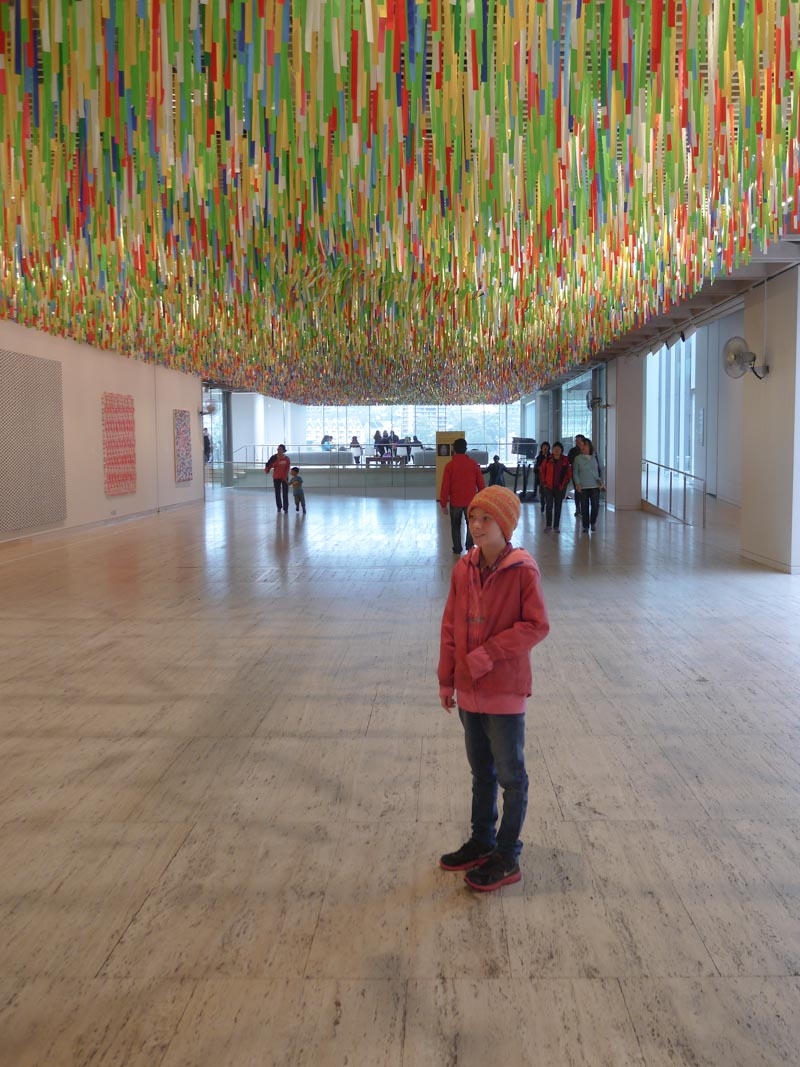 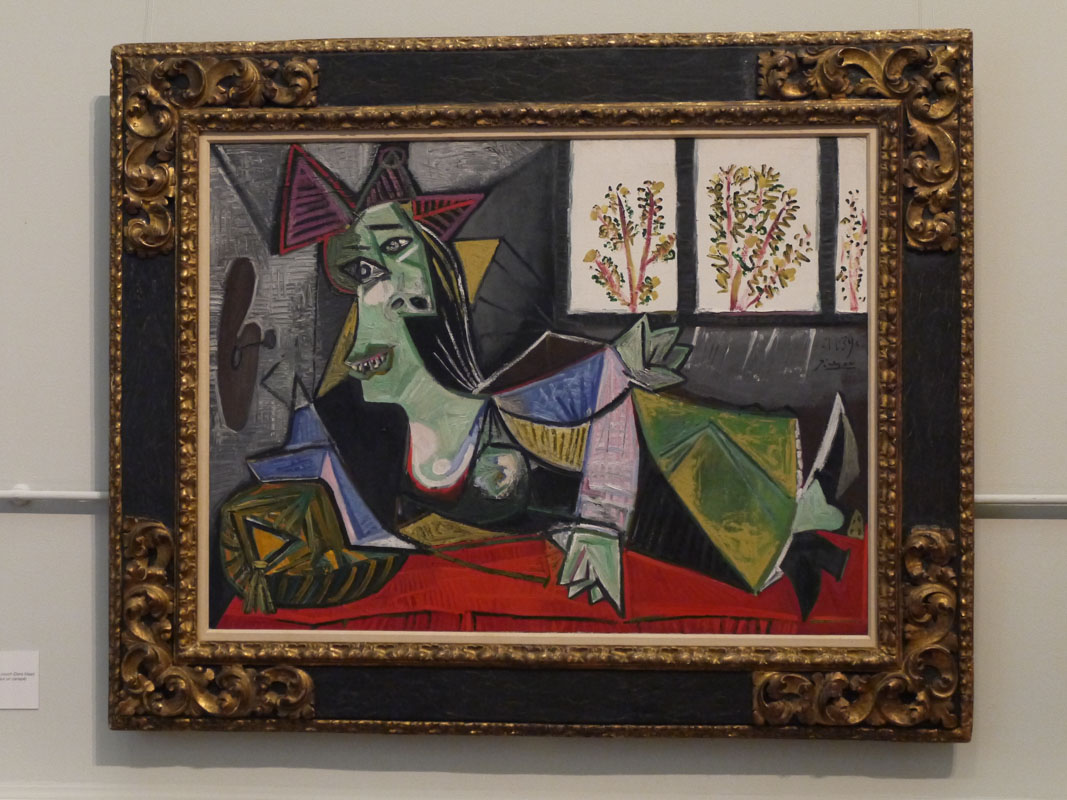 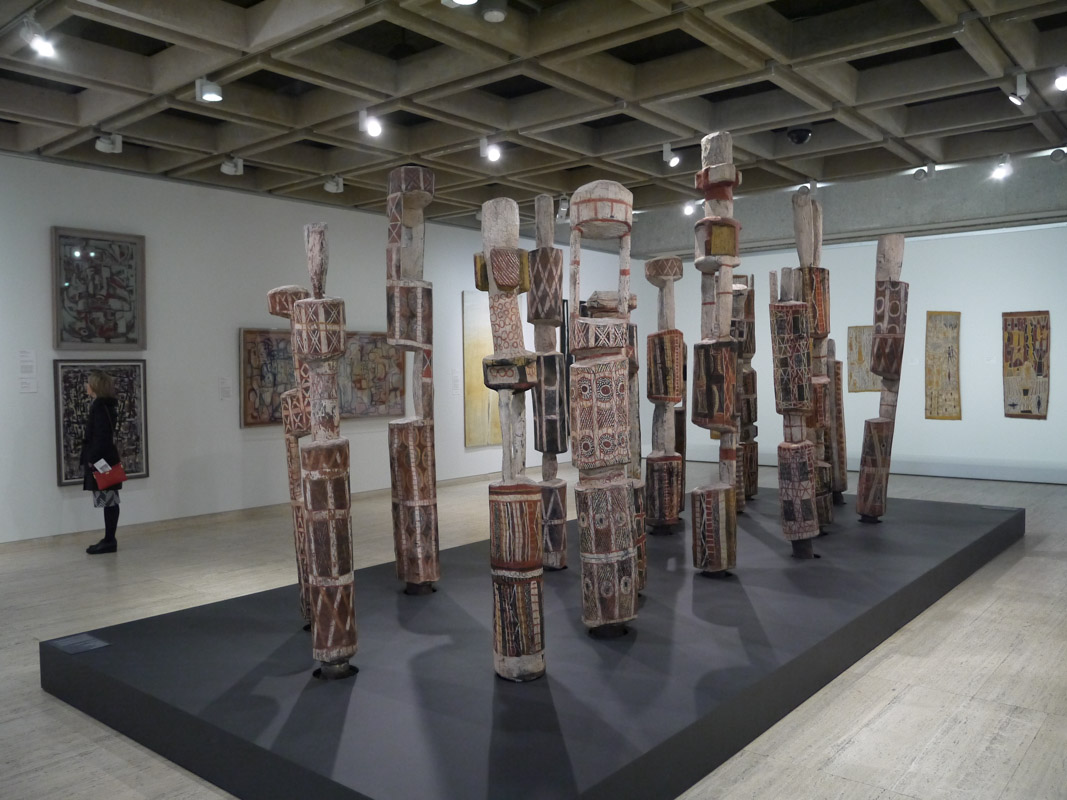 After wandering around the Art Gallery of NSW, we strolled through the Botanical Garden slowly making our way to the Sydney Opera House. Strolling through the Botanical garden gave us beautiful views of the harbor and we enjoyed seeing some of the birds that are native to Australia such as the sulphur-crested cockatoo and great ibis. As we walked the famous Sydney Opera house slowly came into view. Once we arrived, we marveled at seeing one of the best-known works of architecture in the world and we of course had to take some cheesy photos. We also enjoyed admiring the view of the Harbor Bridge and Luna Park from the Opera House. We then walked over to the Rocks, the area of the first European settlement in Australia. Around the Rocks many historic buildings can still be seen and offers a great view of the Sydney Opera House from a different angle. From there we thought about walking across the Harbor Bridge. Walking across the Harbor Bridge is free and is a great way to save money instead paying big bucks to climb it. However we decided against it, as it began to really pour rain. We instead returned to the hotel to relax and watch movies. 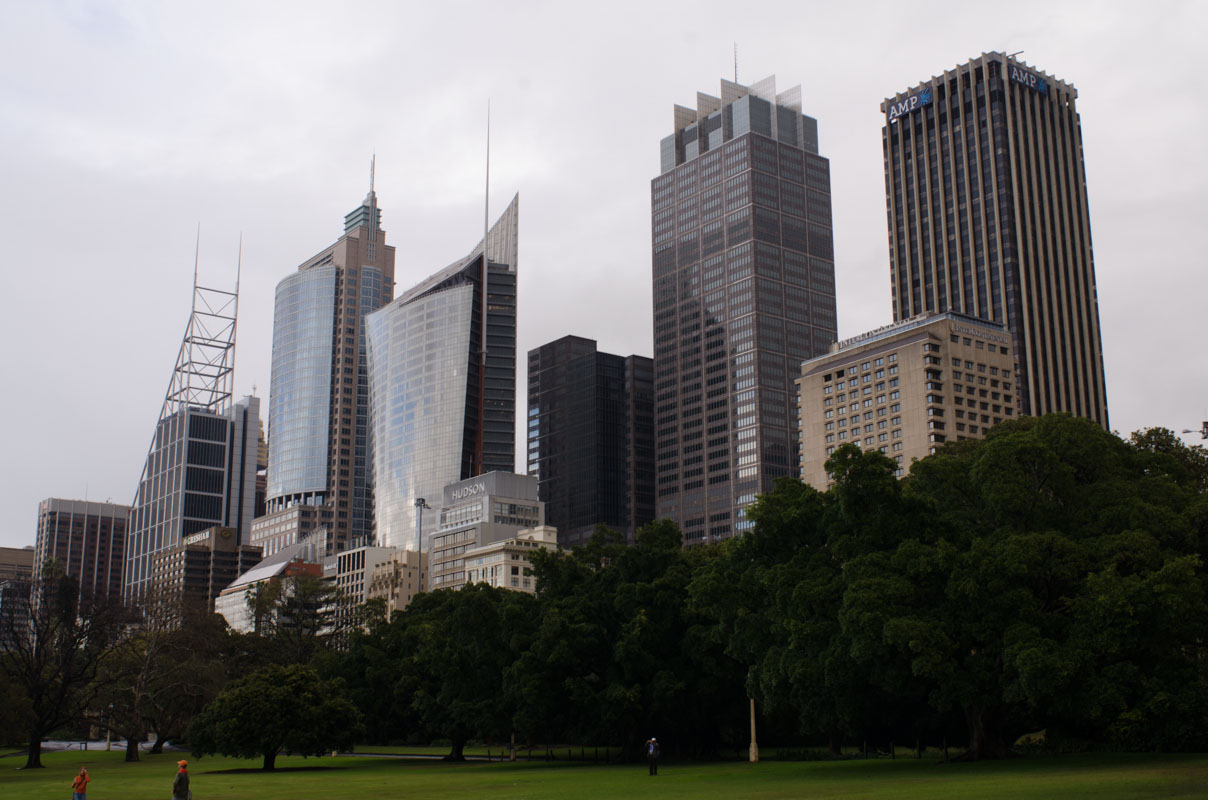 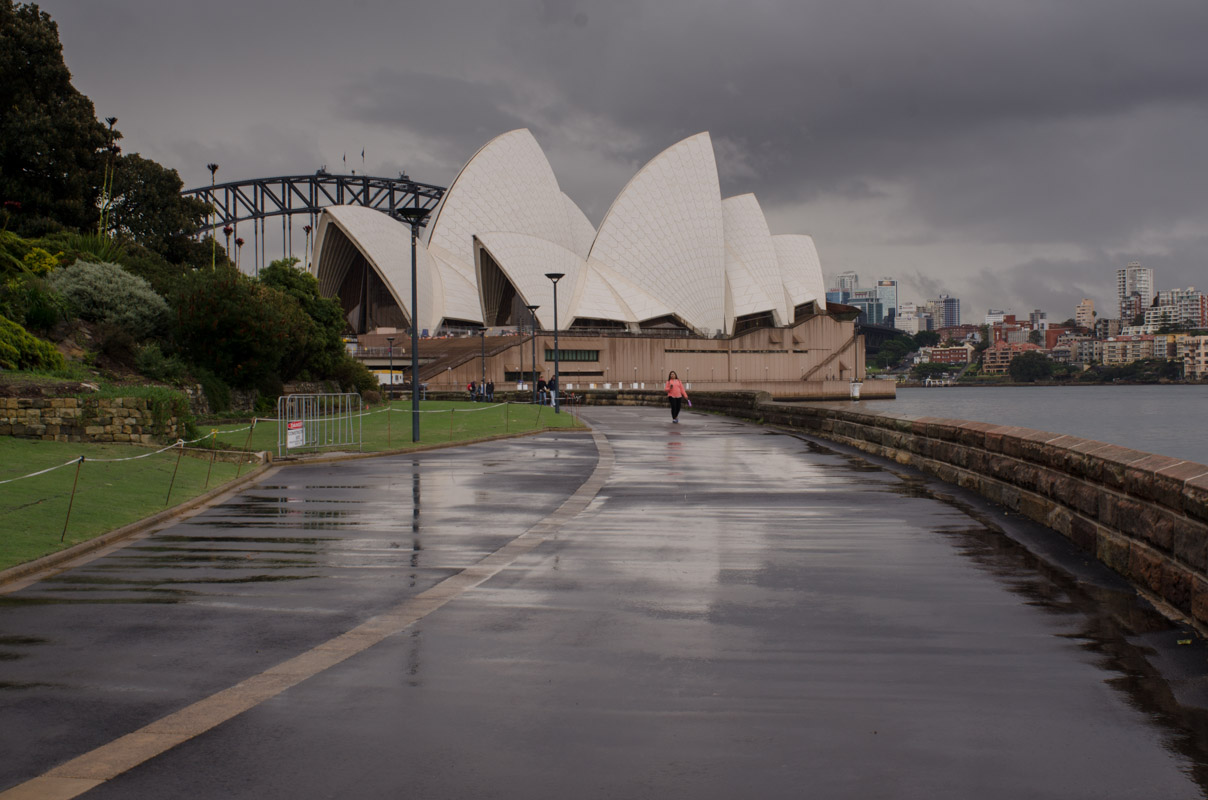 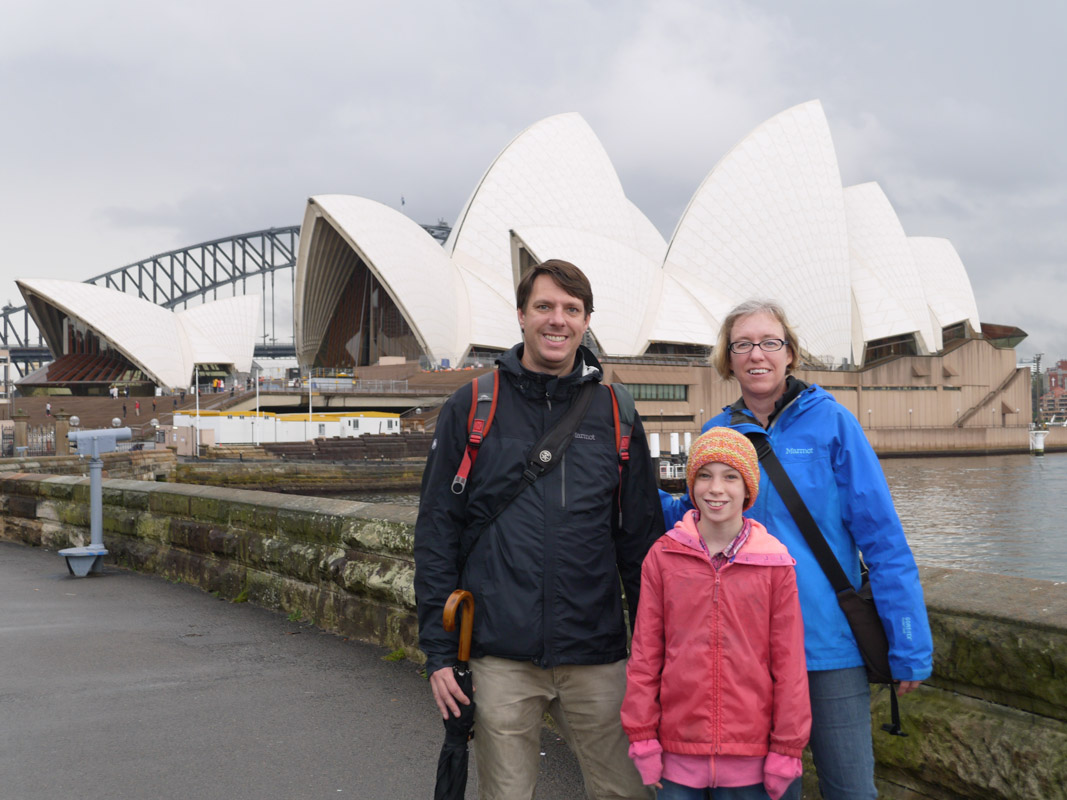 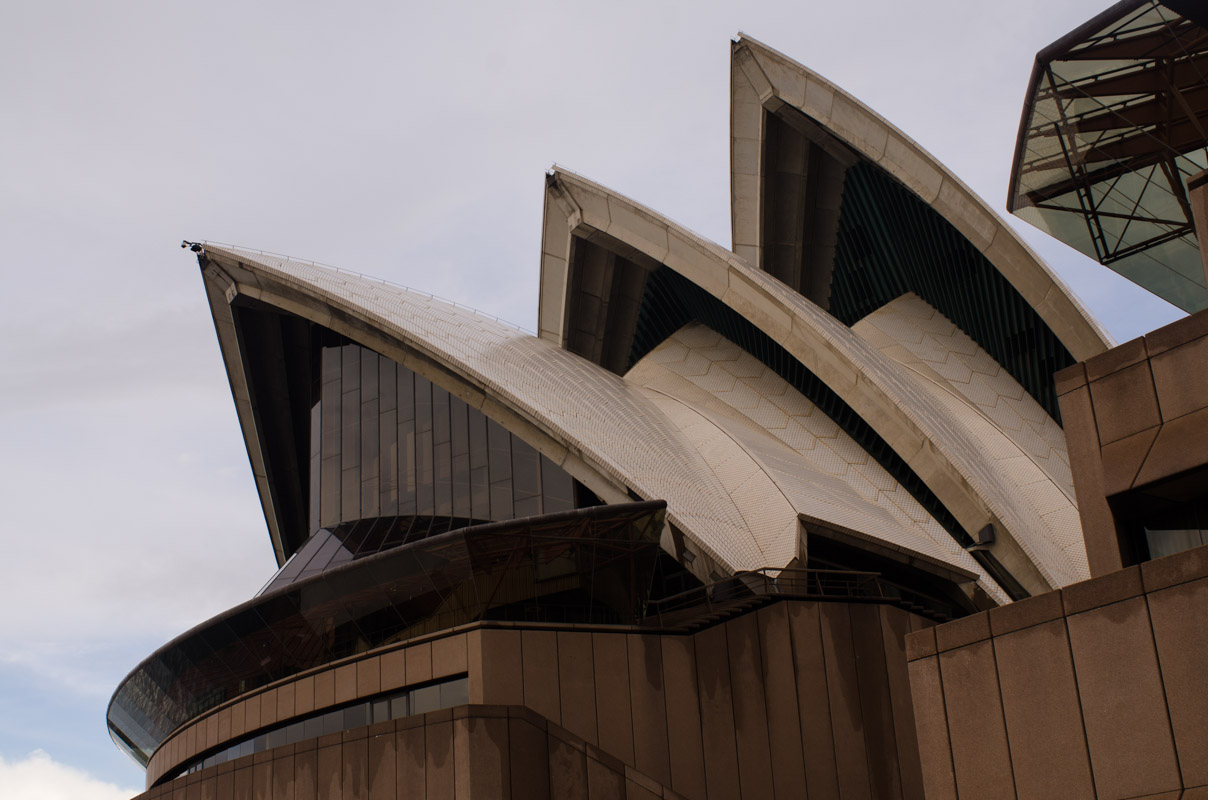 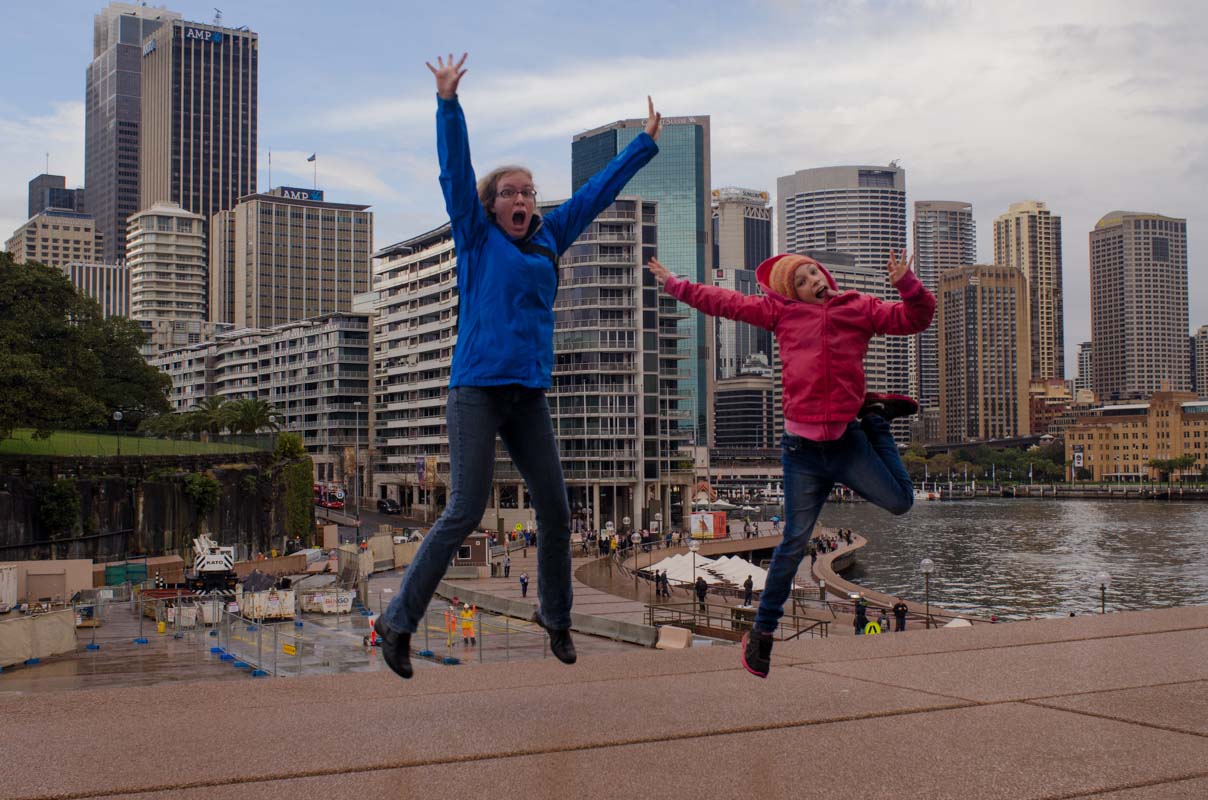 Jumping for joy to see the Opera House 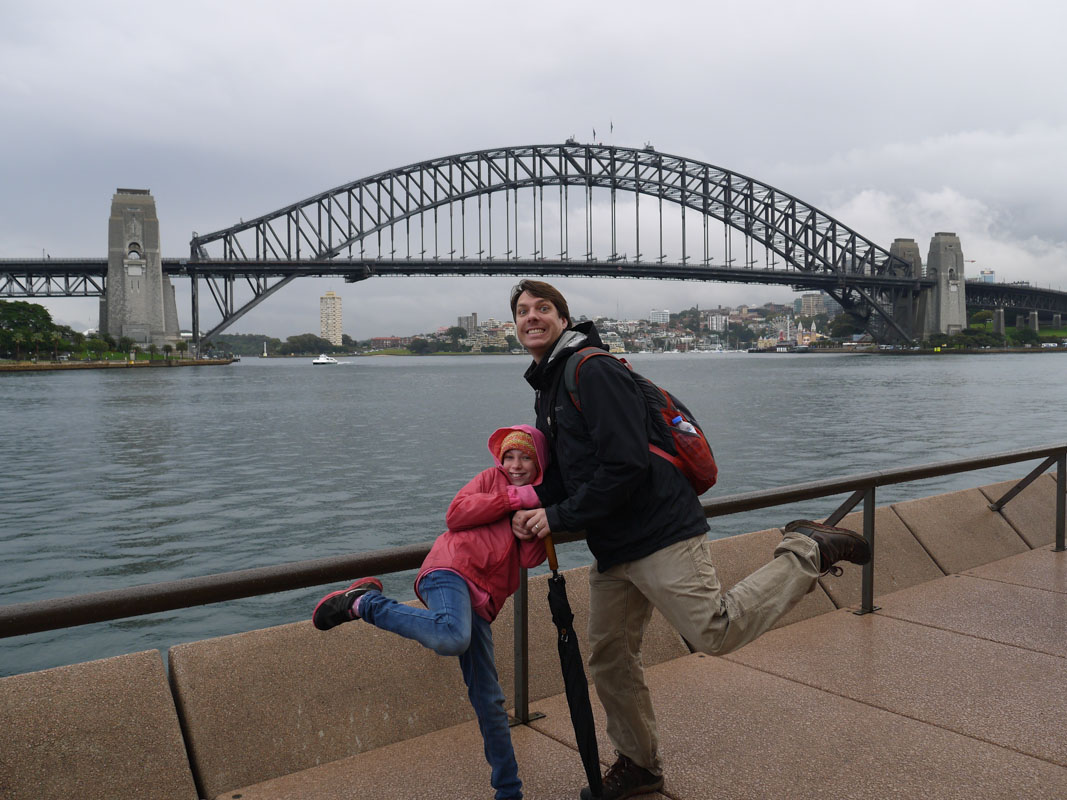 The next day we met up with our good friends Jane and Duncan in Manly. We took the commuter ferry to Manly from the Circular Quay costing a total of $14.40 for the three of us. Taking the commuter ferry allowed us to see the city from the water without paying a lot of money for the tourist boat. The Sydney Opera House and Harbor Bridge looked even more impressive from the water and was well worth the cost. In Manly, Jane and Duncan took us on a walking tour showing us the beautiful beach of Manly and the pedestrian friendly city center. Just as a side note, the famous Manly beach is not the tiny beach next to the ferry. Jane and Duncan also took us on the Cabbage Bay Eco Sculpture walk that goes along the coastline towards Cabbage Bay. As we walked along the path we had fun searching for the sculptures of marine life, plant life and animals of the area. While walking we also stopped for a coffee near Fairy Bower Baths and enjoyed watching the sea crash against the sea wall. Manly is definitely one of those places that we could have easily spent the entire day or even several days playing on the beach, walking the many of trails in the area, and hanging out in the pedestrian friendly city center. 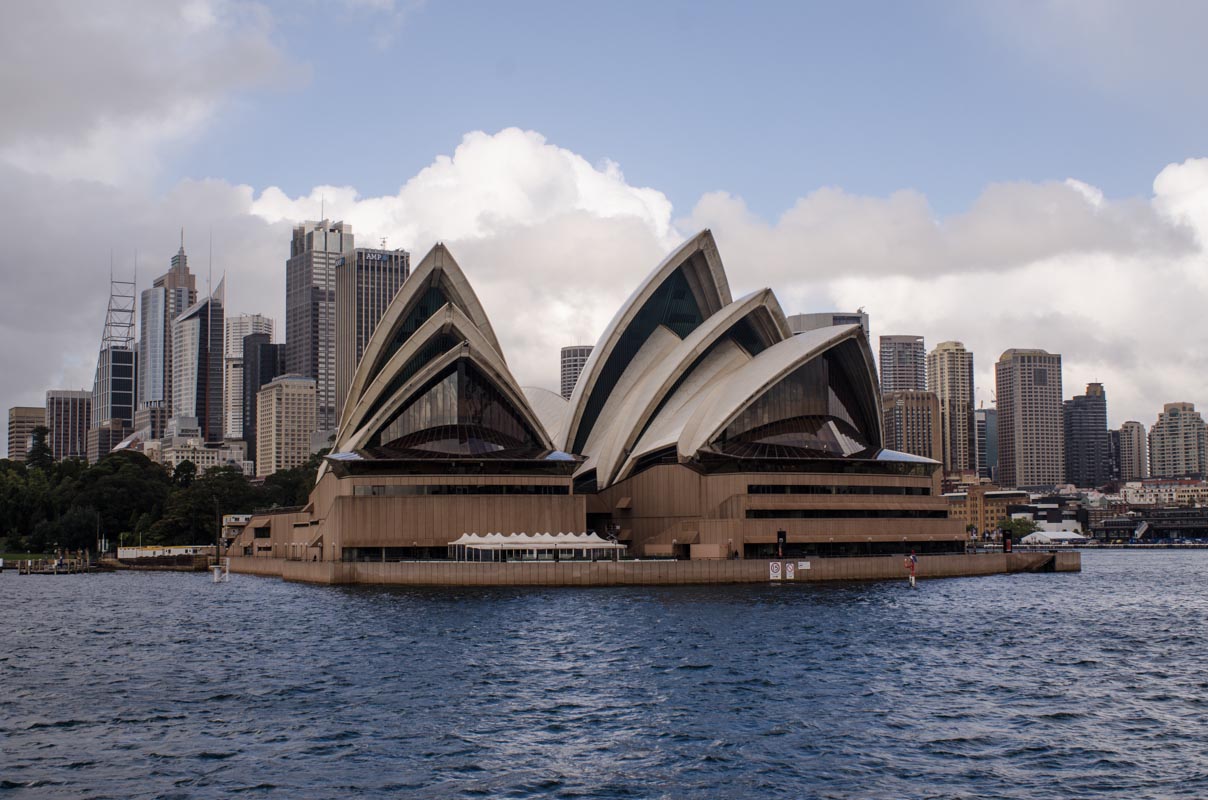 View of the Opera House 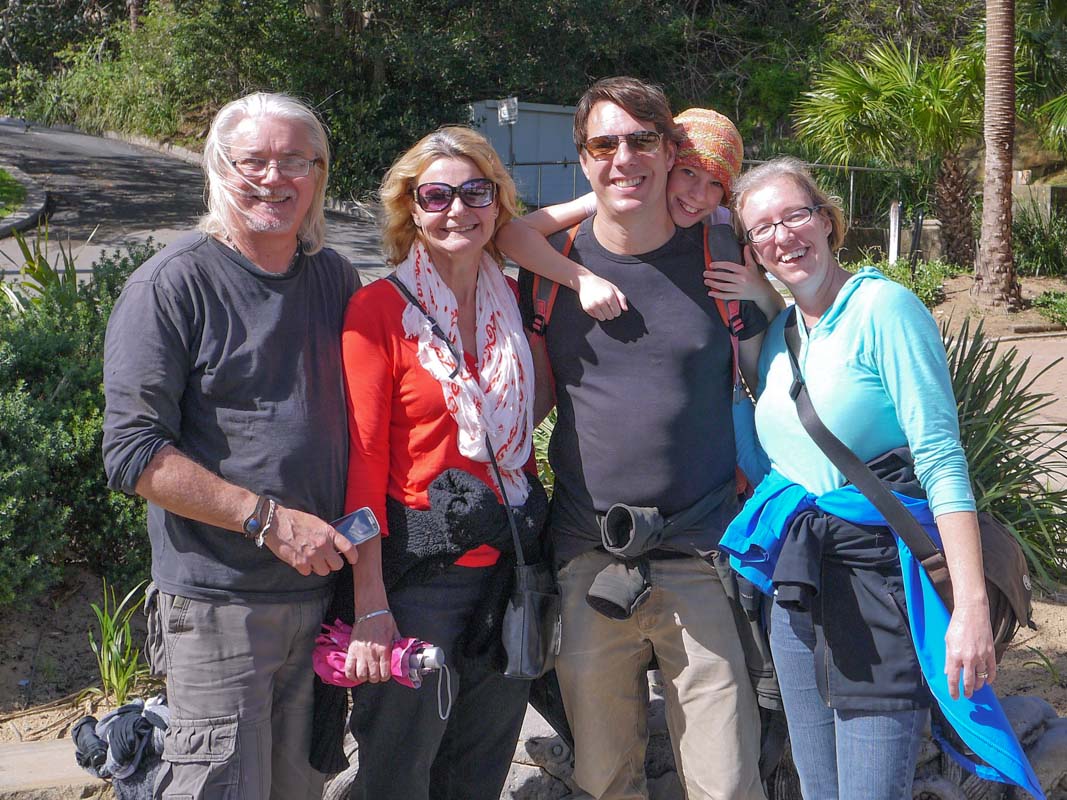 Our friend Jane and Duncan 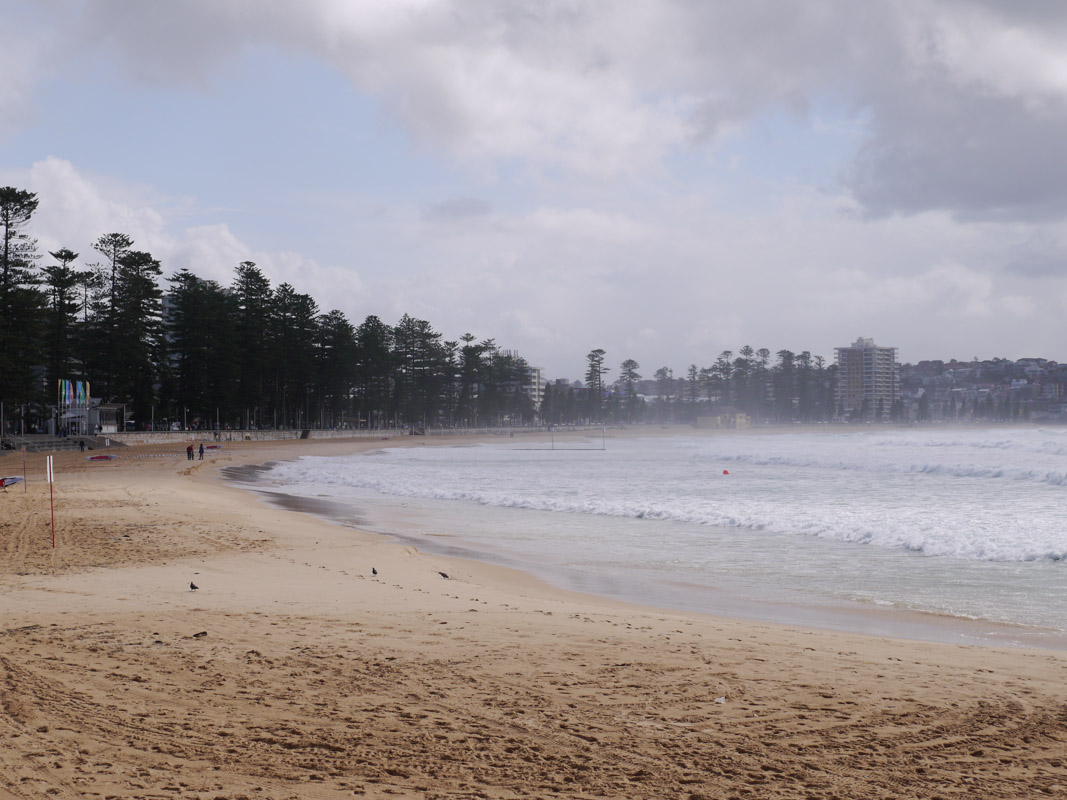 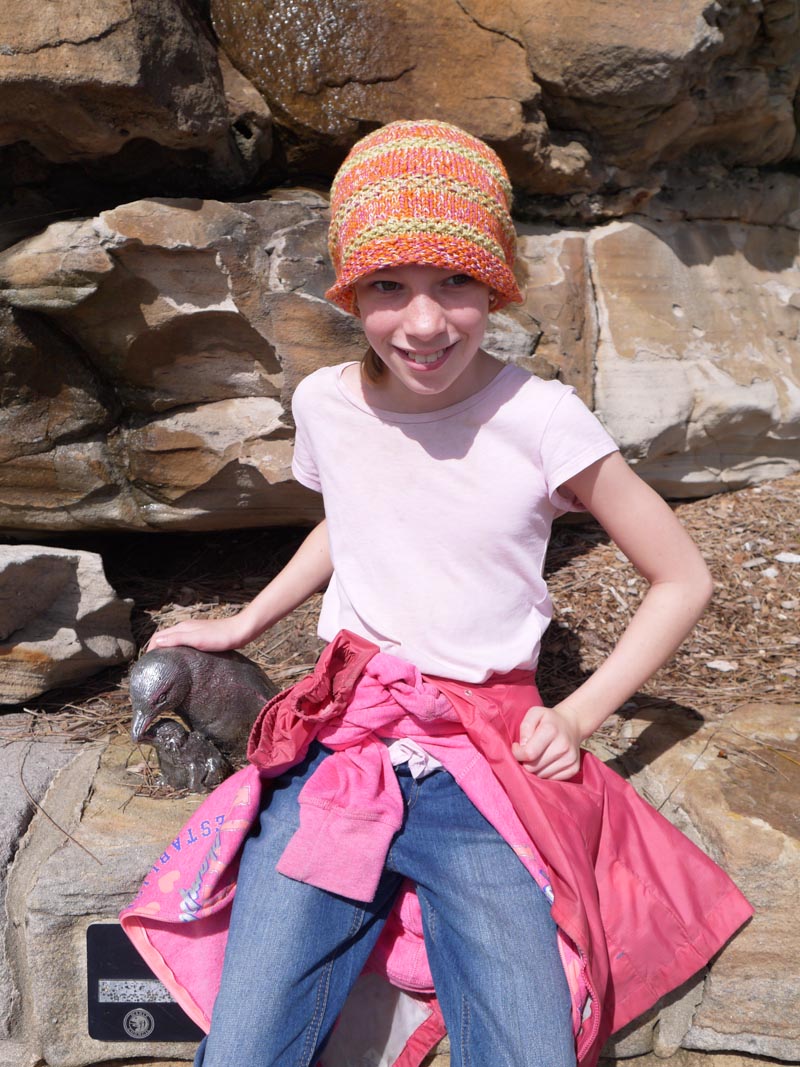 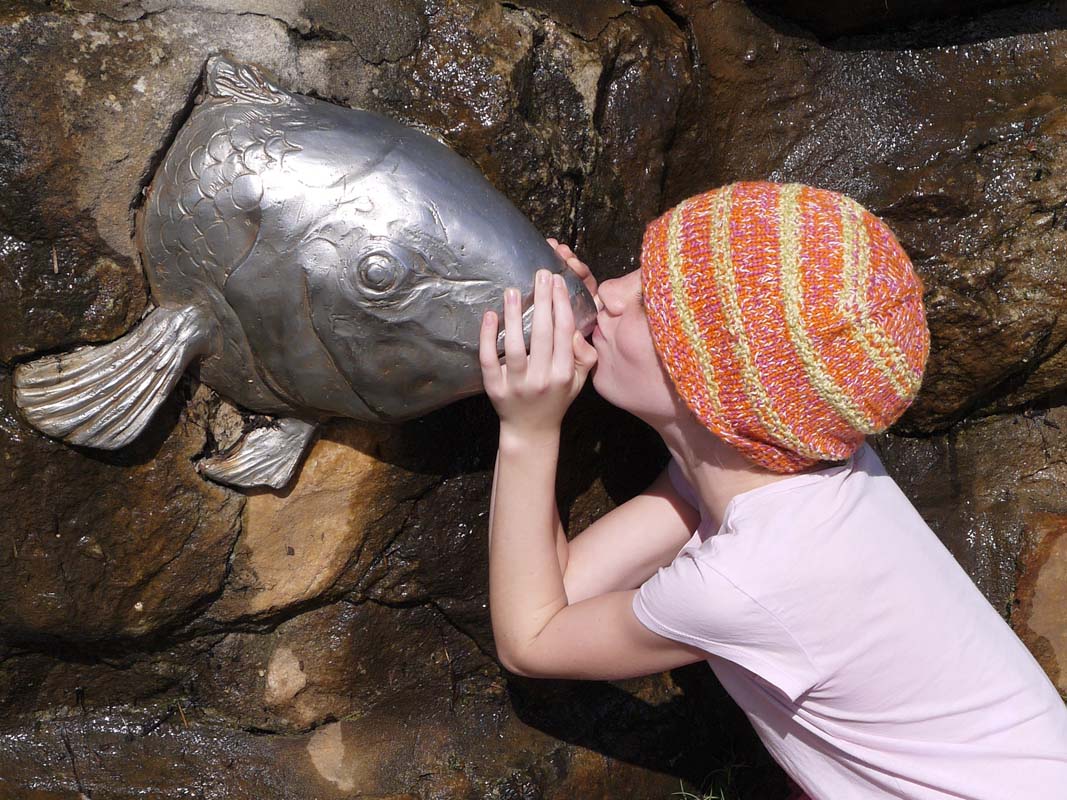 After our tour of Manly, Jane and Duncan were so kind to drive us up the coast to show us some of the other famous beaches near Sydney including Shelly Beach and in the evening they took us to Blues Point Reserve. Blues Point Reserve has a spectacular view of the Sydney Opera House, Luna Park, and the Harbor Bridge. 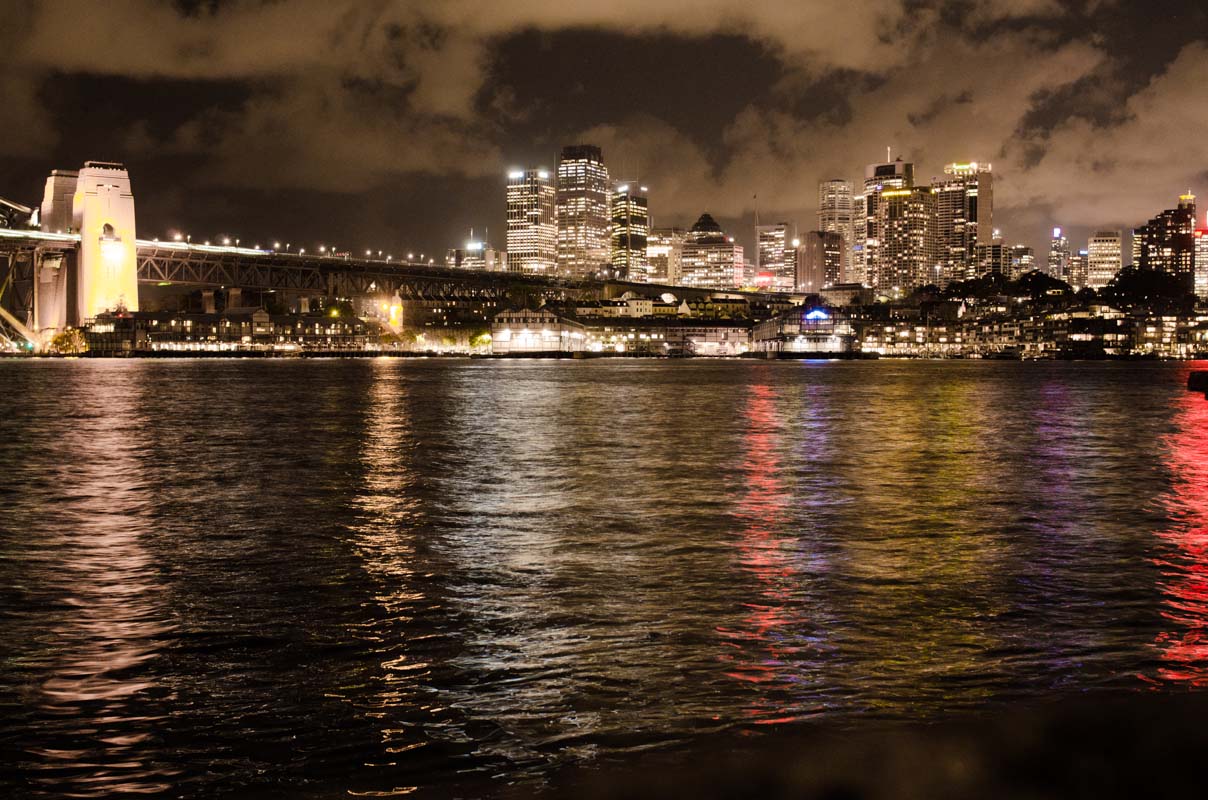 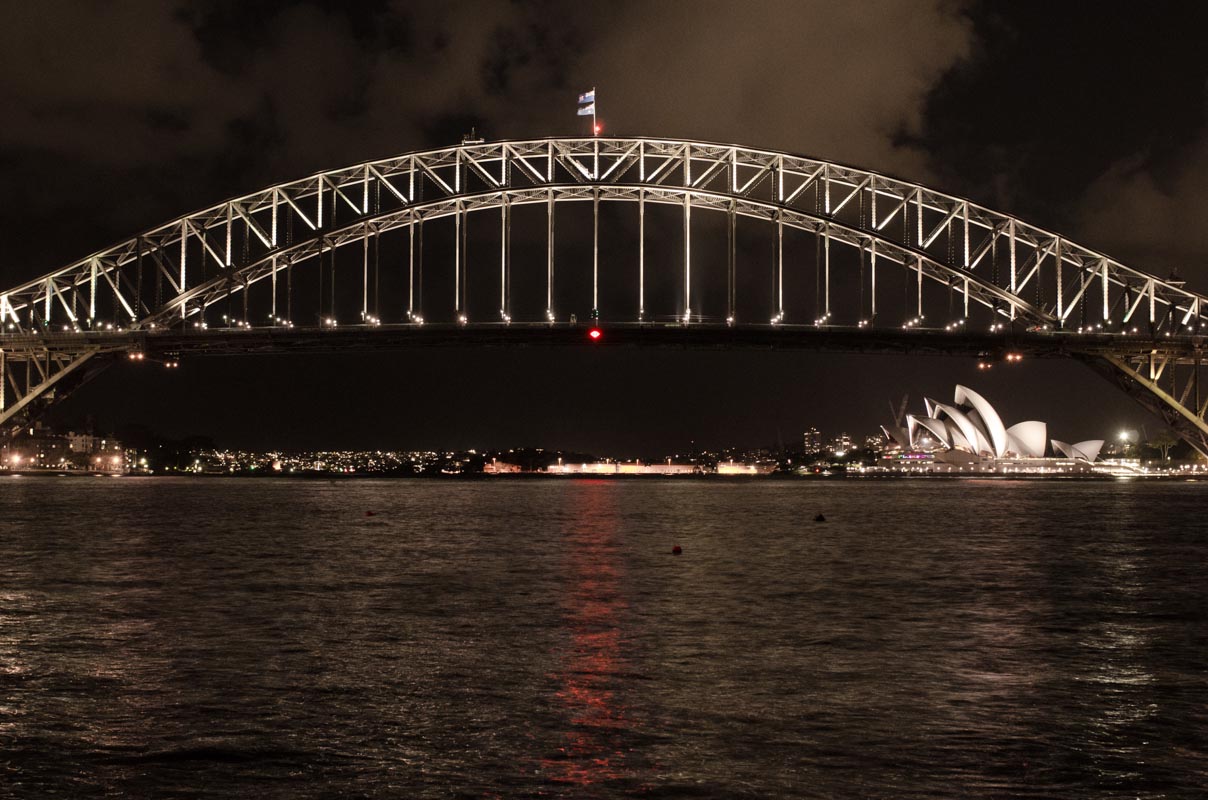 While we only had 3 short days in Sydney, it was definitely worth the time and cost to see the city. If you are interested in more ideas for free or cheap ways to see Sydney, please contact To Travel Too, as this is their stomping grounds.