Towards the end of our 6-week housesit in the Australian town of Toowoomba, we had still not decided where we would go afterwards. We were relatively close to Fraser Island and had been looking at options to see it. The prices for a day tour of the island for the three of us would cost $400, or more. In looking at cheaper options we decided that maybe we should rent a 4-wheel drive vehicle and some camping gear and explore Fraser Island ourselves. We contacted a few companies about this option and were getting quotes of $1000 for 4 nights, which was two-thirds of our entire monthly budget. And then it happened. We received a sign from the travel gods.

As we were busy surfing the Internet looking at places to explore on a budget in Queensland, and not having any luck, I decided to turn on the TV. I started flipping through the channels, and for some reason, some completely random reason, I stopped on a fishing show. I HATE fishing shows! Anyways, we continued our research on the Internet while discussing possibilities. We had just decided that after 6 weeks of being landlocked in Toowoomba, it would be nice to be at a beach for a few days, even if it wasn’t Fraser Island. And then it happened. Just as we were convinced that we would blow our budget and end up in some dive motel nowhere near anything nice, a miracle happened.

While we discussed options the fishing show ended and an Australian travel show came on. The show was featuring glamping at Agnes Water Beach Holiday Park near the Town of 1770. Glamping, as it turns out, is staying in a large safari tent on stilts overlooking the ocean. The safari tent is anything but primitive and is truly glamorous, hence the term glamping. The tents are equipped with electricity, fully stocked kitchen, BBQ grill, and soft beds. But the thing that sets these tents apart from regular tent camping is that these also had an ensuite bathroom with hot showers and flush toilets. It even had a flat panel TV with SkyTV. We immediately went to their website and looked at the prices. They were offering a web special of 4 nights for the price of 3 and they just so happened to have a tent available the nights we wanted. And just like that, we knew where we were going. We booked the 4-night special.

As the homeowners arrived back home after their holiday, we headed down to the car rental agency and picked up a rental car. Driving from Toowoomba to Agnes Water took 7 hours and was through a whole lot of nothing. We pulled into the caravan park in the dark and found our key waiting for us on the wall outside the reception building. Surprisingly, the campground was nearly full and we were glad we made a reservation in advance. We found our tent and unloaded our gear. The tent truly was glamorous! 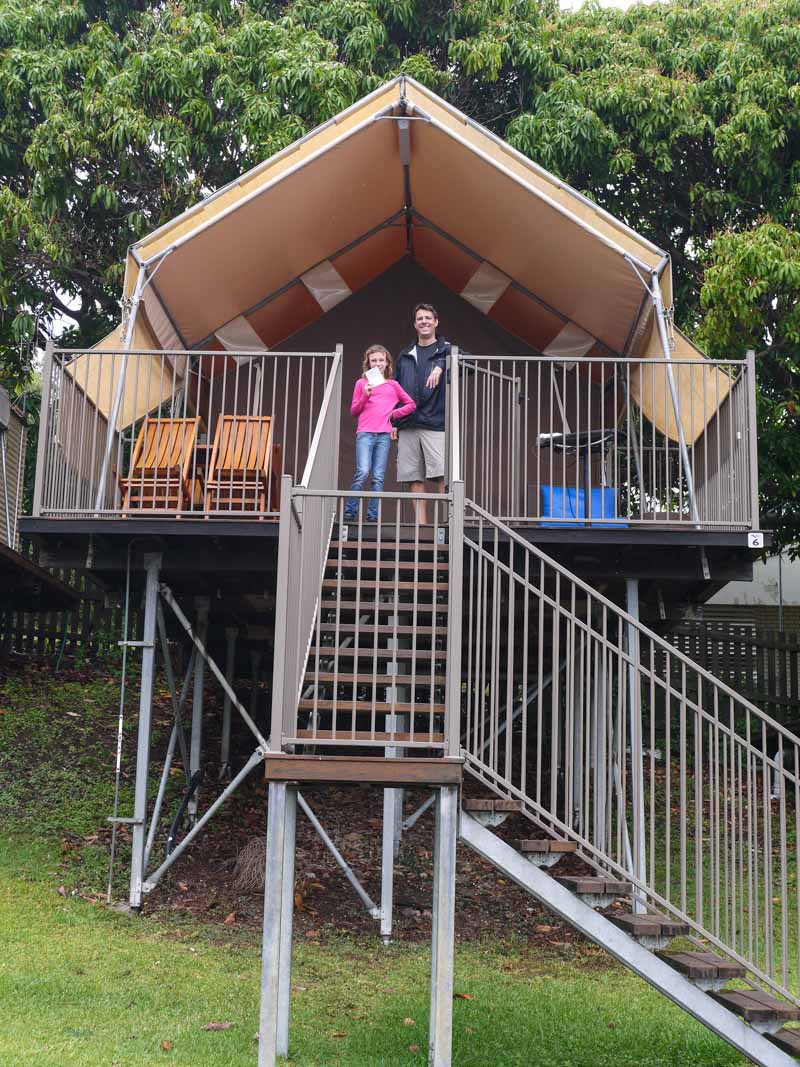 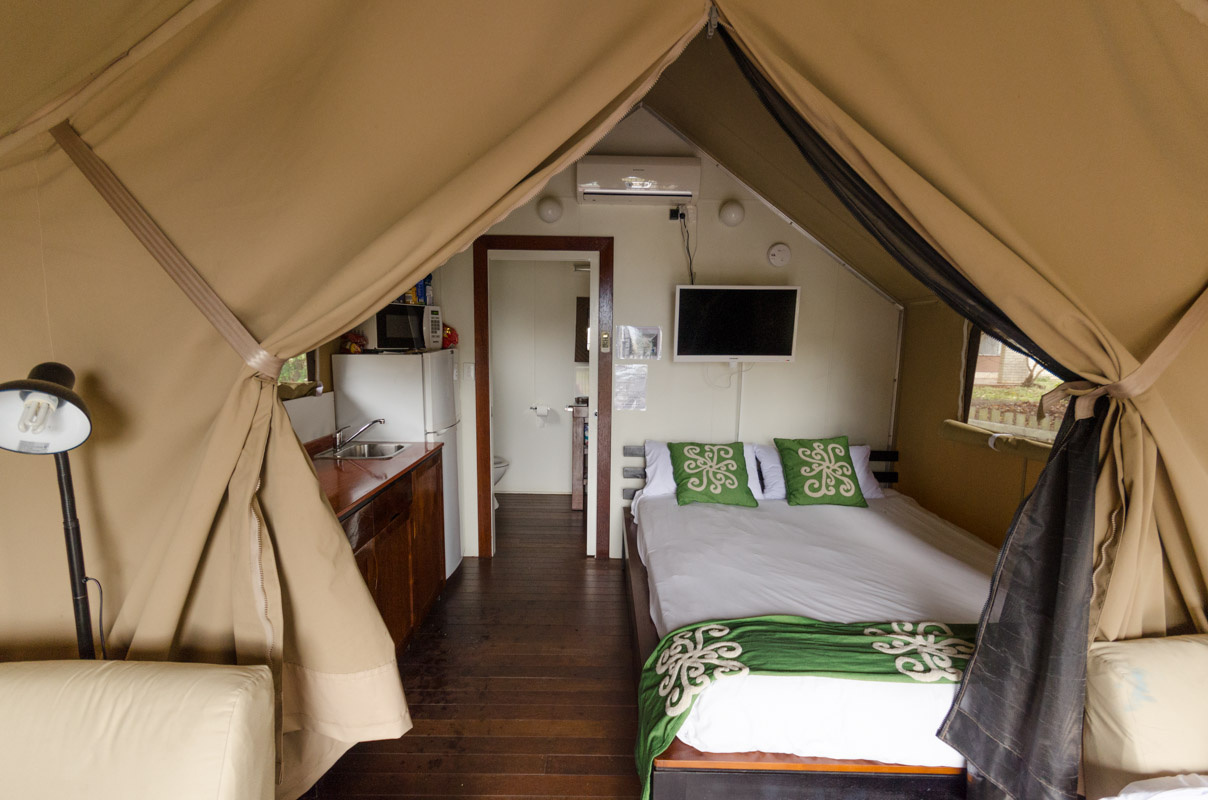 Interior of the Glamping Tent 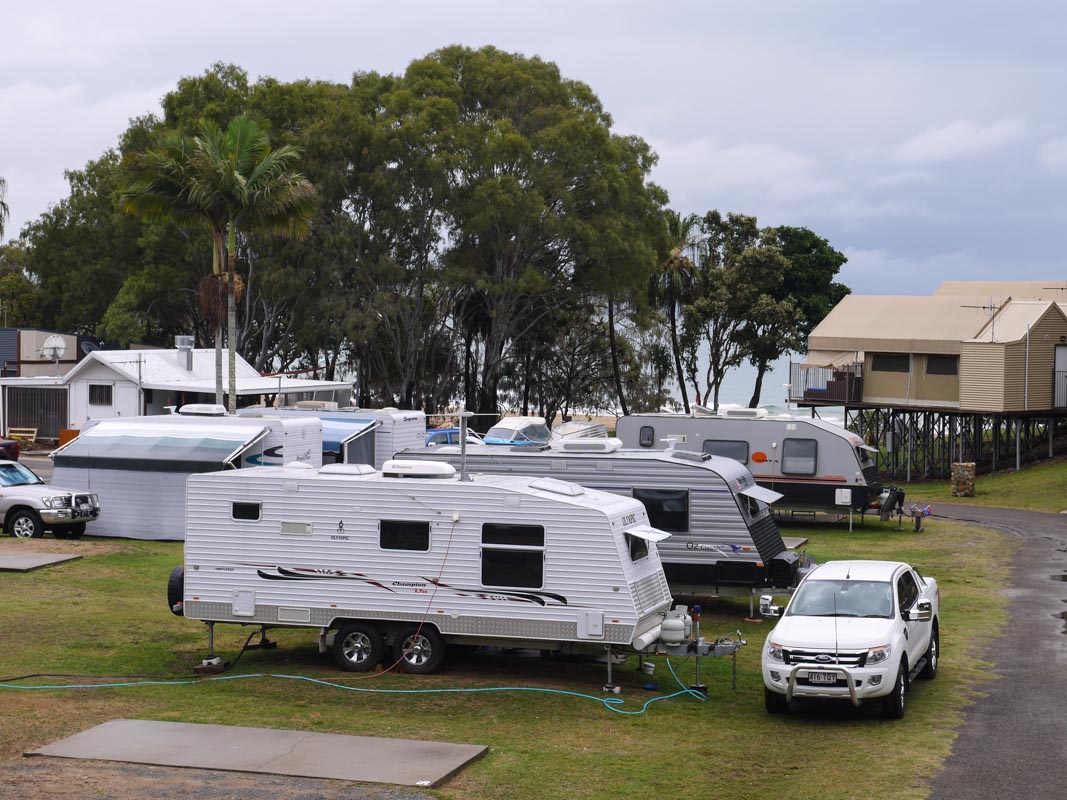 The caravan park sits right on the beach and is within easy walking distance to the small town of Agnes Water. We spent our days enjoying the beach and warm water. We rented surfboards and had fun playing in the surf. Our daughter enjoyed playing with the neighbor kids and we could never get enough of the fantastic view of the ocean from our private deck. And one of the days we felt adventurous and even traveled the few kilometers up the road to the Town of 1770 where Captain Cook made a landing there in, you guessed it, the year 1770. 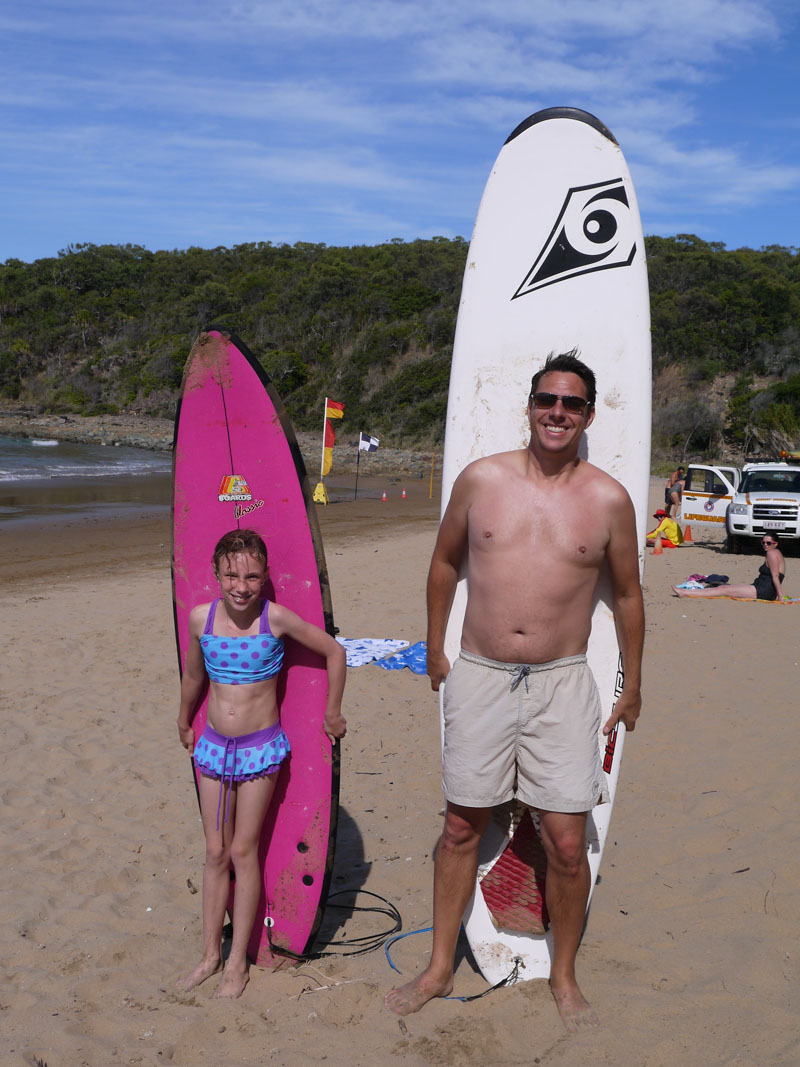 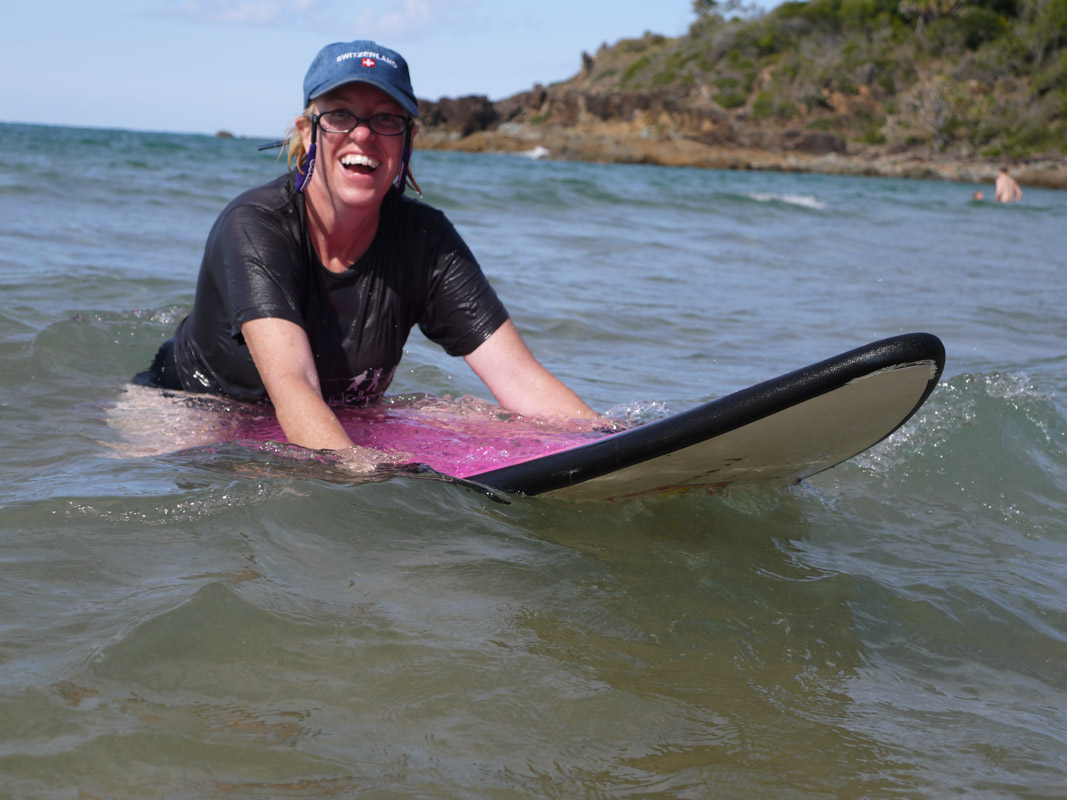 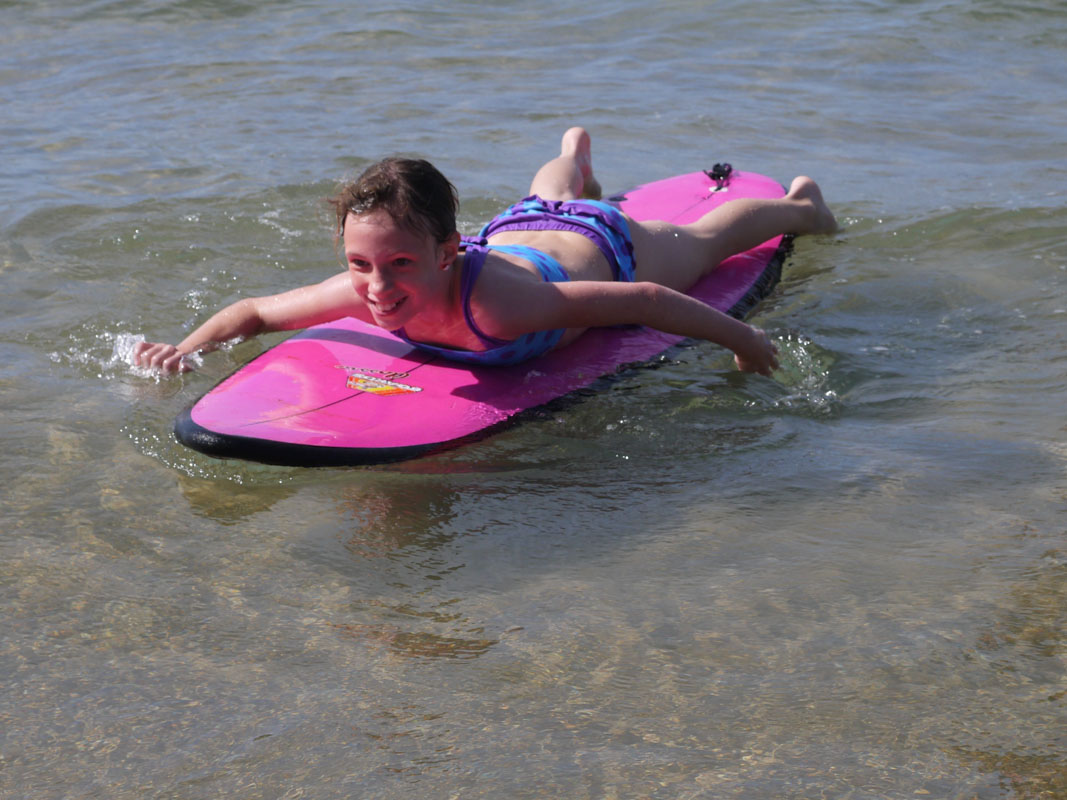 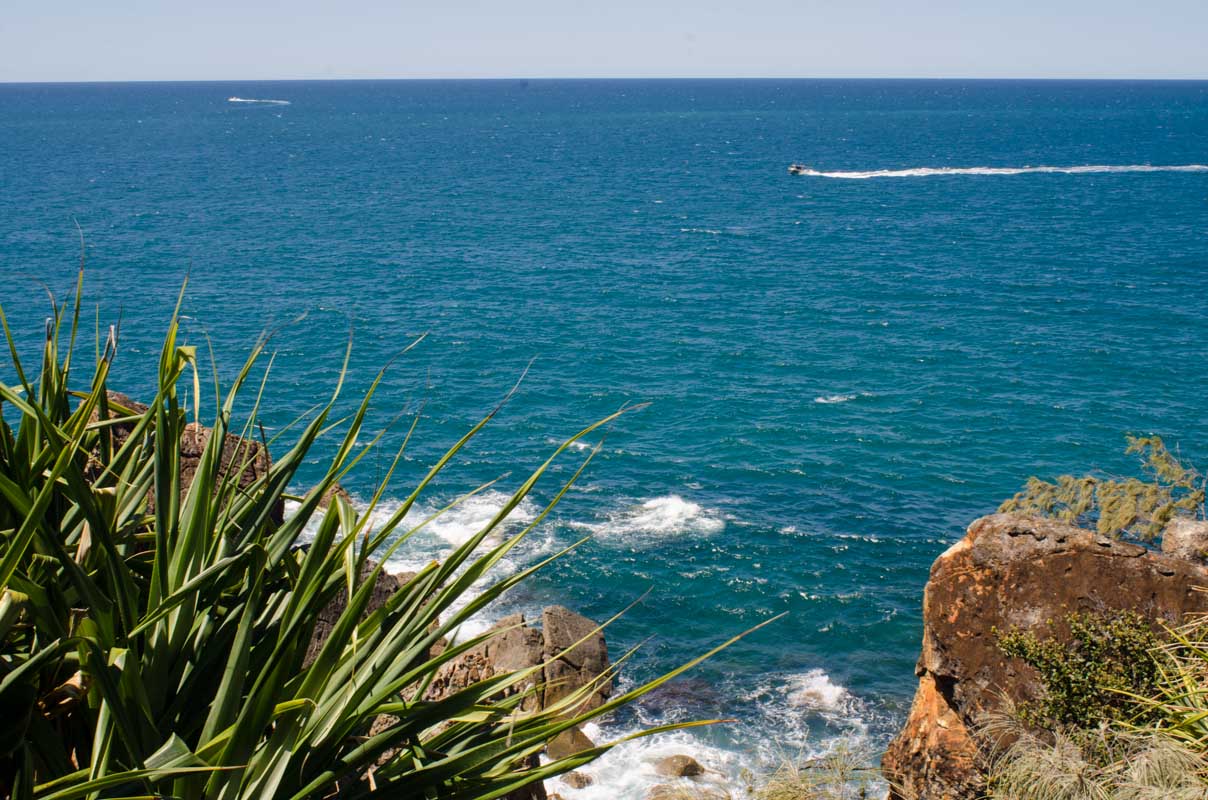 Viewpoint near Town of 1770 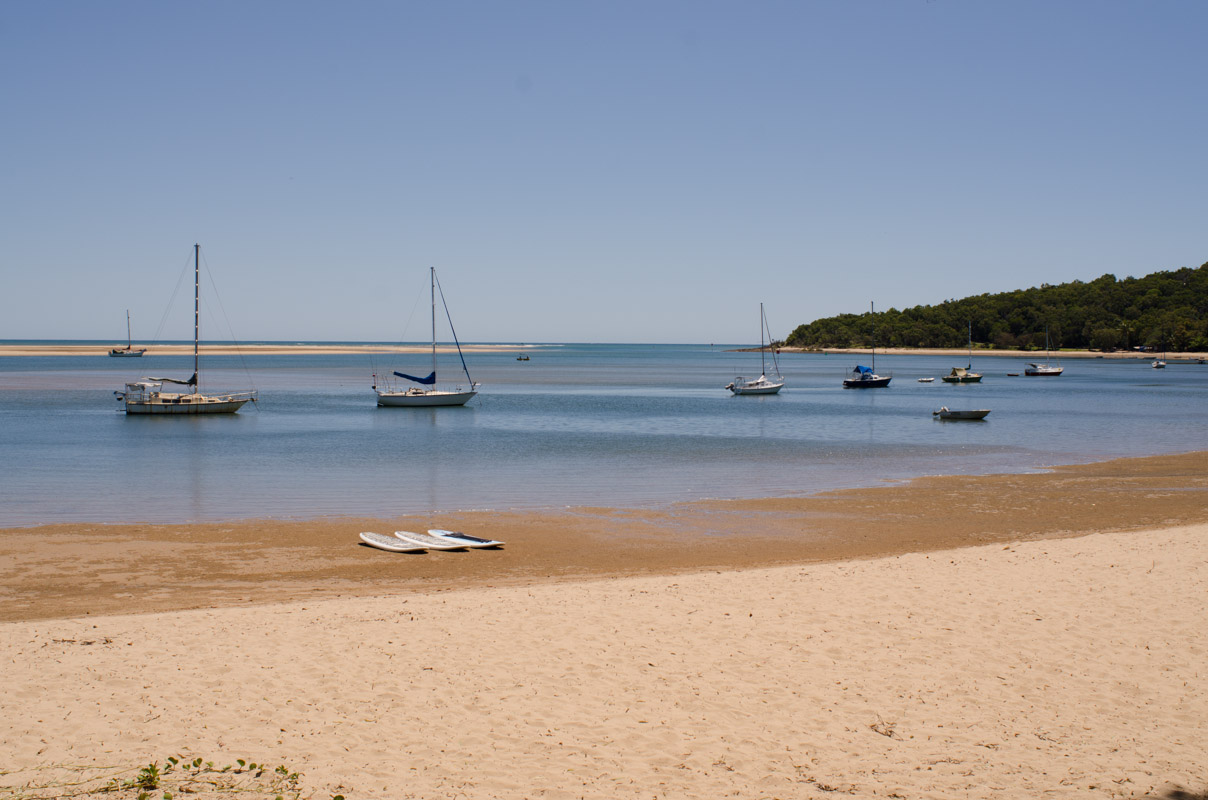 Anchorage near Town of 1770

So that was our experience with glamping and we would love to do more of it. We just wish more campgrounds offered this sort of thing. If you find yourself in Queensland wondering where to stay, we highly recommend checking out this place. And if you have your own caravan, it’s even cheaper.