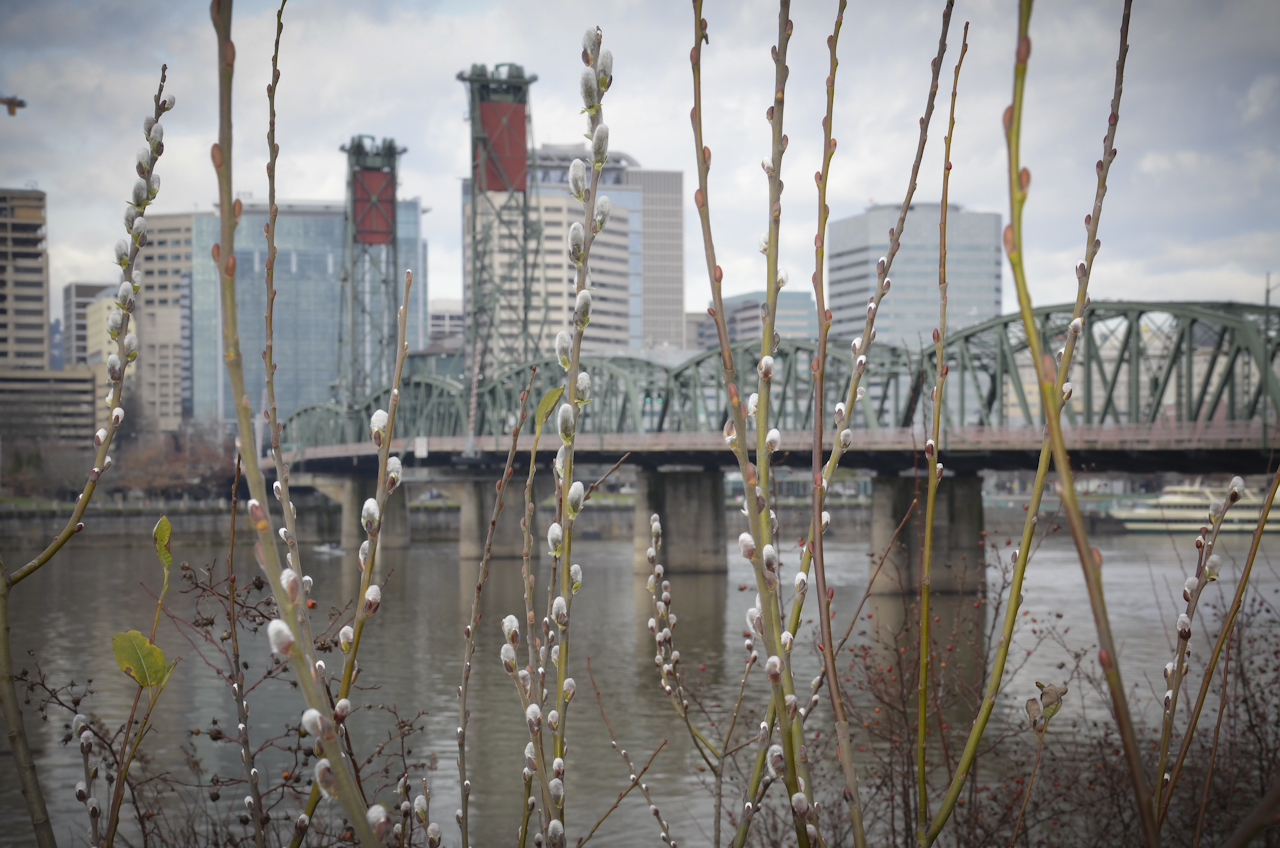 After a long grey Winter, Portlanders rechoice at seeing the first signs of Spring!

Like the title says, there is no perfect travel camera. For many months now, I have been testing a variety of cameras in stores, reading camera reviews, and searching for every camera rumor I can find in an attempt to find the perfect travel camera that exists now or will be available in the near future. For me, the perfect camera would be compact, fast, high ISO, wide aperture, really sharp optics, have easy to use controls including manual focus, high definition video, and it would be affordable. Not too much to ask, is it?

A few months ago I came across a great little camera, the micro four-thirds Panasonic GF1. It was small, had good image quality, had interchangeable lenses, but it was still not perfect. But just around the corner was to be an updated version coming out, the Panasonic GF2 (and since then the GF3). So I, like many others, were hoping the new and “improved” Panasonic GF2 would be the perfect camera. After it was released, there was a lot of disappointment. Panasonic took a step backwards with the GF2. They made the small camera even smaller, removed manual controls and placed them in the menu, did nothing to upgrade the sensor, and added a touch screen. It was great for the point and shoot crowd looking to move up, but anyone with a serious love of photography frowned on it and it was not what I was looking for in a travel camera.

In September Fuji announced their upcoming retro styled Fuji Finepix X100. It was a compact camera for professionals sporting an APS-C sized sensor (same as many DSLR’s), a fixed high quality Fujinon lens, manual controls including a manual aperture ring (remember those?), hybrid viewfinder, and it looks damn sexy! While it would have been even better with interchangeable lenses, a fixed 35mm equivalent would be a great street photography camera.  This became my top pick for a travel camera. I often found myself drooling over the photos and specifications of the X100; that is until the price went up to $1200. Around the same price as an advanced prosumer DSLR that would meet all of my needs, except for size and weight. The release date is not until March and already pre-orders have been placed. This camera has a large following and it will be tough to get one for awhile. But $1200 for a fixed lens camera seems a bit steep, and I was really hoping to get a new camera before our trip to Costa Rica and Nicaragua in May.

The Olympus PEN E-PL2 (or the newer PL3) is another micro four-thirds camera that has just been released. It has many improvements over its predecessors, the E-P1 and E-PL1, and has the ability to change lenses. It seems like a great little camera, and would be a great option, but… once again, it’s not perfect.

Life is Full of Compromises

The one thing I have learned over the last few months is that the cameras that are available now and in the near future are not what I would call a perfect travel camera. But for some, they are more than perfect.  I have also come to learn that cameras are a compromise. You are never going to get exactly what you want; the best you can hope for is to get close enough. Sounds kind of like life, eh?  I could wait years and may never find that perfect camera. Or, I could buy one now that is less than perfect, and make the most of it.

So What Less than Perfect Camera to Buy?

Weighing the options of having a small compact camera lacking some features, or a bulky DSLR with all of the features, I have chosen to go with a DSLR. I would rather lug around the extra weight of the DSLR camera and lens than owning another type of camera and wishing it could do more. So, this last weekend we splurged on a new Nikon D7000 with 18-105mm lens. The newly released D7000 is an improvement over the Nikon D90, which happens to be the camera that I shoot at work. The Nikon D90 is a great camera, but the Nikon D7000 is better and should serve us well for many years. Maybe someday there will be a camera available that will meet my needs as a perfect travel camera. But for now, we have a great camera that will meet our needs for photos and video. We will just need to schedule the occasional chiropractor appointment to relieve the pain in our backs from lugging it around.

This is a photo Kerri took of me fly fishing at Clear Lake on Mt. Hood. We often enjoy camping there during the summer months.

These are the outer bands of Hurricane John the day before it was to make landfall in Cabo San Lucas. Luckily, it fizzled to a tropical storm.