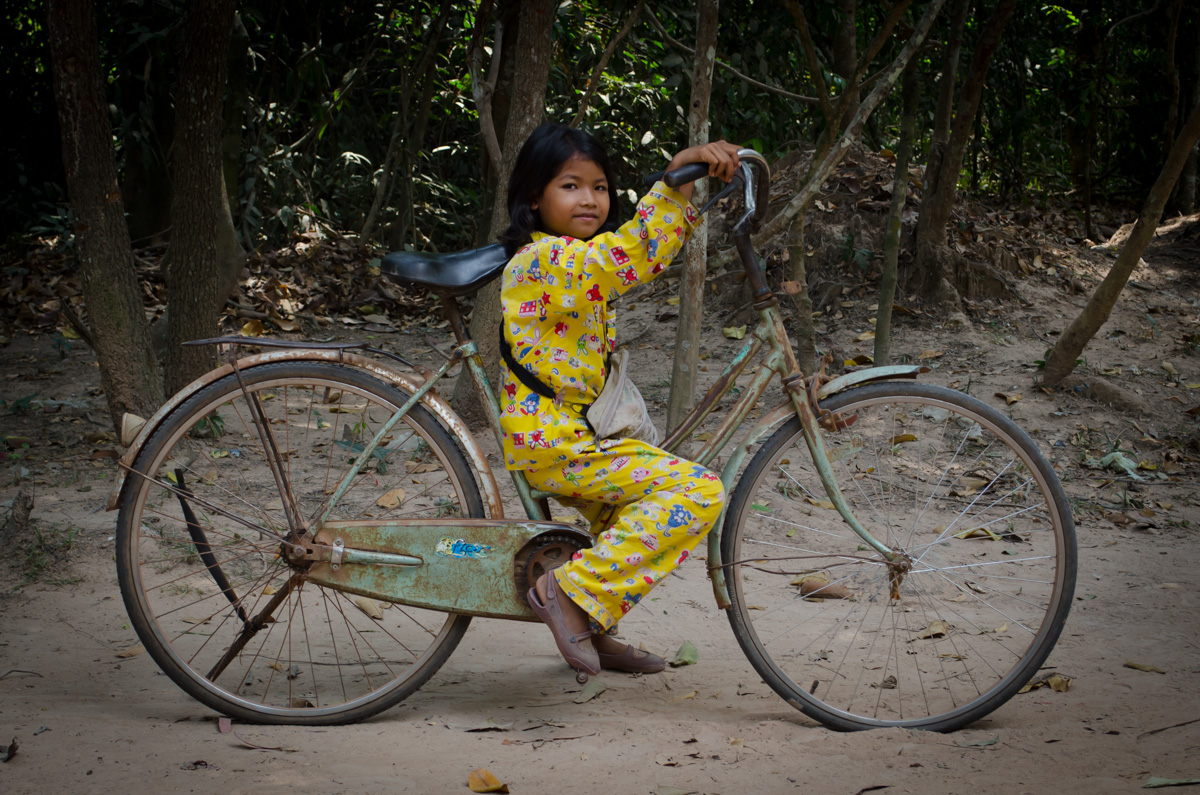 One of the things that we love about Cambodia are the people; especially the kids. They live hard lives, yet they always have a smile on their faces and are happy to see you. Most people only take photos of the temples, but I find the people in Cambodia so much more interesting to photograph. I found this girl just sitting on her bike on the edge of the jungle. I took her photo and then walked up to show her the photo on the camera. She looked at her own image and gave me a big smile. Hopefully it makes you smile as well.

There were so many clues, but I did not listen. Gut instincts are part of surviving world travel and you learn to listen to these instincts. It’s like the universe gives you little hints about future outcomes and if you listen you can actually avoid dangerous situations or find wonderful once in a lifetime experiences. Watching the sunrise over Angkor Wat is one of those once in a lifetime experiences, but I did not listen to the warnings.

When the little girl staying at our hotel told our daughter Sydney that the sunrise over Angkor Wat was boring, that could have been a clue. But then again, little kids find a lot of things boring that an adult finds stunning. If you’re a parent, you know exactly what I’m talking about.

We made arrangements with our favorite tuk tuk driver to pick us up at our hotel in the morning. He was very familiar with the Angkor Wat complex and told us the best time to witness the sunrise would be to leave our hotel at 5am. Waking up at 4am is not our idea of fun, but the chance to create an amazing postcard quality photo was motivation enough. I had packed my camera, tripod, and assorted lenses the night before and we were excited for the morning. Well, as excited as you can be for having to wake up at 4am!

We awoke right on time at 4am and after quickly getting ready we headed out into the darkness to meet our tuk tuk driver. As we tried to leave our hotel we found that the large metal gate was padlocked. We joked that maybe this was a sign that we were not supposed to go that morning. Kerri went and found someone to unlock the gate and a short time later we were out in front of our hotel.

When making arrangements with our tuk tuk driver I had a strong feeling that I should get his mobile phone number, but figured we could always get it later. If I would have followed through with this I would have been able to give him a call to find out where he was. It was 5am and our tuk tuk was nowhere to be seen. Perhaps another warning that today was not the day to go watch the sunrise. Another tuk tuk pulled up and asked us if we needed a ride. We assured him that we already had a driver and we were expecting him. He stayed anyway. At 5:15am we gave up on our tuk tuk driver and negotiated a fair price with the other tuk tuk driver and got in.

As we headed through the darkness in a long line of tuk tuks and tourist vans, we started to have the feeling that watching the sunrise over Angkor Wat is a popular event. A little too popular! As we arrived at the site of the Angkor Wat temple we were amazed at the amount of people that were there. It was still dark, but the sky was just starting to turn a shade lighter of black, which I guess could be called dark grey. A sure sign that the sun was on its way!

We quickly made our way across the causeway with the hoards of other tourists. I asked a guide where the best place for a photo was and he said to keep going and turn left and look for the pond. This is the location where all the famous Angkor Wat photos are taken showing the mirror reflection of the temples in the water. This was the shot I was looking to take, especially if we had a beautiful sunrise in the background.

The causeway ended at the outer wall and we made our way through the dark passages and emerged on the other side to see the famous temples for the first time. The sky was getting a little lighter now and I wanted to hurry to find a good spot and setup my tripod. As we reached the pond we realized that we should have arrived much earlier. There was a wall of tourists 3 to 4 people thick with their tripods already setup wherever there was space. The ideal locations were already taken and there was no way I was going to have a chance to squeeze in. I paced back and forth along the pond looking for an alternative view while Kerri and Sydney went to find a spot to view the sunrise. An endless line of people continued to approach and I knew I needed to setup quickly before the small pond was completely surrounded. I headed for the left side of the pond where there were no people and found the spot where I could get the temple reflected and the sunrise. Soon after setting up, others followed suit and set up around me, including in part of my composition. I moved my tripod to the very edge of the stones surrounding the pond and readjusted my composition to cut out the people now lining the edge of the pond. I took a couple of test shots, adjusted the settings on the camera for proper exposure, and waited for the spectacular sunrise. And waited. 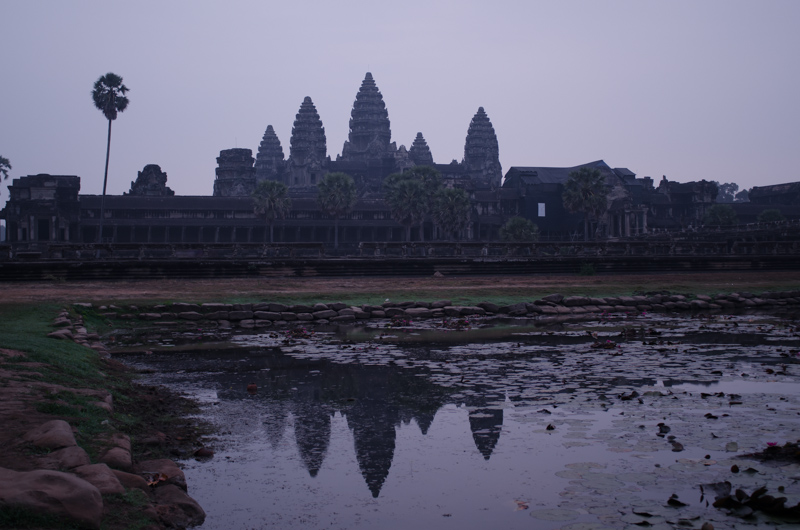 Angkor Wat sunrise without a sun

The sky continued to turn to lighter shades of grey and I continued to adjust my settings to compensate. Anytime now, I thought, anytime. As it got a bit lighter I soon realized that the sky behind the temple was overcast and there was not going to be a sunrise that day. The sky would just change to a lighter shade of grey. There would be no magic hour that morning. 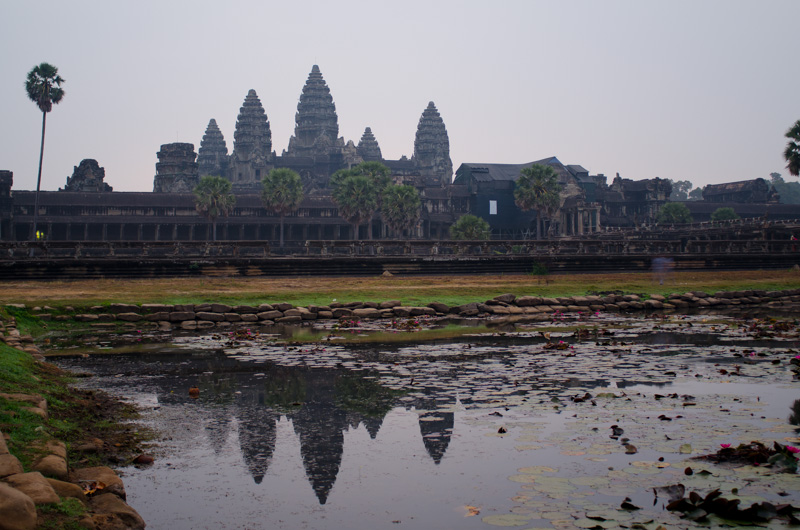 Angkor Wat sunrise with a lighter shade of grey

I decided to wait anyways and hoped that maybe I would be rewarded with something. Anything. At looking back at the crowds of people I actually found them more interesting to photograph then the temple. 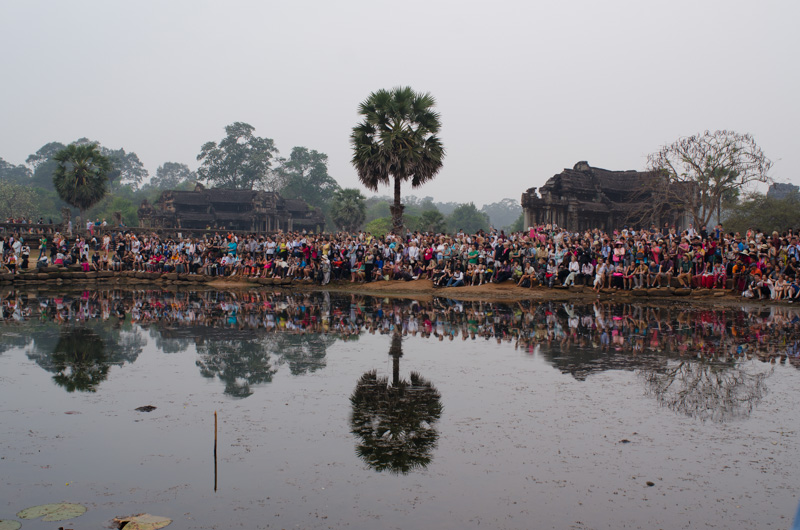 After awhile I packed up and went to find Kerri and Sydney. We were all a little disappointed at witnessing the most boring sunrise ever. In fact, we still had not seen the sun. We wandered around the temples, which were impressive, but lacked the beautiful golden rays of the morning sun to make for a great photo. Everything was just a yucky grey.

At the far end of the temple grounds we decided to head back to the parking area and find our tuk tuk driver and head back to the hotel for a nap. As we were walking Sydney noticed something moving in a tree. Monkeys! We had heard that Angkor Wat has monkeys and they can be very nasty, but who can resist monkeys. I changed to a telephoto lens and we had a great time watching a troop of Macaque monkeys forage for breakfast in the trees from a slight distance. 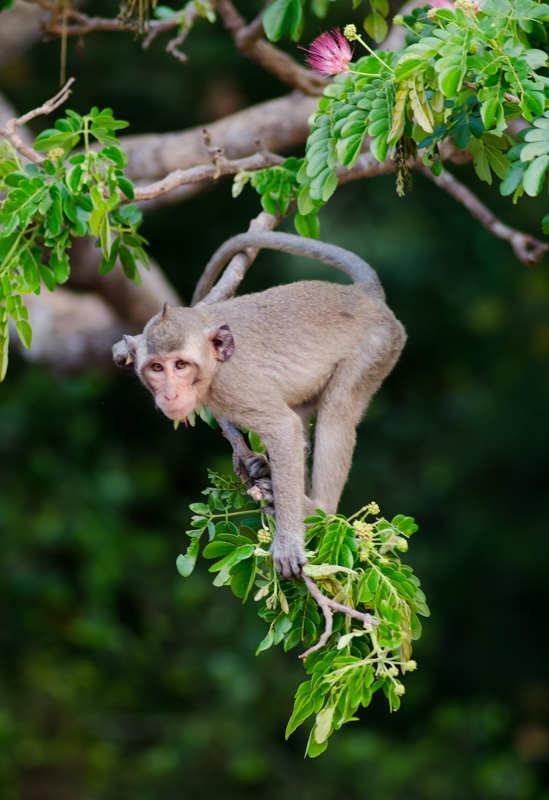 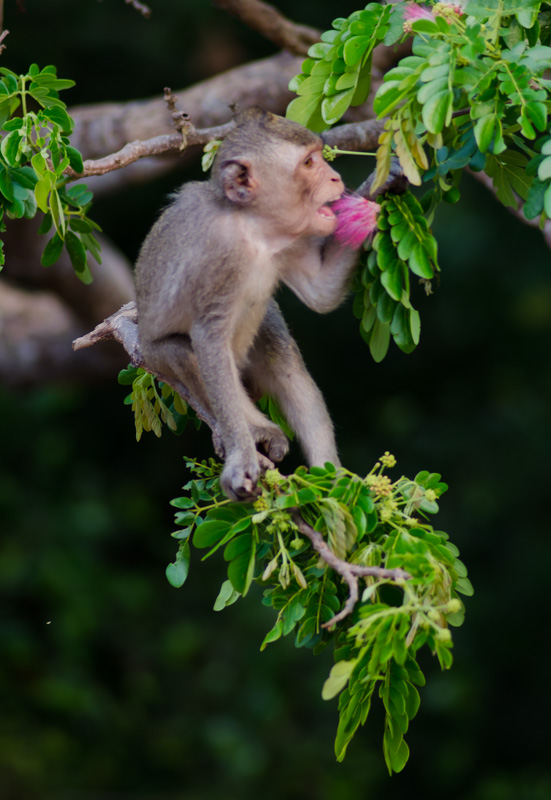 After an hour of monkey watching we found our tuk tuk and headed back to the hotel for a much needed nap. Other than the monkeys, it was a wasted morning and we should have listened to the warnings. Maybe we will have better luck with the sunset…