In February my father mentioned that he was thinking of taking a REI group tour that would hike around Europe’s Mont Blanc with several of his hiking friends and their daughters.  He asked whether I would be interested.  My dad explained that we would be staying in a hotel each night and REI would shuttle our bags from hotel to hotel.  He explained that I would just need to carry a daypack.  However, he warned me that the hike was 100+ miles over an 11-day period with daily elevation gains that could exceed 3,000 feet.  Carrying just a daypack?  No problem!  I blithely said yes thinking how hard could this be? 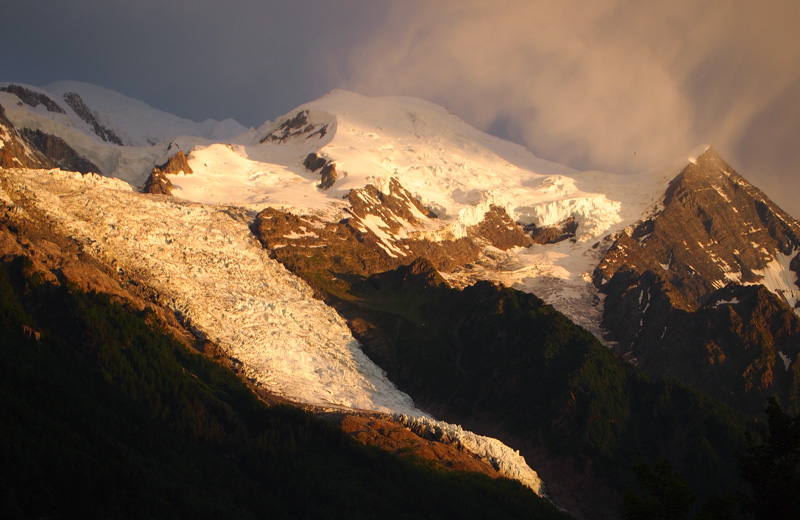 However, as the date drew closer the panic began to set in.  Oh my!  What had I gotten myself into?  Since traveling in Europe we had been walking almost everywhere averaging between 3 to 8 miles a day.  But all the places we had been staying at were close to sea level and most the walking had been on even, flat surfaces.  A steep trail strewn with rocks was a whole different thing.  I had rarely been on a trail since leaving the US.

To help ease some of my worries, I started walking stairs daily with my backpack loaded with weight.  Despite this, I still had doubts as to whether I would make it and as the trip date approached I became increasingly worried.  I didn’t want to disappoint my father or to hold back the group.  Our group from REI would consist of 13 other individuals, some of whom I knew from childhood, and all surely in much better shape than I.  I kept on thinking, “I am going to die!”  My thoughts were in a jumble. Would my legs be able to propel me the entire way?  What if couldn’t make it and failed?  Yes, I said the big nasty “F” word.  What if I failed?

A couple days before the official start of the hike, I left Jason and Sydney and took the train from Florence, Italy to Geneva, Switzerland where I would meet up with my dad.  Leaving Florence was bittersweet.  I was excited to see my dad and have this opportunity to hike with him in the Alps.  We had never done anything like this together before.  This was an opportunity that I did not want to miss, but I was also feeling sad, tinged with guilt, as my daughter, Sydney, and husband, Jason, would not be joining me on this adventure. After all, one of the reasons that we had decided to leave on our around-the-world adventure was to spend time together and experience new places. Here I was going off on my own adventure without them.  This would also be the longest time that Jason and I had been away from each other since being married.  It also felt surreal that I was actually really leaving to hike a 100-miles, something I had never done before. 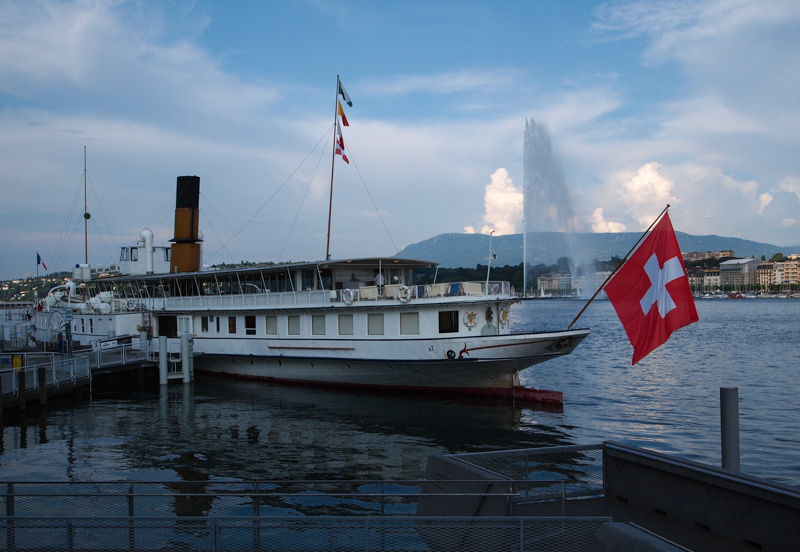 As the train made its way up to Switzerland, the landscape gradually changed from the rolling hills of Tuscany to jagged snow covered Alps.  Wow!  It was beautiful, but daunting indeed.

As an entire group we all meet for the first time at the Geneva Airport and then we took a bus to Chamonix, France.  Our hotel in Chamonix had an amazing view of Mont Blanc and the glacier.  Now the reality really began to set in.  Oh no! Mont Blanc and the surrounding mountains looked really high from the valley of Chamonix. The night before our first day of hiking I was so consumed by worry I didn’t sleep at all.  Our first day would immediately start with an uphill trudge of over 2,000 feet in elevation gain. 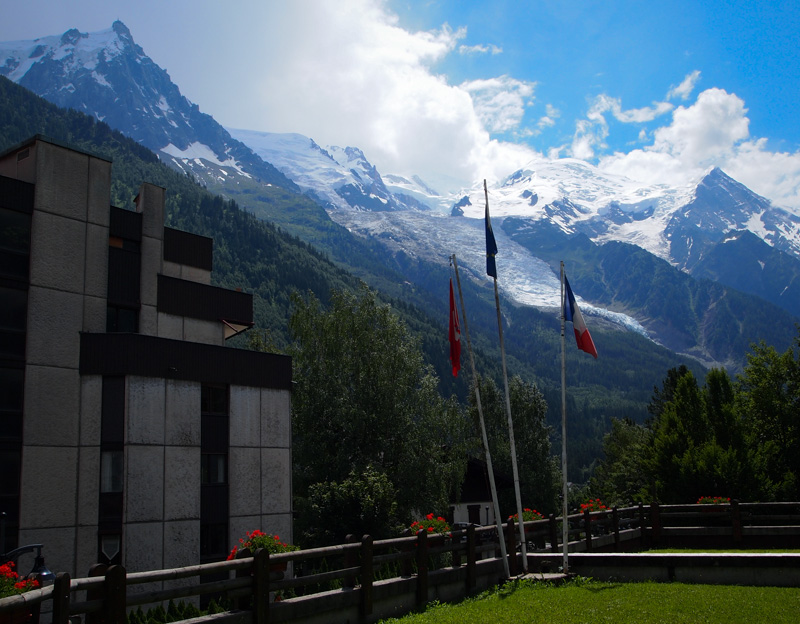 View of Mont Blanc from our hotel 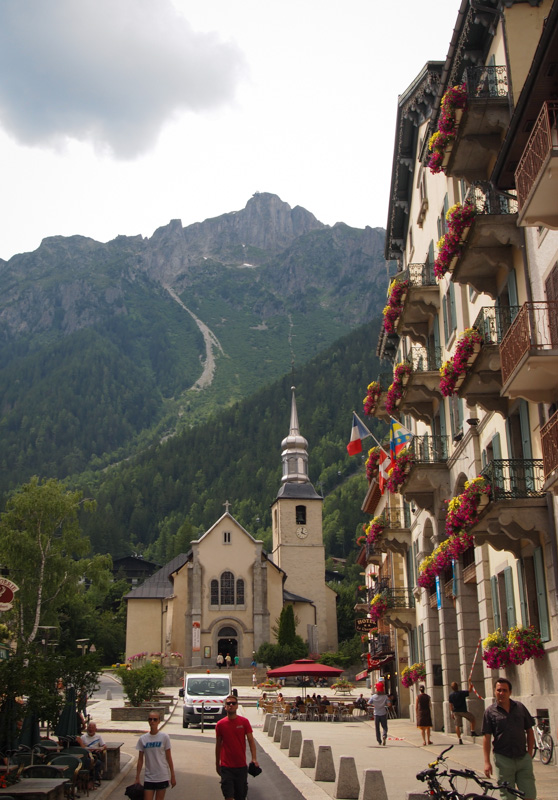 I began the first day of the hike full of jitters and uncertainty.  However with each switchback and step my confidence began to build and I knew I actually could do this! Although, I was by far not one of the fastest I began to realize that it was really about putting one foot in front of the other and to just keep on going.  I also realized that Tour Mont Blanc wasn’t about being the fastest or best, it was about enjoying the precious time with my dad, admiring the stunning scenery of the Alps and wildflowers, and challenging myself. Success! At the top of our first incline with my dad. 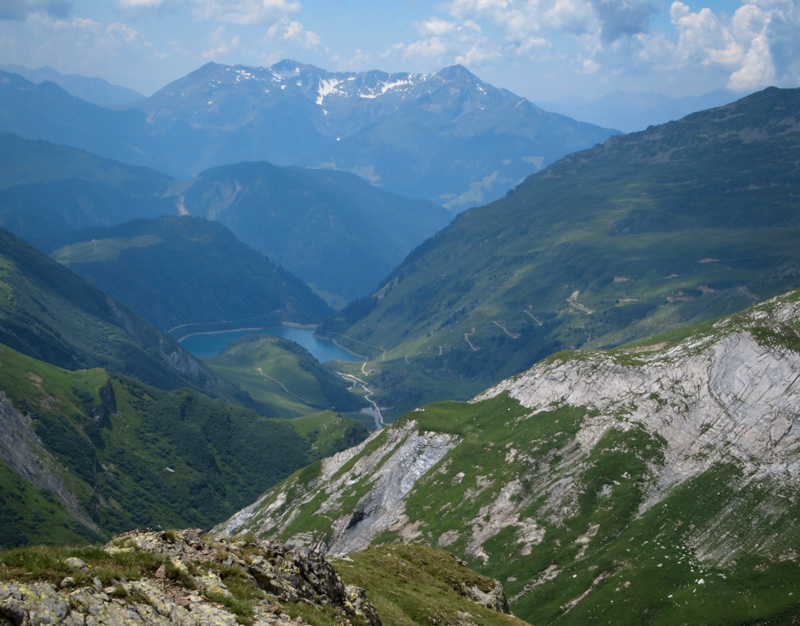 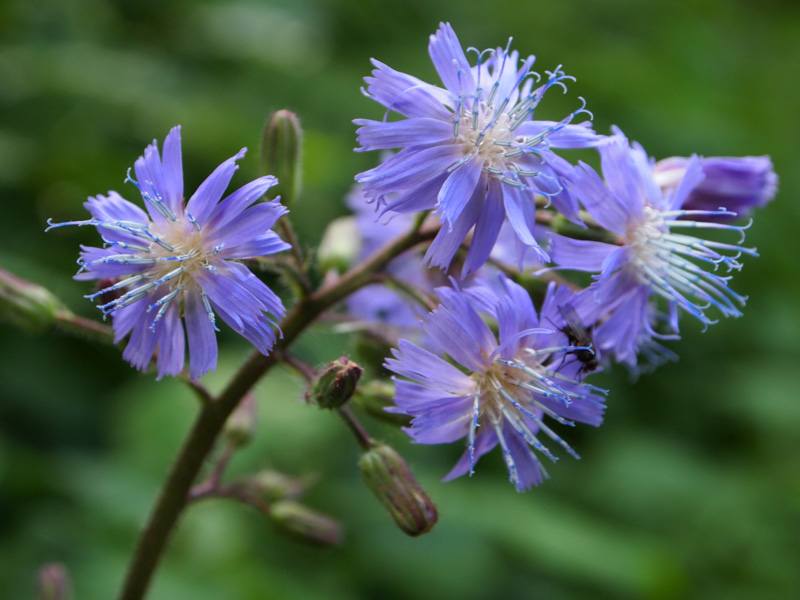 Wildflowers Along the Trail 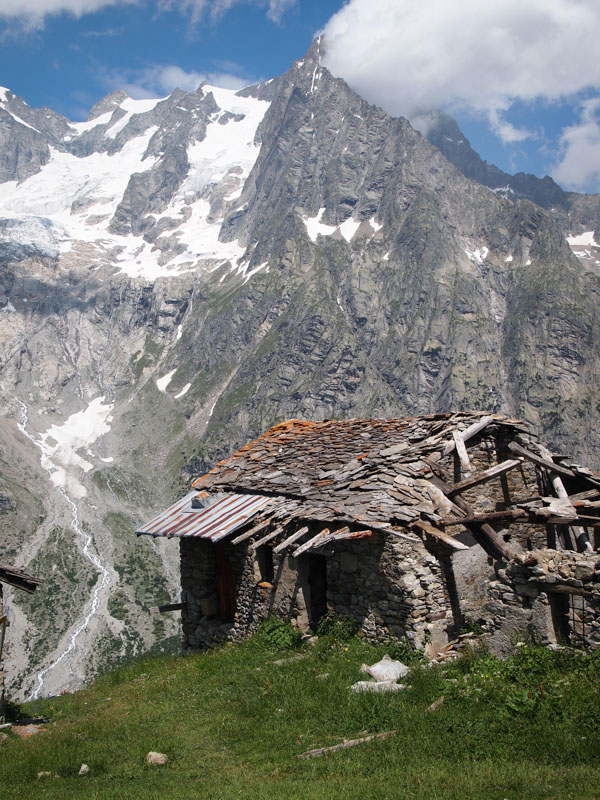 During the Tour Mont Blanc hike I had plenty of time to reflect on lessons learned from the hike, my current life, future wishes and desires.  On the first day of hiking there was one individual who struggled and was unable to complete the hike that day.  But despite this set back, this individual continued on.  At the end of the trip, I asked the individual whether it was worth it.  They replied that after the first day they had thought about quitting, but were so glad that they decided to continue on.  I must say that I really admired this individual’s determination and willingness to continue trying. 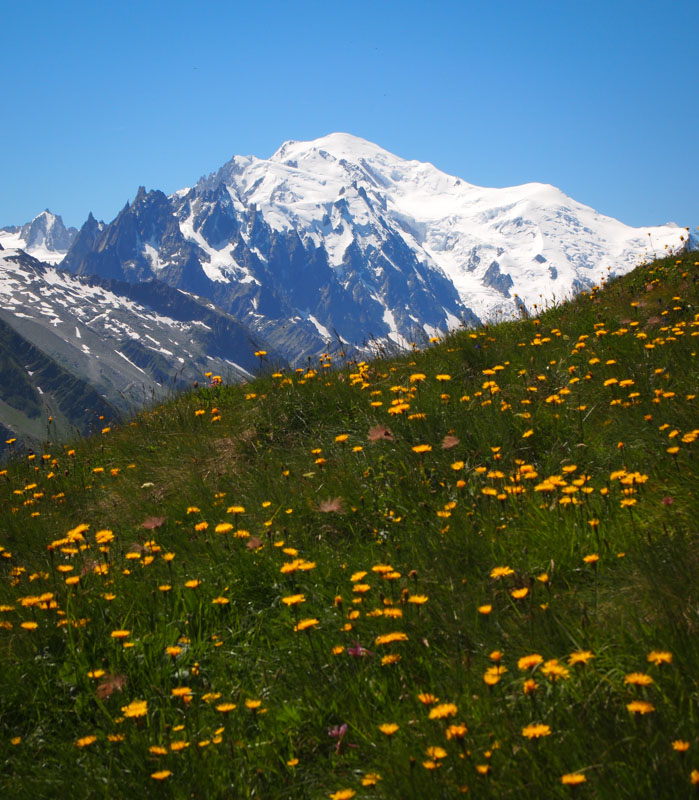 This situation made me think about how I have used fear….fear of failure, fear of change, or fear of the unknown as a roadblock in my life or as an excuse not to try.  Admittedly, there have been several times in my life that fear has controlled me; I have stayed in a job longer than I should have or been too timid to say what I really think.  When Jason first came up with the idea of travelling the world I used any excuse as to why we could not travel. It costs too much!  What about our house? What about Sydney’s education?  The list went on and on.  But what I was really saying is that I was scared stiff of all the what if’s.  I still am scared about the future, but am grateful that I have a husband who loves me enough to not allow my excuses to stop us from working towards our dreams. My one gift I hope that I can impart to Sydney as a parent is to not allow fear…fear of failure, change, or the unknown to control her; to provide an environment where she feels comfortable to fail and the will to continue trying. 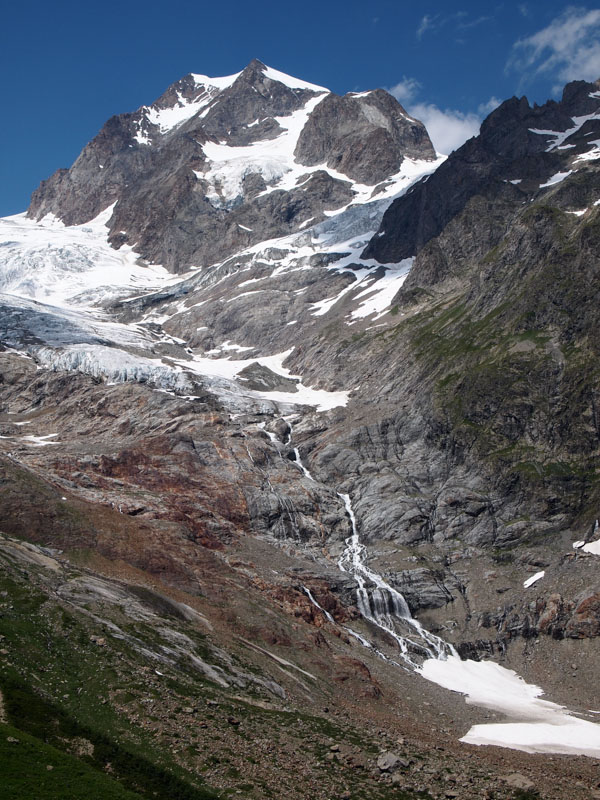 During the hike, our group frequently joked that it should be called “Detour Mont Blanc” instead of “Tour Mont Blanc.”   It seemed like every day we were taking a detour for one thing or another, such as to see the elusive chamois, ibex or for a better place to eat lunch.  Many of the detours would add miles to our hike.  At first I would grumble and wonder why we couldn’t just stick to the trail.  However, once we reached our destination it all became worth it. 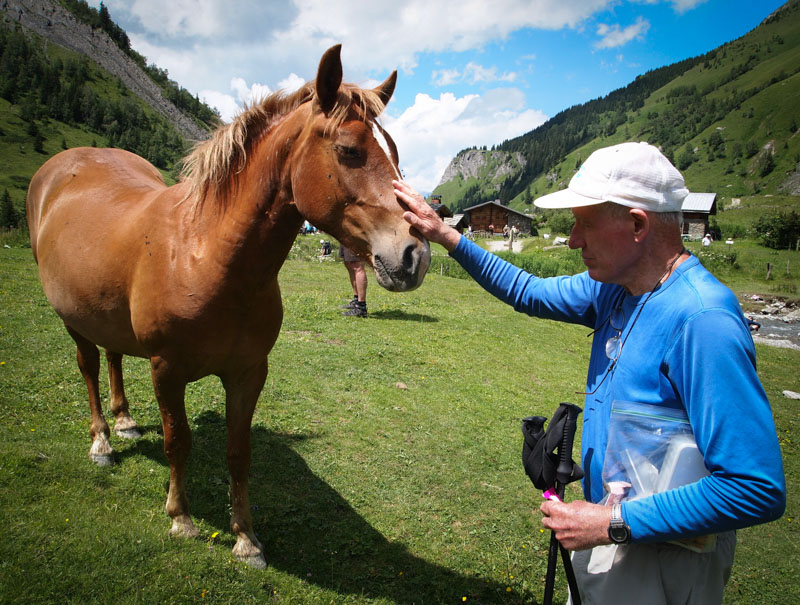 Friendly horse that decided to join as for lunch.

This made me think about other “detours” in my own life and how many of these “detours” have actually been better than the original path I had chosen.  In 2009, I was laid off from my job as a pediatric diabetes educator.  I remember feeling devastated by this and wondering about my own self-worth.  I kept on thinking, “A nurse never gets laid off.  It must say something about me.”  But, as it turned out despite the “detour,” I ended up in a job that actually gave me a whole lot more satisfaction, an opportunity for growth, and where I was still able to obtain my certification as a diabetes educator.  No, it would not have been a detour I would have readily taken, but now I am grateful that it happened. 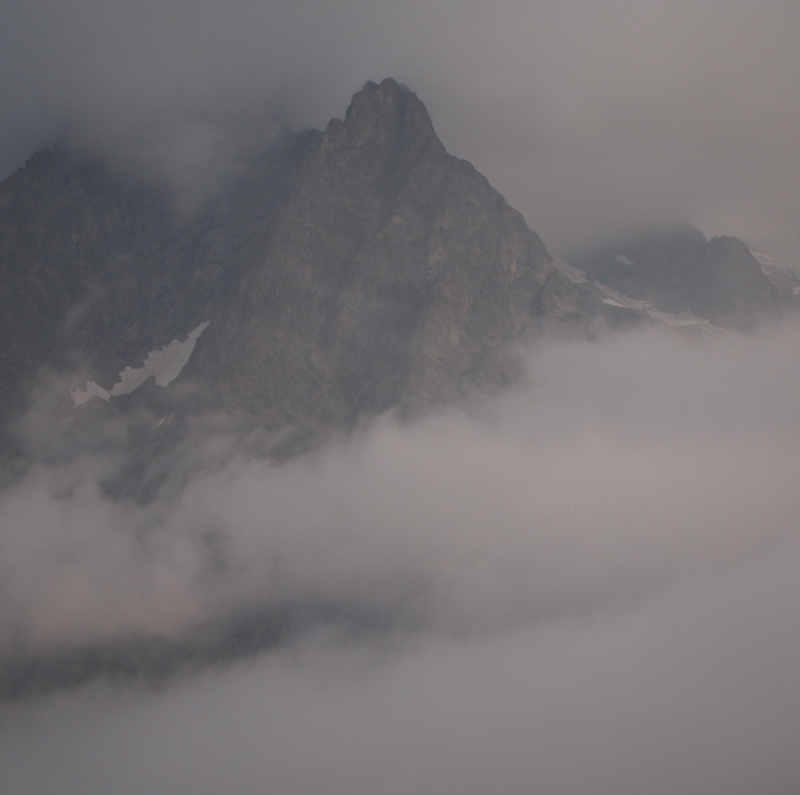 On the hike, I really enjoyed getting to know each person in the group and found that each individual was incredibly kind and interesting.  I also grew to really admire several of the people in the group, as they continue to follow their dreams despite adversity.  However, I must say the person that I most admired on the hike was my own father. No, this is really not I being biased.  Within the last couple of years my dad has had a total knee and hip replacement and is also 75 years old   (hopefully he is not too irritated with me now that I have revealed his age.)   I love his determination and the fact that he does not allow the difficulties in his life to prevent him from living his life to the fullest.  I am very proud to tell people he is my father.  At the end of the hike the guides gave him the nick name “Iron Will” which seems very fitting to me. 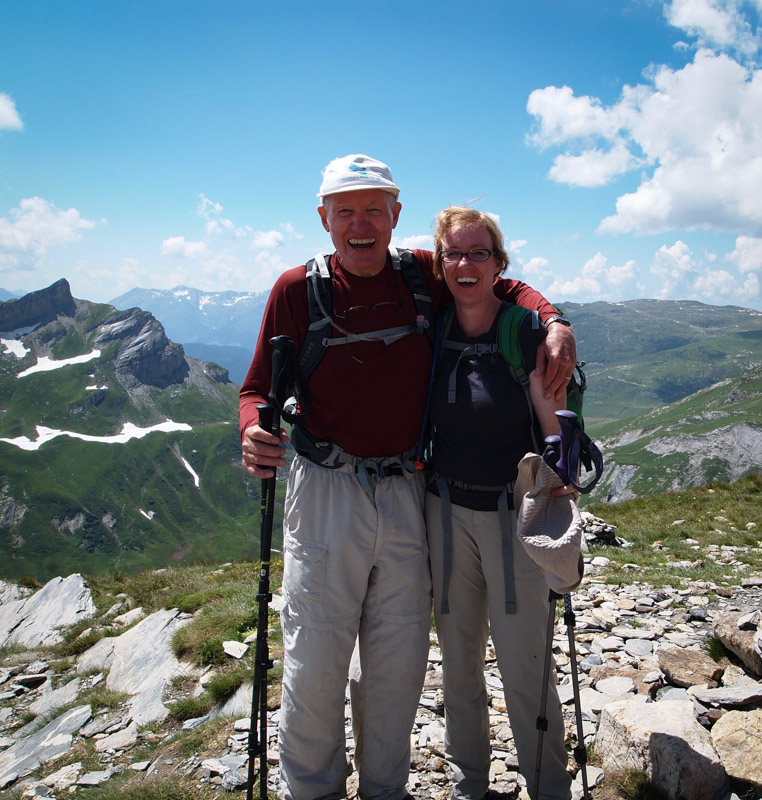 One of the many passes along the way Dad enjoying lunch and the view

Over the 11 days of hiking, I actually hiked 106 miles with total elevation climbed at 35,000 feet.  Wow!  I can honestly say it was one of the most difficult things I have ever done.  My time hiking Tour Mont Blanc was an amazing journey but also bittersweet.  I met some genuinely nice people, had the pleasure to hike with my father, to see stunning scenery that I have not seen anywhere else before, and be challenged.  However, I found myself wishing that I could share this adventure with Sydney and Jason.  Despite not being able to share this adventure with Jason and Sydney, words cannot even begin to express how grateful I am that my dad gave me this opportunity.  Thank you dad for being willing to share this adventure with me! What an adventure it was. 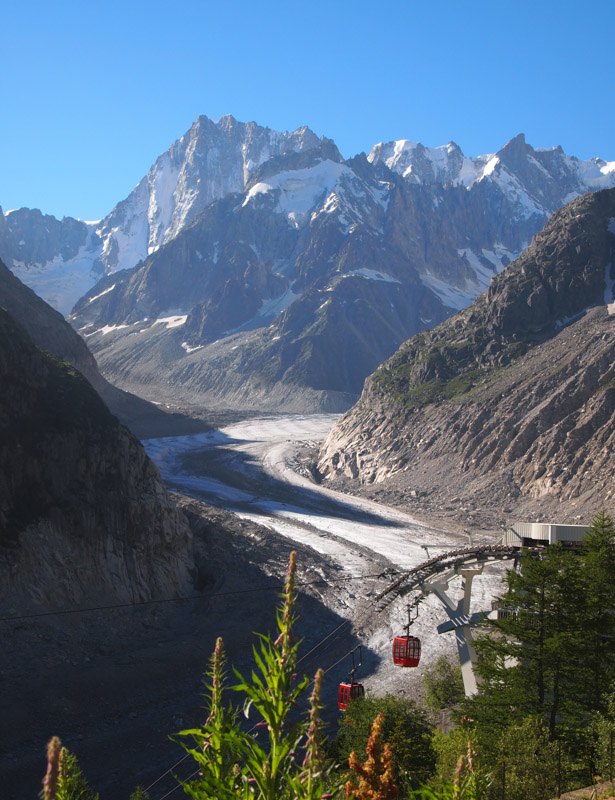 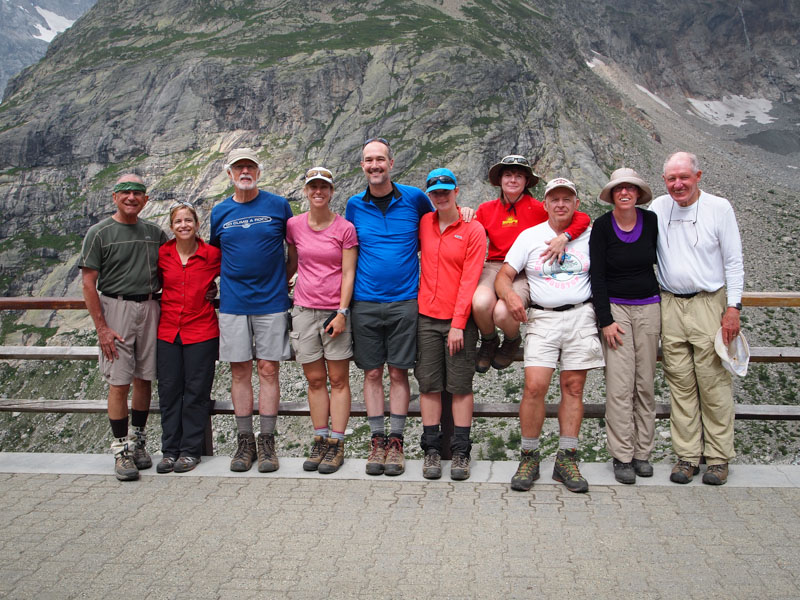 The Fathers and Daughters 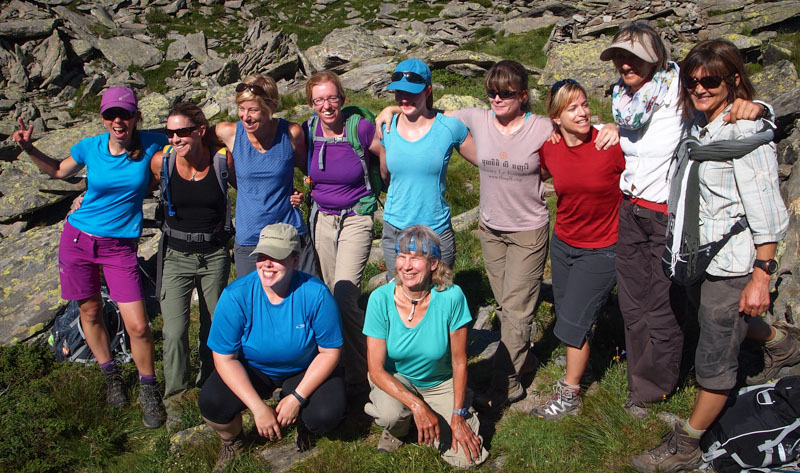 The girls and our wonderful guides 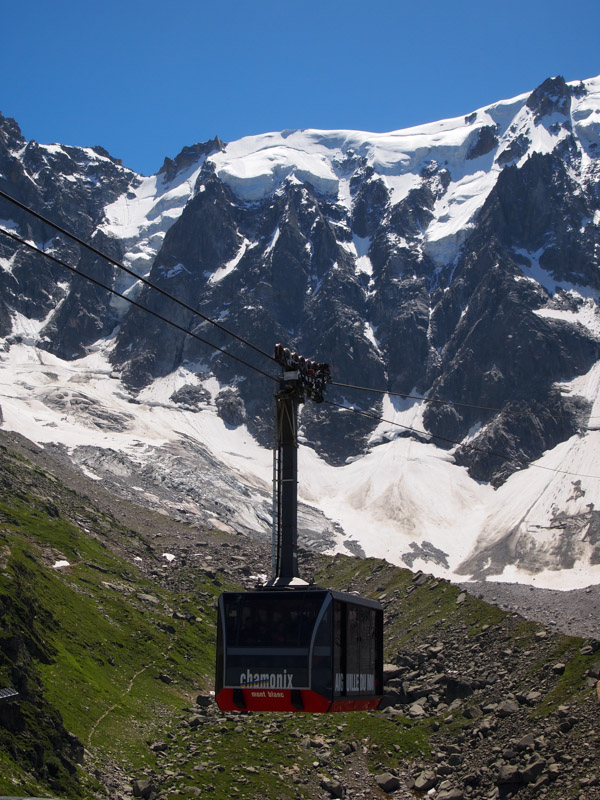 Cable Care with Mt Blanc in the background

After nearly 13 happy years of marriage, my wife is leaving me. After traveling halfway around the world on the trip of a lifetime she has decided that she will be leaving our 8-year old daughter and myself to go join an older man. We will miss her dearly, but we are also excited for her.

And before you drama queens get all excited and start jumping to conclusions, Kerri will be meeting up with her father in July to go on a 13-day hike in Switzerland.

We had to alter our schedule a bit, but it will actually work out for the better. We are now planning to spend a week in Amsterdam in early June followed by a week in Berlin, a week in Prague, and then 6 weeks in Italy.

While in Italy, Kerri will hop on a train in late July and head to Switzerland leaving Sydney and I to fend for ourselves for 2 weeks. Hopefully we can find a nice Italian villa close to the beach so Sydney and I can enjoy the Italian beach life. I already have the Ray-Ban sunglasses, but maybe I should start shopping for a Speedo now so I don’t stand out. Board shorts scream “tourist!”

During the hike, Kerri and her father will circumnavigate Mont Blanc, one of Europe’s highest peaks. This hike is hailed as one of the world’s most classic hikes with awe-inspiring views and border crossings on foot. They will trek for nearly 100 miles over 13 days at an altitude ranging from 6000 to 9000 feet above sea level.

Kerri has already started training by walking up and down the 14 flights of stairs at our apartment building. And get this; she barely breaks a sweat doing it. After 3 months of walking everywhere and going up and down lots of stairs, we are in excellent shape!

Hopefully, Kerri will be able to update everyone about hiking the Swiss Alps. We would love to be there with her, but we will be busy blogging about the Italian Beach life!