In America, everything is big. Big houses, big cars, and even big box stores. We’ve all heard that everything in Europe is smaller, especially the apartments. When we were looking for a place to stay for a month the options included spending $10,000+ a month for an American size apartment, or much less for a European sized one. We opted for the cheaper European version and spend the money we saved on traveling longer.

When we initially walked into the apartment after climbing the 6 flights of stairs, we were shocked at how small it was. To be honest, over our month there we often felt like rats trapped in a tiny cage. But after talking to other people, we soon realized that our “tiny apartment” was actually big. You see, the minimum size for an apartment in Paris is 7 square meters, which is 75 square feet. Can you imagine living in an apartment that was 7 1/2 feet wide by 10 feet long? That is smaller than one of our “small bedrooms” in our house back in Portland. In talking to one person they said that when their sleeper sofa is opened up they have a tiny bit of space on each side of the bed. Yes, their apartment is about the size of a bed. After hearing that, we were grateful that we had a loft and high ceilings. Grateful that we had a view of the Eiffel Tower and lots of light from the windows. Our apartment didn’t seem so small anymore.

So, before leaving Paris Sydney wanted to give a tour of our apartment and the stairs we had to walk up and down daily.

This past weekend we went yurt camping at Nehalem Bay State Park on the Oregon Coast. Driving towards the coast Friday night we hit rain and the rain continued all Friday night and all day Saturday leaving us trapped inside the yurt. To entertain ourselves, I set up the camera on the tripod and asked Sydney to make an improvisational movie. She made four movies that are very entertaining and just in time for Halloween.

On Sunday morning we awoke to sunshine, which is a rarity on the Oregon Coast. We spent the morning walking on the beach and sand dunes and then spent the afternoon crabbing off a dock in Nehalem Bay. We did not catch any crabs that were keepers, but some kind boaters pulled up and handed us a huge crab that they had caught, but didn’t want to deal with cooking it.

Here are the movies that Sydney made. And for added entertainment, I highly recommend playing all 4 videos at the same time to see a glimpse of what it would be like raising quadruplets. Enjoy!

As I fell from the Tarzan Swing tower, I had to wonder. What exactly did they mean when they yelled, “Not yet, don’t go!”

The grand finale of the zip line canopy tour at Selvatura Park in Costa Rica’s Monteverde Cloud Forest was the Tarzan Swing. As we hiked along the jungle trail after the last zip line section everyone in our small group wondered what the details of this final adventure would entail. The guides had told us that the swing was optional and nobody had to go if they did not want to. I think that caused us all to panic a little more. After zooming along at high speeds above the tree canopy, we were being led to something that was more extreme? 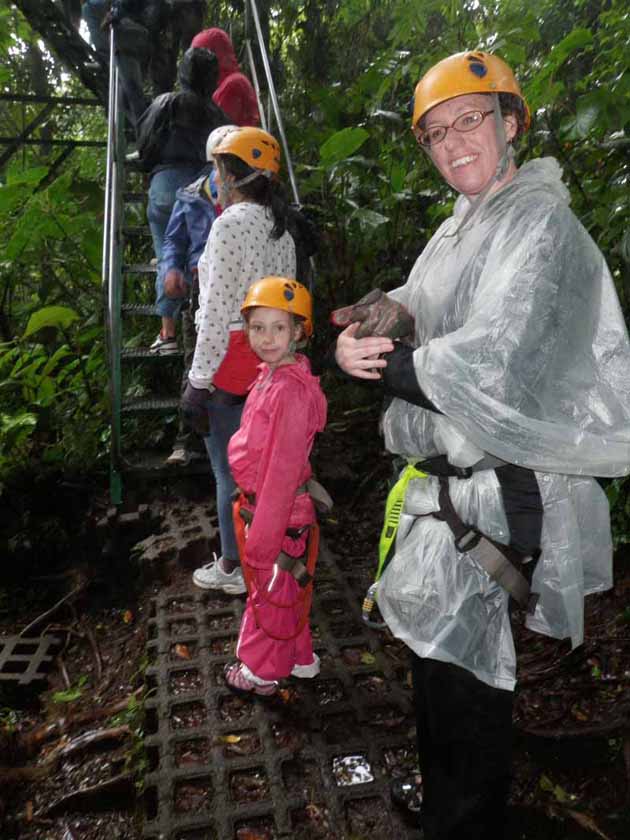 Waiting in line for the Tarzan Swing

As we reached the high tower for the Tarzan Swing we understood what we were to do. A rope was tied to a top branch of a massive canopy tree what seemed to be 100’s of feet above the ground. The rope was attached to our harnesses and we were to jump off the tower free falling briefly before arcing out over the jungle and then being slowed down and caught by the rope handlers below. Simple, right? Since everyone felt like seasoned adrenalin junkies after zip lining, nobody opted out. We were determined to do this, even if it killed us. We lined up on the tower steps and I ended up being the last in line. Lucky me!

As I watched the others in our group show massive anxiety as it was there turn to jump, I had to wonder how our 6-year old daughter, Sydney, would react to this. She had done fantastic on the zip line tour, but could she jump from the tower? Human instinct tells us to not jump from high places, but here we were, waiting in line to jump from a high place. Would we need to push her? Would she need psychiatric help later in life? As Sydney’s turn came, she bravely stepped onto the top platform and had the guide attach her harness to the rope. Here is the video:

We were a little shocked when instead of opening the gate like the guide had done for the others, he just picked Sydney up and dropped her off the tower like a sack of potatoes. Watching your daughter get dropped off a tower was a little unnerving. After all, it is our job to protect her from harm, yet, here we were paying people to drop her off a tower.

Next was Kerri’s turn. Here’s the video:

Unfortunately, since I was last in line and had the camera, nobody could take a video of my plunge. As stepped onto the top platform the guide tied the rope to my harness and opened the gate. He told me to step forward and my feet were literally half off the edge. I had psyched myself into doing this jump and had told myself repeatedly to, “Just get up there and jump!”  Fear is mental, and if you keep thinking about the “what if’s” you will experience fear and anxiety. The two guides down below screamed, “Not yet, don’t go!” and I jumped. As I fell I wondered what they had meant by, “Not yet, don’t go!” Would I splatter against the ground? Would the rope snap and I would end up being flung out into the jungle? Would I hit the tower on the return? Whatever was to happen would happen, so I decided to just enjoy it.  As I fell I slowly began to swing out and the guides jumped out of the way. I sailed past them and out over the jungle and swung back towards the tower. Not hitting the tower on the return was a relief and the guides slowed me down until they could completely stop me.

Once back on the ground they asked, “Did you have a good drop?”

They laughed. I still don’t know why they told me to not jump.

After returning to the group I learned that I had come to within 2 feet of hitting the ground. Plenty of room! Sydney was very excited and said she could do the Tarzan Swing all day long. This was by far the best adventure she had ever had. As for Kerri, she said that she would never do it again. We will have to see about that…