Upon waking from a brief nap and still feeling the effects of a long sleepless flight from the night before, I didn’t want to do anything but go back to sleep. I am not the most pleasant person to be around when sleep deprived and according to my daughter I sound like, “Rar, Rar, Rar” when in that state. But the best cure for jetlag is fresh air and sunshine, plus we were only going to be in Monteverde for one night and wanted to make the best of it. So down to the front desk of the Rustic Lodge we went to discuss what to do in this hard-to-get-to dirt road town. We signed up for the Jungle Night Walk later that evening and since zip lining was high on our list, we arranged to be picked up the next morning to do that as well.

At 5 o’clock the shuttle van picked us up to go on the Jungle Night Walk and took us out into the jungle. You can’t have a Jungle Night Walk without jungle! As we waited for the walk to start a light rain began to fall. Coming from the Pacific Northwest, a little rain doesn’t faze us one bit and we were prepared with proper clothing and waterproof camera bags. But some of the others were only wearing sweatshirts. That was going to suck! Who goes to the “rain forest” with only a super absorbent sweatshirt? They must have been from Arizona! 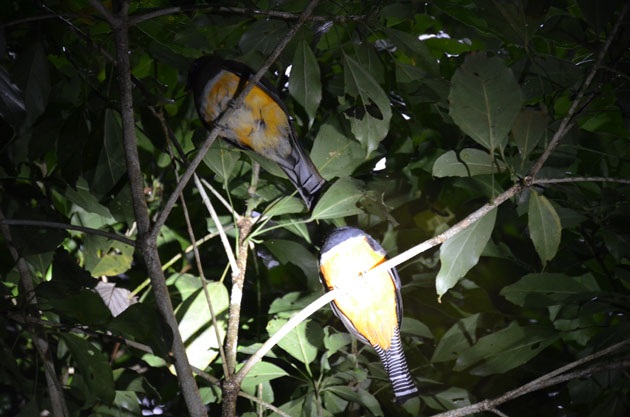 As the guild led us down the pathway the rain stopped and we all broke out our cameras in the hopes of spotting one of the promised jungle creatures. We saw an agouti, which is said to look like a bigger version of a guinea pig, but I thought it just looked like a giant rat. We also saw a white nosed coati and some birds trying to sleep that were not happy with us tourists shining flashlights on them and taking pictures. And then we saw the massive strangler fig trees, lots of leaf cutter ants, and then things got really fun. We experienced torrential rains. It was unlike any rain we have ever experienced before. It was a heavy downpour, but it did not go away in 5 minutes like it does in the Pacific Northwest. Nor 15 minutes later. Nor 30 minutes later. Nor an hour later. It just kept coming with lightening and thunder overhead. And then the path became a stream of flowing water causing our waterproof shoes to fill and then our breathable waterproof jackets started to seep water. We were all soaked to the bone and freezing, especially the ones wearing sweatshirts. The guide told us that the animals were not going to be out during the heavy rain, but since we had paid for a 2-hour guided hike, she was going to give us our 2 hours worth. It was miserable and we were worried about our cameras that we had been hiding under our jackets.

Soaked to the bone we loaded into the shuttle and were delivered to our hotel where we warmed up with hot showers and were relieved to find our cameras still functioning. We now know that anything that says “water resistant” or “breathable waterproof” or even “waterproof” is a lie! I think plastic bags would have worked better than our jackets did. So, before heading out on our RTW trip next year, we have some shopping to do for some REALLY good waterproof gear. And anyone traveling to the “Rain Forest” should always have at least a plastic poncho with you at all times. Because when it rains, it rains! And a sweatshirt just isn’t going to work very well.