If you find yourself in the far northwest corner of Costa Rica in the Guanacaste Province and need something to do, as we did, the guide books will tell you to go check out Santa Rosa National Park. So, we did.

Costa Rica does not currently have a military, but they have battled invading armies. And each time they met the invaders, it happened at the location of the Santa Rosa National Park. The first time was in 1856 when an ambitious American, William Walker, decided to establish an English speaking colony in Central America and invaded at this very spot. The local militia battled William Walker and after a whopping 14 minutes of hard battle, won. The other two battles came in 1919 and 1955 when Nicaraguan invaders attempted to oust the current leaders at that time and were also defeated. Good times!

We drove up to the entrance to the Santa Rosa National Park behind two guys on a small dual sport motorcycle carrying a surfboard. I got out and asked them if the surfing was good here, and they said it was really good. Just to the north of Santa Rosa is an infamous spot, Ollie’s Point. Ollie’s Point was named after and made infamous by the US Military General Oliver North who used that spot to smuggle weapons into Nicaragua in the 1980’s. It was made famous by the surfing documentary Endless Summer II and is a popular destination for surfers from all over the world. I would have loved to check out Ollie’s Point, but it is only accessible by boat.  After paying our entrance fee and getting a map of the park, which is rather large and spread out, we made our way into the tropical dry forest of Santa Rosa.

After viewing the war memorial, the hacienda, and photographing numerous iguanas we decided to be a bit more adventurous and head down an 8-mile long rugged dirt road to Naranjo Beach. The guidebook warned against it, but what do guidebooks know! We had a compact 4-wheel drive rental car; we could go anywhere. The road started out not too bad, but soon became very bumpy with large rocks threatening to rip off some important car part from the underside. The further we went the rougher the road became and we soon realized that this would be a very bad area to have a breakdown. It was the dry season and it was rough, but there is no way this road would be passable during the rainy season unless you had some giant off-road Tonka truck with massive knobby tires and a snorkel.

After a few bumpy miles we came upon a group of teenage students walking down the road carrying 2-liters of Coke and other soft drinks. Not the best choice for staying hydrated, but at least they had something. We couldn’t believe that they were actually walking all 8-miles in the 100 degree heat. The students were well spaced apart along the road and we waved as we slowly passed each one checking to make sure that none of them were on the verge of heatstroke and needed a ride out. But they just smiled and waved back. And then we came upon 3 guys that stuck there thumbs out hoping to hitch a ride. We stopped and they opened the back door and squeezed in next to Sydney’s full size booster seat. Sydney thought it was the funniest thing to have 3 teenage boys piled in the backseat with her. They spoke no English, but we could tell that they were happy to be out of the heat and would not have to walk the last mile or two, even if that meant sitting on each other’s laps. We continued down the road passing other students as the boys in the backseat smiled and waved to them in a teasing way. The road soon became so bad that I was worried that with all of the extra weight in the car we would rip off the oil pan or exhaust if we hit a rock just right. The suspension was bottomed out so I carefully and slowly drove around each rock sticking up and crater in the road cringing each time we bottomed out and praying it was not something critical. We eventually reached the parking area for Naranjo Beach found a number of other students and a teacher waiting for the rest of the group to arrive. They were shocked to see the 3 boys climb out of our car.

The heat was oppressive! They allowed camping at Naranjo Beach, but I could not imagine camping there in that heat. We walked down the short trail to the beach and were impressed with its beauty. A perfect beach break with not a single other person in sight. We quickly walked over the searing hot sand to the water expecting to find relief in the cool waters of the Pacific Ocean. Instead, we found warm bath water.

We thoroughly enjoyed our day at Santa Rosa. We were hoping to see lots of the wildlife that is found in tropical dry forests, but all we saw were iguanas and a couple of deer. But even without the wildlife the park offered a lot in Costa Rica’s history and its natural beauty. So, if you find yourself in Costa Rica’s Guanacaste Province, don’t forget to visit Santa Rosa National Park. And unless it’s the rainy season ignore the guidebook warnings about the road to Naranjo Beach; it’s only a rental. 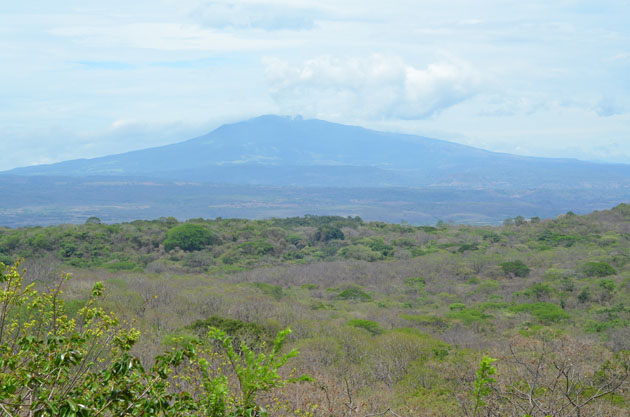 View of Santa Rosa National Park from an overlook 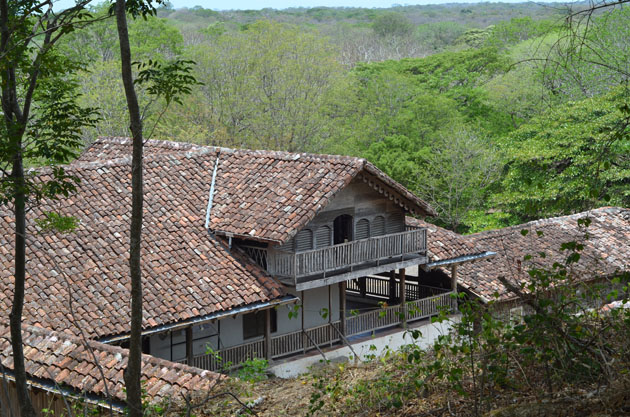 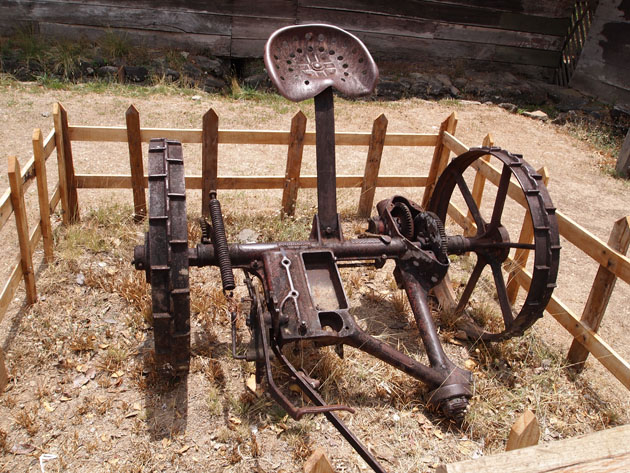 Old tractor at the Hacienda 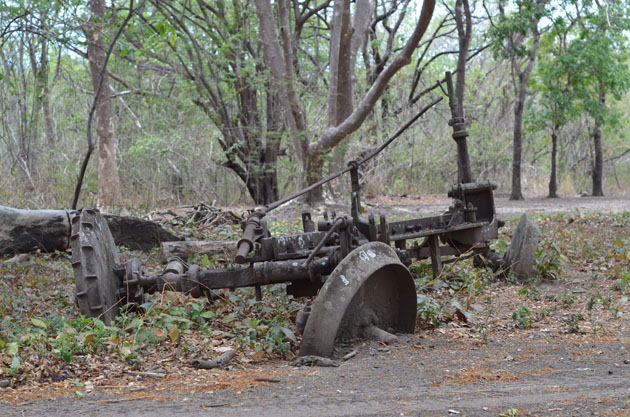 Nicaraguan tank from the 1955 battle 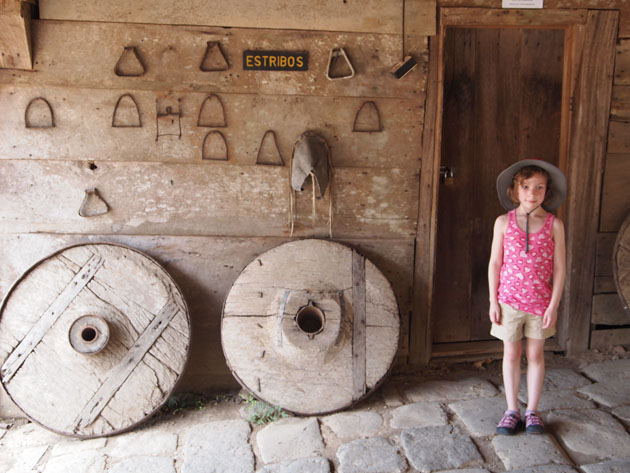 Sydney at the Hacienda forced to pose with old wheels 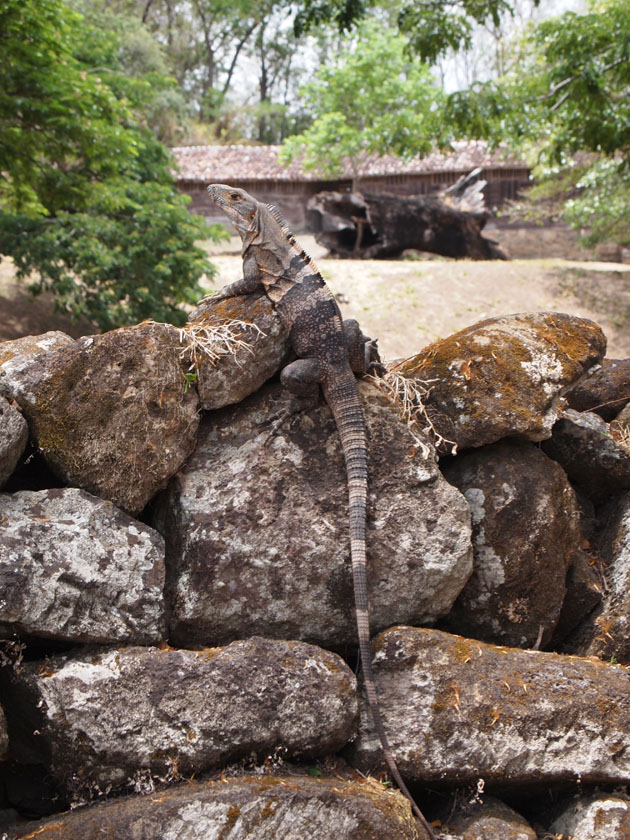 One of many iguanas at the Hacienda 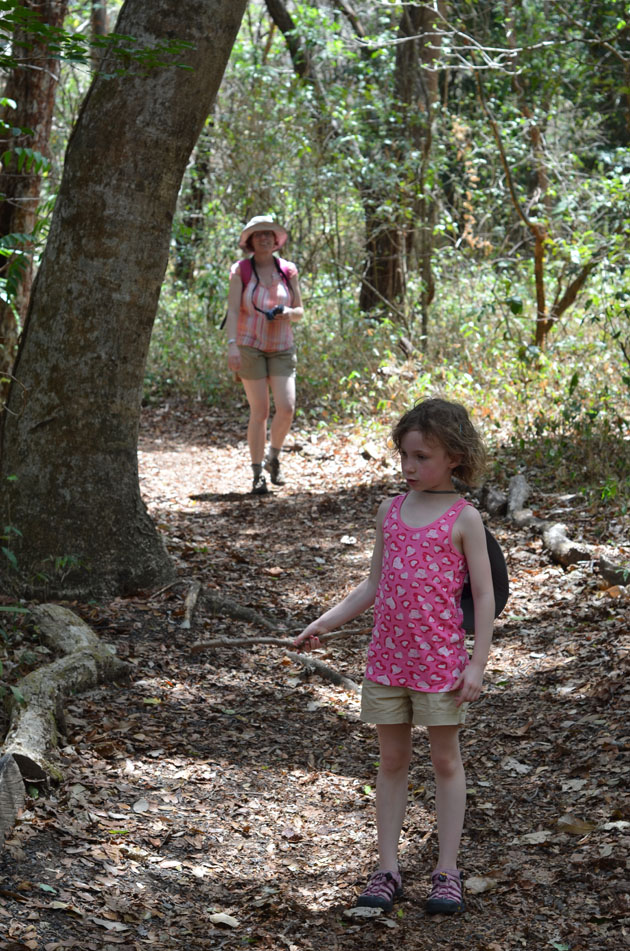 Kerri and Sydney hiking in the tropical dry forest 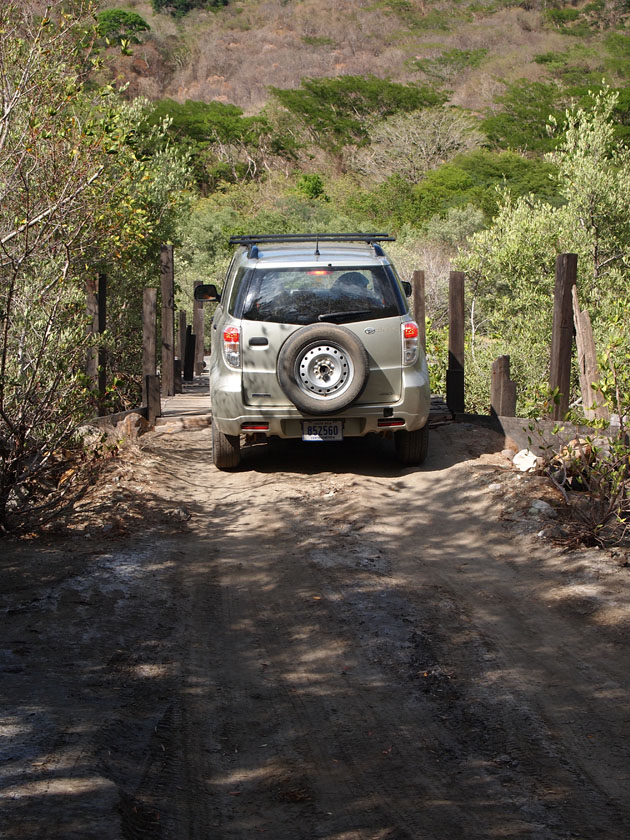 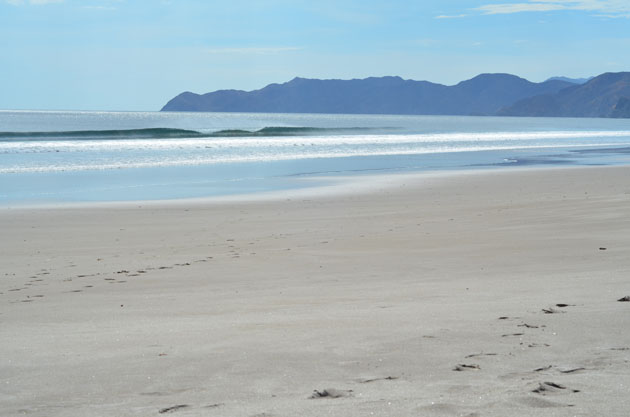